With the close of the public comment period having come on May 25th, the much awaited announcement of the final form of FERC’s pending policy guidance would seem to be imminent. The final form of this revised guidance is likely to spell out how FERC will approach its evaluation of newly proposed energy projects with regard to both greenhouse gas emission impacts and economic need. This has understandably been the subject of intense interest and speculation. However, a more subtle development has emerged in recent months that also has the potential to significantly alter the Commission’s criteria for issuing project approvals. Specifically, two pending FERC dockets have seen requests for interventions from high-profile governmental entities seeking to block approval for proposed pipelines. The requests are based upon new arguments that the projects have not adequately demonstrated an economic need and/or would violate statutory state climate targets. In today’s Energy Market Insight, we will examine these arguments and assess the likely federal and state regulatory impacts that would occur if FERC were to accept these new criteria as valid and deny approval for either of the pipelines in question.

The first requested intervention of note occurred in FERC proceeding CP21-94, in which Williams is seeking approval for its proposed Regional Energy Access Expansion (REAE) project. As proposed, this project would provide an additional 830 MMcf/d of capacity to serve end users primarily in New Jersey markets. In a joint filing on July 11, 2022, the New Jersey Board of Public Utilities (the regulator of all electric and gas utilities in the state) and the New Jersey Division of Rate Counsel (a ratepayer advocacy agency) sought intervenor status in order to lodge a commissioned study from a major economics firm into the proceeding. The study concluded that under “most scenarios,” New Jersey could “easily meet firm demand” through 2030 without incremental pipeline capacity. As such, the intervening parties argue that, on the basis of the filed study, the Commission should reject REAE’s application on the grounds that the project does not serve an economic necessity.

The second intervention of note occurred in FERC proceeding CP22-2, in which TC Energy is seeking approval for its proposed GTN Xpress project. GTN Xpress would eventually add 250 MMcf/d of additional capacity through compression upgrades and additional gas cooling stations in Idaho, Oregon, and Washington. The initial application with FERC seeks authorization for the first 150 MMcf/d of this incremental capacity. Following the release of a generally favorable project environmental impact statement (EIS) by FERC staff, the Attorneys General (AGs) of California, Oregon, and Washington filed jointly to request intervenor status in the proceeding on August 22, 2022. In this filing, the AGs argue that the proposed expansion violates state energy policy for three of the four markets that the project would serve, is not economically necessary, and may result in existing customers subsidizing the project.

While the filings in both cases were out of time and, at the time of writing, FERC has yet to issue a ruling in either case granting the requested intervenor status to the filing parties, it may be difficult for FERC to ignore the stated public opposition of New Jersey’s utility regulator and three AGs to the REAE and GTN Xpress projects, respectively. Absent any other reason, the requested interventions in the REAE and GTN Xpress cases would be notable simply for the prominent stature of the protesting parties. However, the potential impact of the interventions becomes even more pronounced when the precedent agreements with shippers filed in each case are examined closely. 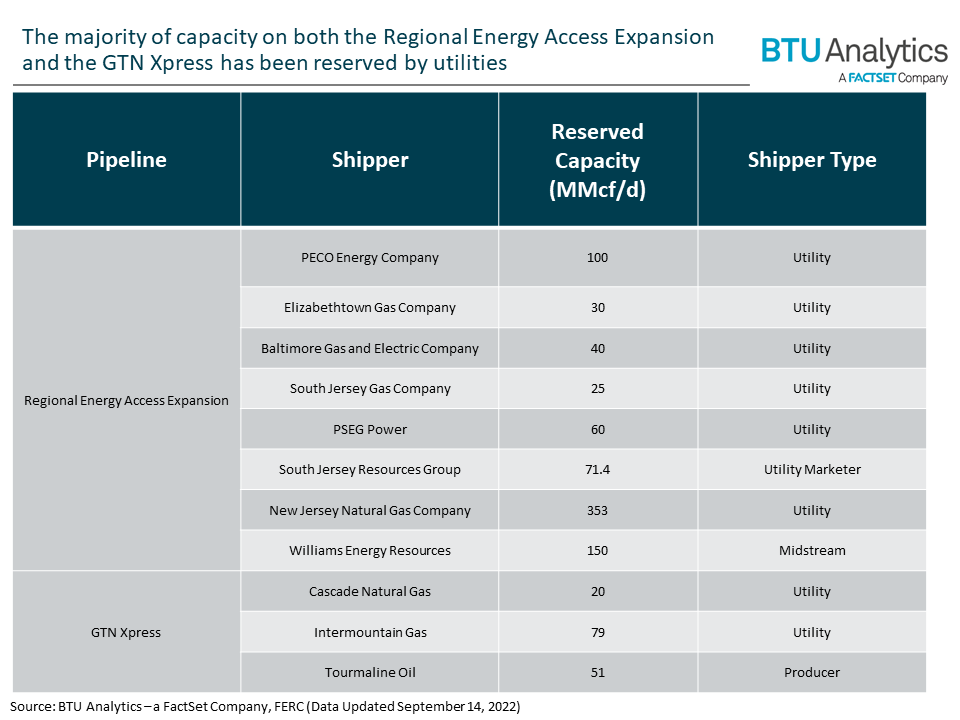 For both projects, a large majority of the planned capacity has been reserved by utility shippers. In the case of REAE, five New Jersey utilities, an affiliate of a NJ utility, and Baltimore Gas and Electric have all reserved a total of ~679 MMcf/d (82%) of the project’s total capacity. In the case of GTN Xpress, Cascade Natural Gas of Oregon and Intermountain Gas of Idaho have reserved ~100 MMcf/d (67%) of the 150 MMcf/d expansion that TC Energy is seeking approval for in its initial FERC filing. The makeup of the precedent agreements for each of these projects makes the opposition from the New Jersey regulators and the West Coast AGs even more remarkable for several reasons.

First, both opposition filings inherently ask FERC to set aside the usual standard for evaluating a project’s economic need and apply a revised criterion. Both pipelines are fully subscribed for the portion of capacity for which the project sponsors are seeking approval. Traditionally, FERC has determined economic need almost exclusively on the basis of the existence of binding precedent agreements – a framework under which both pipelines would easily qualify. Further, in both cases, the intervenors ask FERC to essentially rule that the utilities signing the cited precedent agreements are mistaken in their determination that additional capacity is needed. In the case of GTN Xpress, the AG’s filing goes as far as to call Cascade Natural Gas’ demand forecast methodology “overly simplistic” and assert that Intermountain’s precedent contract simply replaces another contract on an existing pipeline, thereby rendering its capacity need moot. In the case of REAE, the study filed by the NJ regulators argues that sufficient pipeline capacity into the state exists through at least 2030 despite five of the state’s largest utilities indicating their perceived need for long term capacity by signing 30-year agreements for a collective 550+ MMcf/d of additional capacity. In short, the Commission is being asked in both cases to essentially nullify key outcomes of the resource planning processes of eight utilities in four states that all determined the need for additional gas capacity from the proposed projects. Finally, and perhaps most significantly, FERC is essentially being asked in both cases to determine that state climate goals, which mandate an overall reduction in natural gas usage, remove the need for additional gas infrastructure in all of the states in question. Reductions in overall usage due to climate goals are a key assumption in the study filed in the REAE case, and the AG filing in the GTN Xpress case explicitly asserts that “state energy policies drive the need for gas in the region.”

While the interventions from high-profile governmental entities are currently limited to these two dockets, an examination of other pipeline projects currently awaiting approval reveals that the determinations made by FERC in the REAE and GTN Xpress dockets could have consequences far beyond the fate of these two projects alone. Other non-LNG related projects with at least 100 MMcf/d of incremental capacity currently awaiting FERC approval are summarized below. 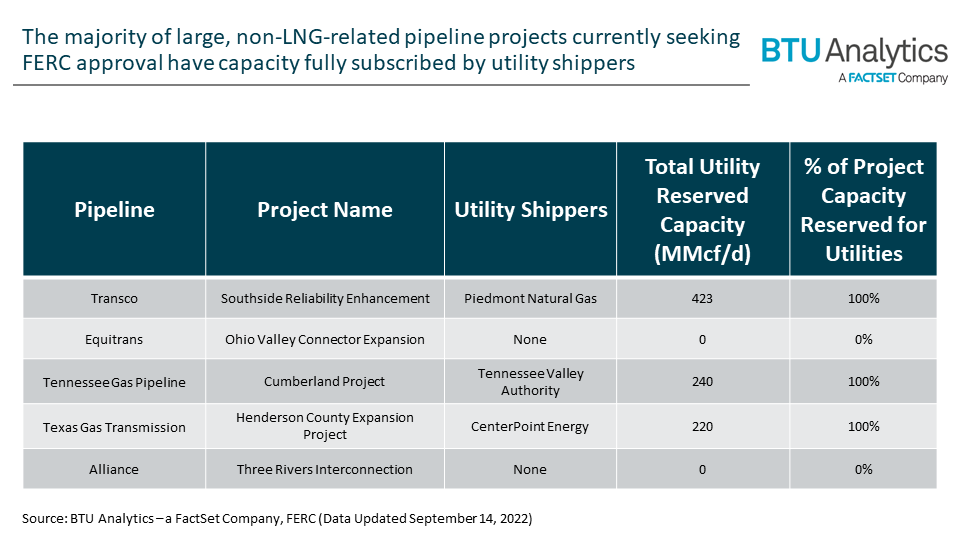 Two of the five projects are not sponsored by utilities. The first, the 330 MMcf/d Equitrans Ohio Valley Connector project, is fully subscribed by natural gas producers. The second project, on Alliance, would add a connection to the Competitive Power Ventures Three Rivers Natural Gas Power Plant. While not a utility project, it fits in line with two of the three additional projects subscribed by utilities. The Cumberland and Henderson County Expansion projects are designed to supply new natural gas-fired generation that is largely being built to offset retired coal capacity. In the case of Williams’ Southside Reliability Enhancement, capacity is fully subscribed by Piedmont Natural Gas and would serve customers in North Carolina, South Carolina, and Tennessee. If FERC determines that the intervenor’s arguments discussed above in the REAE and GTN Xpress cases are persuasive, a number of these additional pending projects could also be vulnerable by the same logic, as they are largely also designed to serve capacity needs identified in a utility resource planning context.

While the impacts of the high-profile interventions in the REAE and GTN Xpress cases are uncertain at best, the issues raised could have far ranging consequences depending on FERC’s ultimate decisions. If even the remediation of utility supply shortages determined during resource planning processes is insufficient in establishing the need for additional natural gas infrastructure, it is difficult to envision what criteria the Commission would find persuasive. In addition, if precedent agreements are now deemed insufficient to establish economic need – even for currently pending project applications ostensibly subject to the existing FERC rules, then the path to approval for projects will likely become much more complex, time consuming, and uncertain. In any case, both dockets merit close scrutiny, as they are likely to yield substantial clues as to the overall federal regulatory environment facing proposed gas infrastructure projects in the coming months and years.

Mr. Jon Bowman is an Energy Analyst at FactSet. In this role, he focuses on natural gas economics and basis forecasting. Prior, he held several positions related to resource planning, forecasting, and pricing analysis in the utilities and manufacturing industries. Mr. Bowman earned a B.S. in Mathematics from Tulane University and an M.S. in Industrial Engineering from the University of Illinois at Urbana-Champaign.