In 2021, $582.1 billion of apparel and footwear-related goods were manufactured and exported worldwide according to data from United Nations’ Comtrade database. The Asia Pacific region was responsible for 61% of that global export activity. Previously, we examined the sales performance to date for Asian apparel and footwear manufacturers as well as analysts’ expectations for sales growth over the next three years.

Here we explore the corporate balance sheet in more detail to better understand how the pandemic period has changed the structure of corporates’ financial position.

Looking at the most indebted corporates across the Asia region, we can see that debt in the pre-pandemic years grew steadily. As 2020 took its toll on corporates, new debt was added to the balance sheet in a bid to shore things up. Across Asia, debt grew by 18% in 2020 and 21% in 2021. 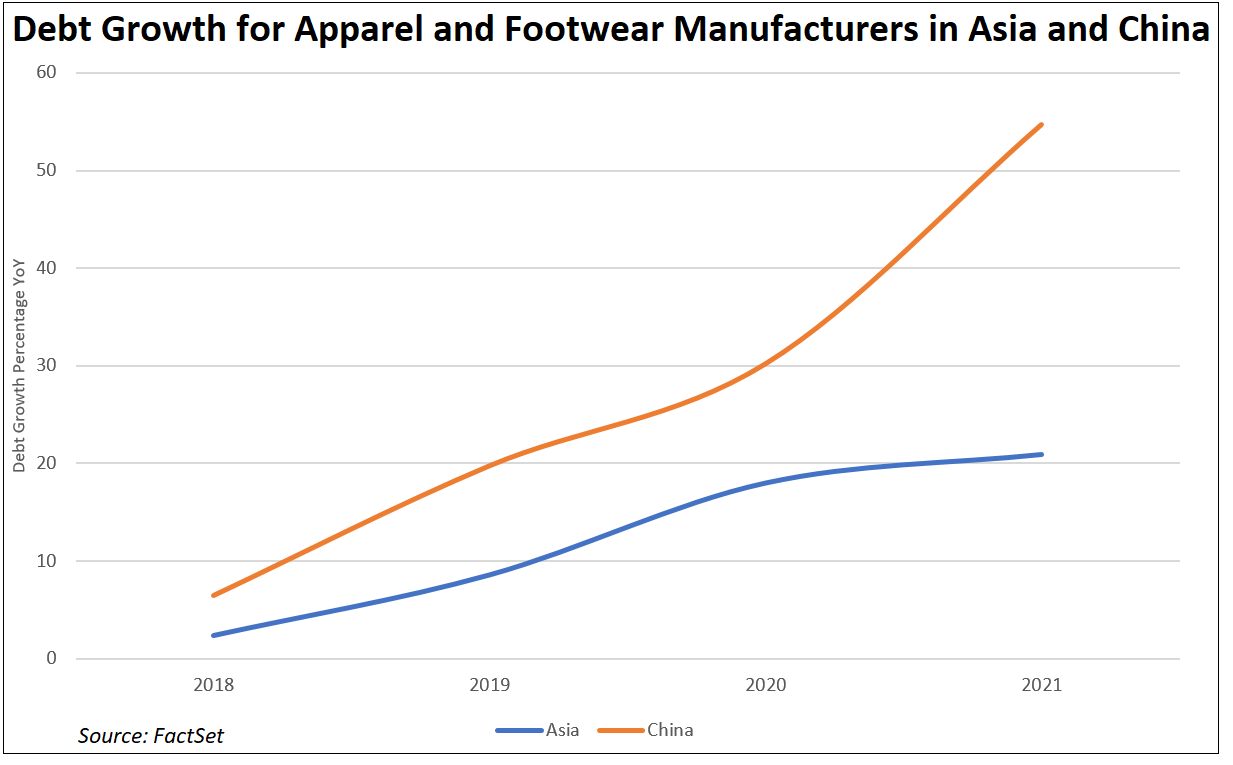 If we look at the compound effect of debt since 2017, corporate balance sheets have seen debt grow by nearly 60% across the region.

China corporates are the most indebted within the region, and they have been more aggressive with the new debt they have taken on compared to the regional benchmark. Debt for these corporates grew by around 7% in 2018 and nearly 20% in 2019. 2020 saw this new debt jump again by just over 30%, and a staggering 55% additional new debt was added last year.

While this new debt may have addressed an immediate day-to-day trading need, the long-term impact needs to be carefully considered along with a plan to unwind it over time. What strategic investments will now have to take a lower priority and how will this impact companies’ revenues overall?

When looking at the most liquid corporates in Asia, a lot of corporates were consuming cash before the pandemic. However, during the pandemic, significant amounts of cash were added to the balance sheet. Asian manufacturers saw most of this cash injection happen in 2020, but corporates in China and Hong Kong deployed more cash in 2021. 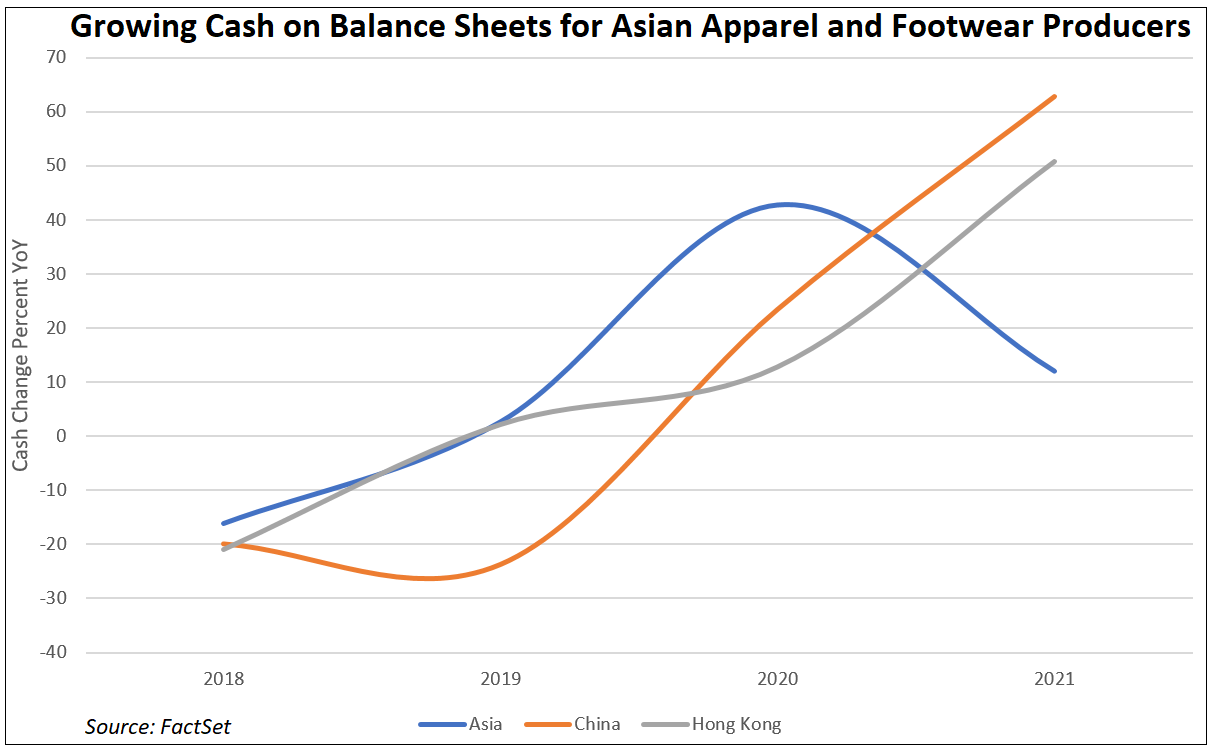 The overall Asia benchmark saw a stabilization of new cash deployed to the balance sheet in 2021. This may indicate that corporates achieved the liquidity they believed they needed. While some of these percentages seem large, when the cash reserves are expressed as a percentage of sales, the level is generally in line with that seen in 2017. This is mostly due to the uplift in sales in 2021.

The working capital equation is 80% operational in nature. Robust work practices that are constantly being reviewed and adjusted are key to remaining competitive. While bank products have helped relieve some pressure and create capital for the balance sheet, the responsibility for efficiency remains with the operational teams. This includes everything from basics such as ensuring the inventory is held for the shortest amount of time to getting paid quicker from your buyers than the time it takes to pay your suppliers.

This operational efficiency relieves capital pressure on the balance sheet, which can be critical if the business is in growth mode. If the corporate has to pay its suppliers before getting paid by the buyers, the balance sheet will consume cash. Getting the working capital dynamics right is fundamental to the creation of a stable environment for the corporation to operate from.

The chart below shows the median performance across Asia for all three core working capital metrics: Days Sales Outstanding (DSO), Days of Inventory Outstanding (DIO), and Days Payables Outstanding (DPO). The first thing that stands out is inventory for these manufacturers has increased consistently since 2018—and inventory is being held for a significant period. Behind the scenes, most of this inventory is raw materials that suppliers are required to hold to meet the tight order deadlines from some of the major brands. 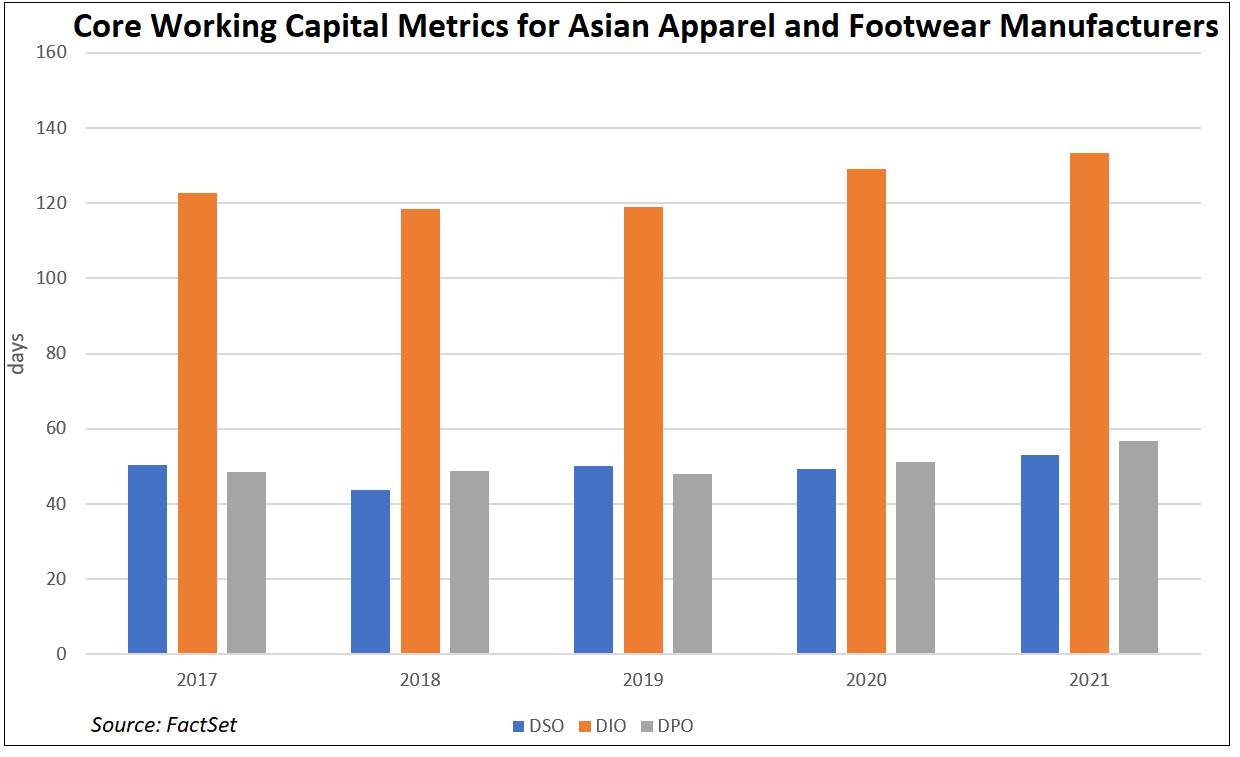 The increases since 2020 should not be a surprise given the disruption to the retail sector for this industry. While the median for the region has seen an increase of just a few days over the last two years, the data for China tells us that these manufacturers have seen inventory rise by 33 days.

When we look at the time it takes to pay suppliers, median terms have increased from 51 days in 2020 to 57 days in 2021. If we then consider the region across all industries, we have seen supplier payment terms reduce from 57 days to 49 days across the same period. The move against the regional trend may indicate how much stress these manufacturers were under during the pandemic period. Reducing supplier payment terms will generally consume capital from the balance sheet but it may help to ensure your supply chain has healthy liquidity.

The same trend has occurred with buyer payment terms. For this industry across Asia, sellers have waited four days longer to get paid between 2020 and 2021, whereas the region across all industries has seen suppliers get paid 10 days quicker over the same period. Getting paid quicker eases capital pressure on the balance sheet.

Once the dust has settled and the manufacturers can come up for air once again, a proper review of their working capital performance should be carried out. A drive towards working capital efficiency and optimization must be made a priority given the condition of the balance sheet. Driving the business towards a model where they get money in from their buyers quicker than money goes out to pay suppliers will provide immediate relief and headroom to help grow the business again.

The interest rate landscape is changing daily. We’re seeing real-time changes both in the raising of rates and the end-of-year projections. There is little confidence in rates being as low as currently projected when we get to the end of the year.

The inflationary pressure that governments are under is unprecedented in recent times and interest rates are one of the only key tools available to control them.

There are three main issues created when interest rates start to increase:

Those suppliers based in mainland China will more than likely have a lot of their borrowing in renminbi and the China rate projections are relatively modest. That said, it is this group of suppliers that have taken on the largest amounts of new debt over the last couple of years.

The manufacturers most at risk are those with short-term U.S. dollar borrowings. Manufacturers that have opted for long-term debt have potentially been able to negotiate fixed-rate borrowing costs.

We entered 2022 with a U.S. Fed Funds rate of 0.25%. Over the last three months we have seen three rate increases, with the increase in June being the largest at 75 bps. The rate at the time of writing is 1.75% with the market expecting another 75 bps hike on July 27. The consensus estimate has the Fed Funds rate at 3.5% at the end of 2022 but this has been a moving target so far this year.

To put this into context, the most indebted corporates in China have seen an average increase in debt of $87.3m over the last reporting period. If this was all denominated in U.S. dollars and the loan was at base + 175 bps, at the start of the year this new debt would cost $1.75 million in interest expenses annually. At today’s rate, this has increased to $3.1 million annually; if rates hit 3.5% at the end of the year the costs would be $4.6 million annually.

Since the start of the year, to the projections at the end of the year, the U.S. dollar base rate will cost an additional $2.8 million in interest expense—and this is just the cost of the new average debt.

In the next article in this series, we will look at recovery options and propose some high-level boardroom agenda items that corporates should be prioritizing.

Other articles in this series:

Mr. Daniel Cooper is the founder of Alba Capital, based in Hong Kong, China. In this role, he helps corporates in and around Asia Pacific understand the working capital optimization options from the rarely considered aspect of operations. Prior, Mr. Cooper held various roles during his 24-year tenure at HSBC helping corporates worldwide in their working capital journeys. In the latter part of his career, he was the Global Head of Supply Chain Finance and the Asia Head of Working Capital Advisory. Mr. Cooper earned a Bachelor of Science (BSc) in applied software engineering from UCE (now Birmingham City University).