How Many S&P 500 Companies Are Seeing a Negative Impact from the Government Shutdown?

During each corporate earnings season, it is not unusual for companies to comment on subjects that had an impact on their earnings and revenues for a given quarter or may have an impact on earnings and revenues for future quarters. Through Thursday (January 24), approximately 21% of the companies in the S&P 500 (106 companies) had reported earnings results for the fourth quarter. Given the government shutdown ( a short-term deal for which is on the table as of Friday, January 25), have companies in the S&P 500 commented on the “shutdown” during their earnings conference calls for the fourth quarter? 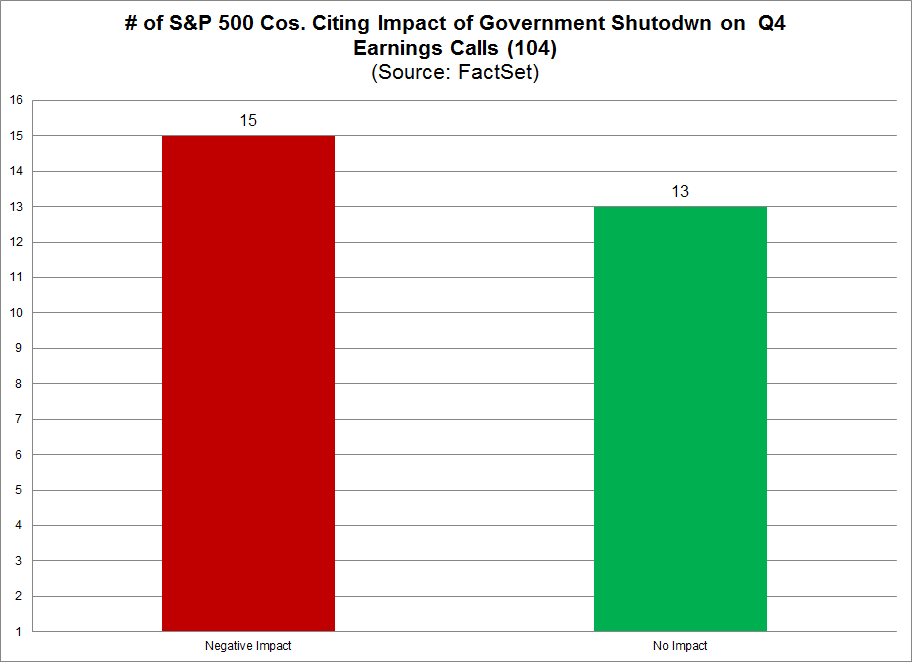 To answer this question, FactSet searched for the term “shutdown” in the conference call transcripts of the 104 S&P 500 companies that had conducted fourth quarter earnings conference calls through January 24.

Of these 104 companies, 34 (or 33%) cited the term “shutdown” during their earnings call. At the sector level, the Financials (11) and Industrials (11) sectors had the highest number of companies discussing “shutdown” on Q4 earnings calls. Combined, these two sectors accounted for nearly two-thirds of the total number.

Overall, 13 of the 34 companies that have discussed the term “shutdown” on their earnings calls saw no impact from the government shutdown.

What Companies are Saying?

“But for sure, if we don't see the ability to get approvals from the SEC on IPOs, to a lesser extent, some of the M&A deals that need approvals from government agencies, it will be problematic in the ability to see those activity levels play out and fees be realized. So, I mean, it's one of many things that would behoove us to end this sooner rather than later.” JPMorgan Chase (Jan. 15)

“Now with respect to the government shutdown, we are seeing some pressure on our business…The bigger impact is on our operation. With non-essential work at the FAA shutdown, our Airbus A220 start date is likely to be pushed back due to delays in the certification process.” -Delta Air Lines (Jan. 15)

“Before diving into the results for the quarter and our increased outlook for the full year, I'd like to provide a brief update on the upcoming Kontoor Brands spin-off. We filed the initial Form 10 registration statement with the SEC in mid-December. We remain on track for a public filing in early March. However, the government shutdown has the potential to delay the public filing.” -V.F. Corporation (Jan. 18)

“So, to answer the second part of question first, we have seen an impact, but it's not in probably the way that you might expect. We've actually won business, but there is no one in the central procurement agency to actually process the paperwork. And so, our guidance anticipates that this does not go on through the remainder of the quarter, but somebody is actually going to be there to process or we will find another route in which to process those orders. If we find that this continues to go throughout the quarter, we probably would expect some impact that is not anticipated in our guidance.” -F5 Networks (Jan. 23)

“I think we can have growth in M&A, whether we have growth in underwritings, it's – if the government stays shut down, that would be hard to do…So, but certainly if it stays shut down, it's going to have an impact…There will be probably some catch-up if the market's reasonable, if it opens up, but it's hard without the FCC, not too many people are going to issue with them closed.” -Raymond James Financial (Jan. 24)

“With SVB Leerink, we expect core fee income growth in the high-60s. This reflects our expectations of slow investment banking revenues in the first quarter due to the impact of the government shutdown on the SEC IPO review process.” -SVB Financial Group (Jan. 24)

“Our primary operational focus in the near term is getting that ETOPS authorization…But until the government shutdown ends, we are at a standstill. Now you may have heard that there was an additional FAA personnel authorized to return to work, but the work that they can do is limited to safety-specific activity. And certification of new or expanded operational capabilities it doesn't fall within that definition and thus the standstill. If the shutdown ends within a week, I think we have a reasonable chance of beginning service in the first quarter of 2019. Otherwise, it will likely be in the second quarter.” -Southwest Airlines (Jan. 24)

“We do have the largest exposure, the biggest presence in D.C. But as we said, it's hard for us to know what the impact is right now or what it's going to be or how long it's going to go. And really what we did is gave a wider range to reflect that uncertainty. Maybe after the quarter when it's all over, we'll try to look back and see what that impact was. But right now, we're not going to try to pin a number on it.” -United Continental Holdings (Jan. 16)

“We have seen some impact, but there is a lot of uncertainty as to kind of what's going to happen going forward. So, we have not yet put a dollar value on it. But what we've seen to-date is included in our guidance for the first quarter.” -American Airlines Group (Jan. 24)

“It is too early to know what the impact of the partial federal government shutdown will have on our economy. Federal government's share of unemployment across our territory ranges between 0.7% in Arkansas to 7.2% in Texas, with some portion of these numbers being unaffected military employees. The longer the shutdown lasts the higher impact we would expect to see in residential and commercial sales due to lower personal income and spending.” -American Electric Power (Jan. 24)

“I think noise is the right way to put it. I mean, it is a headwind. If you look at it specifically, within our public sector business, state and local are a much larger parts for Citrix than Federal, but I think it's reasonably to us – reasonable at least to assume that there's going to be some broader impact at some point. I mean, I can't point to it quantitatively, but qualitatively there's conversations that everyone is having just trying to understand the potential impact on their business, whether it's from U.S. shutdown, whether it's from global changes with Brexit or whether it's things like ongoing political volatility.” -Citrix Systems (Jan. 24)

“Now with respect to the government shutdown, we are seeing some pressure on our business. On the revenue front, we're experiencing about $25 million per month in lower government travel.” -Delta Air Lines (Jan. 15)

“With SVB Leerink, we expect core fee income growth in the high-60s. This reflects our expectations of slow investment banking revenues in the first quarter due to the impact of the government shutdown on the SEC IPO review process.” -SVB Financial Group (Jan. 24)

“And finally just like everyone, we are keeping a very close eye on the impact of the government shutdown and we currently estimate a $10 million to $15 million negative impact in January revenues thus far. And that is built into our Q1 RASM guidance.” -Southwest Airlines (Jan. 24)

“So far, I would say the impact on as has been – certainly, it's calculable, but not big. It's a small impact for us right now. I would say we get a little more concerned if the shutdown goes longer because it has knock-on effects to other things.” -W.W. Grainger (Jan. 24)

“The geopolitical comment, however, affects all this. It provides a backdrop of obdurate uncertainty. Trade wars, government shutdown, China slowdown, EU slowdown, Brexit, you name it, both here and abroad, impact people's economic growth outlook.” -Bank of America (Jan. 16)

“Having said that, I would say that we've got the same caution that we would have had on prior calls around the overall economic and political backdrop that's going on right now and that customer sentiment still remains somewhat mixed around tariffs and government shutdown, labor constraints, et cetera. So we've got to factor that into the equation overall.” -Comerica (Jan. 16)

“Let me just add one more comment that I found the most interesting, probably the most interesting statistic that I've seen about the economy is something called the global Economic Policy Uncertainty Index…it's a scale of the degree of policy uncertainty around the world. And let me give you a couple of points. During the 9/11 attack and the Iraq-Iran – excuse Iraq war breaking out that index was at 200. At the peak of the global financial crisis it was at 210 and Brexit it got to 300 and today given the China war and the government shutdown and all that it's well north of 300. Now I have no idea whether there is any academic rigor or anything related to this index, but I just found it fascinating that the world thinks we're in a much less certain environment. Now certain is – uncertain is usually viewed as bad.” -Prologis (Jan. 22)