How Much Do Government Contracts Contribute to Defense Suppliers’ Revenue Share?

To assess the financial health of defense sector companies, it’s essential to track government contract awards. This is especially true amid the possibility of a recession. Government contracts could prove to be a lifeline to companies if their commercial businesses take a hit. 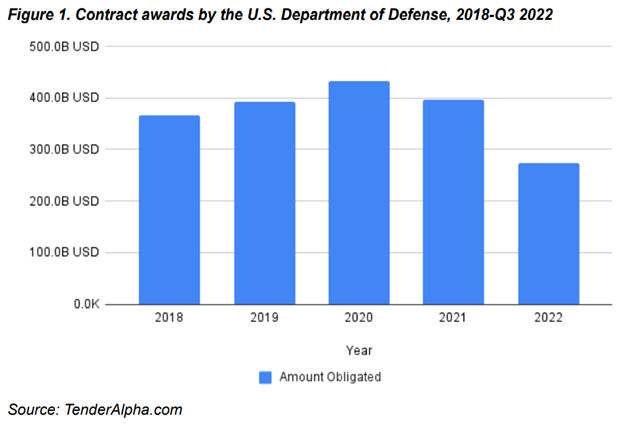 This article reviews the latest quarterly and annual results across the four largest defense suppliers in the U.S.: Lockheed Martin, Boeing, Raytheon Technologies, and Booz Allen Hamilton. We also highlight the significance of government procurement for their revenue, using government contracts data by TenderAlpha.com, also available through the TenderAlpha Global Defense and Military Contracting News Feed.

Lockheed reported a 3.5% rise in sales year-over-year, with strong free cash flow generation at $2.7 billion (full-year guidance unchanged at $6 billion). On the other hand, operating margins were marginally down, declining to 11.2% from 11.5% in the prior year quarter. Overall, operating profit was flat Y/Y.

Looking ahead, LMT kept its 2022 outlook largely intact, only doubling the amount allotted to share repurchases to $8 billion ($4 billion in a debt-funded buyback to be executed in Q4 2022).

Turning to 2023, the company estimates flat sales compared to the 2022 outlook, citing supply chain challenges. On a positive note, it remains convinced of its ability to generate free cash flow.

If free cash flow grows by mid-single digits annually over the next three years, it may reach $7 billion. In that scenario, the 2025 free cash flow yield against the current market cap of $126 billion would be around 5.5%. Coupled with a 3% U.S. economy growth rate (LMT currently sees 2024 growth resuming at a low-single digit level, with potential upside), it could boost the post-2025 expected return to over 8%.

Because Lockheed Martin has no tangible stockholders’ equity after accounting for intangibles and liabilities, the company’s current valuation is based entirely on its capacity to generate earnings.

Among government-dependent companies, few match the definition as closely as Lockheed Martin. Per the company’s 2021 annual report:

Q3 was a mixed quarter for Boeing.

BA delivered nine of its 787 Dreamliner planes and has 115 jets remaining in inventory. The company also kept its forecast for a total of $2 billion in abnormal costs relating to the 787 program, to be incurred mostly by the end of 2023.

According to company discussions during its 2022 Investor Day, the main drag going into 2023 will continue to be BDS. Around $0.75 billion in negative operating cash flow is expected to be offset by $3 billion of estimated inflows in each of the BGS and BCA divisions.

The big announcement for Boeing was certainly its $10 billion 2025-2026 free cash flow aspiration, which is very attractive relative to its current circa $95 billion market capitalization. We expect 2023-2025 cash flows to go towards fixing the balance sheet, with dividends contingent on a successful turnaround in 2026. 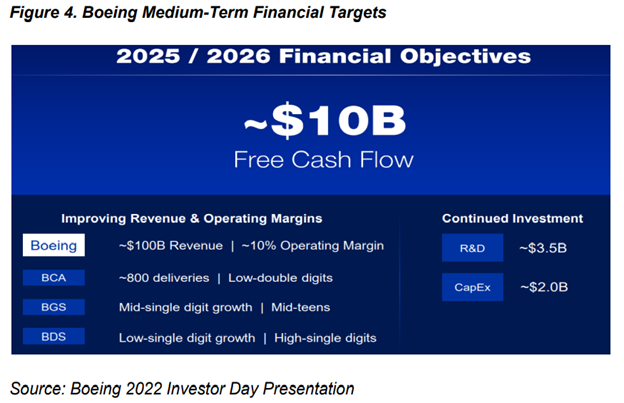 The Boeing Defense, Space & Security segment’s primary customer is the U.S. Department of Defense. Revenues from the U.S. DoD, including foreign military sales through the U.S. government, accounted for approximately 84% of its 2021 revenues, according to the Boeing 2021 annual report.

Conversely, results at the RIS and RMD segments were muted. Organic sales growth was -3% for RIS and -5% for RMD. Backlog at both divisions improved, up $2 billion to $32 billion at RMD and up $1 billion to $17 billion at RIS. 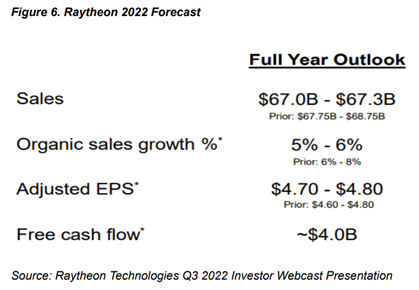 It’s expected that growth will moderate going into 2023 on the back of a more gradual recovery in air traffic, offset by a pick-up in government defense spending as won contracts translate into actual sales. The company also singled out a negative $0.4 per share impact on EPS from pensions next year. 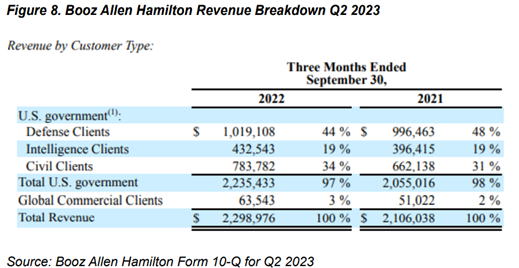 BAH achieved 9.2% revenue growth for the quarter, driven by the Civil Clients segment. The company remains committed to M&A activity to help it reach an adjusted EBITDA target of $1.2 billion - $1.3 billion in fiscal 2025.

The company slightly increased its expectations for fiscal year 2023. Revenue growth is forecasted between 8% - 10%, inclusive of 1 - 2% inorganic contributions. Operating cash flow of $875m - $950m is forecasted.

The defense sector has had lackluster growth in the previous decade. Against the backdrop of a looming recession and rising interest rates to stem inflation:

As shown on Figure 9, all four companies rely heavily on government sales.

In conclusion, we again posit that monitoring the public procurement activity of major defense sector firms is worthwhile due to their well-documented dependence on government contracting. This holds particularly true in light of the relationship between government receivables and stock movement, as we discussed in a previous FactSet Insight article, Government Receivables as a Stock Market Signal. 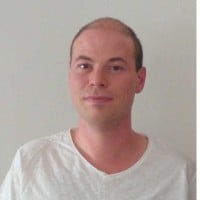 Mr. Ivo Kolchev is a data analyst serving clients in the asset management industry. Previously, he worked at the Bulgarian Stock Exchange cash market operations desk as an analyst/portfolio manager focusing on Western Europe. Mr. Kolchev earned a Master’s in Finance from the University of National and World Economy and has passed Level 3 of the CFA exam. He is a regular contributor to the TenderAlpha.com blog and seekingalpha.com.