The Inflation Reduction Act (IRA) put forth measures that will undoubtedly accelerate the US’ buildout of wind, solar, storage, and emerging technologies. While both the production tax credit (PTC) and investment tax credit (ITC) were expanded, projects that meet certain requirements are eligible for adders to their tax credits. In upcoming Insights, we will focus on one of those adders that provides projects an additional 10% credit: energy communities. We will also discuss where these energy communities are, what projects are already proposed there, and how they will evolve in the future. However, today’s Energy Market Insight will focus on identifying energy communities that are created by coal-fired unit retirements.

BTU Analytics discussed previously how coal’s share in the US capacity mix has steadily declined. Since 2010, 122.7 GW of coal-fired units have retired in the US Lower 48. Combining those retirements with the 83,776 census tracts also found in the US Lower 48 creates the map shown below.

If you would like a copy of the shapefile of energy communities created by coal unit retirements below, please email info@btuanalytics.com. 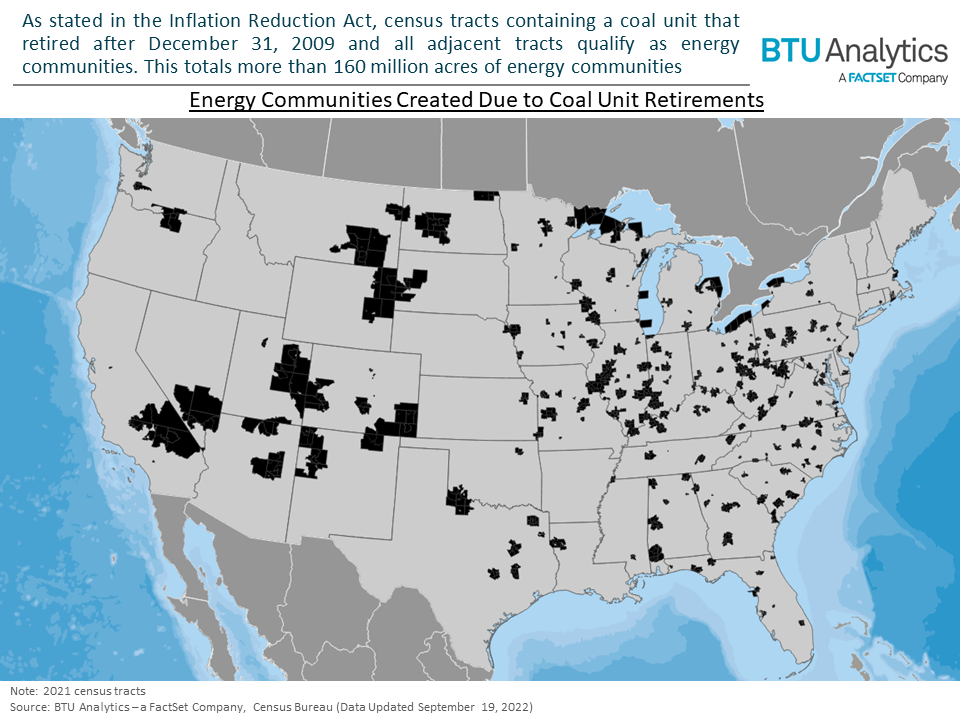 The map above shows energy communities as they stand today. However, with an additional 19.5 GW scheduled to be retired by 2025, these tracts will expand. The map below shows currently qualifying tracts (black) and two flavors of potentially qualifying tracts: tracts where a coal unit currently has a planned retirement date (blue) and tracts with a coal unit that has no announced planned retirement date (purple).

The noticeable difference in tract size in the West vs the East is due to how census tracts are determined in both areas. Each census tract is designed to have an average of 4,000 people with a minimum of 1,200 and a maximum of 8,000. This means that retired coal units in more densely populated areas of the country will have a smaller area of land designated as an energy community compared to coal units that were in a more sparsely populated location. As a result, the West region easily has the most land available for renewable energy projects looking to increase their PTC or ITC, as shown in the graphic below. 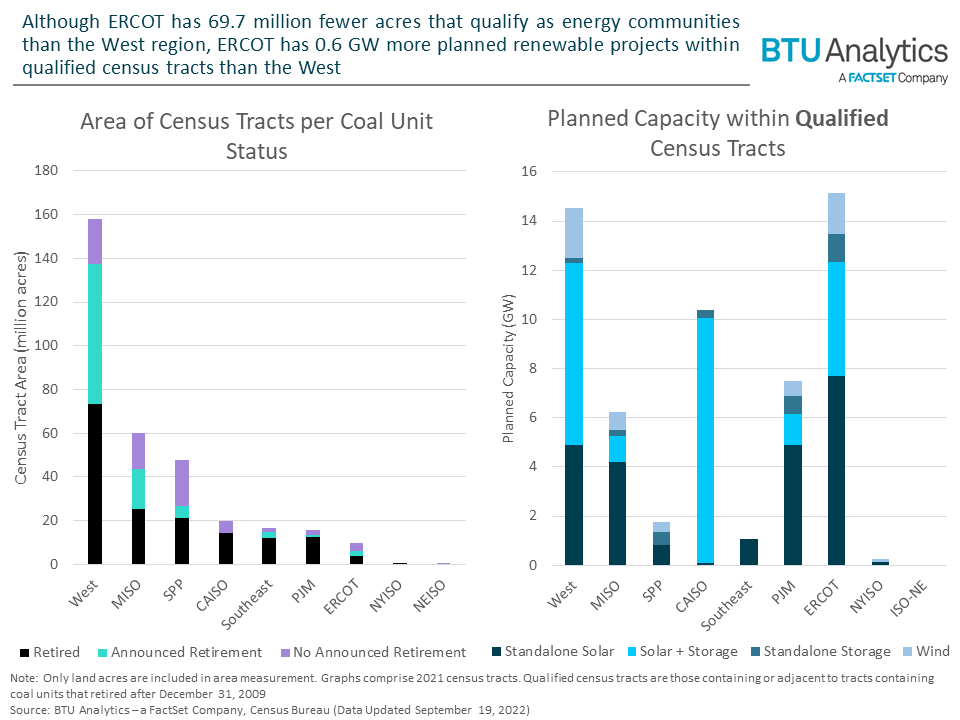 Despite having the third least amount of qualifying land among ISOs, ERCOT has the most amount of planned renewable capacity slated for qualifying census tracts. Tax programs, such as Chapter 313, higher solar and wind potential, and unique market structure help explain why there would be more projects within ERCOT. Based on the amount of land available, we may expect to see more renewable projects target MISO and SPP, as they have the 2nd and 3rd most amount of qualified land, respectively.

The impacts of this section of the IRA may already be visible in Montana. Talen Energy recently announced that they are buying out Puget Sound Energy’s stake of the coal-fired Colstrip power plant. Two units of the plant were retired in 2020, thus qualifying 9.5 million acres surrounding the unit as an energy community and making Talen’s previously announced 600 MW Silverthorn Wind project eligible for the 10% adder. How much of an impact this section of the IRA has in other parts of the US remains to be seen.

Be sure to check back in the coming weeks as BTU Analytics continues to explore the impacts of the IRA and energy communities in future Insights.

In today’s Energy Market Insight, we’ll look at how the capacity mix across the US’ seven ISOs is expected to change in the near...

The passage in August of the Inflation Reduction Act (IRA) includes $369 billion over ten years to expand the use of electric...