Most ETFs have a clear investment thesis, so it’s easy to figure out where investors who use them think they’re going. Flows into the S&P 500 show that investors are interested in U.S. large caps. iShares 20+ Year Treasury Bond ETF (TLT) investors are looking for a drop in the long end of the yield curve. SPDR Gold Trust (GLD) buyers are betting that the price of gold will increase.

There are more complex products too, whose flows are harder to interpret because they encompass several simultaneous bets. Are investors fleeing WisdomTree Europe Hedged Equity Fund (HEDJ) because they don’t believe in Europe, because they don’t want to be short the euro, or because of HEDJ’s fundamental methodology, which seeks out exporters, and weights components by dividend yield?

Luckily, most of these ETFs have competitors with simpler index methodologies that we can use as a foil. For example, we can see that currency-hedged vanilla ETFs in the developed Europe total market segment were net gainers in August, while HEDJ shed over $388 million.

Clearly, neither exposure to Europe nor the euro short were to blame in HEDJ’s outflows. It must have been the complexity that no longer appeals. Anyone with an understanding of ETF construction can tease out investor motives in funds that have a logic-based index methodology.

But logic was not in play this past month. Several of August’s biggest upsets—funds that gained market shares—track indexes that are so idiosyncratic that they have no clear investment thesis. On the contrary, August saw a rush into expensive products with 19th and 20th century index methodologies.

Take a look at the top 10 asset gatherers for August 2017—funds that took in 51.3% of all net ETF flows. You can find any number of yesteryear’s strategies there, including security selection by committee or listing exchange, and price weighting. I’m talking about you, committee-selected S&P 500 funds SPY and IVV, NASDAQ-only QQQ, and price-weighted DIA.

This dive into idiosyncrasy makes it nearly impossible to understand August’s flows using knowledge of index construction and ETF due diligence. My explanation for Augusts fund flows: investors reached for the easy button to buy ETFs that track household-name indexes.

Despite decades of index research and development, major news outlets generally report on three old-school indexes: The Dow Jones Industrial Average, the S&P 500, and the NASDAQ composite. While none of these is completely representative of the U.S. equity markets, or even of large caps, they offer familiarity. This month, familiarity appealed to ETF investors who might not want to do their due diligence homework during the dog days of summer.

Let’s look at each one of these headline indexes, and the ETFs that track them.

The Dow Jones Industrial Average hit a milestone in August, closing above 22,000 for the first time on August 2. The first week in August saw the strongest, most consistent pattern of inflows to DJIA of the calendar year. It’s pretty easy to draw the connection between the headlines and DJIA’s recent flows. 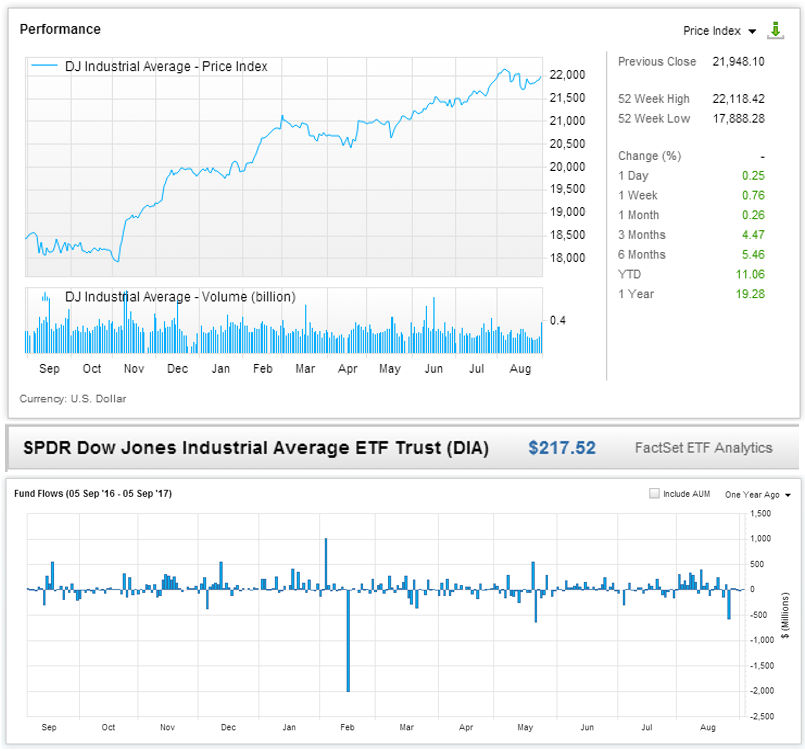 But what were the August investors thinking? The Dow Jones Industrial Average consists of a mere 30 stocks, selected by committee. The average is equal-share-weighted, holding one share of each stock, no matter the market cap. The result is an index dominated by the highest-priced stocks.

While DJIA’s portfolio consists entirely of U.S. large caps, it is hardly representative of the space. As of August 31, DJIA’s top holdings were Boeing, Goldman Sachs, and 3M, which were ranked 32, 55, and 38 in the Russell 1000. No Apple, Microsoft, Facebook, or Amazon, nor Johnson & Johnson, Berkshire Hathaway, or JP Morgan. No wonder DJIA’s goodness-of-fit vs. the MSCI USA Large Cap index is only .86. DJIA has moved in the opposite direction of the overall large cap market on about 35 days in the past calendar year. And yet, the press reveres the Dow Jones Industrial Average. August ETF investors, too. Go figure.

The S&P 500, less of a media darling, is nevertheless a perennial ETF investor favorite, with 1/7 of all ETF assets as of August 31. It’s utterly unsurprising that investors plowed more cash into it in August. The S&P 500 ETFs SPY, IVV, and VOO are the easiest of all easy buttons.

Investors who consider funds like SPY to be a proxy for the U.S. equity market—or even the U.S. large cap space—might be surprised to discover that the S&P 500 does not contain the top 500 securities by market cap, but rather is selected by S&P’s venerated index committee. The committee has some leeway to pick the index membership, though they are also constrained by requirements such as profitability in the most recent quarter and over the most recent 12 months, and also by sector and industry representation constraints.

Fifty-nine of the 500 largest companies in the U.S. are not members of the S&P 500, including Tesla, T-Mobile, First Republic Bank, Ally Financial, and Twitter. Conversely, the smallest S&P 500 member, News Corp class B, ranks 961 by market cap amongst U.S.-listed stocks, as of August 31, 2017. By most definitions, News Corp B is a mid-cap, not a large-cap.

The S&P 500 tracks the U.S. large cap market well despite its construction, not because of it. S&P 500 tracking funds SPY, IVV, and VOO have a perfect correlation with the MSCI USA Large Cap Index, with just a touch more volatility, sporting a beta of 1.02. The additional risk is likely attributable to its midcaps.

Then there’s the NASDAQ composite, also quoted daily in most press reports, alongside the Dow Jones Industrial Average and the S&P 500. Many investors believe that PowerShares QQQ Trust (QQQ) tracks this headline index. Actually, it doesn’t. Instead, QQQ tracks the NASDAQ 100. But if you’re hitting the easy button, you might not notice the difference.

The index is weighted in tiers, with the top position capped at 24%, and the net weight of all securities whose raw cap-weighting would be 4.5% or higher is capped at 48%, with individual weights ratcheted down by 1% until they collectively clear the 48% threshold. Next down are the cap-weighted positions that do not breech the 4.5% threshold. Then there’s a tier of stocks with raw cap-weights below 1% that are pumped up to 1%, using the excess weight from the caps at the top of the scale. Finally, there’s the tier of small stocks that, despite the boost from the redistribution, still weigh less than 1%.

Why do investors buy QQQ? It’s hard to fill in the blank on the investment thesis. Two common explanations are tech exposure or access to growth. But neither stands up to scrutiny.

QQQ may have a reputation as a tech proxy, but its exposure is actually broader. FactSet’s ETF Analytics sector/industry breakdown shows that, as of August 1, QQQ’s tech exposure was less than 60% of its full portfolio. QQQ held 21.5% in consumer cyclicals, and 10.72% in healthcare.

There are far more efficient ways to add tech exposure to a portfolio.

A comparison of QQQ’s top 10 holdings to those of VGT illustrates the point. Although both hold substantial positions in Apple, Microsoft, Facebook, and Alphabet, QQQ branches out into Amazon (shopping), Comcast (entertainment), and Amgen (pharmaceuticals), while VGT sticks to tech with positions in Visa, Oracle, and IBM. QQQ is hardly a pure-play tech fund.

Some consider QQQ to be a growth play.  Admittedly, QQQ has some growth-like aspects. But a comparison against mega-cap U.S. growth funds reveals that QQQ has significantly lower EPS and free cash flow growth estimates.

QQQ holds its own with sales growth estimates, but otherwise falls short. If you’re looking for a mega-cap growth play, you will do better to stick with actual growth funds.

To summarize: QQQ tracks the NASDAQ 100, not the composite. It’s only 60% tech, and not as strong on classic growth metrics as commonplace U.S. mega cap growth ETFs. It has a tranche of equal weighted securities bounded by cap-weighted, but capped mega caps. I can’t make sense of the ongoing investor interest in it.

So that was August, folks. Billions of dollars flowed into antiquated, irrationally structured indexes in the U.S. large cap segment. Chalk one up for household names. August’s ETF flows remind us that there are many ways to choose an ETF, and only some of them involve deep due diligence on index construction.