Carbon capture and sequestration (CCS) has recently gained traction as a strategy for achieving climate goals, partly due to the passage of the Inflation Reduction Act (IRA). As a core part of the IRA legislation, the maximum 45Q tax credit was raised from $50 to $85/t for capturing CO2 from sources like industrial facilities or power plants. BTU Analytics has recently analyzed how enhanced 45Q credits could affect the economics of gas pipeline projects and enhanced oil recovery. Today’s Energy Market Insight looks at the potential of industrial CCS, which stands to meaningfully increase US energy demand. 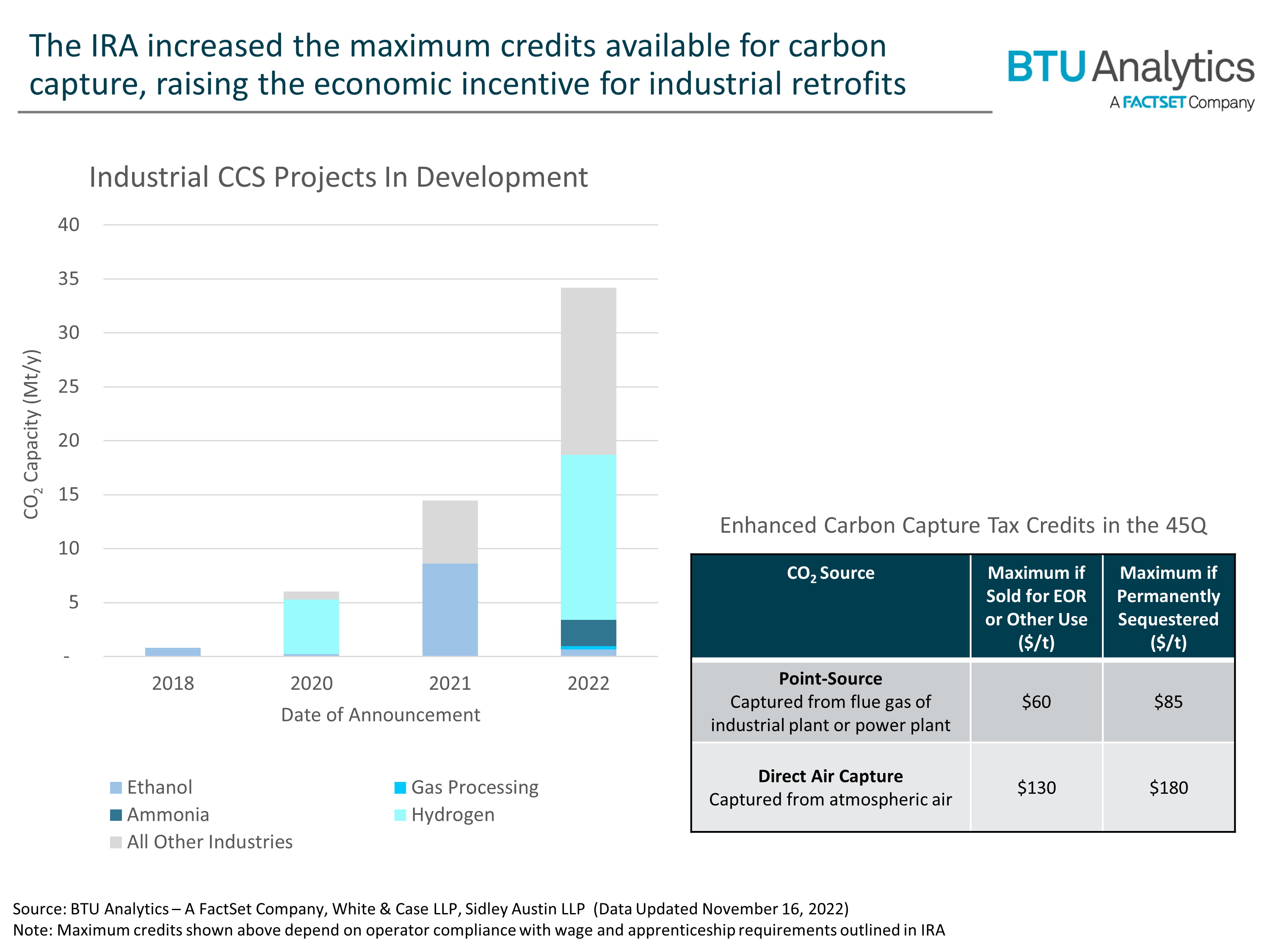 BTU Analytics counts 97 CCS projects currently in development in the US, with an estimated CO2 capacity totaling 171 megatons per year (Mt/y). Of this capacity, a full 77% has been proposed in 2022, indicating that the anticipation and passage of the IRA may be stoking greater interest in developing CCS projects, particularly due to changes in the 45Q tax credit for capturing CO2.

The economic breakeven for capturing CO2 varies greatly by technology and application. BTU Analytics notes that pre-combustion CCS is largely the most economical. In this application, CO2 is removed from a stream of flue gases, primarily from non-combustion sources, such as the off-gassing of a chemical reaction. Four industries are notable for generating a high concentration of CO2 byproduct in their flue gas: Ethanol, Gas Processing, Ammonia, and Hydrogen. As seen in the chart below, a majority of Ethanol, Gas Processing, and Ammonia facilities were already modeled to be capable of economic retrofit at the previous 45Q level. In fact, 18 Mt/y of CCS capacity is already operational among these three industries. 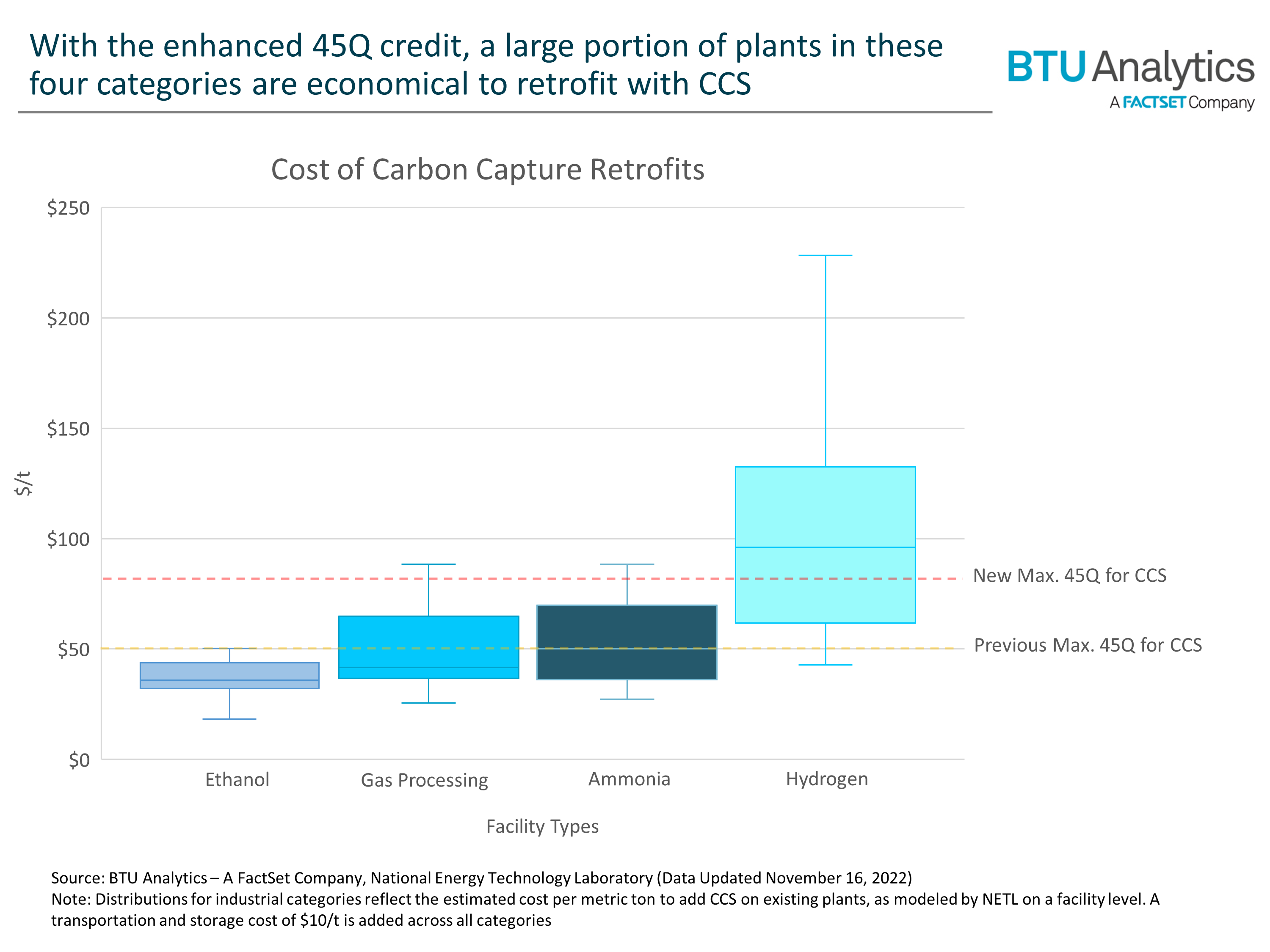 BTU Analytics estimates that 42 Mt/y of CCS capacity is currently in development at US Ethanol, Gas Processing, Ammonia, and Hydrogen facilities, making up the majority of announced CCS projects at industrial facilities and a large portion of the total project queue. However, these announced projects represent only a small percentage of operating facilities that could be retrofitted with CCS. According to NETL estimates, carbon capture capacity in these four industries could be more than 7x higher than that of currently announced projects while still remaining below the $85/t cost threshold. If all potentially economic facilities were retrofit, this would represent a capacity to capture 330 Mt/y of CO2, or roughly 22% of today’s total US industrial greenhouse gas emissions. 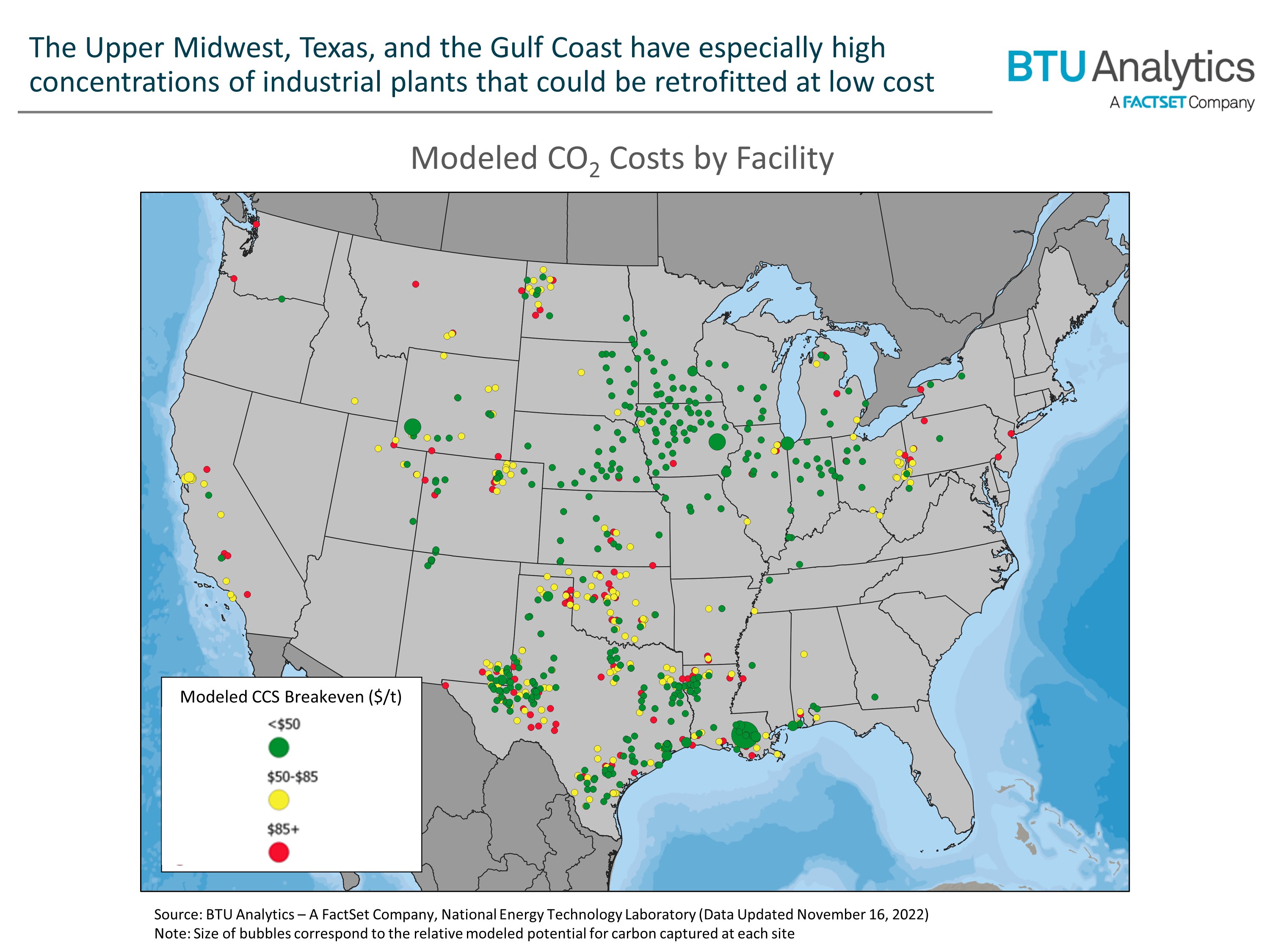 Notably, the deployment of CCS in these industries could materialize quickly, as these retrofits are theoretically economic today under the current $85/t 45Q credit. Additionally, the concentration of these facilities in Texas, the Gulf Coast, and the Upper Midwest allows for a quicker development of necessary infrastructure for transportation and storage. Notable infrastructure projects are already underway with the goal of making these areas CCS hubs.