Intermodal Displaces Coal As King of the Rails

Even in the digital twenty-first century, railroads play a critical role in the U.S. economy. In fact, the volume of freight carried over U.S. railroads is still considered a barometer for the nation's economic activity. Although trucking leads total freight hauling in terms of tonnage and value, trucking dominates for shorter hauls (750 or fewer miles) while railroads carry significant volumes of goods over longer distances, dominating for freight shipments moving 750 to 2000 miles according to the U.S. Department of Transportation. At this point in the current economic expansion, how are U.S. rail companies faring and what are the risks to the outlook for this industry? 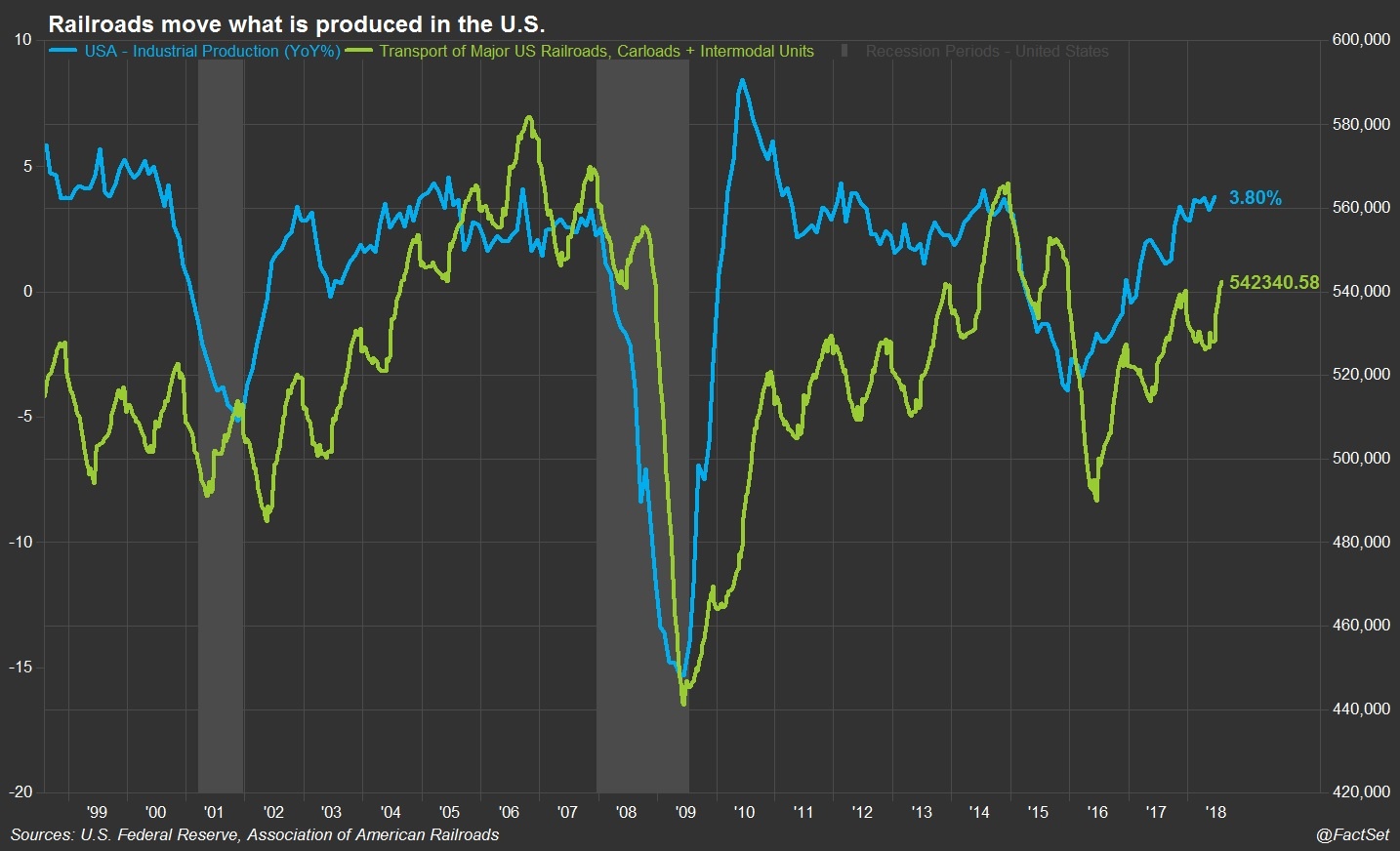 Railroad Freight Traffic Up in 2017, But Coal’s Dominance Fading

According to the Association of American Railroads (AAR), in 2017, U.S. railroads originated 13.5 million carloads, a 2.9% increase over 2016. Intermodal units totaled 14.0 million, up 3.9% from 2016. Railroads transport everything from coal to grains to automobiles across the country every day. Let’s take a closer look at some of the key commodities and industries that drive rail traffic. 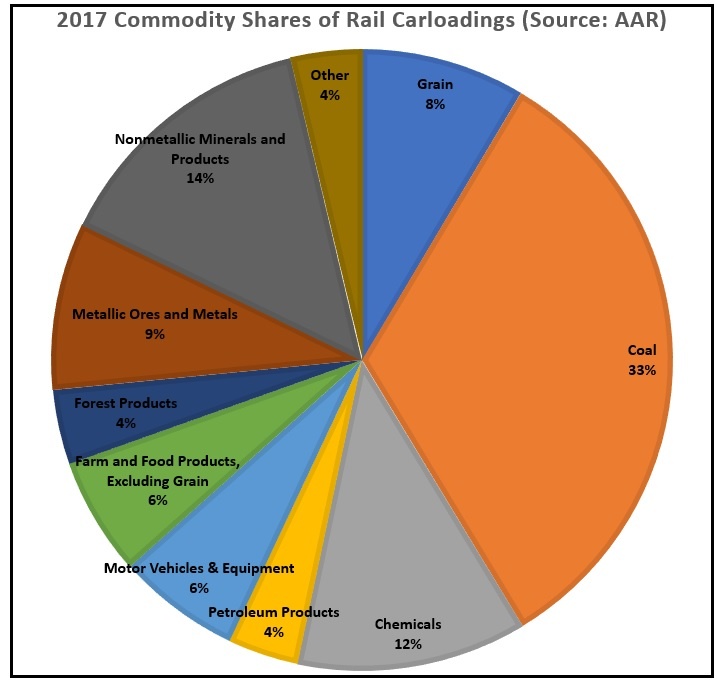 As shown in the pie chart above, coal dominates U.S. rail carloadings, although its dominance has fallen steadily over the last decade. Coal accounted for one-third of rail carloadings in 2017, compared to 48% in 2009. Most of the coal produced in the U.S. is consumed at power plants and according to the AAR, approximately 70% of that coal is delivered by rail. But coal’s importance in electricity generation is on the decline.

Over the last decade we’ve seen a steady decrease in the share of electricity generated from coal due to competition from cheaper natural gas and environmental pressures. In 2008, 48% of electricity in the U.S. was generated by burning coal, but this share fell to 30% in 2017. Over the last three months (March-May 2018), the share has averaged 25%, near an all-time low. This shift has certainly impacted the railroad industry, forcing railroad companies to look to other types of freight to grow their revenues. 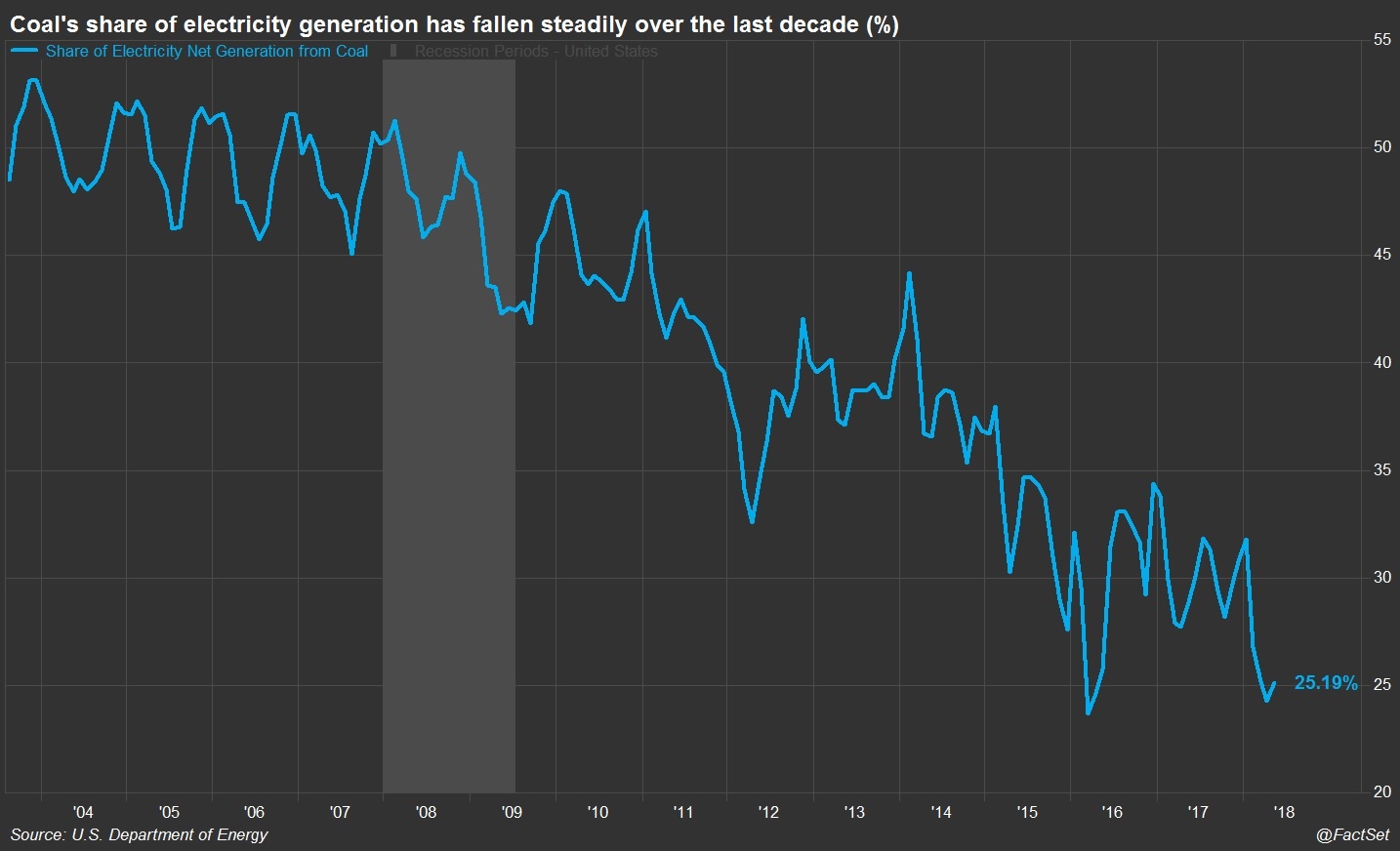 Tariffs Will Affect Shipments of Construction and Agricultural Commodities

The recovery of the construction sector during this economic expansion has been a major source of strength for the rail industry. The second biggest share of carloadings in 2017 was for nonmetallic minerals and products, accounting for 14% of rail carloadings last year. This category includes raw materials like crushed stone, sand, gravel, limestone, and gypsum, critical inputs for the construction industry. In addition to nonmetallic minerals, trains also transport other construction materials long distances, such as lumber and steel. According to the AAR, Class I railroads (defined as having annual operating revenues of $448 million or more) moved 540,000 carloads of construction materials in 2016, representing 1.95% of total carloads.

However, now that we are in the 10th year of this economic expansion, headwinds are building for the housing sector, in particular. Rising costs on the supply side could dampen housing construction activity, including higher lumber costs due to the imposition of higher tariffs on imports of Canadian lumber in April 2017. In addition, the U.S. announced tariffs on imported steel and aluminum products in March 2018, which will have broader repercussions across the entire construction industry.

Trade tensions are also likely to have an impact on rail carloadings in the agriculture category. In July, China instituted a 25% tariff on U.S. soybean imports in retaliation for U.S. tariffs on Chinese imports. Due to the importance of trade for U.S. soybean farmers, this will have significant consequences for U.S. agriculture. According to the U.S. Department of Agriculture, China is the world’s top importer of soybeans, while the U.S. is the world’s largest producer and exporter of soybeans.

In turn, these soybean tariffs are likely to hurt railroad companies. In 2017, grains represented about 9% of total carloads originated while soybeans represent more than 20% of the total grains moved by freight rail. This may not seem like a lot, but shipments of agricultural products are the most profitable cargo for railroad companies. In its second quarter earnings call, Union Pacific reported that average revenue per carload was $3,903 for its agriculture segment; this compares to $2,874 for energy, $3,178 for industrial, and $1,503 for premium (includes domestic and international intermodal, finished vehicles).

Transporting goods between producers and customers is only part of the story. A rapidly increasing share of railroads’ revenue now comes from the intermodal business, which involves the movement of containers via some combination of rail, ship, or truck. According to the AAR, U.S. intermodal traffic exceeded carloads in 2017 for the first time in history. The volume of intermodal traffic within the U.S. is driven both by strong domestic commerce and international trade flows.

In terms of domestic factors, transportation costs, trucking industry constraints, and the rapid growth of e-commerce are all helping to boost rail intermodal business. Because trains are more fuel-efficient than trucks, rising fuel prices give rail transport a competitive advantage. In addition, the trucking industry is currently facing a number of capacity constraints, including a shortage of qualified drivers, which is driving up costs. Additionally, the ongoing surge in e-commerce means that retailers are under increasing competitive pressure to get goods to consumers faster than ever and trains are often the fastest way to move goods over long distances. All of these factors make rail transport the more desirable option for a growing number of companies. 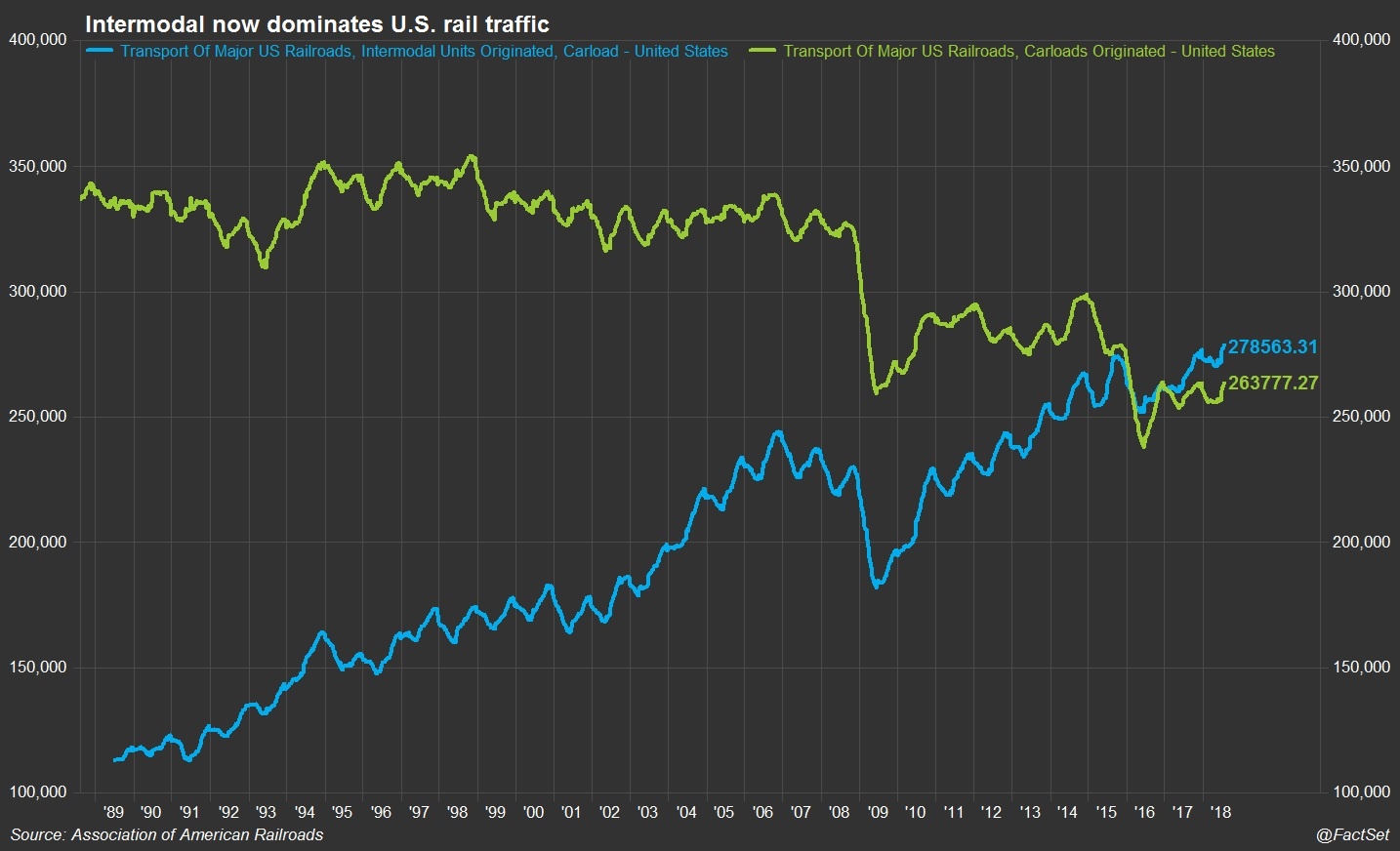 Railroads are not just responsible for transporting goods to domestic businesses and consumers, international trade is a rapidly growing component of U.S. railroads’ business. According to the AAR, “42% of rail carloads and intermodal units and 35% of annual rail revenue are directly associated with international trade.” Railroads have successfully tapped into international shipping flows by extending their tracks right up to our nation’s ports. In recent years, U.S. railroad companies have made significant investments in on-dock and near-dock railyards. On-dock railyards allow cargo from ships to be loaded directly on to a train, without first having to haul the cargo from the port to the railyard by truck. Not only do on-dock railyards move the cargo faster, but they reduce pollution in the areas surrounding the railyards. At the Port of Long Beach, the second busiest container port in the U.S., nearly 50% of all imported containers travel to their final destinations by train. At the same time, approximately 70% of containers for export arrive at the port via the railroad.

On top of the macro factors that drive demand from rail customers to transport their goods, railroad companies are also affected by price and supply/demand impacts on their own business inputs. For example, fuel is a key input for railroads. Union Pacific benefited from the late-2014 dip in oil prices, seeing a nearly 50% reduction in its fuel costs between 2012 and 2017. The company reported that fuel represented 14% of total operating expenses in 2017, compared to 25% in 2012. With crude oil prices currently up 40% from a year ago, the share of fuel costs is likely to increase again in 2018. Railroad companies can recoup higher fuel costs through their fuel surcharge programs, although the surcharge revenues can lag the actual price increases. According to Union Pacific, it can take up to two months for the changes in fuel prices to affect fuel surcharge recoveries.

The other key input cost for railroads is steel. Every year, railroad companies need to replace lengths of rail throughout their networks. Union Pacific sources its steel rails both domestically and internationally as a normal course of business. In July, Union Pacific CEO Lance Fritz said that the company saw the cost of a shipment of steel rails from Japan jump by 25%, or $6 million, following the imposition of the steel tariff. In addition, Fritz said that the cost of U.S.-produced steel has gone up by 30% or more.

U.S. railroads are an integral component in the movement of goods both within the U.S. and to and from the rest of the world. As such, the industry is susceptible to both domestic and global economic events. As we enter the second half of 2018, the U.S. economy looks strong and the global economy is still expanding. However, rising trade tensions present risks for the outlook, including for the railroad industry.