IPO Activity Picks Up in Q2 2018, But Less Money Raised

In terms of gross proceeds, the second quarter of 2018 may have seen a higher number of IPOs, but the deals were significantly smaller. Gross proceeds from IPOs totaled $16.5 billion for the quarter, down 12% from the previous quarter but up 12% from a year earlier. Still, given the strength of Q1, IPOs have already generated $35.2 billion so far in 2018, more than two-thirds of the total gross proceeds raised in all of 2017 ($50.9 billion).

Although offerings in Q2 were on average smaller than we saw in Q1, we’re still seeing a continuation of the overall trend toward larger public offerings that began in 2017. In Q2, gross proceeds from IPOs averaged $220 million, just below 2017’s annual average of $222 million. In Q2, IPOs with gross proceeds of between $100 and $500 million represented 49% of all IPOs, while 10.7% of IPOs raised more than $500 million. For the quarter, there were two IPOs that raised more than $1 billion. While this was half of what we saw in Q1, so far in 2018 we’ve already had six of these mega-IPOs. This makes 2018 the best year for mega deals since 2014, when we saw 18 IPOs with gross proceeds over $1 billion for the entire year. 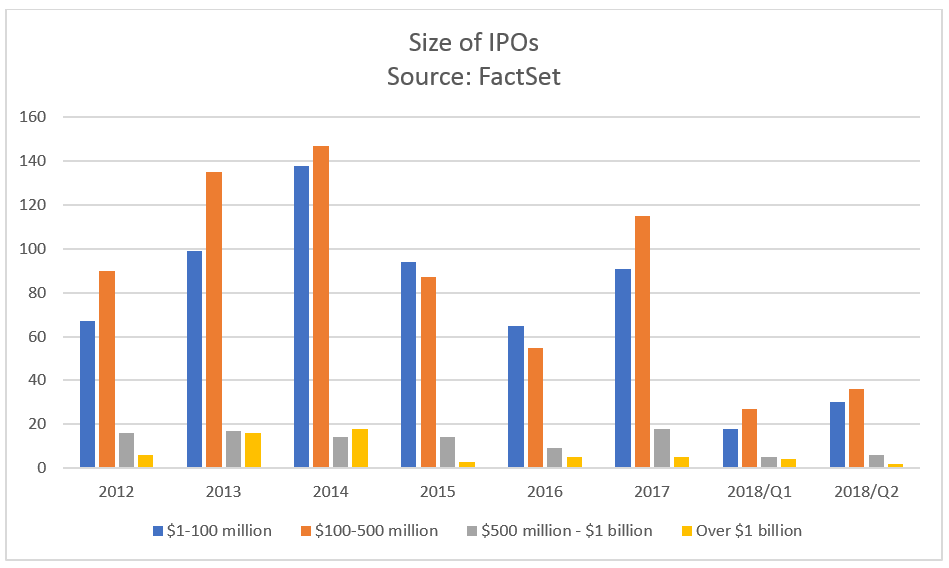 On the other hand, the Finance sector had 19 IPOs in the second quarter, but those offerings raised a total of $6.9 billion, 42% of total funds raised in the quarter. This sector’s offerings included both mega-IPOs for the quarter; the AXA Equitable Holdings IPO priced on May 10 raised $2.75 billion and the GreenSky IPO on May 24 raised $1 billion.

Financial Sponsors Are Coming Back

There were 33 venture-capital backed IPOs in the first quarter, the highest quarterly number in three years. The offerings were bigger, including two of the top five IPOs of the quarter, GreenSky and DocuSign. As a result, gross proceeds totaled $5.8 billion, making it the biggest quarter in terms of money raised since the fourth quarter of 2013. 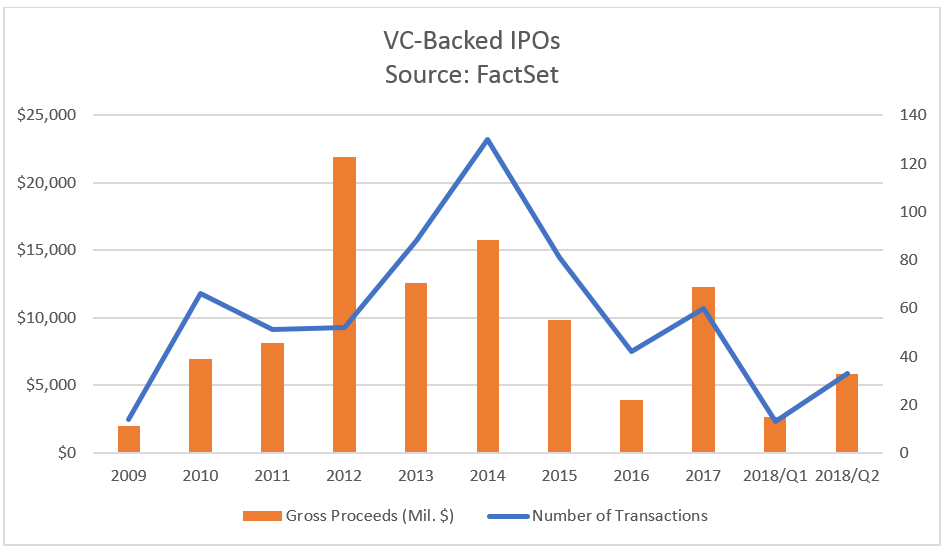 There were 11 private equity-backed IPOs in the second quarter of 2018, down from 14 in the first quarter. The biggest PE-backed offering of the quarter was the BJ’s Wholesale Club IPO, which priced on June 27 and raised $733 million. This was a return to the public markets for BJ’s, which was taken private in 2011.

The May 10 IPO of AXA Equitable Holdings was the largest U.S.-listed IPO so far in 2018, but it still failed to meet expectations. The offering for this French insurer was expected to raise $3.5 billion; however, the IPO was priced at just $20 per share, below its expected range of $24-27 per share, raising just $2.75 billion. The IPO came at a time when insurance companies remain under a lot of pressure, with shares of Prudential Financial, Principal Financial, and MetLife all down 10-25% year-to-date.

Although the number of Chinese (China and Hong Kong) companies listing on U.S. exchanges fell in the second quarter (six compared to nine in Q1), this is still an important trend to follow. Only two Chinese companies had IPOs on U.S. exchanges in 2016; in 2017, this number jumped to 24, raising a total of $3.9 billion. So far in 2018, we’ve already seen 15 Chinese company IPOs raising a total of $3.9 billion, so we’re on track to surpass last year’s numbers. The largest and most closely watched Chinese IPO in the second quarter was live streaming company Huya, which priced on May 11 and raised $207 million. So far, Huya’s stock has performed well, doubling in price since its debut (closing at $32.09 on July 10 versus its opening price of $16.06).

Looking ahead at future IPOs, there are 28 companies that released initial preliminary filings in 2017 and are still in registration (this excludes offerings that have been postponed or withdrawn). In addition, another 59 companies have released their initial preliminary filings so far in 2018. Of the companies that have filed in 2018, the pipeline is dominated by the Health Technology and Finance sectors, continuing the trend of the last year.

Taking Environmental Issues Seriously in the Wake of Australia's Fires

Though bushfires are natural to Australia’s ecosystems, the frequency, duration, and severity of fire weather in recent years...

By Harmony Zhou  |  Companies and Markets

Our experts weigh in on the stories that will define 2020.