Is Consolidation the Way Forward for the Middle East Banking Sector?

The Middle East has an overcrowded banking sector, comprised of both local and international large-scale banks and family-owned small lenders. The current macroeconomic climate is challenging for banks, as economic growth is slow and credit demand weak. The competitive banking sector is feeling this pressure acutely since they no longer have public sector deposits to fall back on, as those deposits are being withdrawn to smooth government budgets that have been hit by lower oil prices.

This makes the Middle East banking sector ripe for consolidation and calls for some of the larger banks to merge with their smaller counterparts to create bigger entities. Such mergers could increase these banks’ pricing power, improve their ability to meet sizeable investments, reduce the pressure on operating and funding costs, and ultimately improve profitability and economies of scale.

Smaller banks in the region are taking the biggest hit in the current economic environment as they struggle to remain liquid and don’t have the scale to spur revenue growth and turn a profit. The loss of government deposits has severely impaired banks’ ability to lend. Between July 2014 and February 2016, oil prices plummeted by 75%, causing a sharp drop in oil export revenues. As governments attempted to maintain spending levels, they withdrew large bank deposits and ran large deficits. Taking the example of the largest economy in the GCC region, Saudi Arabia, the chart below illustrates how the nation’s budget deficit soared as the crude oil price fell. 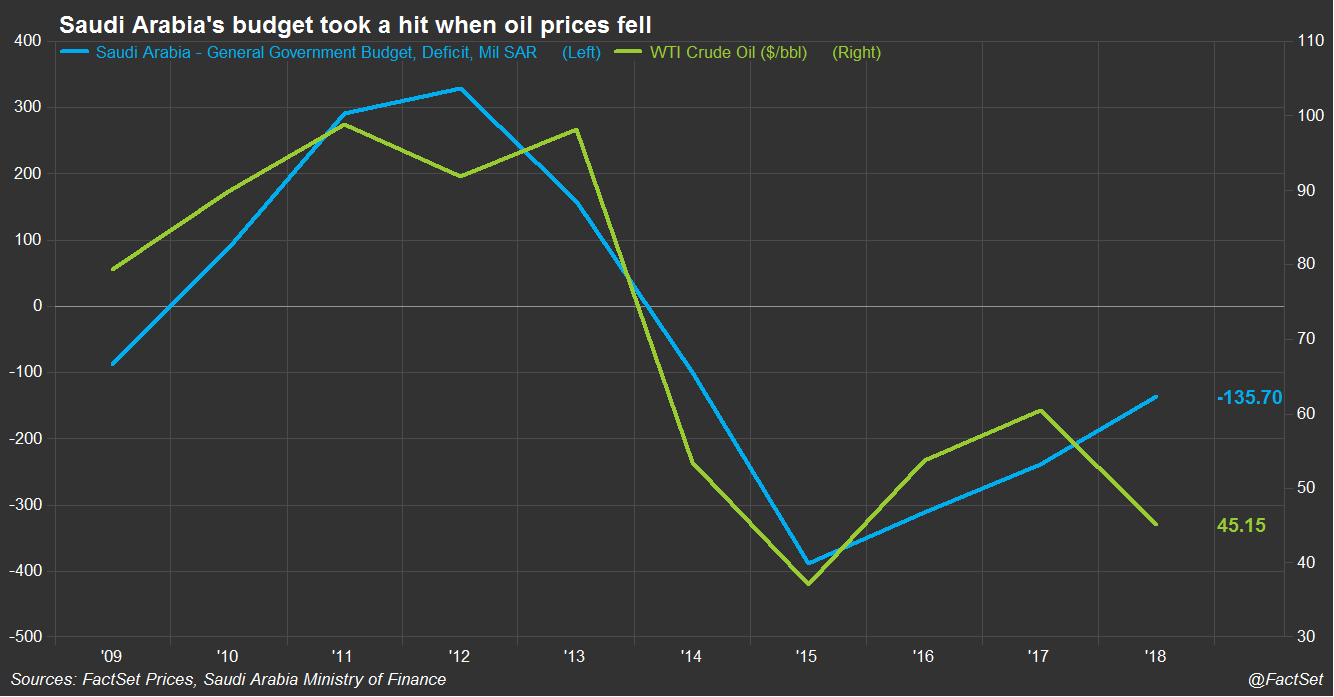 Most regional banks are still relatively small and a significant number are owned by their local states and therefore, their ruling families. These banks have felt the impact of the economic slowdown more than their larger rivals because they tend to have higher exposures to small and mid-sized enterprises (SMEs), specifically in the real estate and construction sectors. These two sectors are also experiencing a downturn in the region as oversupply drives down property prices while the prices of construction materials are rising. This has a negative impact on the asset quality metrics of the banks; hence, central banks in the region are implementing regulatory measures to help maintain minimum capital, liquidity, and loan loss reserve levels. Unfortunately, this has not been enough for the smaller banks to preserve their market share since they have not explored expanding outside their local markets, nor have they invested enough capital into the innovative technology that is driving the financial sector today.

Could Mergers Be the Answer?

Merger opportunities will allow banks to realize economies of scale and tackle market pressures more dynamically. A merged entity may be better positioned to diversify risk away from SMEs that are unable to pay their loans to more profitable companies with healthier credit in order to maintain strong interest margins. They may also be better prepared to withstand regulatory changes such as IFRS9 by maintaining strong reserves without having a significant impact on profitability.

In addition, larger banks may be able to absorb the implications of taxations such as VAT without affecting their growth aspirations, considering the likely reduction in disposable income and credit demand due to VAT. Industry consolidation will better equip banks to implement digitization to drive operational efficiency and make tasks simpler for employees and customers. It may also enable them to expand across the region in search of more market share and revenue growth.

The volume of bank mergers that have taken place over the last ten years in the GCC has been very low, with only 13 transactions taking place across the UAE, Bahrain, and Oman. The UAE leads the other countries with seven completed transactions as they recognized the need to consolidate much earlier than their GCC allies. 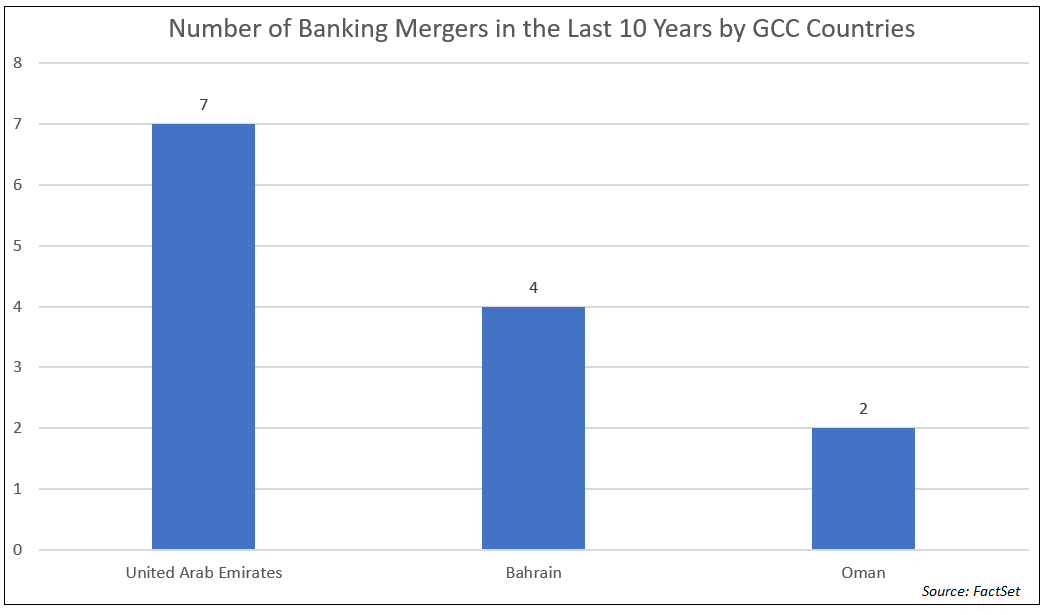 Despite the obvious benefits of industry consolidation, there remains the question of sustainability of the GCC banking sector regardless of the size of the banks. Most of these banks are still controlled by the state and their financial institutions (i.e., sovereign wealth funds and state pension funds), which have been financed by oil revenues. Therefore, the liquidity of GCC banks is directly proportional to the oil price and government deposits. These factors pose a challenge to building stronger financial systems regardless of consolidation.

Furthermore, these banks are also used as the financial arms of the government and are not immune to political interference. According to the General-Director of the Crown Prince Court of Abu Dhabi, “UAE banks waived $98.3 million of debt of Emarati citizens to ensure social stability.” This causes a high concentration of risk since lending is provided to some politically influential obligators or to the construction and real estate sectors. The table below shows the percentage of shares outstanding held by top holders for the largest banks in each GCC country based on total assets. According to data collected by FactSet, the largest holder of each of these banks is their respective state financial institution.

The UAE recognized the need for consolidation early on, recognizing the need for economic diversification in the face of finite oil reserves. The first of such mergers occurred in October 2007, when Emirates Bank International acquired National Bank of Dubai to form Emirates NBD, one of the largest banks in the Middle East in terms of assets. Ten years later, the National Bank of Abu Dhabi merged with First Gulf Bank to create First Abu Dhabi Bank, the country’s largest bank in terms of assets. The latest merger to be finalized was that of Abu Dhabi Commercial bank acquiring Union National Bank; the merged entity then acquired Al Hilal Bank. These three banks have all merged into Abu Dhabi Commercial Bank, forming the third largest lender in terms of assets in the UAE.

These are all examples of consolidation in the UAE banking sector as banks find themselves under increasing pressure from weak government and consumer spending due to low oil prices. Other nations within the GCC are also considering intra- and inter-region banking mergers to shore up their balance sheets. Below are examples of some of the rumored/pending deals in the region over the last five years.

Some banks are also looking to expand their presence beyond the GCC. For example, Emirates NBD has offered to take a majority stake in Turkey’s Denizbank from Russia’s Sberbank. As shown in the table below, the benefits are clear for Dubai’s largest lender. Owning Denizbank opens an entirely new revenue-generating industry in Investment Services to which Emirates NBD did not previously have any exposure.

Overall, consolidation could help improve the solvency of GCC banks in the short- to medium-term. Larger banks may be more resilient in the face of changing market forces and new norms we are seeing in the GCC today, such as streamlined regulations, taxation (VAT), and lower oil prices. Changes in consumer behavior are also correlated to the uncertain political/macro-economic landscape of the region. Hence it is an attractive proposition for smaller banks to merge with their larger counterparts to keep up with the competition and identify new markets for growth.

In addition, the financial and economic landscape of the region remains heavily influenced by the political tussle taking place in the GCC. Therefore, long-term stability may require greater cooperation between the leaders of the GCC nations and more autonomy for the region’s financial institutions. 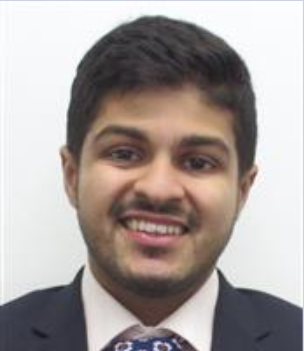 Ali joined FactSet in 2016 and is based in Dubai.