In its latest earnings report, EOG Resources highlighted its well results in the volatile oil window of the Utica shale, touting the region’s contribution to its premium inventory. EOG stated it expects “the Utica Combo to be its next large-scale premium resource play” and that it believes it can be developed using three-mile laterals. Historically, this area has seen limited production activity due to the comparably worse well performance against the Utica wet and dry gas windows. However, the historical underdevelopment of the volatile oil window and the black oil window means there is an abundance of potential locations that could add to Appalachia inventory estimates. In this Energy Market Insight, we’ll take a look into EOG’s claims and analyze their potential impacts on Utica production and activity going forward.

Ohio’s state data shows EOG completed one well in 2021, Rose 0801, located in Carroll County. In 2022, EOG drilled four additional wells located in Carroll, Noble, and Stark counties. In its latest earnings report, EOG stated it plans to drill 20 wells in the area through 2023, signaling its commitment to developing the area further. Rose 0801 is the only well currently reporting production data and serves as the basis for dissecting EOG’s claims of a new premium play. The permit filed with the state shows Rose 0801 was a 6,100-foot lateral, and the preliminary production data shows it produced 3,500 Mcf/d and 651 b/d at its peak. These results would be in line with the few wells drilled since 2018 and be indistinct from prior activity. However, if the performance were scaled to reflect three-mile laterals, as EOG suggests it plans to do, the wells could perform closer to 5,100 Mcf/d and 960 b/d at their peak. This would put this region on par with Eagle Ford and SCOOP/STACK well performance and potentially support EOG’s claims. 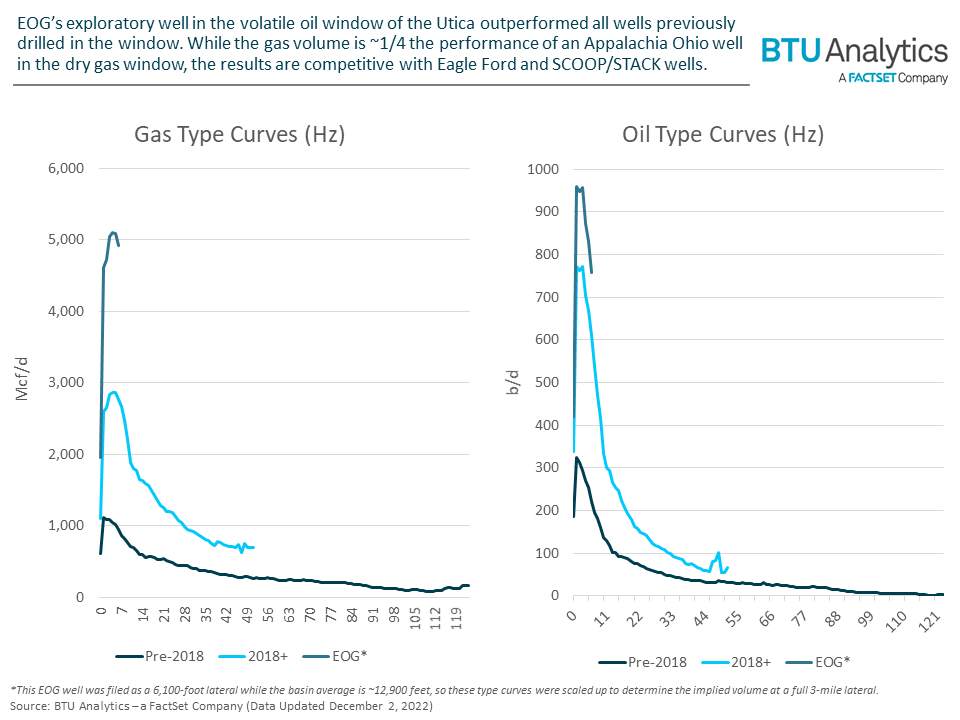 With the preliminary data suggesting impressive results for the underdeveloped window, the magnitude of potential development comes into question. BTU’s current inventory estimates extend into the wet gas window but are very limited in the volatile oil window, as there are few existing wells to build inventory around. Furthermore, current inventory estimates show breakevens increase as locations move from the dry gas to the black oil window, with volatile oil window locations being greater than $4/MMBtu, which has been prohibitive to development.

If EOG could replicate the results of its Rose 0801 well across all of its acreage using three-mile laterals, BTU estimates it would add 1,509 Utica shale locations. If other acreage owners could replicate the results across the entire window, there could be over 3,200 additional locations. If the region saw producer activity equal to the dry and wet gas windows at ~15 wells per month, the volatile oil window could add more than 15 years of inventory to the area. However, the greatest hindrance to this rapid development in the region is the additional infrastructure buildout that would be required to support any significant growth, as most existing infrastructure is centered around the wet gas window.

BTU Analytics does not currently include the volatile oil window in its Appalachia Ohio inventory estimates due to a lack of activity. But, if EOG’s claims are replicable, then the region could see additional inventory locations in future E&P Positioning Reports. As there is virtually no current activity in this window, any development would be incremental production growth for both liquids and gas. EOG’s plan for 20 wells in 2023 is less than two wells per month. Assuming it holds this program flat through 2027 and are the only operators with incremental activity in the region, BTU estimates the two-wells-per-month program would add 0.2 Bcf/d of incremental gas and 23 Mb/d of incremental liquids by the end of 2027. In a scenario where EOG’s wells are replicable and the window attracts full-scale development on par with the wet and dry gas windows at 15 wells per month, BTU estimates 1.8 Bcf/d of incremental gas and over 200 Mb/d of incremental liquids growth by the end of 2027.

While the 2.0 Bcf/d of potential volumes from the Utica Volatile Oil window may seem small in proportion to those of the whole Northeast, the potential volumes being driven by oil economics rather than natural gas economics could put further pressure on Appalachia pricing.