With the cessation date of the remaining USD LIBOR (London Interbank Offered Rate) settings a year away, it is surprising to see how much work is yet to be done and how different market players are reacting to USD LIBOR and its successor, the Secured Overnight Financing Rate (SOFR). While industry participants push for the development of a SOFR-linked derivatives market, the bond market is discussed less frequently. However, debt issuance is also a critical market indicator when evaluating a benchmark rate like SOFR.


The data indicates that SOFR debt issues are increasing, especially since mid-2021, thanks to the SOFR First initiative. However, the new issues show a different landscape from the LIBOR ones, which may imply the future of the SOFR bond market.

We’re seeing a slow transition of new corporate issuance away from LIBOR and proactive activity in various alternative rates. Total issues and floating rate note (FRN) issues have remained steady in recent years; SOFR issues in 2021 are about 8% more than LIBOR issues in 2019 in terms of issue amounts. That said, corporate issuers are actively exploring different reference rate types when issuing FRNs. Those alternative reference rates are usually set in advance, compared with the set-in-arrears SOFR. As shown in Figure 1, Term SOFR issues represent approximately 7% of the total FRN issues each year. The issue amounts of FRNs referencing other alternative rates were $1-2 billion in 2020 and 2021, respectively. 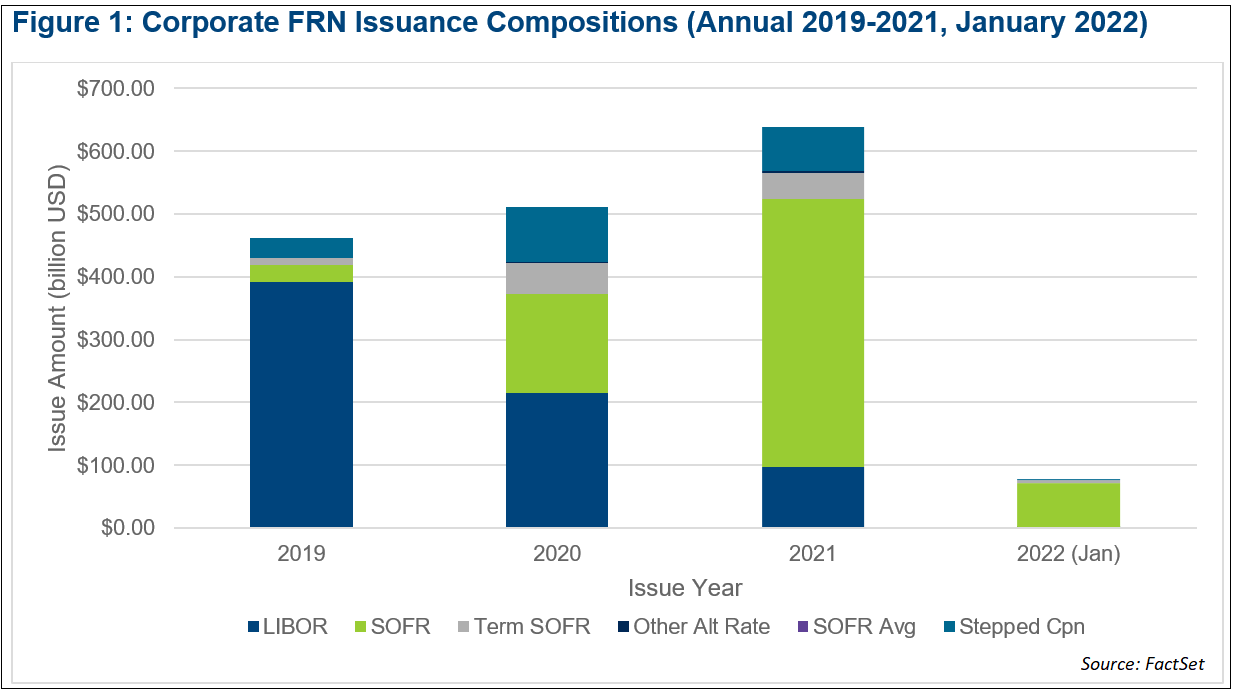 As shown in Figure 2, each maturity term represents an equal share of total issues in the LIBOR case. On the contrary, new SOFR issues appear to be mostly short term. Long-term SOFR issues represent about 19% of the total, yet most of them mature in less than 10 years. There have been requests for a set-in-advance SOFR-based index since the early stage of the transition away from LIBOR. One of the obvious reasons for this is that market participants have grown accustomed to the set-in-advance LIBOR in terms of technology, operations, and trade. Apart from the appeal of setting in advance, there are several explanations for the issuance landscape:

As a result, Term SOFR fills the need of long-term bonds to some degree. However, Term SOFR will not be a perfect supplement to the SOFR bond maturity spectrum. As we’ve previously discussed, paradoxes arise as market participants aim to develop both SOFR and Term SOFR in cash and derivatives markets. 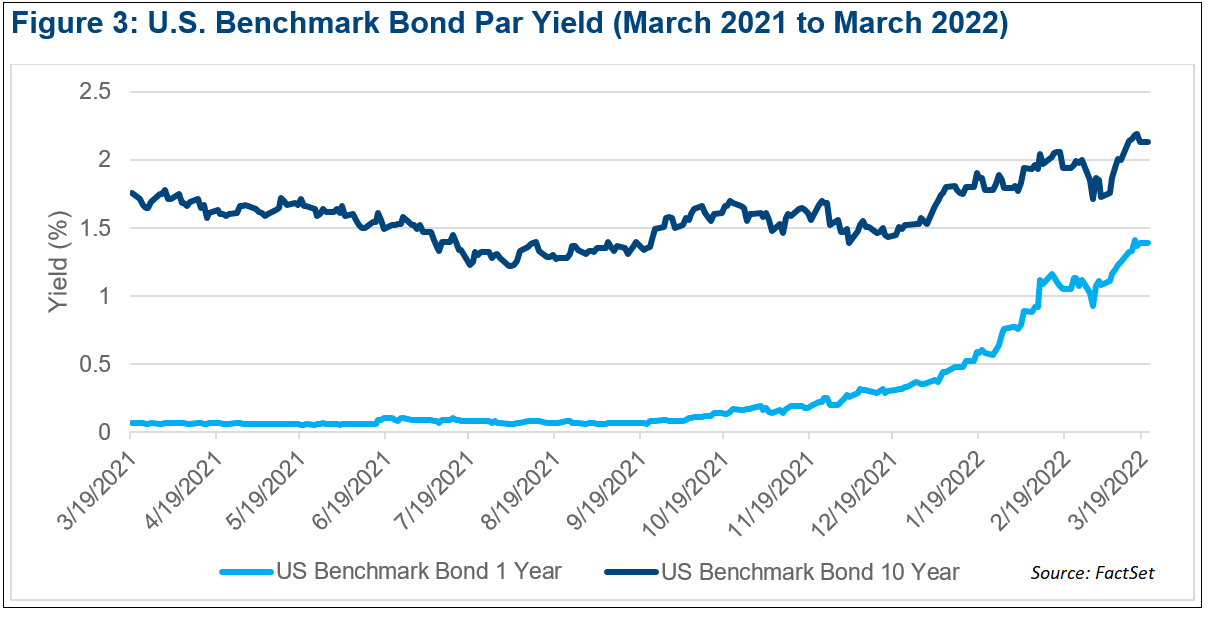 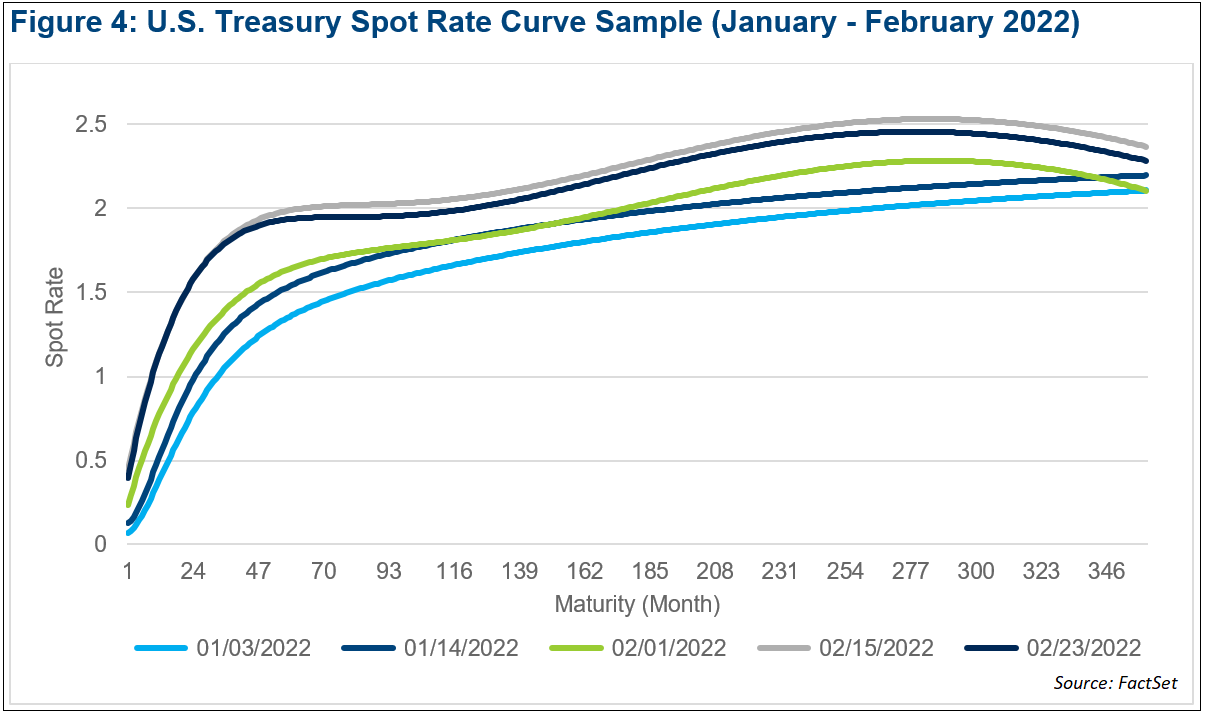 Agency Issuers Moving Away from LIBOR

Agency issuers tapped into SOFR debts as early as 2019, and the issue amount peaked in 2020. SOFR issues fell in 2021, along with the overall size of FRN issuance.

LIBOR issues have effectively fallen to zero since 2019, indicating that U.S. agencies are leading the transition movement. However, the willingness to issue SOFR debts has weakened, even with a relative surge in issuing stepped coupons and other alternative rates. The lack of clarity on Term SOFR has led to hesitation on SOFR issues. One thing that a stepped coupon bond and a LIBOR bond share is that the coupon rate is set in advance. The stepped coupon is the only coupon type that shows an increase in issue amount, while total FRN issue amounts decreased by about 70% from 2020 to 2021. With Term SOFR unveiled and officially endorsed in late 2021, we’ll keep watching the agency issuance for 2022—this may become a competition between SOFR and Term SOFR. 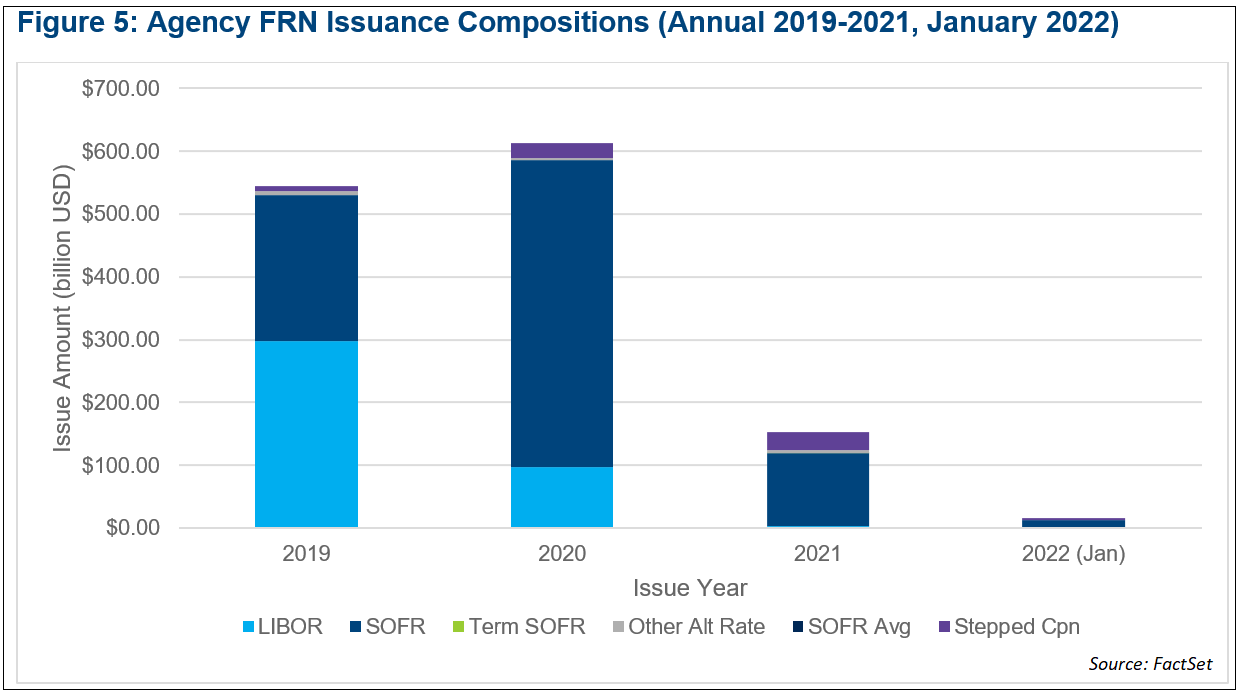 Sovereign issuers are clearly hesitant about referencing SOFR. Total SOFR issuance from 2019 to January 2022 was just $0.5 billion, compared with LIBOR issuance of around $4 billion. With LIBOR issues coming to an end, there has been an increase in stepped-coupon issues, but it is hard to conclude whether there is any direct connection between the two. There is an argument that sovereign, supranational, and agency (SSA) issuers are the best candidates to lead in SOFR bond maturity offerings. The World Bank and other agencies have launched billions of seven-year SOFR bonds in the past few months, which should get the ball rolling.

As all tenor settings of GBP and JPY LIBOR have ceased as of December 31, 2021, the Sterling Overnight Index Average (SONIA) and Tokyo Overnight Average Rate (TONAR) bond markets can serve as good indicators of the future of the SOFR bond market.

The UK bond market is smaller than the U.S. market. The UK corporate issue amount is about 8% of its U.S. counterpart, while the SSA issue amounts are even less than 8%. The UK SSA issuers are not enthusiastic about FRN issuance, let alone SONIA issuance. Corporate SONIA issuance appears to be more organic:

The Japanese bond market is more relatable to the U.S. market in terms of issue amounts. There are several reference rates in Japan that have been gaining popularity since the transition away from LIBOR, including the Tokyo Interbank Offered Rate (TIBOR), Tokyo Term Risk Free Rate (TORF), and treasury rates. As in the UK, SSA issuers in Japan are not interested in FRN issuance. As for corporate issuance, we have observed the following trends:

The U.S. bond market seems to fall between the UK and Japan markets. The U.S. market is picking up on SOFR issuance, but lacking maturity depth as seen in the UK market. There are several alternative rates gaining popularity, but nothing comes out as strong as TIBOR or treasury rates in the Japan market.

As Rome wasn’t built in a day, several milestones have been hit in the development of the SOFR bond market, but this might be the beginning of the journey. As much as we would love to see a deeper SOFR bond market, the development might not follow the path of LIBOR. With Term SOFR and the other alternative rates actively being used, the future of the FRN bond market could be more diversified yet more complicated in many ways. 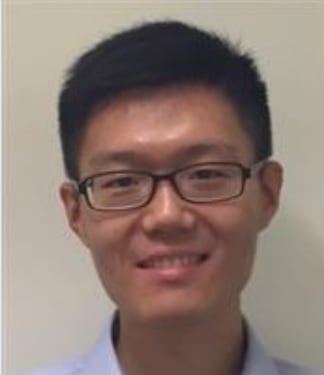 Mr. Yudi Bai is a Senior Financial Engineer for Analytics and Trading Solutions at FactSet. In this role, he focuses on corporate bonds and market rates with a current emphasis on the global LIBOR transition. Mr. Bai earned a master’s degree in Financial Mathematics from Rutgers University and a bachelor’s degree in Mathematics with a minor in Economics from Sichuan University.