While most S&P 500 companies will report earnings results for Q2 2019 over the next few weeks, about 5% of the companies in the index (24 companies) had reported earnings results for the second quarter through yesterday. Given the current expectations for a year-over-year decline in earnings for Q2 (and for Q3), have these companies discussed specific factors that had a negative impact on earnings or revenues in the second quarter (or are expected to have a negative impact in future quarters) during their earnings conference calls? 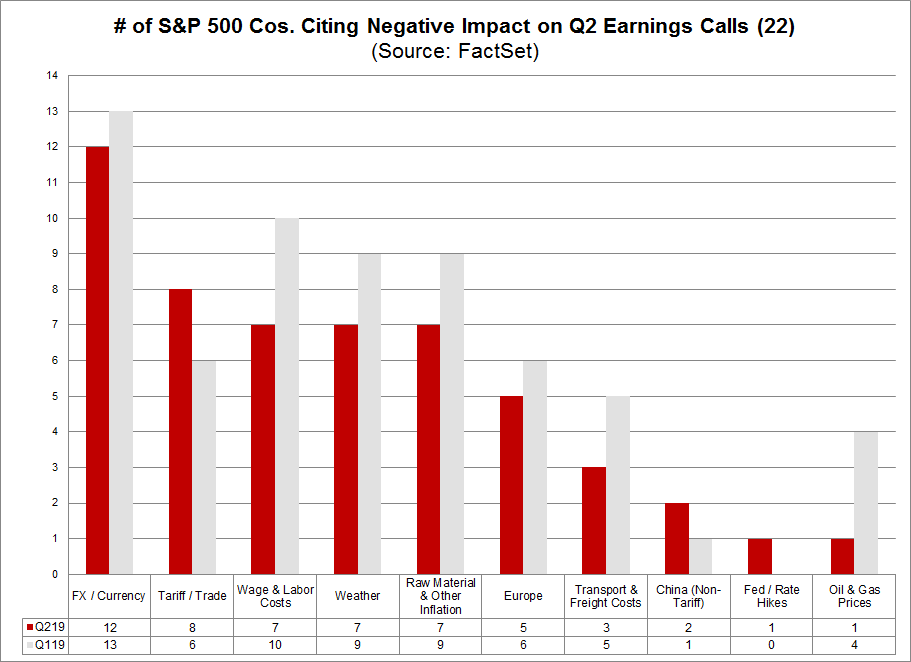 To answer this question, FactSet searched for specific terms related to several factors (i.e. “currency,” “China,” etc.) in the conference call transcripts of the 22 S&P 500 companies that had conducted second quarter earnings conference calls through yesterday (July 11) to see how many companies discussed these factors. FactSet then looked to see if the company cited a negative impact, expressed a negative sentiment (i.e. “volatility,” “uncertainty,” “pressure,” “headwind,” etc.), or discussed clear underperformance in relation to the factor for either the quarter just reported or in guidance for future quarters. FactSet also compared the number of companies citing these factors in the second quarter to the number of companies that cited these same factors in the first quarter through approximately the same point in time (through April 11). The results are shown below.

After foreign exchange, the factors with the highest number of companies citing a negative impact included tariffs and trade (8), wage and labor costs (7), weather (7), and raw material and other general inflation (7).

The Q2 bottom-up EPS estimate for the S&P 500 declined by 37.0% during the second quarter.

Have Analysts Lowered Their Ratings on S&P 500 Stocks Due to COVID-19?

Despite the negative impact on companies due to COVID-19 lockdowns, the share of buy ratings on S&P 500 stocks has increased...