Since 2010, the chemical manufacturing industry has been among the fastest-growing sources of U.S. energy demand. Chemical manufacturing is a broad category, including everything from plastics to fertilizer to pharmaceuticals. Although facilities span the globe, the industry has a meaningful U.S. presence with a heavy concentration also found in China. Overall, chemical manufacturing is highly energy and carbon intensive, and many processes require hydrocarbons as feedstocks. Excluding the production of fluorinated gases, using data from the U.S. Environmental Protection Agency (EPA) and U.S. Energy Information Administration (EIA), BTU estimates that chemical facilities in the U.S. released nearly 280 MMt of scope 1 carbon dioxide equivalent (CO2e) in 2018.

Chemical producers have responded to mounting environmental, social, and governance (ESG) pressure with plans to aggressively reduce or eliminate these emissions. The effect will likely have an outsized impact on demand for natural gas and natural gas liquids (NGLs). Though only making up 4.2% of U.S. emissions, the chemicals industry consumed 9.7% of U.S. natural gas in 2018. Here we examine the growth of energy use in chemical manufacturing and the end-use source of the emissions within the chemical manufacturing process.

The growth in natural gas demand was especially acute. Chemical manufacturing’s demand for natural gas grew by 2.7 Bcf/d from 2010 to 2018, representing a 61% share of all industrial demand growth. As of the EIA’s most recent Manufacturing Energy Consumption Survey (MECS) in 2018, the chemicals industry made up 38% of all industrial gas demand at 8.9 Bcf/d. Additionally, the industry consumed 2.4 MMb/d of NGLs, primarily ethane used as feedstock. 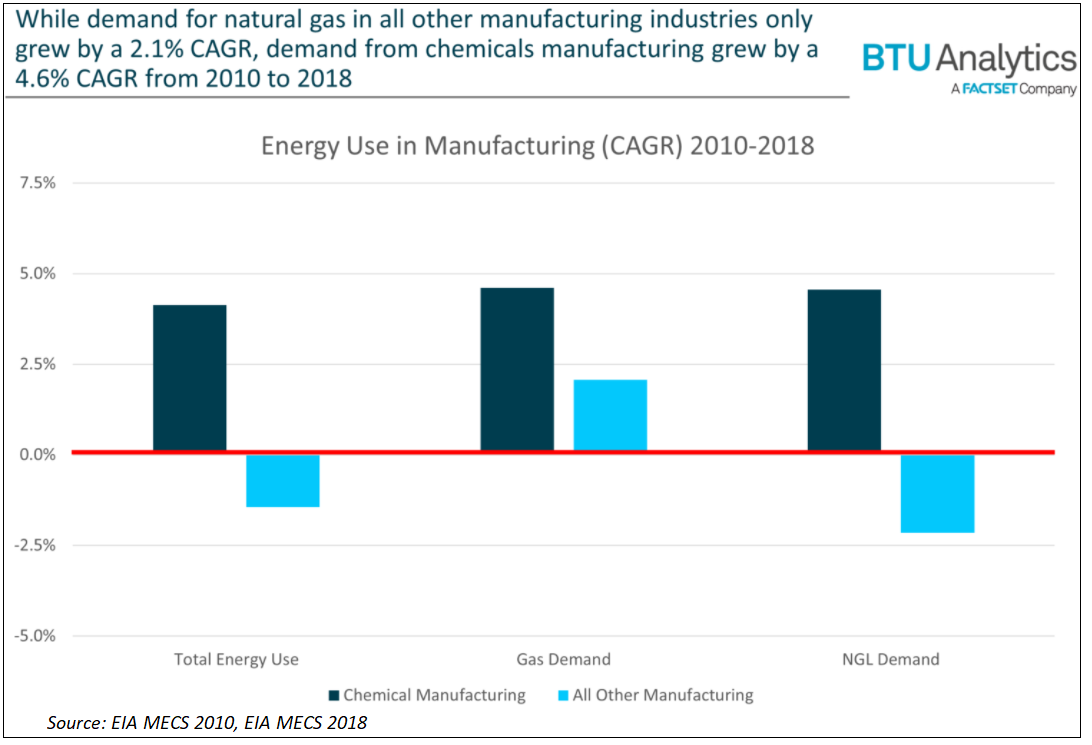 Despite this past trajectory, chemical manufacturing’s demand for energy commodities may be impacted by emerging ESG commitments. Firms promising net-zero emissions by 2050 represent a significant portion of the U.S. chemical sector. Plants owned by companies with net-zero commitments made up more than 46% of greenhouse gas emissions for chemical plants reporting to the EPA in 2020. If these companies were to achieve their net-zero goals, the chemical industry’s demand for energy could shift materially.

Strategies for Getting to Net Zero

Improvements to efficiency and carbon intensity are already underway by reducing the use of coal, recovering waste heat, and switching from steam boilers to steam/power cogeneration. This has allowed some producers to reduce carbon intensity per ton of product. However, to achieve absolute emissions reductions, each of the other three pathways will likely have to be implemented to some degree and have important implications for energy demand.

Carbon capture, in various forms, could allow the use of fossil fuels to continue in applications that are difficult to electrify. Additionally, carbon capture could help address the roughly 27% of emissions released directly from chemical reactions in manufacturing processes. Ineos, ExxonMobil, Air Products, Eastman, and Celanese are among the major firms to list carbon capture highly among their sustainability strategies.

The challenge with carbon capture is that the available technology is highly energy intensive and costly. The Global CCS Institute estimates that most chemical industry applications would cost between $50 and $90 per ton. Factored by BTU’s estimate for the industry’s 2018 scope 1 emissions, this would suggest an annual expense between $14 billion and $25 billion to capture all emissions or roughly 2-3% of the U.S. chemical industry’s gross annual revenue.

Applications are likely to be much easier in certain cases where the concentration and pressure of CO2 is much higher in flue gases, such as fertilizer and hydrogen production. The direct effect of carbon capture on energy markets would depend on the specifics of its deployment, but the indirect effects would support a stronger outlook for natural gas as it could continue to be used with less impact on producers’ scope 1 emissions goals.

The full effect of net-zero commitments will remain unclear until new emissions-reducing strategies begin to be more widely implemented. However, the potential downsides for U.S. gas and NGL markets are meaningful. Previously a source of demand growth, successful net-zero strategies may reverse that trend in coming decades.

This article is an excerpt of a longer analysis on the potential impact of ESG goals on chemical sector energy demand to be published in the upcoming Upstream Outlook report. 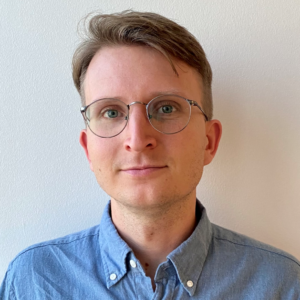