Polar bears are a poster animal for climate change. During Earth Week, we wanted to check on their progress as one aspect of climate change that may signal risk and adaptation. Despite being in distant lands and often difficult to find, the polar bear’s apex position exposes them to climate change impacts across the Arctic food chain. We’ve seen the growing impact of global warming over the past few decades, and future warming will have a multiplied impact on the Arctic region.

We first summarize some facts about polar bears and their ecosystems to develop a sense of how key variables could impact them in the future. We then examine how populations have changed in the past 30 years; in fact, polar bear populations have been holding their own if not improving over the past several years due to reduced hunting and improved conservation efforts. Looking ahead, we offer some “bull” and “bear” factors that may be important for polar bear population trajectories over the next few decades.

Sea ice is an important aspect of the polar bear’s ecosystem, and with climate warming, ice will be threatened in aerial extent, thickness, and seasonal duration. Ice also has a recursive impact on temperatures given its reflective and cooling properties. The more ice that forms in the winter months, the more it can cool the environment in the summer. Once the ice melts or if it never forms at all, the reflective expanse of the white snow is smaller on average and more of the earth is exposed to absorb sunlight, hence contributing the temperature gain in an area.

As a result of the interaction between ice, sun, and heat, the polar regions are widely expected to warm 2-3x as much as the world average, as the map below from the Intergovernmental Panel on Climate Change (IPCC) suggests (five degrees centigrade (C) is equivalent to nine degrees Fahrenheit (F)). 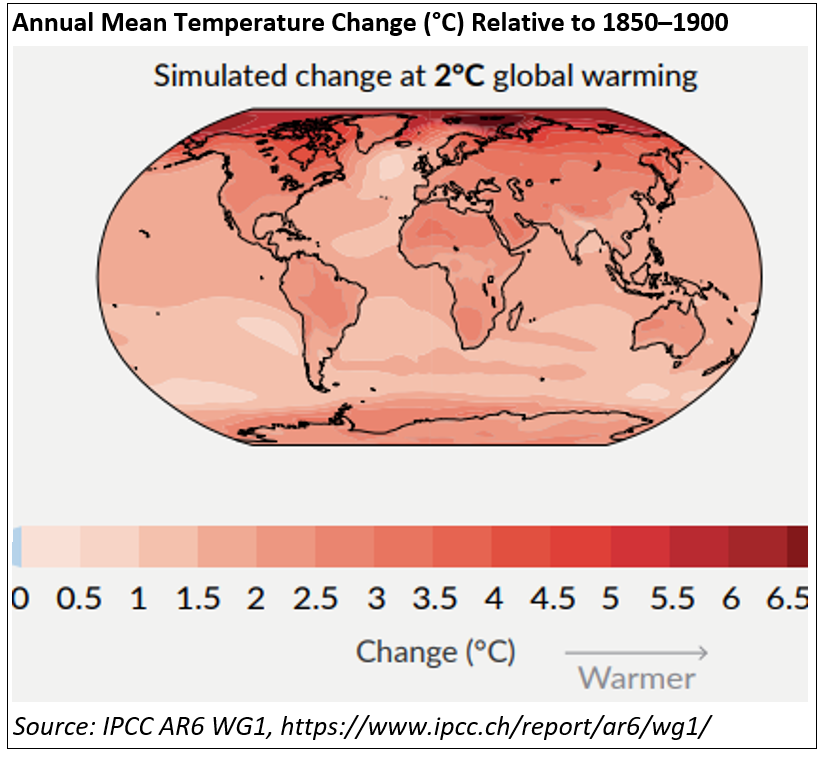 Polar bears mainly eat seals, particularly “ring seals,” the Arctic’s most populous. Bears feast on seal pups during the three to six weeks when those pups must stay on ice because they can’t swim yet or can’t stay underwater for more than a couple of minutes. In addition, adult ring seals carve air holes in ice up to three feet thick and then surface occasionally for breathing and resting. Bears will lay in waiting. Each adult bear is thought to need to consume 40-45 seals per year for sustainable health. Bears will also be looking for seal adults and other prey if available. The occasional beached whale, for example, can have the caloric equivalent of 1,000 seals.

The bears gorge themselves in the early months of the year and then go into a fasting mode for several months, which puts great importance on that window when there are both ice and baby seals in the area. While the bears might survive with less, the feared cumulative impacts over time would be reduced cub counts, and less calorie “cushion” for exertion should travel on land or swimming be required. Polar bears can swim up to 40 miles (Ursus Maritimus is their Latin name) and have been tracked on land traveling 50 miles in one day and over 600 miles per year. Bears can also lunge quickly after prey but can’t run quickly too far because they will overheat.

Polar bear females typically den near feeding areas and often in small pockets dug in drifting snow or soft earth. Drifts at windswept glacier bases are a good example of an ideal den location. Good bodyweight and health going into the annual denning period is correlated with cub health and number. Retreating glaciers and fewer stable snowdrifts could impact current denning areas and leave females denning further away from their feeding areas.

The map below from the United States Geological Survey (USGS) highlights a key aspect of the arctic: ice currents (indicated by the blue arrows on the map) that impact the ice formations in the various areas. The ice in the purpled areas is referred to as “divergent” because the ice forms along the coasts and then drifts off to be replaced by more ice during the winter. This drifting ice from the divergent zones can then run into another coastal area (shaded blue) forming “convergent” ecosystems.

In a cold winter, divergent ice can form a generally continuous plain of ice; a warmer winter could result in patches of disconnected ice floating around, potentially leaving bears stranded and seals not needing air holes. In the divergent areas, less ice creation can cause bears to drift off on “islands” of ice requiring them to swim back to shore. However, swimming can burn a lot of energy, so a better caloric strategy has been to stay closer to shore. It is in these divergent ice areas where global warming and patchy ice is thought to present the greatest risk to bears if they cannot easily range across the ice for seal prey.

The greenish and orangish areas on the ice flow map represent seasonal ice (which melts completely in summer) and a mix of ice patterns in and around an archipelagic area, respectively. About 35% of polar bears are thought to live in divergent regions, 10% in convergent zones, 20% in seasonal ice areas, and 35% among the Canadian archipelagos. Note that as many as 60-80% of polar bears live in Canada; the map illustrates that the country has each of these ice flow types.

The polar bear world is divided into 19 regions or subpopulations. Each area has different characteristics with respect to latitude, water depth, temperature range, ice presence throughout the year, ice thickness, and general ice flow direction. As a result of their differences, each ecosystem is likely to be impacted by global warming differently. Some of the more populated bear areas are the Chukchi Sea, Barents Sea, Lancaster Sound, Baffin Bay, Foxe Basin, and Davis Strait. Some of the more vulnerable ecosystems are the Beaufort Sea and Hudson Bay areas. 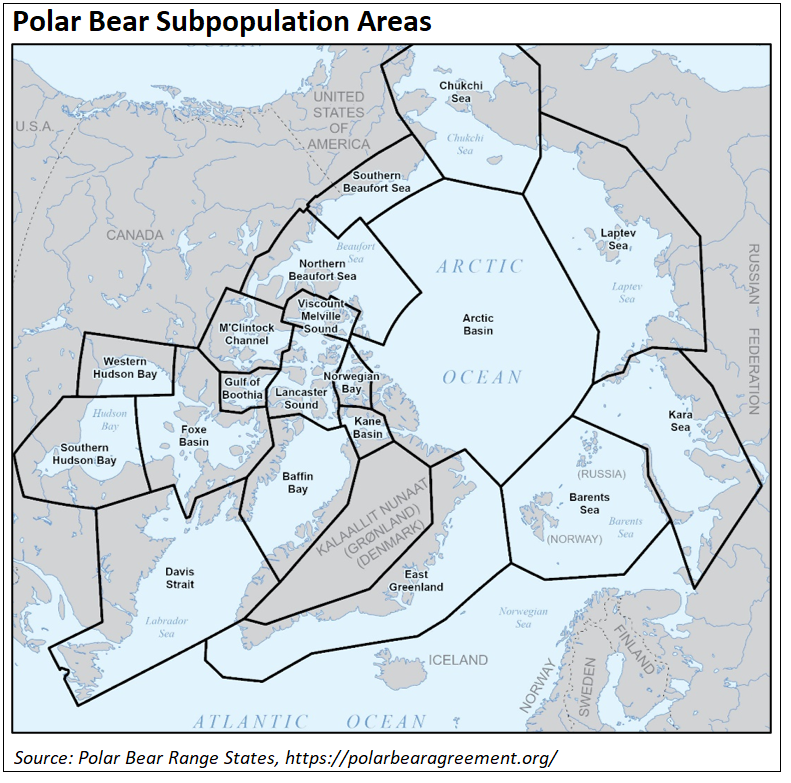 Bear population data is not available in five of the subregions and is sparse in four others, both of which create a challenge for making overall population estimates. Polar bear research is costly and time consuming and more recently has been impacted by the Covid pandemic. Various approaches are taken in the scientific research including aerial counts, mark or tag and monitor or recapture, a focus on female weight, observing den or cub counts, and interviews with indigenous peoples. The studies can be based on observed or predicted data. Often similar studies can be spaced several years apart.

Sometimes we will hear results from a particular study, say one focused on bear counts in a bay in the northeastern region of Greenland. Unfortunately, conclusions from a single study are often generalized in the media to represent all polar bear populations.

The data from all the various ecosystem studies is compiled by some groups to form a mosaic count of overall polar bear population trends. It is important to note that estimates in the mosaic vary in reliability and accuracy and because of this, even the synopses can be challenged as reflecting opinions and non-scientific evidence.

Highlight this point, two groups with different views that compile global research done across many agencies are the Polar Bear Specialist Group (PBSG) and The Global Warming Policy Foundation (GWPF). The PBSG is on the more conservative and concerned side in their assessments of polar bear population trends whereas, in contrast, the GWPF see bear populations doing well to date.

The numbers indicate that polar bear populations have been stable to growing over the past few decades; their numbers have increased from 23,000 in 1980 to 26,000 from 1995 to 2015 to 29,000 more recently (all +/-15%). Because we’re discussing climate in this article, one might conclude that bear population growth is up despite the climate change to date. That is, a slightly warmer environment is helping them.

But the primary reasons for the increases seem to be both greater restrictions on commercial and sport hunting and more thoughtful conservation and relocation efforts. Legal hunting continues on a limited basis for indigenous peoples, based on quota systems. In a population of 25,000 bears with 25-30-year life spans, the difference in the bear population trajectory with 300 versus 800 kills per year would become meaningful over time even with no climate change. The chart below from the GWPF is both a recent and a comprehensive compilation of studies and shows the variation in overall population estimates. 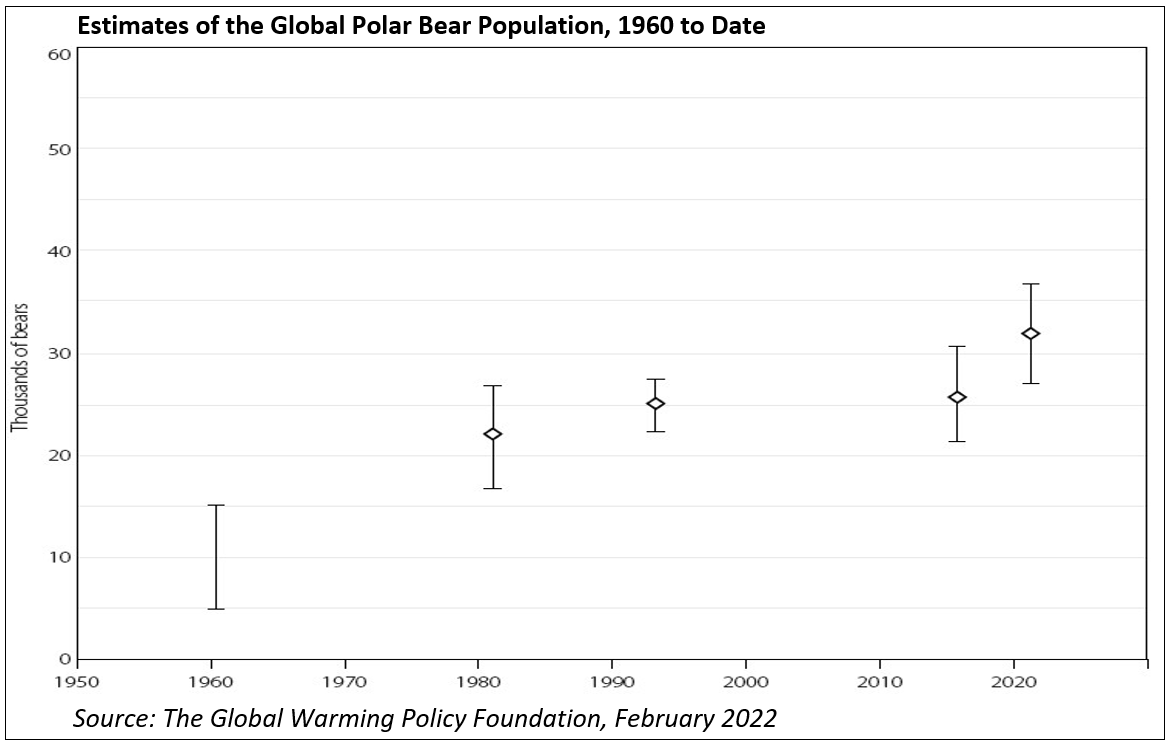 Regardless of how the polar bear has fared over the past few decades, the real question in front of us is the future of the polar bear. Optimists will focus on the recent trends and minor adaptive behavior seen by some bears as well as a continuation of fewer hunting kills by man and ever-improving conservation efforts. In addition, there is some growing evidence that the sea loading of small organisms in some areas is rising which could suggest more small fish, a larger seal population, and, at the apex of the food chain, a healthier bear population. Underlying this view is that the entire food chain will shift in such a way that the bear population thrives.

However, the bearish bear case sees the bulk of climate change and its future cumulative impacts, with much still dependent on mitigation efforts over the next 10-15 years. Risks remain. Conditions may indeed tilt favorable (i.e., more food available) for the first degree of warming but turn quickly unfavorable thereafter with the combined impacts on ice flows. Will the food chain shift? Will the bear continue to adapt? Will there be more man vs. bear situations (in which the bear loses)? In addition, if the food chain does not shift, there is uncertainty about the cumulative impacts of shorter eating seasons, denning areas further afield, a more acidic ocean as temperatures rise, and increased ship traffic (spills, noise, general habitat interruption) enabled by thinner ice cover.