Tellurian’s Driftwood LNG is suddenly very close to being the next U.S. liquefied natural gas (LNG) facility to reach market. After recent sale and purchase agreements (SPAs) with Gunvor and Vitol, Tellurian could move forward with construction of the facility as early as this year, despite not yet making an official final investment decision (FID). However, while the facility appears to be moving forward, Tellurian has not officially revived some proposed long-haul pipeline projects, raising concerns of how the project will be supplied. Given current constraints in the North to South Louisiana corridor, Driftwood LNG could exacerbate LNG supply questions along the Gulf Coast if not accompanied by new pipeline infrastructure.

The Version of Driftwood LNG’s Facility and Supply Constraints

The impact of Driftwood LNG on supply constraints in Southern Louisiana will ultimately depend on what version of the facility makes it to commercial service. The project was initially proposed with two phases consisting of up to six mega-trains with a total nameplate capacity of 3.63 Bcf/d. However, delays, cost increases, and difficulty securing commercial agreements has led to the project being scaled back to potentially just the first phase of the project. If completed in full, Driftwood LNG would become the second-largest facility in the U.S., trailing Cheniere’s Sabine Pass facility. Just phase 1 of the project is a smaller, but still substantial, 2.18 Bcf/d, placing it in the same ballpark as existing facilities at Corpus Christi and Freeport. 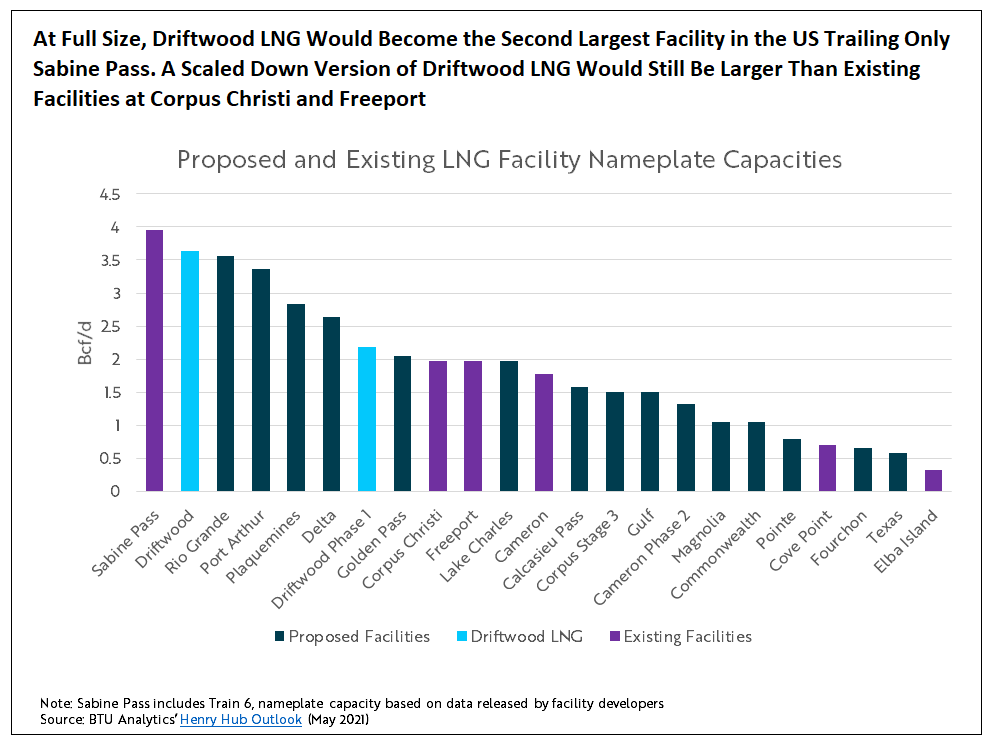 The COVID-19 Pandemic and Pipeline Projects

Scaling back the liquefaction facility has also come with scaled back infrastructure plans. Tellurian had initially proposed three separate 2 Bcf/d pipelines that would bring in supply from the Permian (Permian Global Access), the Haynesville (Haynesville Global Access), and Perryville (Delhi Connector). However, all three of those projects have been put on hold indefinitely in the wake of the COVID-19 pandemic.

While the facility will likely be accompanied by the 4 Bcf/d Driftwood Pipeline, the pipeline will not reach back farther than Evangeline Parish. That is of little use to the facility if the constraint from North to South Louisiana is not alleviated by additional pipeline buildout to supply areas outside of the Gulf Coast. The same can be said for the recent filing by Driftwood Pipeline LLC seeking to build dual 42-inch pipelines that would increase capacity between Beauregard and Calcasieu parishes. While that project could help alleviate some constraints near Gillis, LA, it does not increase the capacity for inbound supply.

Driven by strong LNG exports out of Southern Louisiana, utilization along the North to South corridor averaged over 90% in April and May. With Calcasieu Pass set to come online later this year, and another train being added to Sabine Pass in 2022, the approximately 1-1.5 Bcf/d of open capacity remaining across all pipelines could be gone long before Driftwood LNG enters service. While multiple publicly announced projects appear to increase future capacity, many of the projects are either already committed to other LNG facilities or have failed to gain significant traction. Outside of Columbia Gulf’s Louisiana Xpress Project, Tellurian may be forced to revive one of their proposed greenfield projects or risk not being able to adequately supply a new LNG facility. 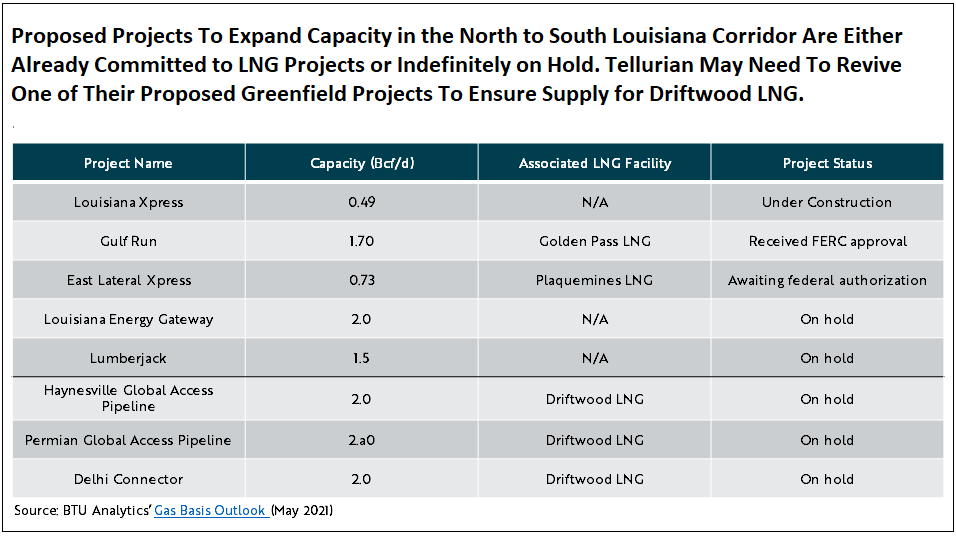 After a challenging 2020 that saw no new facilities reach FID, recent momentum for Driftwood LNG could represent a return of optimism for future growth in U.S. LNG export capacity. However, as BTU Analytics detailed in our 2019 Getting to the Gulf study, continued buildout of pipeline infrastructure will be crucial for supplying new LNG facilities along the U.S. Gulf Coast. BTU Analytics’ forecast for U.S. LNG exports and a running list of proposed facilities can be found in our monthly Henry Hub Outlook.

This article was originally published on the BTU Analytics web site.