September was another strong month for ETF flows, with $16.4 billion flowing in. At almost $160 billion in flows so far this year, 2016 could end up being the biggest year ever for ETFs.

Normally, we can look at ETF flows to get a “tea leaf” reading on investor sentiment, but honestly, this month, investors seemed to like everything. 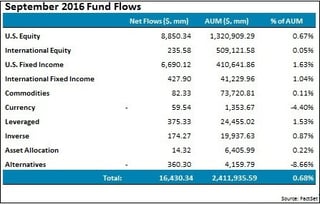 With the exception of Currency (which hasn’t had a month of strong inflows in ages) and alternatives (where the iPath S&P 500 VIX Short-Term Futures ETN, VXX, had a rare negative month) every major asset class got some love, particularly in the US. So let’s unpack the winners:

That big number for XLRE comes as a result of the spinout of Real Estate from the Financials bucket in the GICS classification system. That change, which happened on September 9, meant that shareholders of XLF were all handed shares of XLRE as a special one-time dividend.  On top of that, XLRE also just had exogenous inflows, as, perhaps, investors started paying attention to real estate now that it’s a separate sector from financials. Financials, for their part, had a slightly negative month for flows (down $1.4 billion), although that discounts the impact of the financial ETFs real estate distributions. By convention, a “distribution” no matter how special isn’t considered an outflow, since it doesn’t result from redemption activity.

Also of note in the above table are flows into the Vanguard and iShares S&P 500 ETFs, VOO, and IVV. That’s notable because SPY actually had outflows last month, suggesting that the “traders'” vehicle may be continuing to lose out to the “buy and hold” vehicles.

Last, check out the $1.1 billion in inflows into VanEck Vectors Gold Miners ETF, GDX. That’s the first big inflow for GDX in over a year, and it lines up with the year-to-date love affair investors are having with Gold. The SPDR Gold Trust (GLD) is the biggest winner of the year, with over $12 billion in new cash so far.

Looking at the league tables, we see that pattern of wins for those three firms plays out as well: 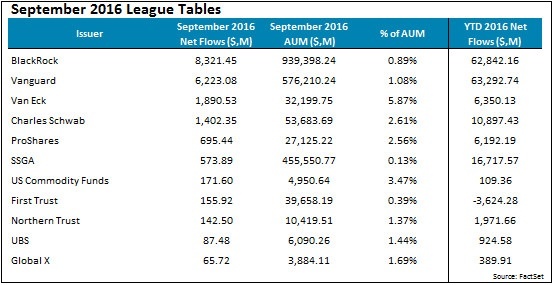 BlackRock and Vanguard had a stellar month, and obviously GDX’s success was big for Van Eck. Of note here, however, is Charles Schwab. Another good month for Schwab is making it one of the stories of the year. It’s now firmly in fourth place by total assets, behind Invesco Powershares (absent from the above chart, as it had negative flows last month). That growth has been across Schwab’s entire lineup, not just one fund. Everyone of Schwab’s funds has had positive net inflows for the year. Everyone had positive flows last month (but for Schwab’s US Large Cap Value ETF, which had slight outflows of $5 million). Even Schwab’s Smart Beta ETFs – the Fundamental Series – is pulling in significant assets. This just goes to show how important a captive distribution environment, and perhaps a custom robo-advice platform, can be in growing ETF assets.

I thought it might be a good time to check in on how various Smart Beta strategies have been doing. On FactSet, we track a field called “Strategy” that breaks out funds that track particular factors or combinations, or that employ other smart-beta strategies like currency hedging.

In September, traditional factors held the most sway:

The surprise here is seeing the surprising return of growth funds. After a year in which virtually all growth strategies had outflows, most growth ETFs had modest inflows in September. The reason here is somewhat puzzling; there wasn’t a dramatic difference in performance between the broad market and growth in September. Perhaps it’s just a belief that big growth names like Apple and Facebook are going to drive the economy forward going into the holiday season.

But for the year so far, the most dominant Smart Beta strategy has remained low volatility, with value and dividends not far behind:

It’s notable that while low volatility funds haven’t been gaining much in assets, they’ve managed to hang on to much of their early-year flows, showing the believers remain believers.

With $160 billion in net flows, the next few months would have to be extremely good for ETFs to have all-time record flows (which would be, by my reckoning, 2014’s $243 billion). But a “good” month for ETF inflows can easily be $40 billion, so it would only take a small uptick in investor interest to put 2016 on track. To me, the more interesting question is whether we’ll continue to see the “rising tide” phenomenon in flows, where all classes of ETFs are equally growing, or whether we’ll go back to more cyclical rotation between sectors and asset classes.