The US went from exporting less than 1 Bcf/d in 2016 to over 12 Bcf/d by 2Q22, and that number could get as high as 24 Bcf/d by 2027 via incremental LNG export capacity coming online over the next several years. Now, the fact that LNG export capacity is increasing isn’t the only important aspect of LNG’s impact on the Southeast. Where these facilities are located is also noteworthy. For a list of facilities and locations BTU expects to come online, request a copy of our Henry Hub Outlook. 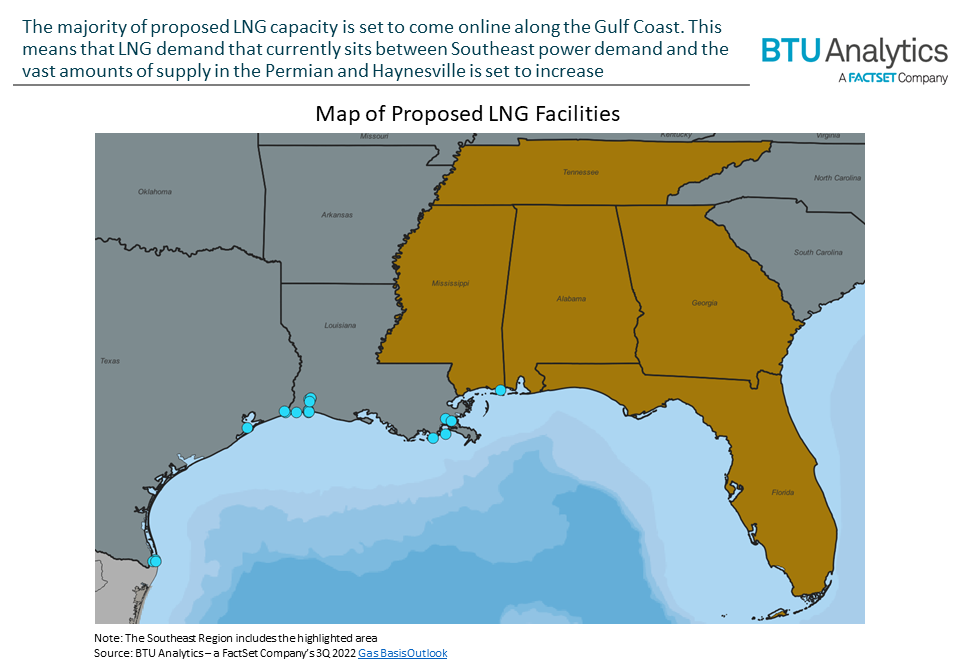 Evidenced in the map above, most of the existing and planned LNG export capacity in the US lies along the Gulf Coast, with some additional capacity also situated on the Atlantic Coast. This concentration puts LNG demand in direct competition with the Southeast region’s natural gas-fired power demand.

Historically, the Southeast region has obtained a significant amount of its supply of natural gas from the Marcellus in Appalachia or the Haynesville in northwest Louisiana and east Texas. This is because the large amount of natural gas production occurring in each play and infrastructure connecting said supply with Southeast demand created favorable pricing from all areas, especially when compared to delivered coal prices. However, as gas supply and power demand have both increased, new infrastructure connecting the two has slowed, largely due to the unfavorable regulatory environment that now exists, especially in Appalachia. This, and the increase of LNG demand, has led to the picture we see below. This summer broke the historical pattern of tight differentials. July 2022 revealed a distinctly different dynamic as basis at Zone 4 averaged $3.04/MMBtu for the month and reached a peak of $5.05/MMBtu on July 27. 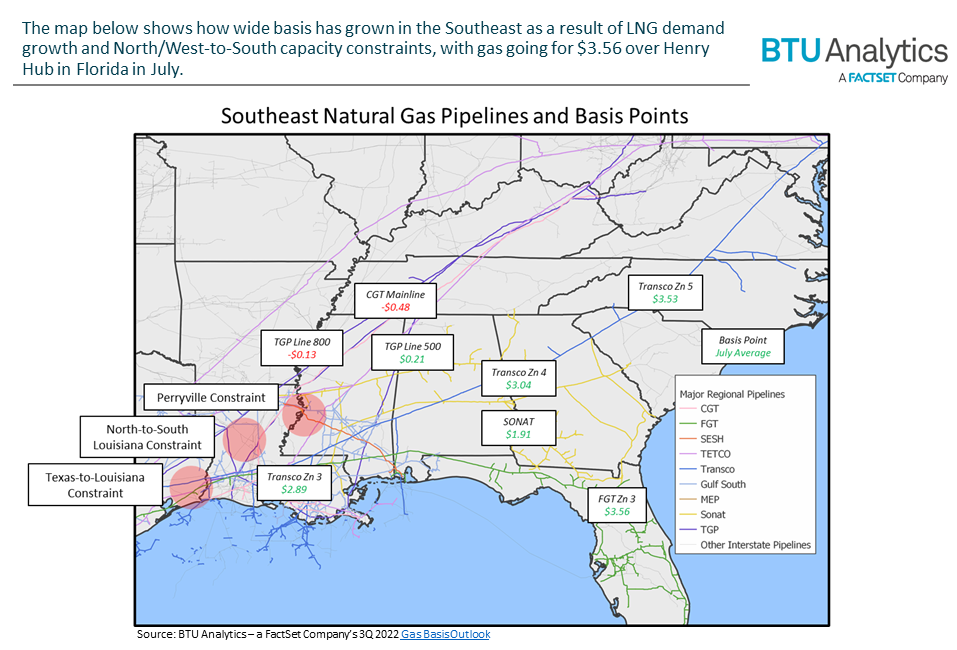 As seen in the map above, price points on Transco, FGT, and SONAT saw particularly high prices compared to what had become typical for these pipes. The price run did not appear to extend to TGP or CGT, both of which remained relatively tight to Henry Hub during this period. Also seen above are three constraint points in Louisiana, which created a wall that divided those more central pipelines from the network that serves demand in Alabama, Georgia, and Florida. The Transco system is especially worthy of attention, as basis widened even at Zone 3 in Louisiana and Mississippi. The widening of basis this far west suggests that the blowout was not merely the result of acute local demand in Florida or Georgia but was in fact the result of a system-wide scarcity of gas.

Of course, the immediate cause of this blowout was the combination of extreme heat, high power demand, and historically expensive coal that limited fuel-switching. However, this stress test also revealed how structural changes in Southeast power markets and growth in LNG have stressed the natural gas grid’s ability to serve both simultaneously.

Going forward, BTU expects that the Southeast will find itself further entrenched in competition with LNG demand. Additional coal-fired generation will be retired and replaced by gas-fired generation, and LNG export capacity will likely be developed along the Gulf Coast. Possible remedies could come in the form of incremental pipeline capacity coming out of the Haynesville or Permian. The other remedy, which BTU recently discussed in a separate Energy Market Insight, is the continued growth of renewables-fired generation, such as wind or solar. For a more in depth look into Southeast natural gas markets and gas prices, check out BTU’s Gas Basis Outlook. 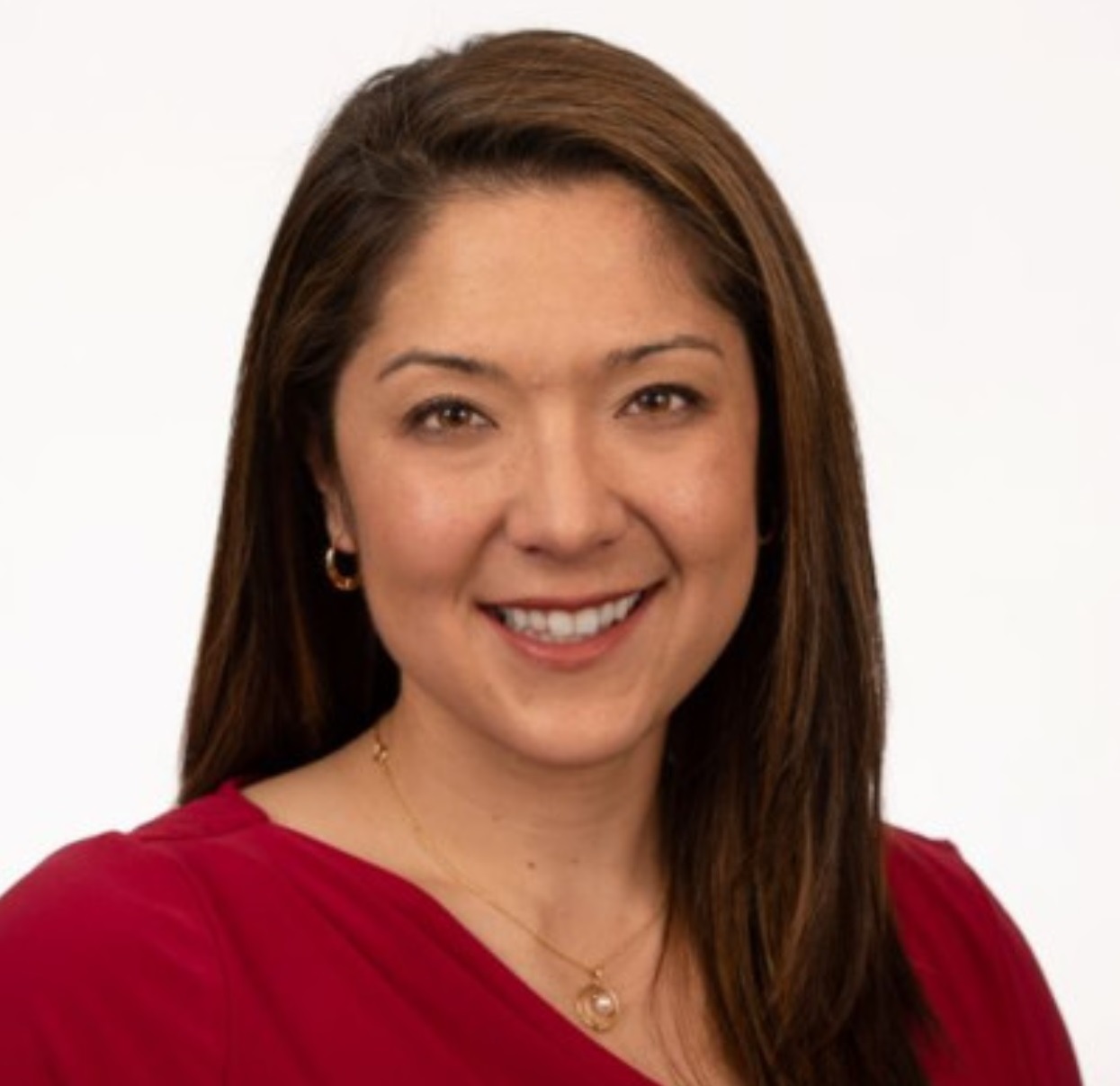 Ms. Erika Coombs is Senior Manager of Energy Deep Sector Content at FactSet. In this role, she leads the team to deliver customized energy-market analysis and provides customers with critical information for a variety of energy markets including oil, gas, and NGLs from wellhead to downstream markets. Prior, she was Manager of Consulting Services at BTU Analytics, which was acquired by FactSet in 2021. Ms. Coombs earned an M.S. in Mineral and Energy Economics from the Colorado School of Mines.