In terms of estimate revisions for companies in the S&P 500, analysts made larger cuts than average to earnings estimates for Q4 2019 during the quarter. On a per-share basis, estimated earnings for the fourth quarter decreased by 4.7% from September 30 through December 31. This percentage decline was larger than the five-year average (-3.3%), the 10-year average (-3.1%), and the 15-year average (-4.4%) for a quarter.

Because of the net downward revisions to earnings estimates, the estimated (year-over-year) earnings decline for Q4 2019 is -2.0% today compared to the estimated (year-over-year) earnings growth rate of 2.5% on September 30. If -2.0% is the actual decline for the quarter, it will mark the first time the index has reported four straight quarters of year-over-year declines in earnings since Q3 2015 through Q2 2016. Five sectors are predicted to report year-over-year earnings growth, led by the Utilities and Financials sectors. Six sectors are projected to report a year-over-year decline in earnings, led by the Energy, Consumer Discretionary, and Materials sectors. 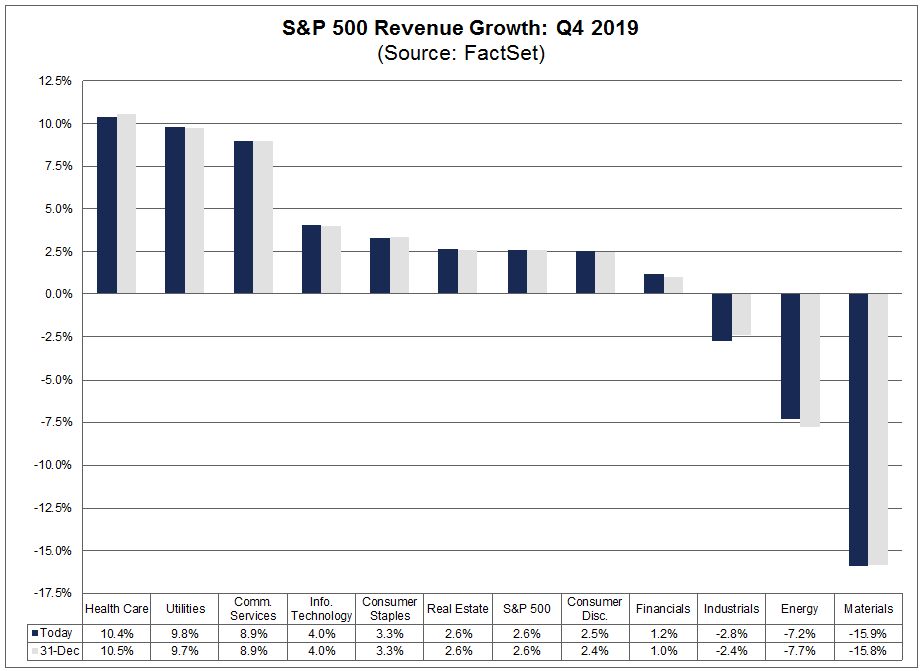 Looking at future quarters, analysts see earnings growth between 4.5% and 6.5% for the first half of 2020.

During the upcoming week, 24 S&P 500 companies (including three Dow 30 components) are scheduled to report results for the fourth quarter.