With more than 90% of companies in the STOXX Europe 600 having reported fourth-quarter earnings, it’s clear that companies are performing better than expected just a few months ago. Back in September 2020, analysts were projecting negative EPS growth of 16%; with earnings season now close to being finished, the reported earnings decline for the quarter was just 4%. While we saw a clear improvement across European companies in the final quarter of 2020, Europe is still struggling with negative growth compared to the S&P 500, which is showing slight positive growth year over year.

If we start with the similarities with the U.S., Energy continues to be a drag on both the U.S. and European markets. However, Industrials is the best performing sector in Europe, reporting a hefty 122% earnings growth while the comparable sector in the S&P 500 keeps struggling with a 55% earnings decline.

Financials Continue to Be a Drag on European Earnings

Back in the second quarter of last year, STOXX Europe 600 had no sectors reporting earnings growth and the index reported a 65% decline on aggregate, showing the extreme effects of the pandemic on the European economy. For the fourth quarter, the index is still showing a slight earnings decline year over year but there are positives in the form of significant earnings growth for the Industrials, Utilities, and Telecommunications sectors. While headwinds continued to affect the Energy and Financials sectors in the second half of 2020, Real Estate is showing significant earnings decline for the fourth quarter (48%) compared to the second quarter (0%). With seven sectors showing positive earnings growth and only four reporting negative growth, the main effect on the overall index comes from the Financials sector. Because this sector represents over 20% of the STOXX Europe 600 earnings weight, as long as Financials performs poorly, it will continue to be a drag on growth in the region.

While companies were able to increase efficiencies and dampen the hit to earnings, the region still struggled on the revenue front with an 8% decline in revenues in the fourth quarter. Seven sectors reported year-over-year revenue declines while four reported revenue growth. This is the exact opposite of what we saw with earnings in the region. The constant was the Energy sector, which reported the sharpest growth declines of all sectors for both earnings and revenue. 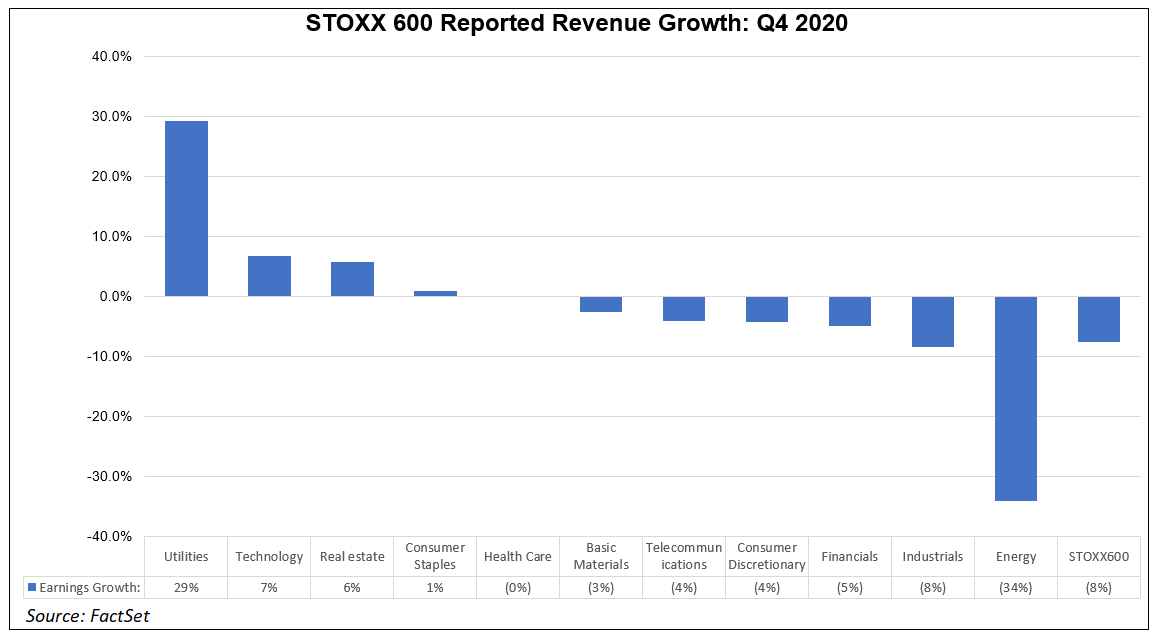 In terms of earnings, the percentage of companies reporting actual earnings above estimates was 57% while 33% came in below expectations. On aggregate, companies are reporting earnings that are 13% above estimates, yet reported earnings still declined by 4% compared to the fourth quarter of 2019 as companies continue to be negatively affected by COVID-19. Even though the sector reported the second-worst earnings growth in the region (-48%), Real Estate reported the largest positive surprise with 91% of companies beating analyst estimates. Utilities was the most negative sector with 55% of companies coming in below estimates. Due to a continued lack of guidance for the fourth quarter, analysts had a hard time making their predictions as shown by the low number of companies reporting actual results in-line with estimates compared to the past five years. 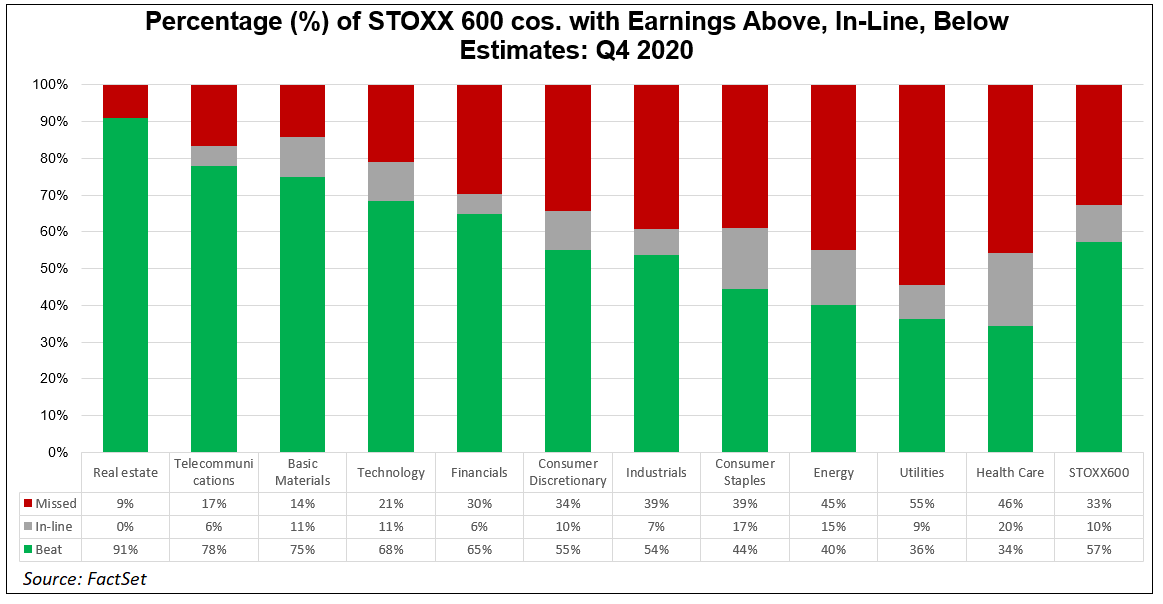 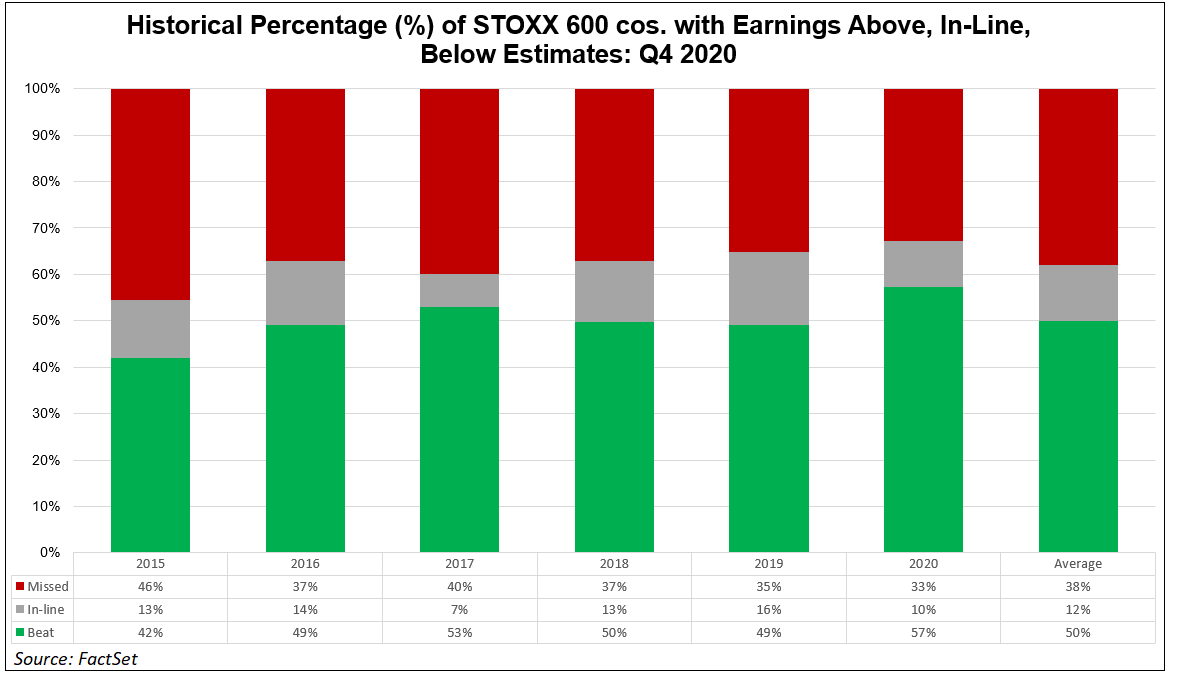 On the revenue side, most companies on the STOXX 600 came in-line with consensus (43%) while 38% beat estimates. On aggregate, companies are reporting revenues that are 3% above estimates. Even though Financials, Real Estate, and Energy were the main reasons for the negative growth in Europe, these sectors still had the highest revenue beats compared to analyst expectations. 63% of companies in the Utilities sector came in below expectations, which echoes what we saw in the second quarter when 69% of Utilities came in below expectations on revenue even though the sector had significant earnings and revenue growth on a year-over-year basis. 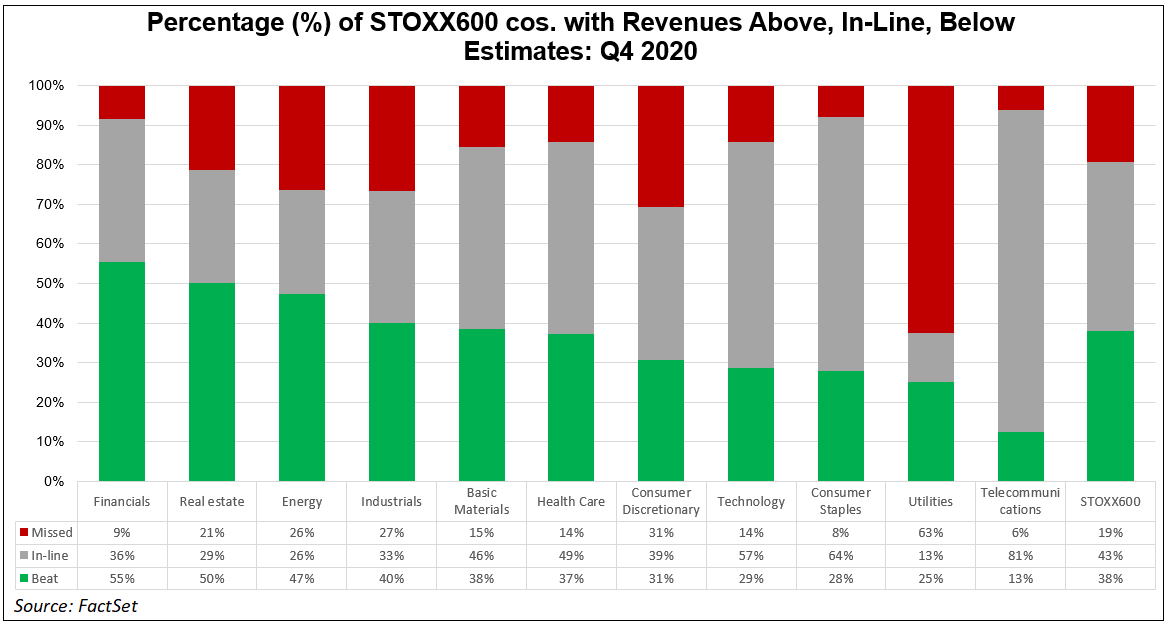 It’s clear that analysts were able to better estimate fourth-quarter revenue figures than they were for the second quarter; the percentage of in-line revenue actuals increased to 43% from 32%, more closely aligning with the five-year average. In the second quarter, only 32% of revenue actuals were in-line with estimates, a significantly lower percentage than we’ve seen over the past five years. Even with the improvement from the second quarter, the fourth quarter of 2020 still had a lower percentage of companies reporting in-line compared to the historical average as shown below. Rather, companies performed better than analysts expected, which can be explained by cautious estimates and a continued lack of company guidance into the fiscal year-end. 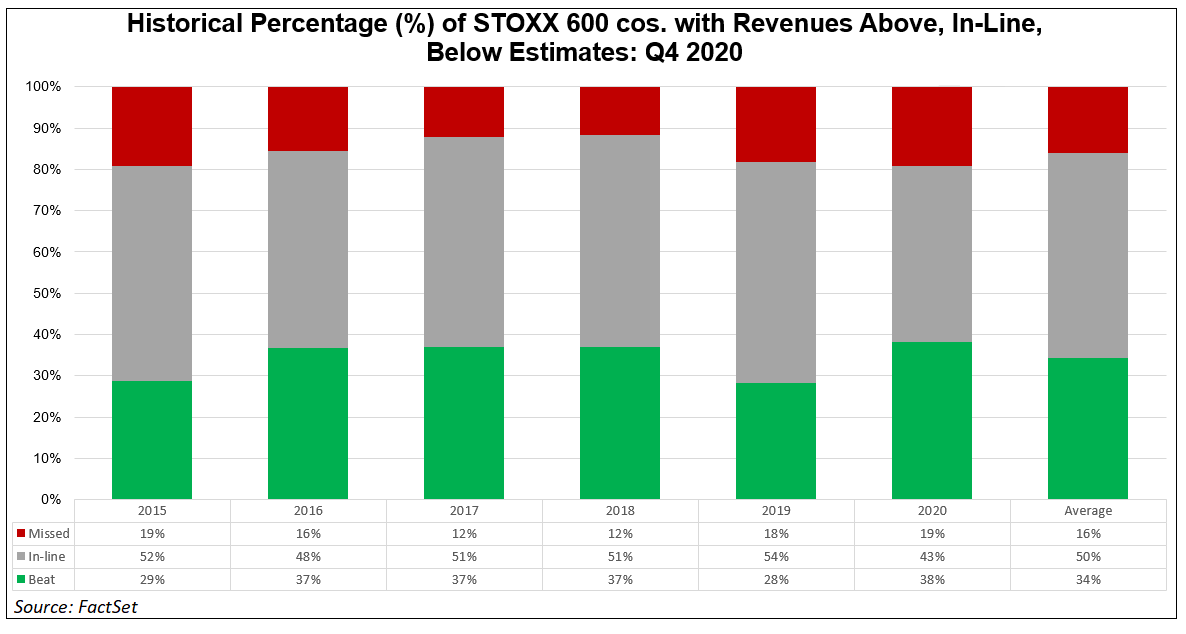 Analysts see European earnings taking off in the first quarter with growth estimates currently at 44%, up from 35% in September, driven by high growth expectations for Industrials (157%) and Consumer Staples (150%). The market expects positive earnings growth for the quarter for all sectors apart from Health Care (-14%) and Utilities (-2%). For CY 2021, analysts are now expecting a 37% earnings increase, indicating increased optimism compared to the projected 32% earnings increase back in December. As the vaccination continues to be rolled out in Europe and across the globe, markets will continue to be affected by short-term sentiment as companies try to return to the new normal.