As the oil and gas industry continues to focus on emissions reduction, multiple states are helping speed up those cuts through legislation. New Mexico has announced ambitious plans to reach net-zero emissions by 2050, but Colorado already has some of the strictest regulations on oil and gas operations.

In fact, Colorado’s grip is tightening. Following the adoption of Senate Bill 181 in 2019, the state announced its greenhouse gas (GHG) Pollution Reduction Roadmap in 2020, which targets a 26% reduction in total GHG pollution from 2005 levels by 2025, a 50% reduction by 2030, and a 90% reduction by 2050. Achieving this goal will require significant action outside of oil and gas production, but here we will focus on one of the February 2021 regulatory changes to significantly reduce emissions from oil and gas production: emissions reduction from natural-gas-driven pneumatic devices.

Emissions in the DJ Basin

Oil and gas production expanded in the DJ Basin throughout the decade leading up to the COVID-19 pandemic and with it came a rise in emissions from oil and gas producers. As shown in the chart below, upstream emissions from five of the largest publicly traded producers in the region (Chevron, Civitas, EOG, Occidental, and PDC) rose by 88% from 2011 to 2019, according to EPA FLIGHT data.

However, this came with a meteoric rise in oil and gas production from those producers, meaning that emissions intensity, expressed in metric of CO2 equivalent per thousand barrels of oil equivalent in the chart below, actually fell by 67% over this timeframe. While much of this reduction in equivalent emissions came from methane, that gas still represents 43% of total emissions in the DJ. Methane has a 100-year global warming potential 28-34 times that of CO2, but is also short-lived compared to CO2, meaning that near-term reductions can have an outsized impact on reaching global warming targets by 2050. 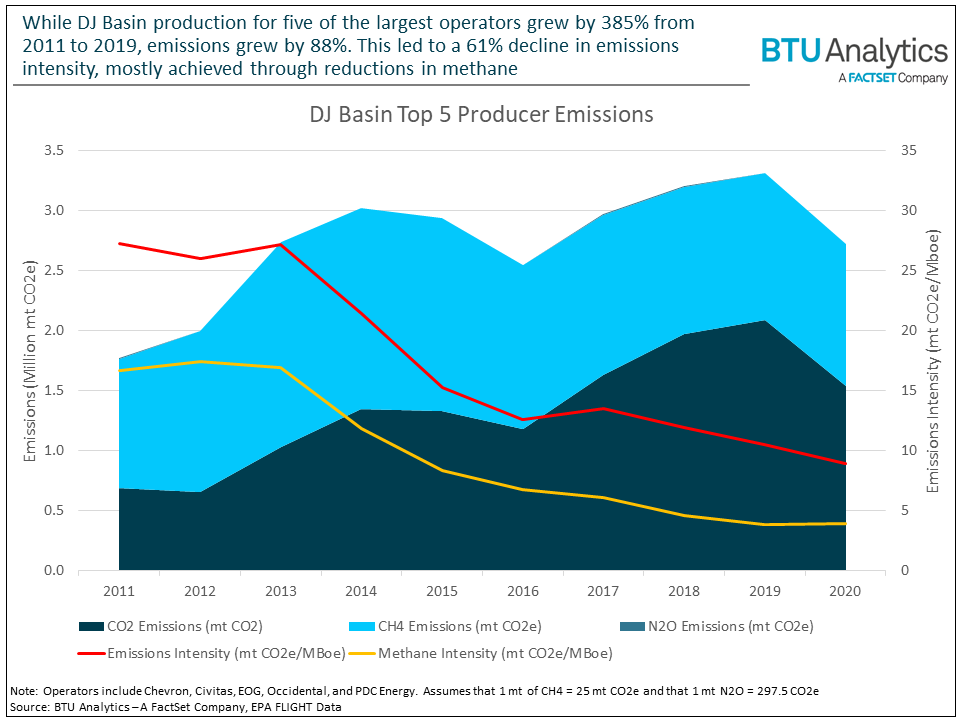 The Importance of Pneumatic Devices

One of the largest methane emissions sources for many producers comes from pneumatic devices. Under that umbrella are pneumatic controllers, which can release methane during the actuation of a valve to maintain pressure, temperature, or liquids levels. Producers are likely targeting emissions reduction from many other sources like drilling rigs, frac crews, and workovers. However, Colorado’s Air Quality Control Commission has designated that all production facilities that were brought online beginning in May 2021 or produce more than 15 boe/d use non-emitting pneumatic controllers by May 2023. 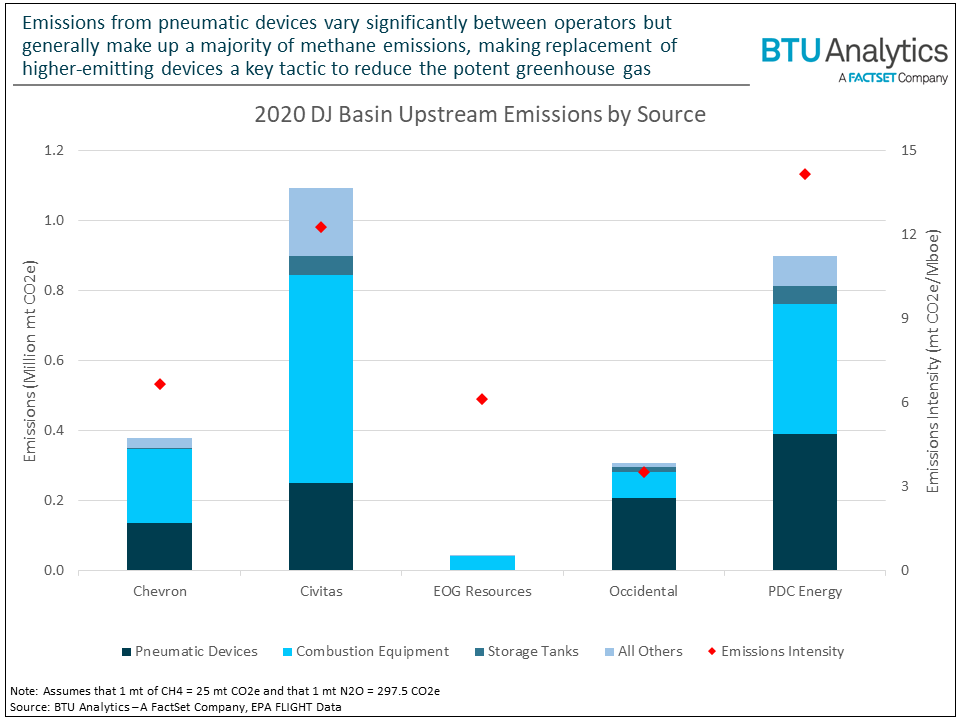 However, the chart above shows that emissions from pneumatic devices vary significantly from operator to operator, mostly dependent on the types of devices used. EOG, for example, uses only low- or no-bleed pneumatic devices in its mostly Wyoming-based DJ Basin operations. This drives EOG’s methane intensity in the region to a fraction of other public operators in the region. The table below shows the average annual emissions for intermittent bleed vs. low-bleed pneumatic devices in the DJ Basin in 2020. Transitioning to only low-bleed devices, as EOG has done, can reduce total emissions for this segment by nearly 90%.

Many producers have laid out plans to phase out higher-bleed pneumatic devices to reduce emissions in their upstream operations. However, this does not come without cost and will likely take time to implement given the sheer quantity that exists across the various shale basins in the U.S. Regulation in Colorado is helping to speed up this transition, but most other oil-producing states have not passed such legislation. While emissions reduction will require an “all-of-the-above” approach, replacing natural-gas-emitting pneumatic devices can have a huge impact on reducing powerful methane emissions.

SEC Proposal on Climate-Related Disclosures: The Expected Impact on Companies and Investors

The SEC’s highly anticipated proposal on climate disclosure spells out expanded rules on what companies would be required to...

During Earth Week, we wanted to check on the progress of polar bears as one aspect of climate change that may signal risk and...

Earth Day and ESG: The Stakeholder View of Top Firms

Here we examine the companies and industries with the biggest impact on the environment, beyond simply climate concerns.

FactSet delved into the subset of women in managerial or leadership roles at corporations to understand how they fared in 2021.