There were nearly twice as many U.S. initial public offerings (IPOs) in 2020 compared to 2019—491 to 264, respectively. But across all industry sectors, nearly half of these companies were not immediately part of any industry at all. They were SPACs: special purpose acquisition companies or “blank check companies,” created for the sole purpose of raising capital through IPOs to acquire other companies.

Last year’s surge in SPAC IPOs is well-documented; SPAC ownership includes hedge funds, private equity firms, and now wealthy family offices and sovereign wealth funds. But who are the founders and CEOs behind SPACs? How do they compare to the leaders that took the traditional route to list their companies?

Analysis from BoardEx, which specializes in people intelligence, offers insights into the leaders of SPACs. Here’s a closer look at the CEOs behind the SPAC IPOs of 2020—their backgrounds, expertise, and personal brands.

IPO activity skyrocketed in 2020 as founders and investors took advantage of high valuations and low-interest rates, reviving a vehicle that had gone out of fashion to take their companies public. About 53% of these companies were traditional IPOs from familiar industries like health, pharma, financial, food and beverage, and engineering and technology sectors, among others. 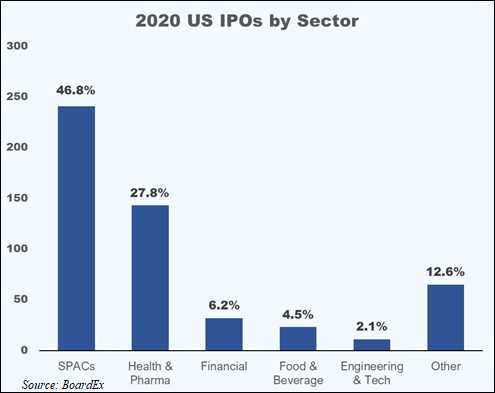 Karp’s experience is typical of leaders behind traditional IPOs. In addition to several other leadership roles, he spent years building a private company—the journey to its IPO in 2020 was a long one. Although CEOs of SPAC IPOs have similarly impressive backgrounds, their experiences contrast in several unique ways.

The Leaders Behind the Resurgent SPAC Trend

Here we take a closer look at some of the critical data about the 2020 SPAC CEOs and how they compare to CEOs of traditional companies across gender balance, age, expertise, and other characteristics. In addition, we examine why Chamath Palihapitiya, CEO of Social Capital Hedosophia Holdings, exemplifies the leaders behind this resurgent trend.

Only 20 women have ever led an IPO. This trend did not change in 2020 when only 2% of female CEOs of SPACs raised capital in an IPO that year. They include Mary Powell, the former CEO of Green Mountain Power who co-led the Climate Change Crisis Real Impact I Acquisition Corporation—a SPAC focused on climate technology. 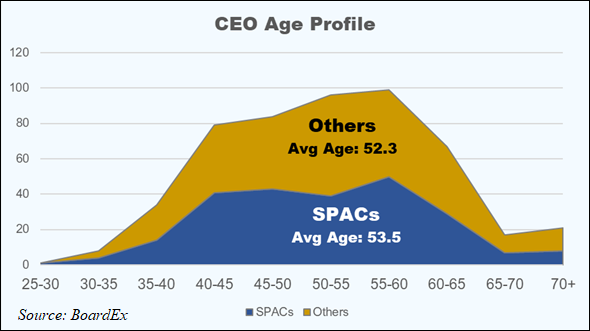 Almost all SPAC CEOs are founders of their companies—a stark difference from other IPOs in 2020, where over half of the CEOs were non-founders. 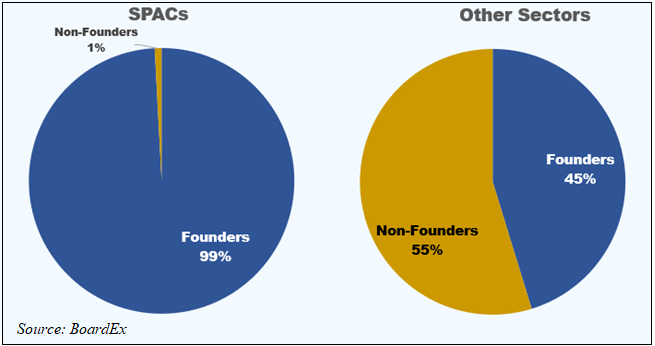 This is because most SPACs are recently formed entities. The SPACs that went public in 2020 featured CEOs that typically established themselves and their companies within 18-24 months before listing. Other IPOs had their CEOs in place for much longer, most often after someone else had founded each of their companies.

SPAC CEOs also tend to have previous CEO experience, whereas CEOs at other IPOs do not. In 2020, there were first-time CEOs at 144 or over half of non-SPAC IPO companies.

Instead, CEOs of non-SPACs often founded their companies at a younger age; they had worked in those companies for years before its IPO; or a combination of the two.

Experts in Their Fields – Practitioners in Finance Dominate

In fact, SPAC CEOs often operate like investors: they move on to the next transaction after their SPAC is listed. They may sit on the company board following its IPO; or, they may retire. On the other hand, non-SPAC CEOs tend to stay with their companies once they go public. They act as industry practitioners whose interests lie in perpetuating their companies’ operations and success.

SPAC CEOs Bring with Them Their Personal Brands

It’s no coincidence that SPAC CEOs are often experienced leaders who are recognized in their industries. This reputation contributes to the marketability of their SPACs. Many have well-entrenched networks that give them access to investors and other parties whom they need to involve to take their SPACs public. They are well-equipped to spot opportunities in the companies they acquire, and investors know this to be the case.

A Winner at the Helm

Consider this example: Bill Ackman is chairman and CEO of Pershing Square Tontine Holdings, which by February 2021 had the largest SPAC IPO to date. Ackman remains CEO of Pershing Square Capital Management, a hedge fund that has also pledged money to Ackman’s SPAC. Ackman’s other historic roles centered around investment management and chair or director roles at real estate equity, mortgage, and mutual fund investment companies.

In lieu of specifics on what companies Pershing Square Tontine Holdings plans to acquire, investors may be inclined to rally behind Ackman’s background and expertise. A SPAC with Ackman at the helm is likely a winner, one might think. His successful record and the power of his personal brand may outweigh the risk of investment in his SPAC—even though its real success is determined by what happens after its IPO.

“The King of SPACs”

At Social Capital Hedosophia Holdings, Chamath Palihapitiya “unites technologists, entrepreneurs, and technology-oriented investors around a shared vision of identifying and investing in innovative and agile technology companies,” according to the company’s website.

It’s Simple: Investing in a SPAC Is a Bet on Its Leadership

With any new SPAC—and unlike any other IPO—its founders, leaders, and the opportunities they perceive constitute its whole brand. If you buy into a SPAC, you are buying into its leaders’ vision; you are betting on those individuals to succeed. It’s only by understanding the background and expertise of its founders that one can make a realistic assessment of its true value and potential for success.

This blog post has been written by a third-party contributor and does not necessarily reflect the opinion of FactSet. The information in this report is not investment advice.

Mr. Alex Architektonidis is Assistant Director of Data at BoardEx, based in London. In this role, he is responsible for the operations of the BoardEx data team, focusing particularly on data technology initiatives and leading data analytics and visualization while collaborating with marketing and external clients. Mr. Architektonidis earned an undergraduate degree in business and a master’s degree in finance from the University of Westminster.