I cannot believe that we are already into March 2019! It’s true what they say though, time flies in a volatile market. Aside from a brief year-end prognostication, it has been nearly six months since I put pen to paper. Of course, I’ve been busy opining on all things fixed income attribution, repatriating to the U.S. (London, I miss you dearly; but now “Greetings from Austin y’all!”), and exploring the ins and outs of liability driven investing.

I have also been thinking about topics to spark a creative fire. One can only write about the intersection of fiscal and monetary policy or the deterioration of corporate issuers for so long without needing to shake it up a bit. So I did what any writer would do: scavenged my notes for predictions, predilections, and perspectives that could generate somewhere around 1200 words and some interesting visuals. Good news? I found several topics that fit the bill. The first of these revolves around how emerging market corporate debt fits into a broader multi-asset class portfolio.

The attractiveness of EM corporate debt, both hard and local currency, is a topic I’ve touched on frequently over the years. From a relative value perspective, the yield pickup during years of ZIRP and QE in the U.S. and eurozone markets was hard to ignore. Similarly, underwriting political risk against headwinds seen in developed markets (insert your headline risk du jour here) painted a relatively rosy outlook. My takeaway was that worst case, EM corporate debt was a diversification play.

But is it? Like nearly every asset class (with Treasuries the exception), 2018 was a down year for hard and local currency EM corporates. As we can see in Figure 1, hard currency corporates managed to outperform their U.S. and Sterling counterparts while euro corporates eked out a small gain from a USD-hedged perspective. Meanwhile, local currency bonds were decimated by a strong dollar that took no prisoners over the year. 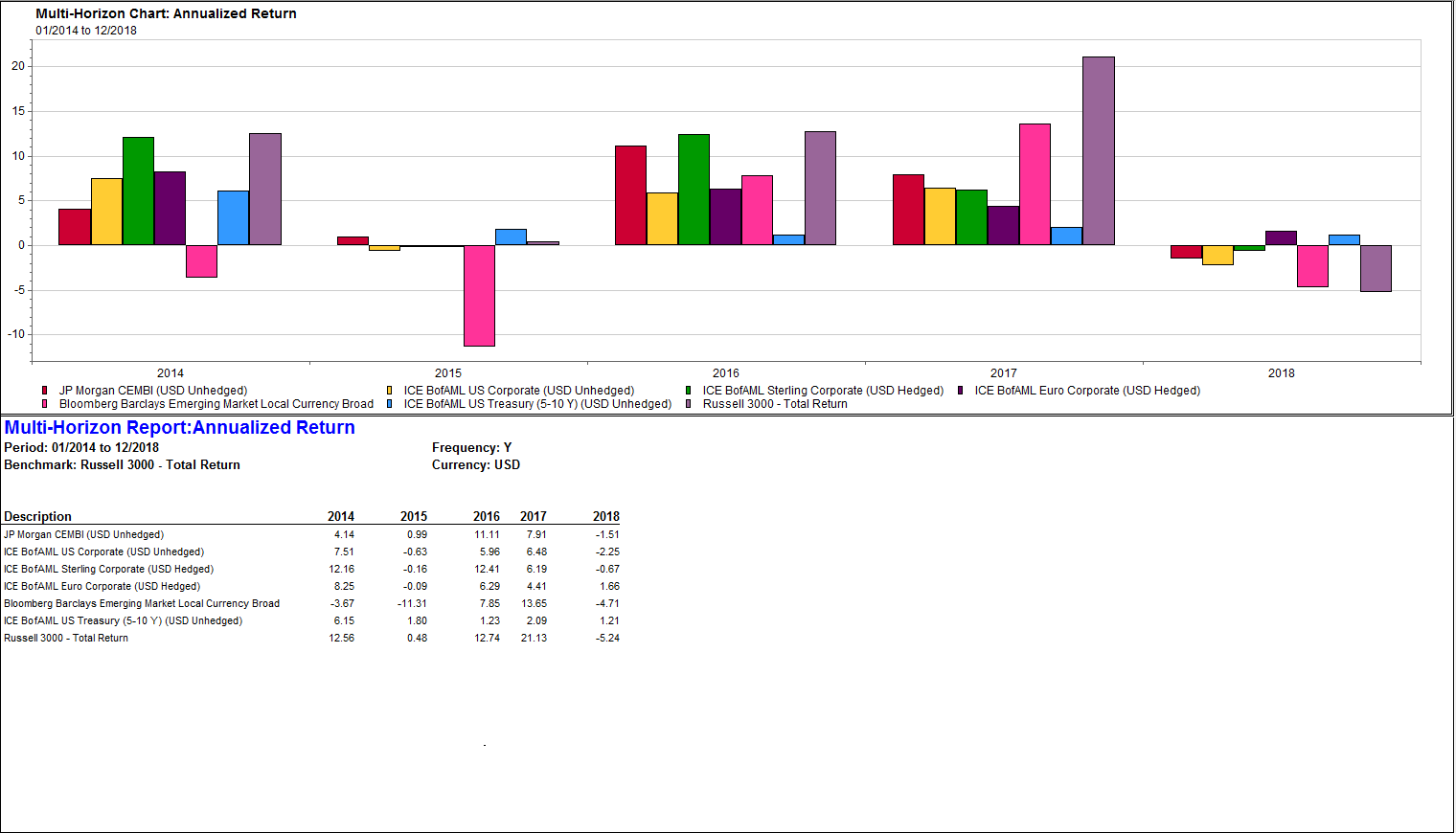 However, a return series alone doesn’t tell the full story. Looking at the correlation of monthly returns over a five-year period provides a bit of additional required detail. From Figure 2, we can parse out a few observations. First, a little surprisingly, we can observe that U.S. corporate debt has a very low positive correlation (.14) with the broad U.S. equity market. Personally, I would have expected this number to be higher. The correlation of U.S. corporates with Treasuries is expectedly high (.74), given that government term structure is an integral component of pricing corporate debt. Second, even more eye-opening, we see that EM corporates as defined by the JP Morgan CEMBI, are relatively highly correlated with U.S. corporate debt (.62) and are slightly less positively correlated with the broad U.S. equity market (.44). It is not surprising to see the diversification benefit of EM corporates relative to US Treasuries (positive correlation of just .20).

There appears to be some diversification benefit to be gained from holding EM corporate debt, but does that alone make the asset type appealing? Let’s look at country spreads and relative value, term structure compared to U.S. corporates, and the international exposure of the broader U.S. equity market for a greater understanding of how EM corporate debt can help complete the puzzle.

There are two relative value measures I would consider when comparing country groupings in the JP Morgan CEMBI. The first is to take some sort of time series measurement (five years of month-end OAS levels in this case) and compare the most recent spread to that country’s long run average. The second is to compare the month-end spread to the spread of overall index. From here, the same exercise can be repeated at a security level.

Each of these measures allows for a rich/cheap analysis.  Rich analysis considers a country’s current valuation relative to itself while in cheap analysis compares a country’s current valuation to all others present in the index. Of course, countries and credits may be cheap or rich for a variety of reasons, so it’s irresponsible to look at this in isolation.

From here we would underwrite each country in terms of endogenous factors like the macroeconomic environment, political risk or stability, and demographics. Sectors and individual issuers would follow a practical credit analysis.

Figure 3 provides several interesting takeaways. First, in terms of EM corporates, little is attractive when credit is first considered from the country perspective. Brazil, Russia, and South Africa all look rich relative to their historical valuations. Mexico, Turkey, and Argentina all appear to be undervalued, although potentially for good reasons. China also appears to be cheap relative to its historical spread levels, however it appears rich relative to the current index spread. I’ve made my own thoughts on the China onshore market known, but depending on the credit and your risk tolerance, there appears to be some upside relative to historical spread levels.. 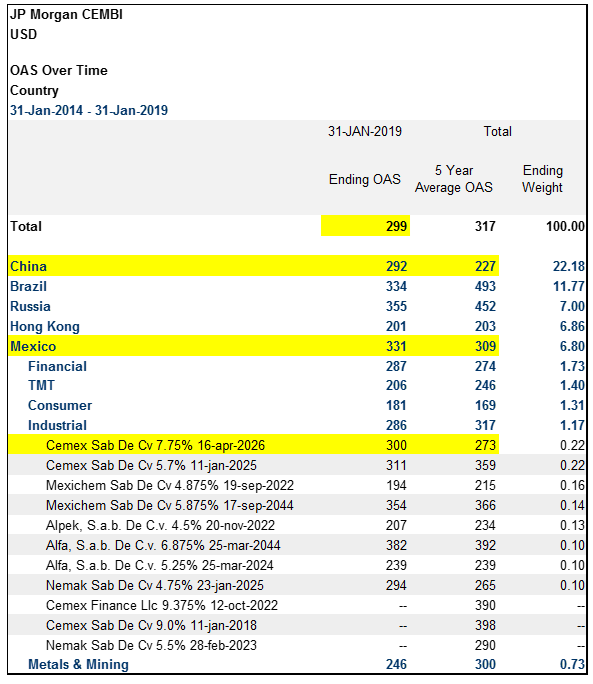 From a relative value perspective, EM corporates are a mixed bag today, regardless of the diversification impact.

It is also important to understand our exposure across the yield curve to understand if the structure of the market could impact outcomes in varying market environments. What Figure 4 clearly shows is that US corporates have greater interest rate risk relative to EM corporates (the ICE BAML US Corporate index effective duration is 6.90 versus 4.51 for the JP Morgan CEMBI).

Exposing the key rate durations, we can observe that the US index has far greater relative exposure to the long end of the yield curve while EM corporates tend to exhibit clustering around the belly of the curve.

Reviewing other summary characteristics also illustrates another appealing aspect of EM corporate debt: an additional 150 bps of yield. Combining the yield pickup with lower interest rate sensitivity lends credence to the attractiveness of the asset class. 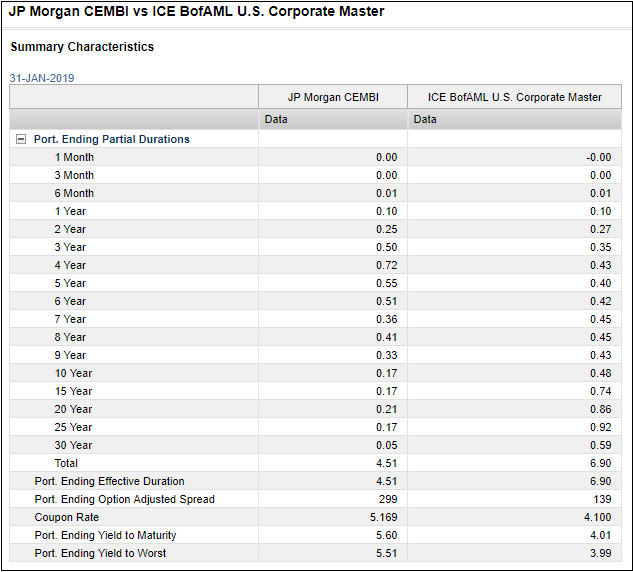 The final angle that I’ll review pivots from a quantitative approach to a qualitative approach. On it’s face, the question “do EM corporates provide a geographic diversification play relative to developed markets?” seems easy to answer in the affirmative.

To investigate further, I applied FactSet’s GeoRev dataset to the Russell 3000. GeoRev accounts for primary and secondary disclosures before applying a GDP-weighted algorithm to determine country, region, or economic exposure regardless of company domicile. 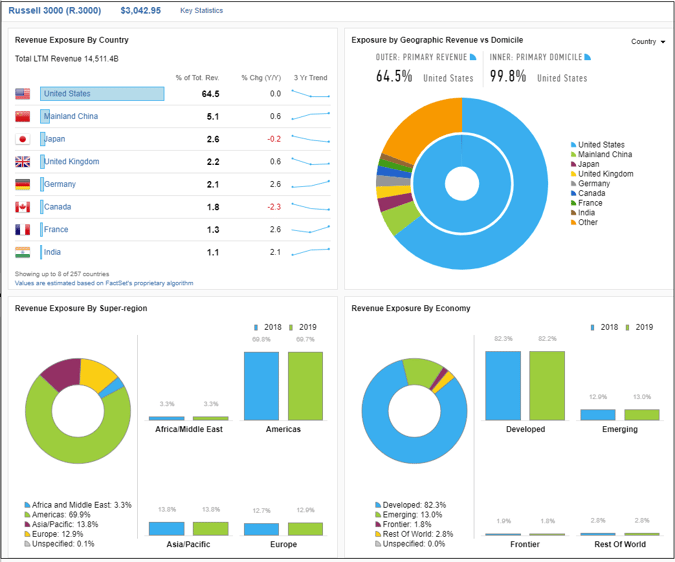 Having taken historical returns, valuation, term structure, and geographic exposure into account, what can we conclude about the attractiveness of emerging market corporate debt? As an asset class, it tends to have some value as a diversification play providing greater income generating potential with less interest rate risk. The flip side of that argument is that when importing yield, you may also be importing unattractive issues or issuers from a valuation or geopolitical exposure perspective.

There are certainly appealing characteristics of EM corporate debt, however each use case needs to view the asset class in the context of their risk tolerance; buyer beware.

Mr. Pat Reilly is Senior Vice President, Senior Director of FactSet’s Analytics solutions for the Americas. In this role, he focuses on providing content, analytics, and attribution solutions to clients across equities, fixed income, and multi-asset class strategies. Prior to this role, Mr. Reilly headed the Fixed Income Analytics team in EMEA and began his career at FactSet managing the Analytics sales for the Western United States and Canada. Before joining FactSet, he was a Credit Manager at Wells Fargo and an Insurance Services Analyst at Pacific Life. Mr. Reilly earned a degree in Finance from the University of Arizona and an MBA from the University of Southern California and is a CFA charterholder.