Convertible bonds (CB) offer high octane returns from the embedded optionality in the security, also known as leverage. To see this, just plot the S&P 500 index against a CB index benchmark; when you plot the Bloomberg Barclays Convertible Bond Securities ETF (CWB-US), the upside of a long CB position becomes apparent. In a rising market, the CB gains are a multiple of the stock price. Very simply, that’s the CB conversion ratio at work. As the stock price increases, the option moves deeper into the money and the conversion ratio increases, thereby adding multiples of the share price to the value of the bond. 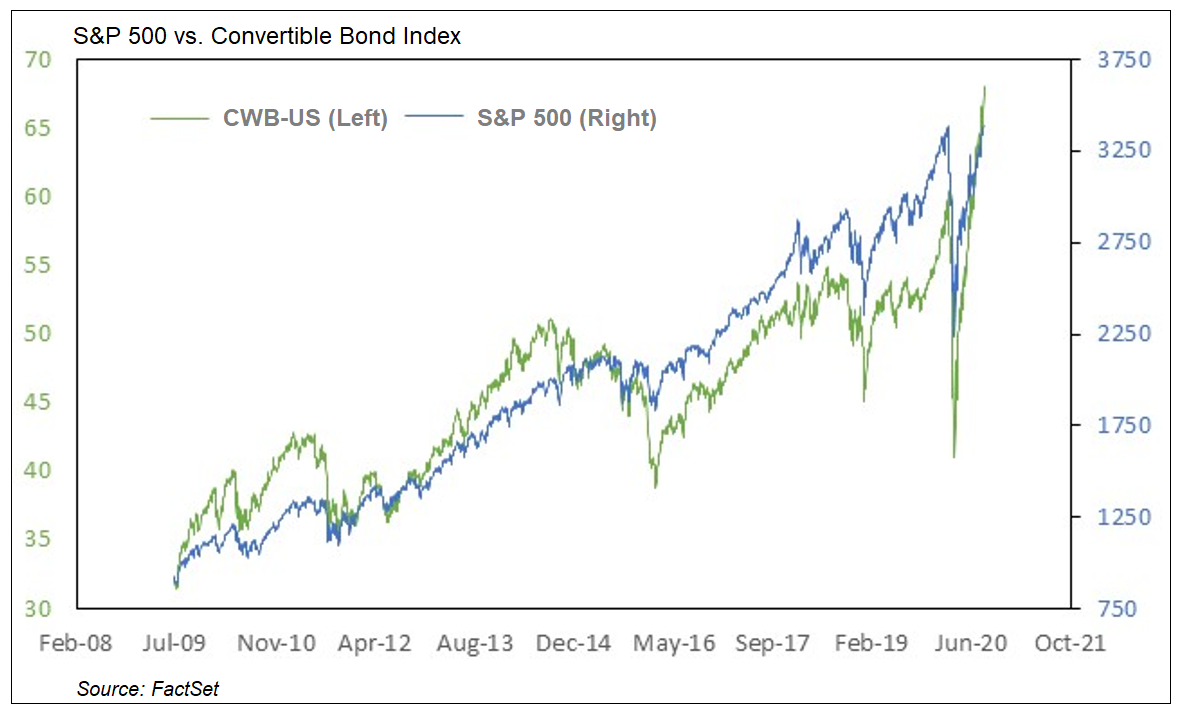 What is less publicized, and consequently less well understood, are the drawdowns. Since July 2009, there have been four retracements that have unwound the price gains made. The first occurred in October 2011. In February 2016 and December 2018, the losses translated to an underperformance of the S&P 500. Furthermore, CWB-US progressively declined in 2015 even while the S&P 500 was still increasing. From the CB highs in 2014, the S&P 500 only lost 7%, whereas CWB-US lost 24% by February 2016. In March 2020, both indices retraced by 34%. There is a volatility component to the valuation. But what else are we missing? The answer is counterparty credit exposure. CBs, like any corporate bond, are subject to credit spread risk.

Arguably, convertible bond issuers are high-yield credits. The benchmark index for that risk in North America is the CDS index, CDX.NA.HY. Every six months the index rolls to a new on-the-run series of the 100 most liquid high yield CDS domiciled in the United States and Canada. The current series is 33, i.e., more than 15 years of trading. Now, concentrating on the last three major drawdowns, plot CWB-US against CDX.NA.HY, created by “gluing” the on-the-run CDS data together every six months. The immediate takeaway is that the excess losses on the CBs coincide with credit spread widening. Likewise, as the CDS retraces, the CB valuation recovers. As a rule of thumb, when spreads widen, bond prices drop, and vice versa. The CDS spread widening began in March 2015. This also explains the weakness in CWB-US, despite a rising stock market in 2015. Hence, the excess losses incurred in 2016 and 2018 were credit induced.

Credit spreads and stock prices are closely linked. Plotted below are stock price versus five-year CDS for (a) Tesla Inc, (b) Casino Guichard-Perrachon SA, (c) Whiting Petroleum Corp., and (d) Bayerische Motoren Werke AG. As market capitalization rises, the CDS tightens. Lower share prices lead to higher CDS spreads. This produces a hockey-stick-shaped scatter plot. The degree of curvature varies. For example, the relationship is less clear cut for BMW—mostly because the equity trading range has never equated to significantly weakened credit quality. At the other end of the spectrum is Whiting Petroleum, which has seen heightened focus on the CDS as the stock price declined. In summary, falling stock prices translate to wider credit spreads which will accelerate losses for convertible bonds. 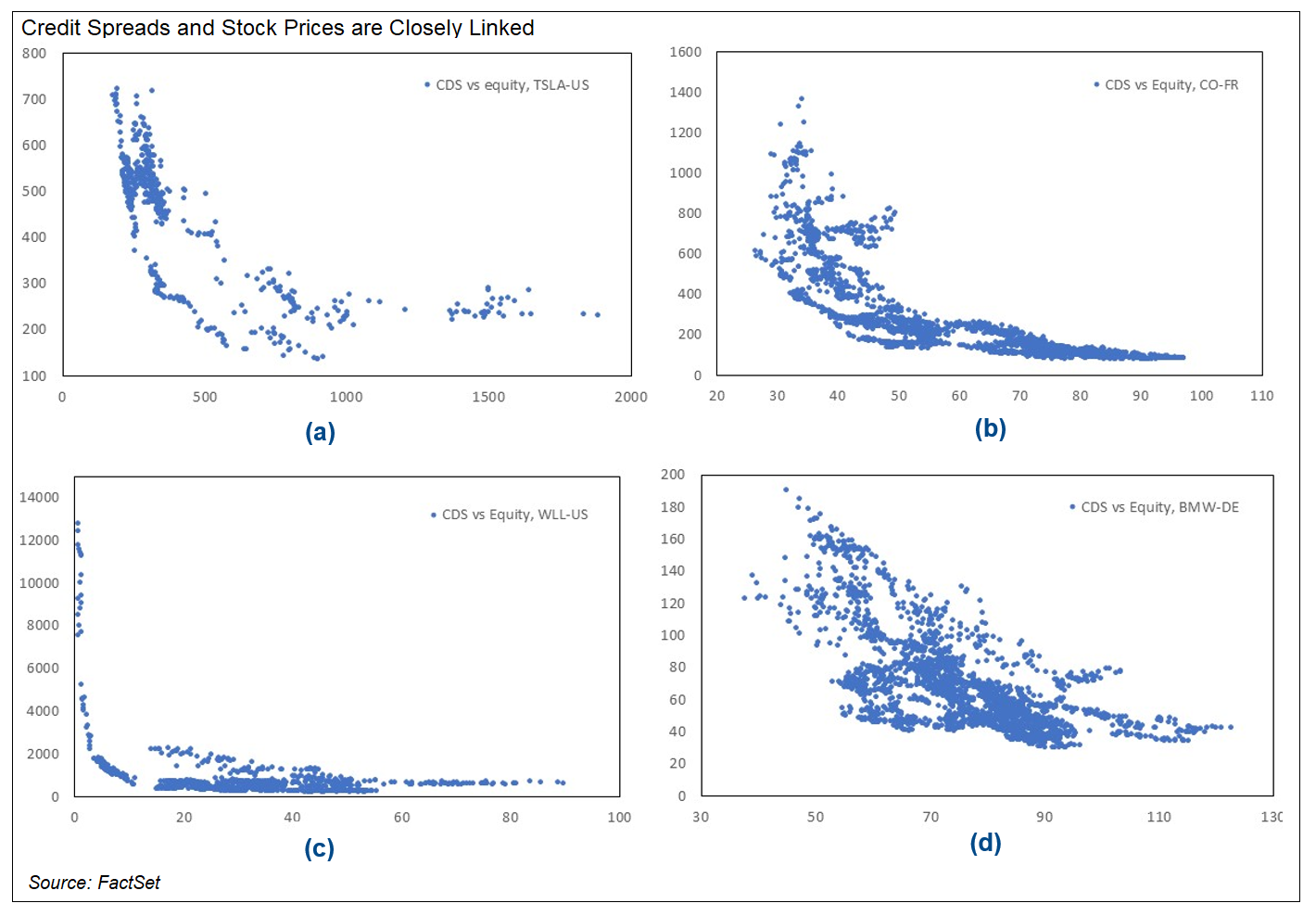 But does any of this actually matter? When the stock price recovers, the credit spread retraces and the CB price recovers. Right? That is certainly true, although from the first chart, the earlier CB gains never fully return following a major drawdown. But what if the stock price does not recover? It may continue to drop. The next charts show the bond price performance versus the equity for six CBs, where the issuer ultimately defaulted. They are: (a) Bellatrix Exploration 6.75% 2021; (b) Great Western Minerals 8% 2017; (c) Cobalt International Energy 3.125% 2024; (d) Powerwave Technologies 3.875% 2027; (e) Kaisa Group 8% 2015; and (f) James River Coal 4.5% 2015.

At their most severe, stock losses translate to outsized CB losses up to the point of the full bond notional. CBs display negative convexity. As the stock price declines sufficiently, the drop in the bond price accelerates. This is also known as negative gamma. An option trader might say that the CB has the profile of a sold put—also a negative gamma position. Even if a portfolio manager delta hedges the equity exposure, the bond price decline will accelerate beyond that, thereby leaving the fund under-hedged. This results in losses despite risk management. In 2008, the S&P 500 declined by 33%. According to Barclays Capital, market neutral CB hedge funds (i.e., those that do hedge) lost 34%. Understanding the negative gamma is crucial.

The upside returns from CBs demonstrably outperform pure stock holdings. The downside risk should be the focus. Once you look at the credit risk, there are three key takeaways:

If you take rising stock markets as a given, the upside potential of convertible bonds is clear. The outperformance will naturally accrue as the market increases. Caging those gains is a challenge. Does that then mean that the difficulty of investing in these securities lies in the credit risk? Is it the case that a CB fund is in fact trading the credit and not the equity? 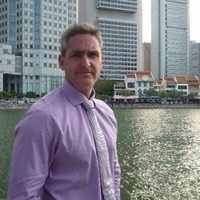 Mr. Peter Zeitsch is Senior Quantitative Researcher, Analytics & Trading Solutions at FactSet. In this role, he specializes in structured and hybrid derivatives within fixed income. Prior, he has held positions as both a quantitative analyst and trader across three continents. His current research interests center on applying machine learning to financial time series to identify price dislocations and market inefficiencies. Mr. Zeitsch earned a Ph.D. in Mathematics from the University of Sydney.

While our analysis shows that greater leverage has been correlated with higher levels of risk over the last 20 years, European...

The Future of Risk Technology

Looking Back at Market Environment Factor Research in 2020

In rapidly changing markets, leveraging any static factor strategy throughout is unlikely to perform well. A strategy must adapt...

FactSet has partnered with the CFA Institute and ACA Performance Services to answer questions from the global financial community...