The Future of Chinese IPOs

The planned IPO of Ant Group on the Hong Kong and Shanghai stock exchanges this week was highly anticipated and would have been the largest IPO in history. While the offering was suspended less than two days before its IPO date, it still signals an important potential shift to Asian markets—especially given that Chinese companies have dominated foreign IPO listings in the U.S. over the last three years.

We recently published an article looking at the surge in U.S. initial public offerings (IPOs) in the third quarter. As of early October, the U.S. was on track to have a record-setting year in terms of IPO activity.

The continued strong representation of Chinese companies on U.S. markets may appear to be counter-intuitive considering the seemingly challenging environment for Chinese companies operating in the U.S. However, when we take a deeper look at the data, the picture is more complex than it perhaps appears at first.

After their U.S. IPOs, some well-known Chinese companies have opted to have secondary listings in Hong Kong or Shanghai. The biggest example, and still the only one that has exceeded $10 billion in gross proceeds, was Alibaba Group’s secondary listing of $12.9 billion on the HKSE in November 2019. Alibaba also happens to be the majority owner of Ant Group.

Following in Alibaba’s footsteps, two Chinese companies raised almost $7.6 billion this June via secondary listings in Hong Kong: JD.com (priced June 11, 2020, raised $4,459 million) and NetEase (priced June 7, 2020, raised $3,130 million). Those two deals contributed over 10% to the total gross proceeds of $73.5 billion raised as of early October by 308 Chinese companies' IPOs on the HKEX, SHEX, and SZEX exchanges. That total is about nine times the $8.9 billion raised by the 29 Chinese companies that IPO’d on U.S. exchanges during the first nine months of 2020. This figure does not include the London Stock Exchange, which saw two additional IPOs, China Pacific Insurance and China Yangtze Power, with total gross proceeds of $3.9 billion. 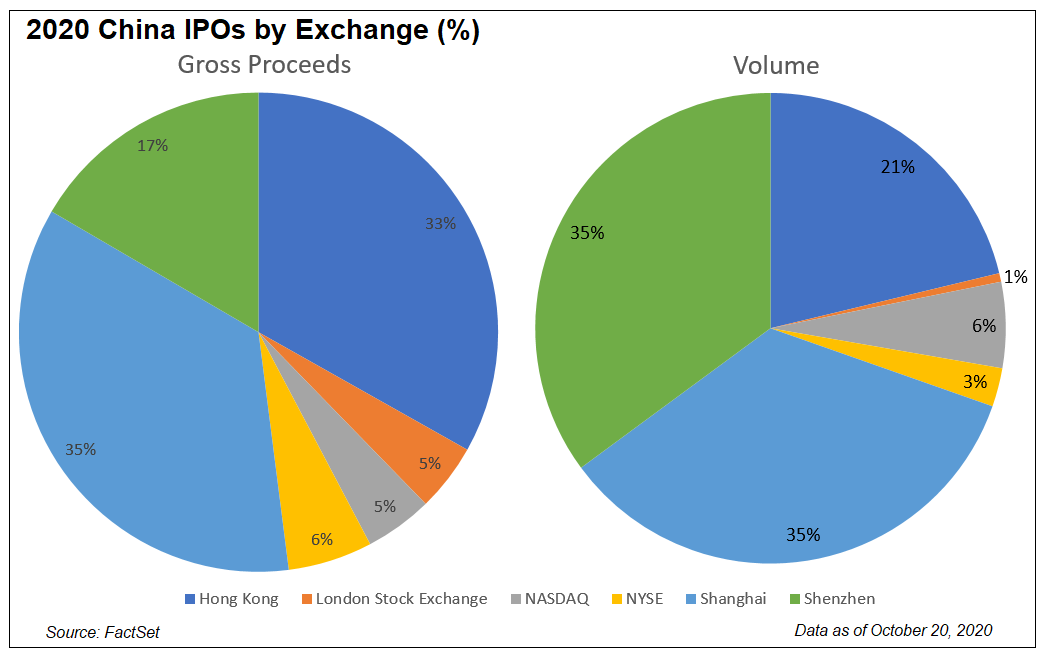 The global view, illustrated in the chart above, shows that Asian exchanges (including Hong Kong, Shanghai, and Shenzhen) have had the lion’s share of Chinese IPOs, whether measured using capital raised (85%) or number of companies (91%). That indicates that even though the U.S. IPO market will likely set a record this year, the combined Asian exchanges will witness an even bigger increase due to the number and size of Chinese companies choosing to IPO in those markets. Compared to historical trends, the surge has come mainly from the mainland Shanghai and Shenzhen exchanges, while Hong Kong is still about $6 billion below its 2018 figure. 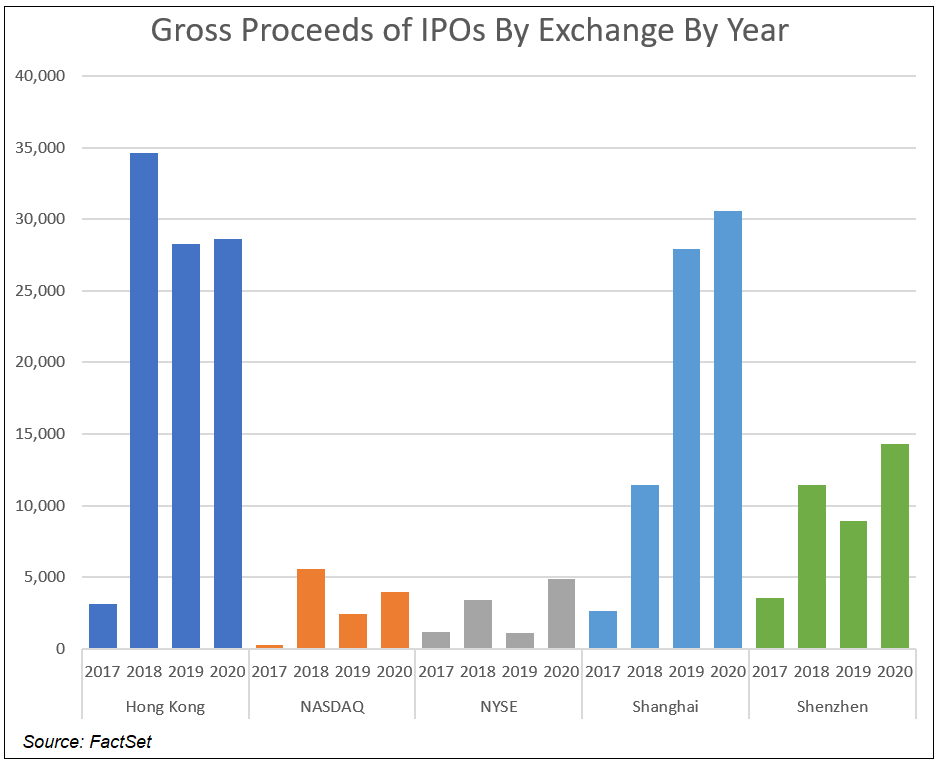 One example of a company choosing to IPO in the Chinese mainland markets vs. Hong Kong is WeDoctor, backed by another Chinese behemoth, Tencent. WeDoctor scrapped its plan to IPO in Hong Kong this year and is now looking to a later listing in Shanghai according to a recent Financial Times article.

However, others are still opting for overseas listings. The most recent one is Lufax, an online lender backed by Ping An Insurance Group, which IPO’d in the U.S. on October 30 and raised $2.36 billion, surpassing the previous largest Chinese IPO this year, Ke Holdings, by $240 million. Ping An Insurance Group has already had two subsidiaries successfully IPO in the last two years: Ping An Healthcare & Technology debuted on the HKSX in May 2018, raising $1,118 million; and OneConnect, with an IPO on the NASDAQ in December 2019 that raised $347.2 million. OneConnect followed its NASDAQ IPO eight months later with a secondary offering on the NYSE that raised $372.6 million.

One reason that Chinese companies still want to list in the U.S. is that the cost of capital is significantly lower in the U.S. than that of China and other countries, which carries a larger country risk relative to the U.S. In addition, the U.S. is still the easiest market in which to raise capital.

The Finance Sector led U.S. IPOs in the third quarter due to the surge in Special Purpose Acquisition Corps (SPACs). However, technology-related sectors dominate for Chinese IPOs. Finance took the third spot, including three SPACs on the NASDAQ and one on the NYSE. The top four sectors by aggregated gross proceeds broken down by exchange are shown in the table below.

So far in 2020, IPO activity in the U.S. has far surpassed anything we have seen since the global financial crisis with help from some Chinese companies. However, when looking at Chinese companies’ IPOs in aggregate, the size and trend by far are favoring mainland and Hong Kong exchanges.

At the recently concluded Fifth Plenary Session of the 19th Central Committee of the Communist Party of China, the committee outlined its 14th five-year plan, covering 2021 to 2025. The plan emphasizes the promotion of “dual circulations”: domestic consumption and cross-border capital flows. During the same session, the committee also highlighted quality over growth. The postponement of Ant Group's IPO at the request of Chinese regulators within days after the conclusion of the plenary session showed a level of caution and may signal how fintech companies like Ant Group will be defined and regulated going forward.

Given this new five-year plan and the results of this week’s U.S. presidential election (still pending as of time of publication), it will be interesting to see how the future of Chinese IPO listings plays out.

Note: All statistics are based on FactSet data for IPOs priced during the specified period for companies going public on global exchanges.