The growing interest in environmental, social, and governance (ESG) investment is likely to propel more companies to pursue a “greener” approach to their operations to attract investors. However, investors will need reliable information sources to get a clear picture of the true sustainability efforts performed by a company.

In fact, as there is little verification of what businesses report with regards to their environmental performance, there are often instances of greenwashing, or the process of conveying a false impression, or providing misleading information about how a company's products are more environmentally sound.

TenderAlpha’s Green Public Procurement Contracts Data Feed, available on the Open:FactSet Marketplace, can be a useful tool in tackling the greenwashing issue as it exclusively uses publicly available official government data. In other words, the data is not self-reported by the companies that have been awarded government contracts. Using a proprietary, discretionary methodology developed by TenderAlpha, contracts are given a “green” contract designation. Contracts are categorized and scored based on the level of actual sustainability effect of the works/services performed under the contract and the potential impact of the contract performance.

Here we describe the data used in this analysis and present the preliminary results.

What is Green Public Procurement?

Green public procurement is a process whereby public authorities procure goods, services, and works with a reduced environmental impact throughout their lifecycle. Green tenders represent the award of works/services based on green tender specifications in addition to traditional supplier selection criteria such as price and technical requirement.

What Counts as a Green Contract?

TenderAlpha has created a discretionary methodology for detecting, categorizing, and rating green public contracts. Contracts are detected based on a three-pillar flagging methodology that “captures” the award of green contracts in real time:

While this simple test for differences in average returns serves as promising preliminary evidence, the observed difference in stock responses could be driven by other characteristics that systematically differ between stocks that win green contracts and those that win non-green contracts.

To this end, the research team estimated ordinary least squares (OLS) regressions that use the stocks’ returns around the contract awards on a green contract dummy (D) and various controls, including idiosyncratic volatility, size, book-to-market ratio, momentum, leverage, industry competition, and financial constraints, among others. The sample spanned the period 2009 to 2019 and included 1,588 unique firms with 396,534 firm-day (events) observations.

Tables 2 and 3 below show the preliminary results. The conclusion here is consistent with what we found above. Green contract awards to firms are associated with economically and statistically significantly higher stock returns around their announcements relative to non-green contract awards. Once again, the regression results are robust when using BHARs or other benchmark models for returns.

Table 4 shows the preliminary results. The data indicates that the differential response to green contract awards exists both for periods with high and low climate change risk. 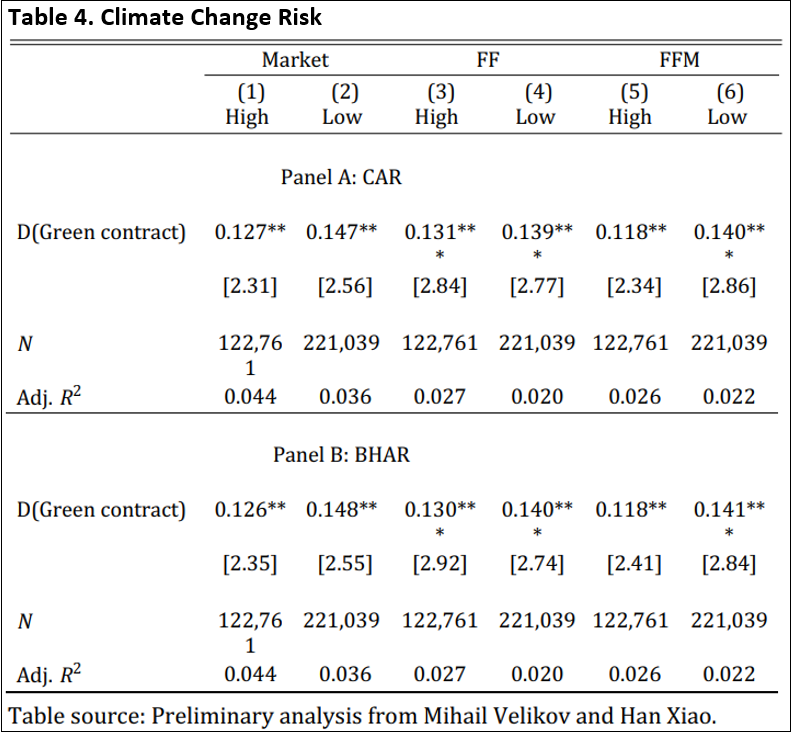 While the evidence from this study is still preliminary, it appears to show that green contract awards are associated with a significant positive market response. We believe that this investment signal will remain strong over time. As more “green” tenders are procured, it is reasonable to expect that the scope of companies will also widen. This will lead to more business opportunities for companies who want to participate in green government contracting and investors who will have a larger pool of potential investment options.

Mr. Martin Tsanov is the co-founder of BizPortal and a Product Director at TenderAlpha.com as the only global government procurement data product specifically designated for investment analysis. In this role, Mr. Tsanov is responsible for both product and business development with a special focus on quantitative and ESG research applications of the contract awards data which is also available through the Open:FactSet Marketplace. He has more than 10 years of professional experience combining exposure to investment and capital markets research with working in the public and think tank sectors in the U.S. and Europe. Mr. Tsanov earned an MSc in Political Economy from the London School of Economics and a BA in Political Science from Whittier College in Los Angeles, California.