The Intricacies of Financial and Legal Relationships in M&A

Everyone knows that relationships matter in M&A. Most commonly this is between the financial advisor and the client company, but looking at FactSet M&A data from a different angle, we can extract additional layers of relationship information that are worth a closer look.

It's common for deal participants to hire a financial and legal advisor, but in a few cases the financial advisor will also hire its own outside legal counsel on the deal, presumably to ensure it is giving correct advice as well as ensuring it has enough controls in place.

The Most Common (and Lucrative) Legal/Financial Partnerships

As a regular on the financial advisor league tables, it isn’t a surprise to see Goldman Sachs have strong relationships with other law firms also. What is a surprise though, is that Sullivan & Cromwell is only featured at the top in its relationship to Goldman Sachs; the firm is not present anywhere else in the top 20 Legal/Financial pairings.

Other law firms on the list appear multiple times, paired with multiple financial advisors. Interestingly, two other firms that Goldman uses only appear in the top 20 list for their relationship to Goldman; Fried, Frank, Harris, Shrive & Jacobson and Skadden, Arps, Slate, Meagher & Flom.

Of the top 20 legal advisors that are hired by financial advisors, based on deal volume, the two relationships that stand out the most are Sullivan & Cromwell/Goldman Sachs and Fried, Frank, Harris, Shriver & Jacobson/Goldman Sachs. This is mainly because the concentration ratios are so high – 67% and 62%, respectively. These law firms do the vast majority of their work with Goldman Sachs.

Sullivan & Cromwell’s next highest relationship is with Wells Fargo where it has worked on only 32 deals (5%). Fried, Frank, Harris, Shriver & Jacobson’s next highest relationship is with Bank of America Merrill Lynch where it has worked on 38 deals (14%). Of all 61 legal advisors that have worked on at least ten deals, only five have a higher concentration with a single financial advisor. 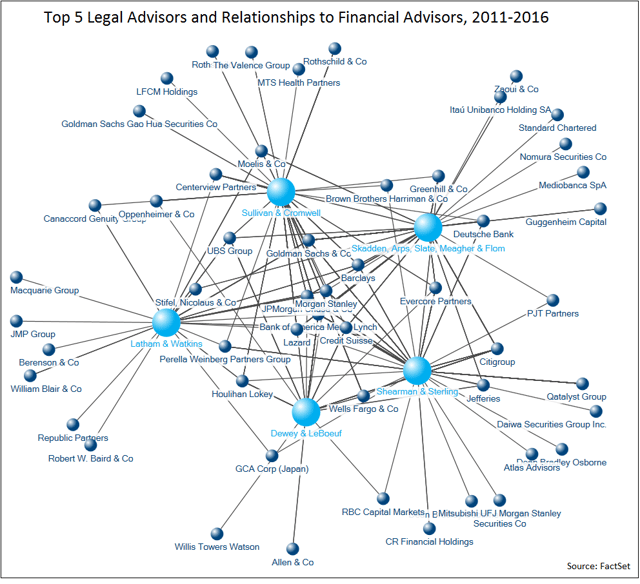 On the other hand, the top five financial advisors interact with 45 legal advisors. The relationships in place are clearly very solid.