What Valuations Say About Technology and the Broader Market

As the 2018 Q2 earnings season comes to a close, the tech giants have dominated this year’s headlines with impressive growth and returns (with the exception of Facebook). The Information Technology sector makes up 26% of the S&P 500 and continues to go up with no signs of slowing down. But exactly how much of the S&P 500’s all-time highs can be attributed to the technology sector and how much of this is justified by valuation metrics?
Year-to-Date Performance

As shown in the chart below, there has been a dramatic divergence between the performances of the S&P 500 and the technology sector this year. The S&P 500 has gained 7.08% year-to-date, while the tech sector has surged by an impressive 15.55%. The S&P 500 ex-tech is up just 4.14% for the year, putting it on pace for about a 6% gain by year end. 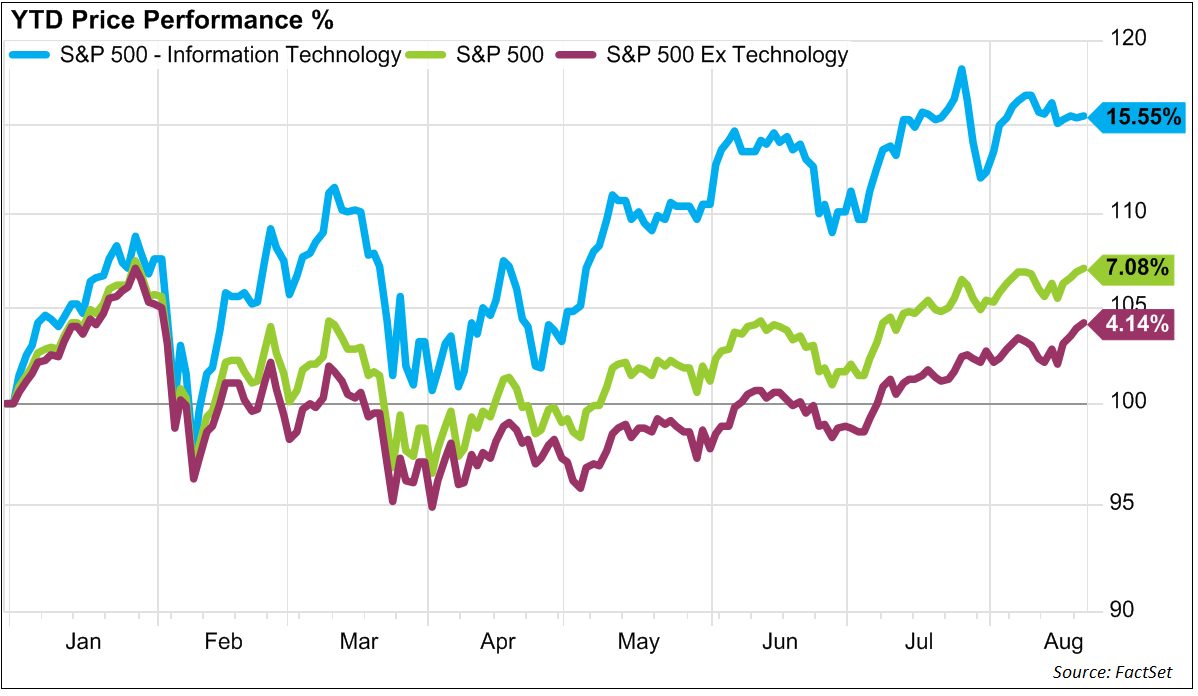 This divergence would be even greater if we included two mega-cap technology stocks that currently fall into the consumer discretionary sector, namely Amazon and Netflix, which have gained 63% and 79% for the year, respectively.

Is This Outperformance Justified?

To evaluate whether technology’s outperformance is justified, we took a longer-term approach and compared a few key valuation metrics (P/E, P/S and EV/EBITDA) to their historical averages for all three indices. We evaluated the data over a nine-year period to reflect the current bull market, which began in March 2009. 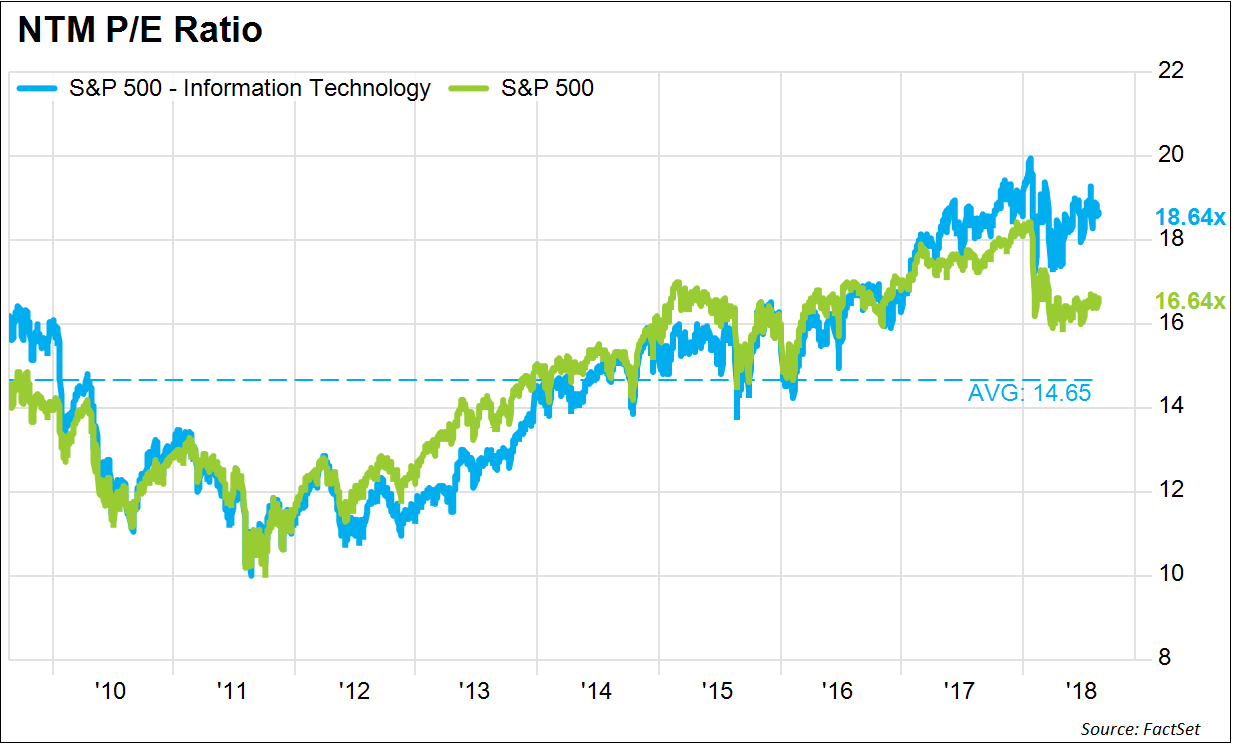 We see the same thing for the NTM EV/EBITDA and P/S multiples, with the S&P Information Technology index currently trading at spreads well above its historical averages. 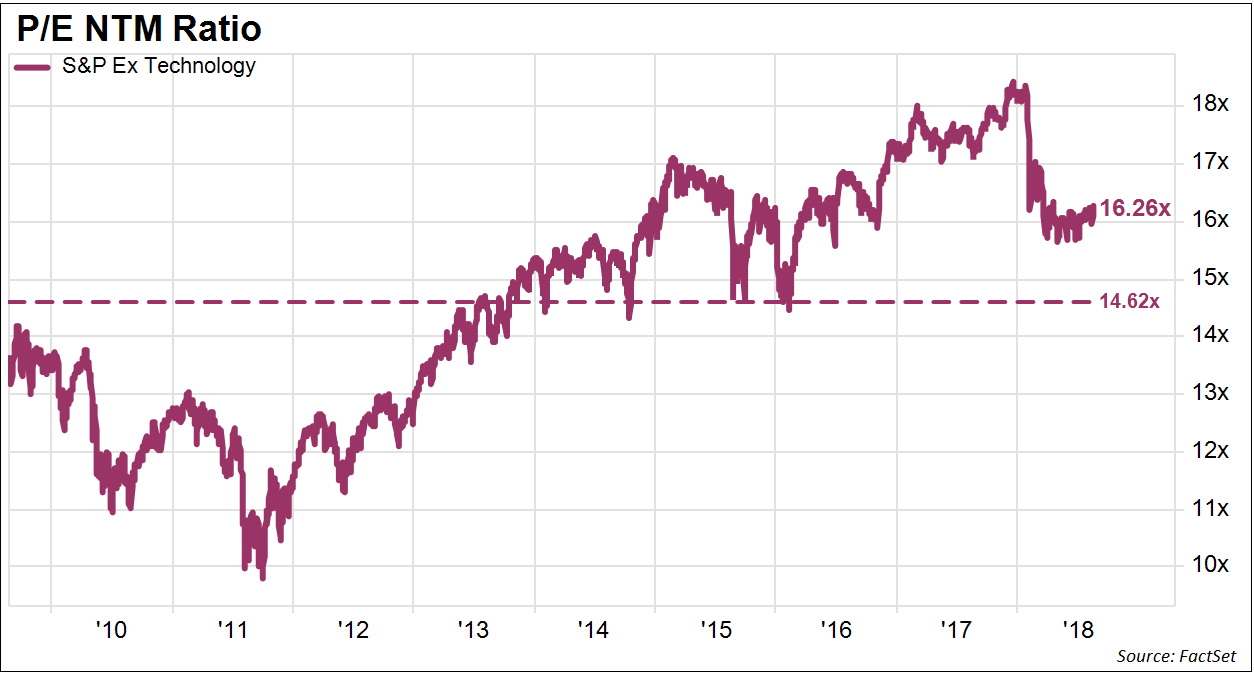 Similar to the other two indices, our custom index is trading at a premium over the historical averages for both P/S and EV/EBITDA, but the premiums are much smaller in magnitude.

The technology group is moving against the mean reversion of the remainder of the S&P. To determine the effect of the tech appreciation on the valuation and performance of the overall S&P 500, let’s take a step further and analyze the divergence of multiples between the S&P 500 and its Information Technology sector.

To see how multiples have trended over the last nine years, we analyzed the spread between these same three valuation metrics (P/E, P/S and EV/EBITDA). For each indicator, we used the multiple of the Information Technology sector minus the multiple of the S&P 500. Historically, the market has expected the tech sector to trade at a premium to the broader market, which has been justified by higher growth. We set out to identify trends in the disparities of these multiples. 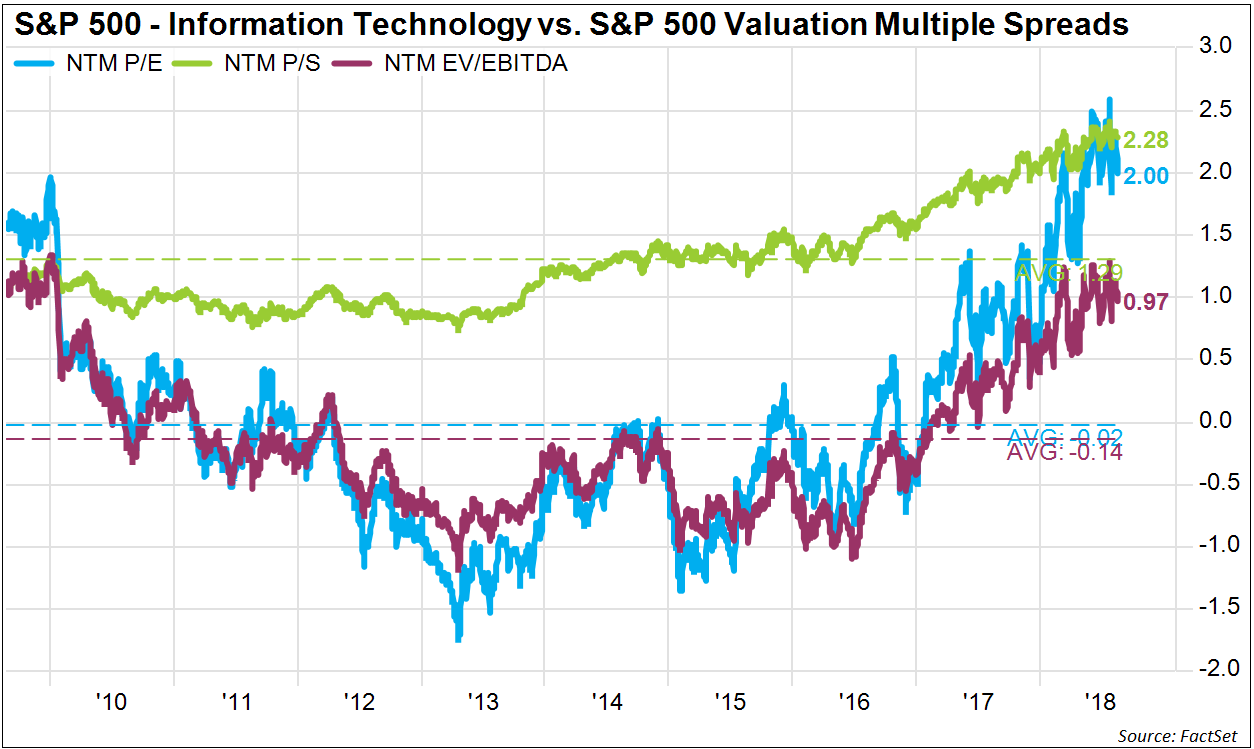 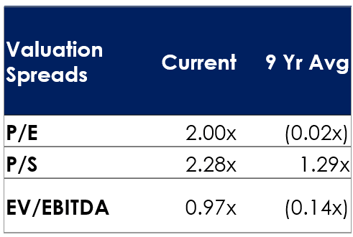 However, beginning in early 2017, the information technology sector began to diverge from the overall market average for all three valuation indicators. The most dramatic divergence occurs with the Price to Earnings ratio. For most of the nine-year period, the average P/E NTM of the S&P 500 stayed close to the average of the Information Technology sector (-0.02 spread); however, the current multiple spread sits at +2.0x, the highest it’s been since August 2008. Relative to the S&P 500, this valuation spread analysis is further evidence that the price appreciation of technology companies is not supported by growth in sales, EBITDA, or earnings.

What Does It All Mean?

As the S&P 500 continues to hover near its all-time high, this raises the question: is the market overvalued or is it the technology sector? If it’s just technology, this could foretell a rotation out of overvalued technology stocks and into more undervalued sectors. The fact that overall S&P 500 earnings have kept pace with stock prices can be largely attributed to the corporate tax cut that was passed in December 2017. This may only indirectly impact sales and EBITDA over the longer-term, hence the disparity between P/E, P/S and EV/EBITDA multiples. While P/E is simply one measure of valuation and may not be the driving factor in the markets right now, stocks tend to fall back on fundamentals when momentum stalls. 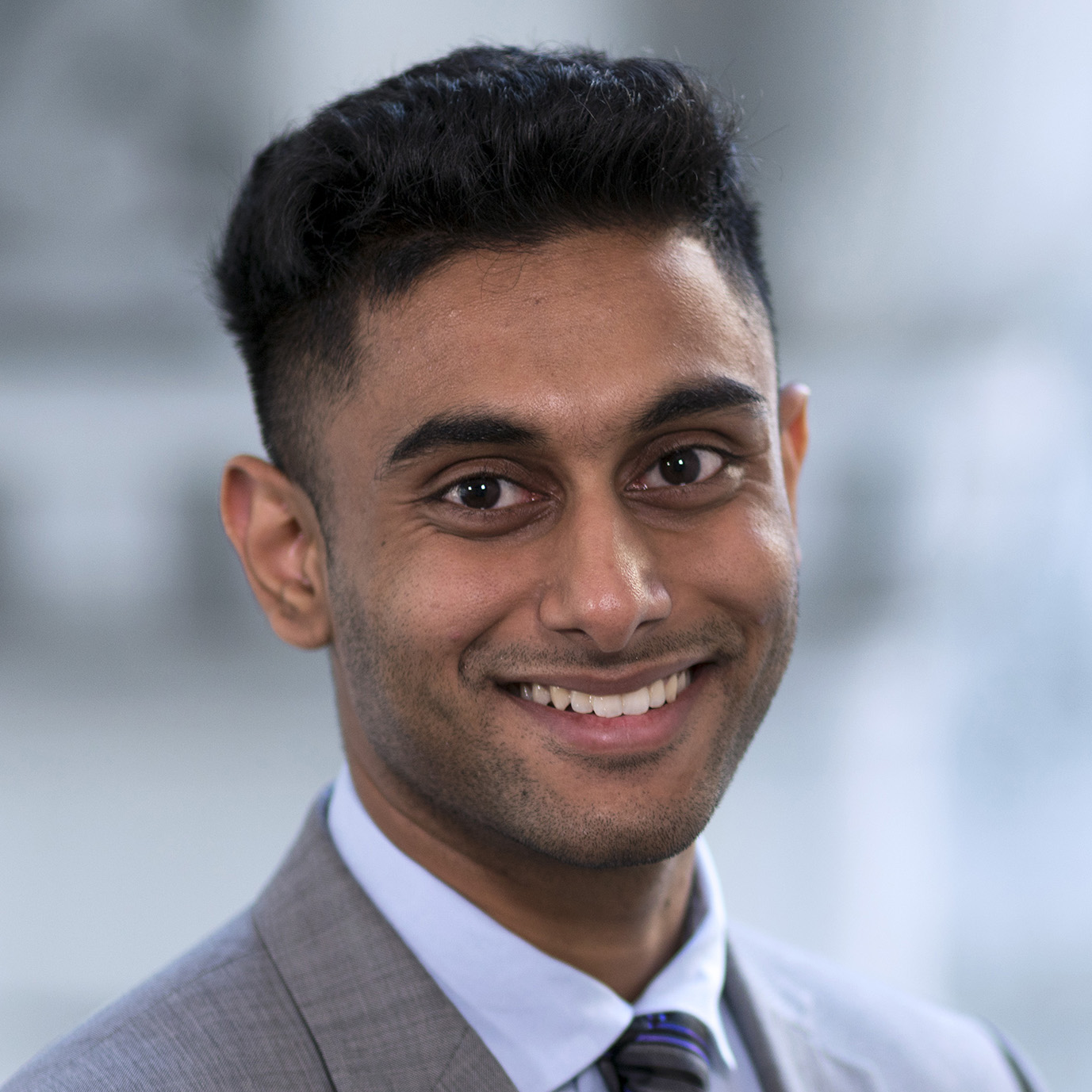 Arjun joined FactSet in 2016 and is based in Toronto.