The global economic outlook is dominated right now by the global spread of the COVID-19 novel coronavirus and the economic toll of country lockdowns instituted around the world to stem the spread of the virus. As economic forecasters struggle to quantify the impact of strict containment measures, we have seen drastic cuts to economic forecasts in recent weeks.

Updated daily, FactSet Economic Estimates provides a real-time picture of market sentiment on key economic indicators. Over just the last several weeks, FactSet’s economic estimate consensus numbers have fallen sharply as analysts’ outlooks have dimmed. Analysts surveyed by FactSet are now forecasting a 2.9% contraction in U.S. GDP in 2020; this compares to the 1.8% expansion predicted at the end of February.

The Eurozone economy is expected to shrink by 4.8% in 2020 while the UK is projected to see its economy contract by 4.9%. China’s GDP is expected to grow by just 2.2%, the country’s slowest GDP growth since official records began.

The International Monetary Fund (IMF) released its latest World Economic Outlook in early April with substantial changes to its global projections due to COVID-19. After expanding an estimated 2.9% in 2019, world GDP is expected to contract by 3.0% in 2020 and then rebound in 2021 with a 5.8% expansion. This forecast is significantly different from the IMF’s interim projections published in January.

The IMF is projecting large economic contractions in developed countries in 2020. The U.S. economy is projected to decline by 5.9%, the Eurozone by 7.5%, and the U.K. by 6.5%. At the same time, emerging countries such as China and India will grow, but at much lower growth rates than these nations have seen in recent years. China is expected to grow by just 1.2% compared to 6.1% in 2019, while India will grow by just 1.9% following a 4.2% expansion last year.

The IMF is predicting that the global economy will experience its worst recession since the Great Depression, much worse than what we saw 10 years ago with the global financial crisis.

Turning to the Organization for Economic Cooperation and Development (OECD), the OECD’s March Interim Economic Outlook projects that global GDP will grow by 2.4% in 2020 and 3.3% in 2021. It’s important to note that this forecast was published in early March, just over a month ago. The global economic picture has changed dramatically since then.

In the United States, GDP growth is expected to ease from 2.3% in 2019 to 1.9% in 2020 and 2.1% in 2021. We see similar slowdowns in other regions, primarily due to the impact on global supply chains, travel, and commodities due to the economic contraction in China. 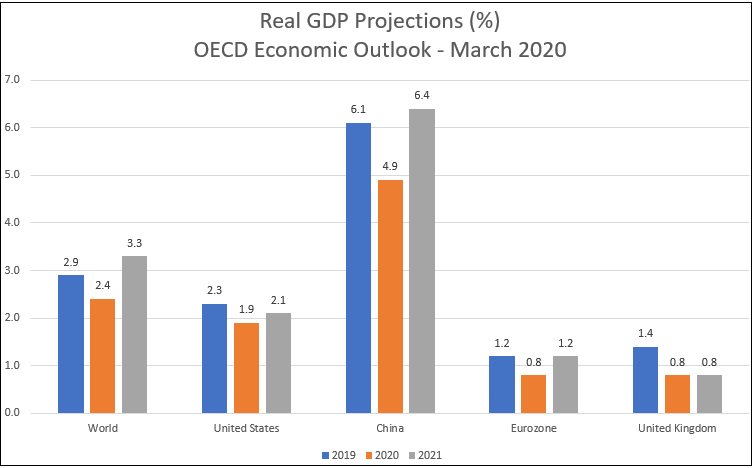 The OECD forecasts are significantly lower than those released in November of last year, but the March OECD forecast assumed that the coronavirus epidemic would peak in China in early 2020 and outbreaks in other countries would prove mild and contained. While the OECD has released some updates to account for the latest information on the global spread of COVID-19, the next Economic Outlook is not scheduled for release until June 10.

To see these forecasts in more detail, watch the latest economic forecast video.