The U.S. Housing Market: 10 Years after the Bubble

Ten years ago, the U.S. housing market bubble burst and the resulting credit market crisis pushed the U.S. economy into its worst recession since the Great Depression. Now that the U.S. has just begun its ninth year of economic expansion, what does the housing market look like today? Are there any signs that indicate the formation of a new housing bubble?

The monthly S&P CoreLogic Case-Shiller Home Price Index tracks single-family home prices in several major metropolitan areas. With its most recent release of data for June, all cities in the index showed year-over-year gains with Seattle (13.4%) and Portland (8.2%) leading the pack. Strong population and labor force growth are key to the large increases in home prices in these two cities. According to data from the U.S. Bureau of Labor Statistics, since January 2010, the labor force has grown by 15.8% in Seattle and 23.5% in Portland, compared to 4.8% growth nationally.

Looking at the indices for individual cities, two trends stand out. In cities like Atlanta, the recession brought a crash in market prices, followed by a full rebound to-date. On the other hand, prices in larger metropolitan areas like Dallas and Denver remained relatively stable during the recession, but have skyrocketed throughout the recovery. If we assume a housing bubble, will cities like Dallas experience the same “downside capture” as places like Atlanta? Or will they weather the storm with the same fortitude they saw in the past? These trends could indicate regional “bubbles,” but evidence seems to suggest larger, long-term demographic shifts at work. 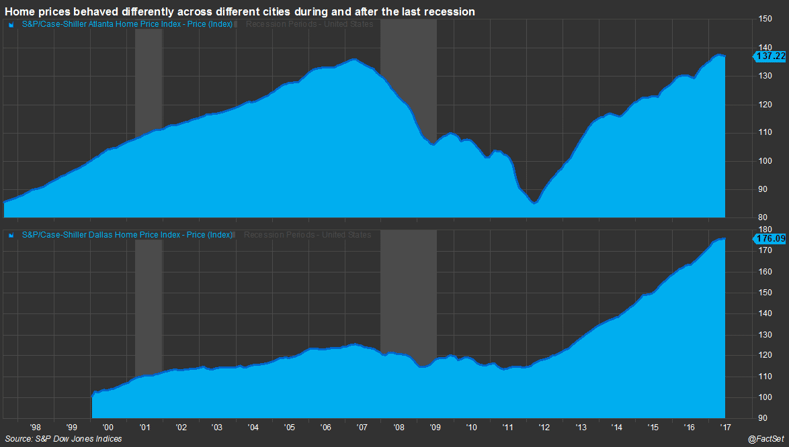 Though bubbles pop unexpectedly, market sentiment may provide some insight into the future. For the companies in FactSet’s U.S. homebuilding industry index, estimate revisions for sales over the last three months show that upward revisions outweigh downward revisions (80 vs. 36). Additionally, if we look at the sales revision data during the period leading up to the last recession, we can get an idea of how the market “should” be reacting to an impending bubble.

During the six-month period leading up to the recession, analysts transitioned from a state of (for lack of a better term) general confusion, to one of overwhelming negativity regarding the future of the homebuilding industry. The current revision data shows a more positive outlook, indicating that the market is confident—for the time being—that the bull market will continue, at least where it concerns housing.

Across the board, estimates for the homebuilding industry seem upbeat, with double-digit growth numbers projected over the next two years for EPS and EBITDA. However, there is an obvious downward trend in the growth numbers as we continue to climb out of the pits of the housing crisis. It will be interesting to see how that trend continues, as sales growth is projected to decline from 23% in 2016 to 6.3% in 2018. What is a “sustainable” rate of growth for the housing market?

In a similar vein, while analysts surveyed by FactSet expect continued growth in housing starts through 2019, the growth rate will continue to slow. Current projections indicate that by 2019 housing starts will reach 1.34 million units, matching 2007’s level, registered as the market was still collapsing. 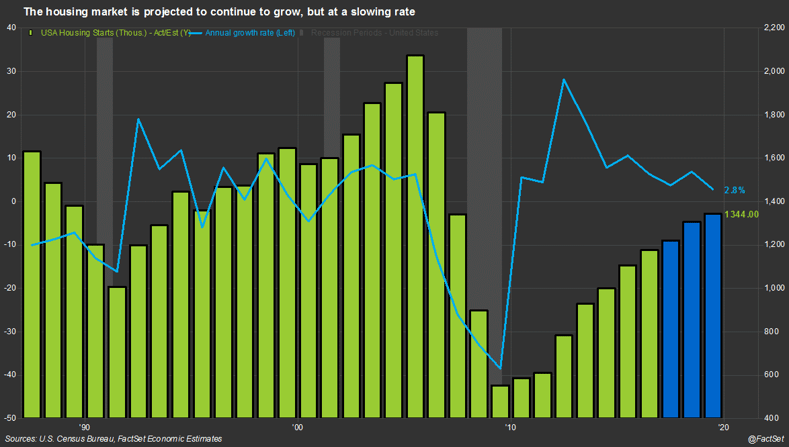 As we emerged from the last recession, consumers returned to the existing home market more quickly than to the new home market. On one hand, this could have reflected a more tempered, frugal approach to the housing market, with current homebuyers content to settle for less than their dream home to avoid overextending themselves. On the other hand, it may have been the result of lingering skepticism about the value of a home as an investment, perhaps the result of a generation of would-be homebuyers watching the value of their parents’ and grandparents’ homes crash in a matter of months. However, since 2012, growth in new home sales has been outpacing existing home sales, finally giving some support to housing starts.

With interest rates still slow to increase, access to credit is predicated on a bank’s willingness to lend. As consumers amass more debt, they become a greater risk for banks. After the sharp pullback in consumer credit that we saw in 2009 and 2010, consumers are once again taking on debt at a steady clip. The slope of the regression on the level of total consumer credit for the last five years is 0.81; compare that with the slope of the regression of the 25 years prior to that (0.38) and you can understand why banks would have concerns regarding a mortgage borrower’s ability to make their debt payments.

While house price growth and demographic variables vary greatly across regional housing markets, national data points to continued expansion of the housing market, albeit at a slower pace than we saw immediately following the recession. While there are no clear signs of another housing bubble developing in the near future, we need to continue to monitor growing consumer debt and changing demographics for clues as to the future of the housing market.

Despite the availability of tools, true factor-based corporate bond portfolios haven’t yet become as ubiquitous as traditional...

By Dylan O'Connell  |  Companies and Markets