The S&P 500 index is generally considered the best indicator of how U.S. stocks are performing. It represents 500 companies, spread across 11 sectors, and is a broad basket of stocks containing the companies most widely owned by individual investors. It accounts for roughly 80% of the overall value of the U.S. stock market. As the index is tracked by numerous index funds and ETFs, inclusion automatically leads to these funds buying into the company. Therefore, the S&P 500 is regarded as the premier index to join for American companies.

To be included in the index, a company needs a market cap of at least $13.1 billion, must have positive earnings and most of its shares must be in the hands of the public. The last hurdle to entry is acceptance by an S&P Dow Jones Indices Committee, which meets monthly. Because the criteria employed by this committee are unknown, predicting specific changes to the index is a significant challenge, but one that can make a big difference when it comes to generating excess returns.

One way to investigate changes to the index over time is to review changes in sector weightings. The S&P is currently heavily tilted towards the Information Technology sector, which accounts for roughly 28% of the index. Its weighting has grown significantly over the past five years from just over 21% in 2016.

The biggest change during that time span, however, is in Communication Services, which jumped from 2% of the index to almost 11% today. This increase was driven mainly by sector reclassifications which added Meta, Alphabet, Netflix, and Disney to the sector. At the same time, the Consumer Staples and Energy sectors both have had significant drawdowns in weighting compared to five years ago. 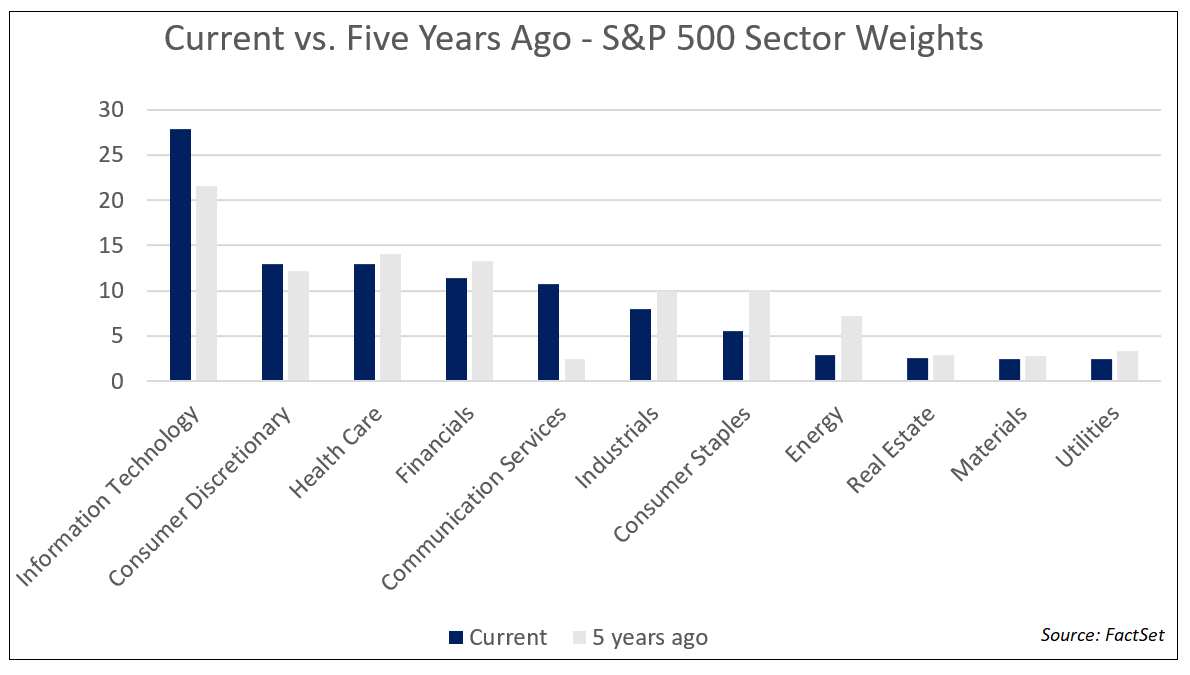 Another way to analyze changes to the index is to look at ways in which different sectors have been affected by additions and removals. Since the start of 2018, the inclusions have mainly affected Information Technology, although there have also been many additions to the Industrials and Health Care sectors.

Interestingly, the Real Estate sector hasn’t had any company additions over the past four years. This sector accounts for just over 2% of the index weight and is comprised of 29 companies in total; the largest company, American Tower Corp., has a weighting of just 0.33%. 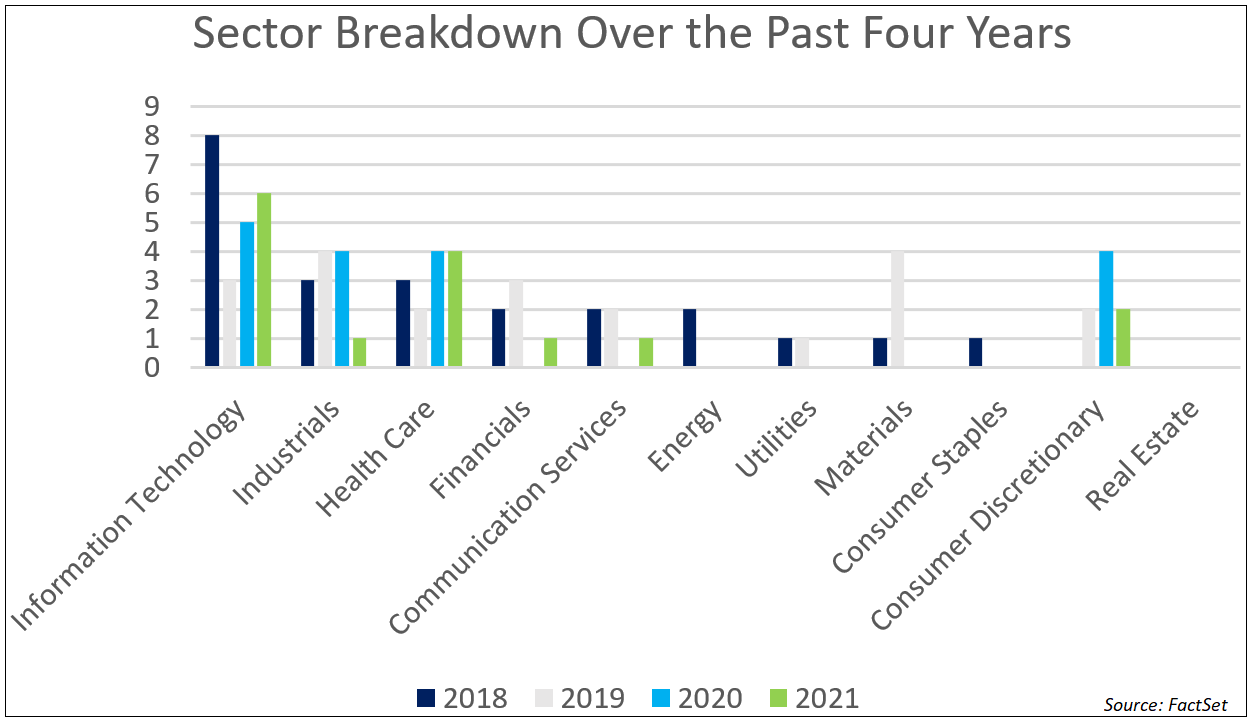 If we look at companies that are still publicly traded but were removed from the S&P 500 over this period, we see that the majority are in the Consumer Discretionary sector, more than twice that of Energy and Health Care. This drop demonstrates the decline in the dominance of the Consumer Discretionary sector over the past four years, a change that is quite notable when compared to the other sectors. 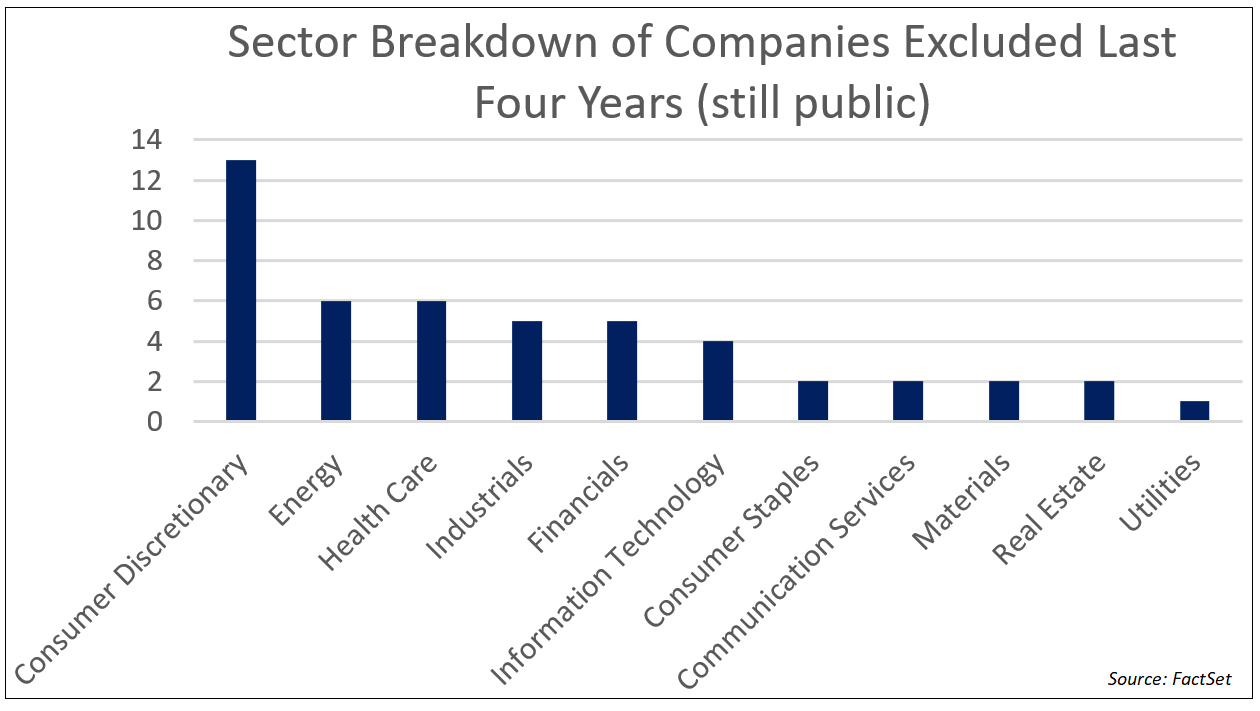 Predicting the changes ahead of the rebalancing taking place every quarter is a challenge, which is why FactSet spent time building out its prediction engine over several years. Taking into consideration the criteria for inclusion into the S&P 500, we predict which companies are likely to be added or removed from the index within a six-month time frame. Since 2018, FactSet has been able to predict on average 60% of companies before they get included into the S&P 500, with 2021 proving to be the best year yet. We have predicted over 70% of the companies that have been included into the index this year, and an impressive 76% of all our predictions were correct. 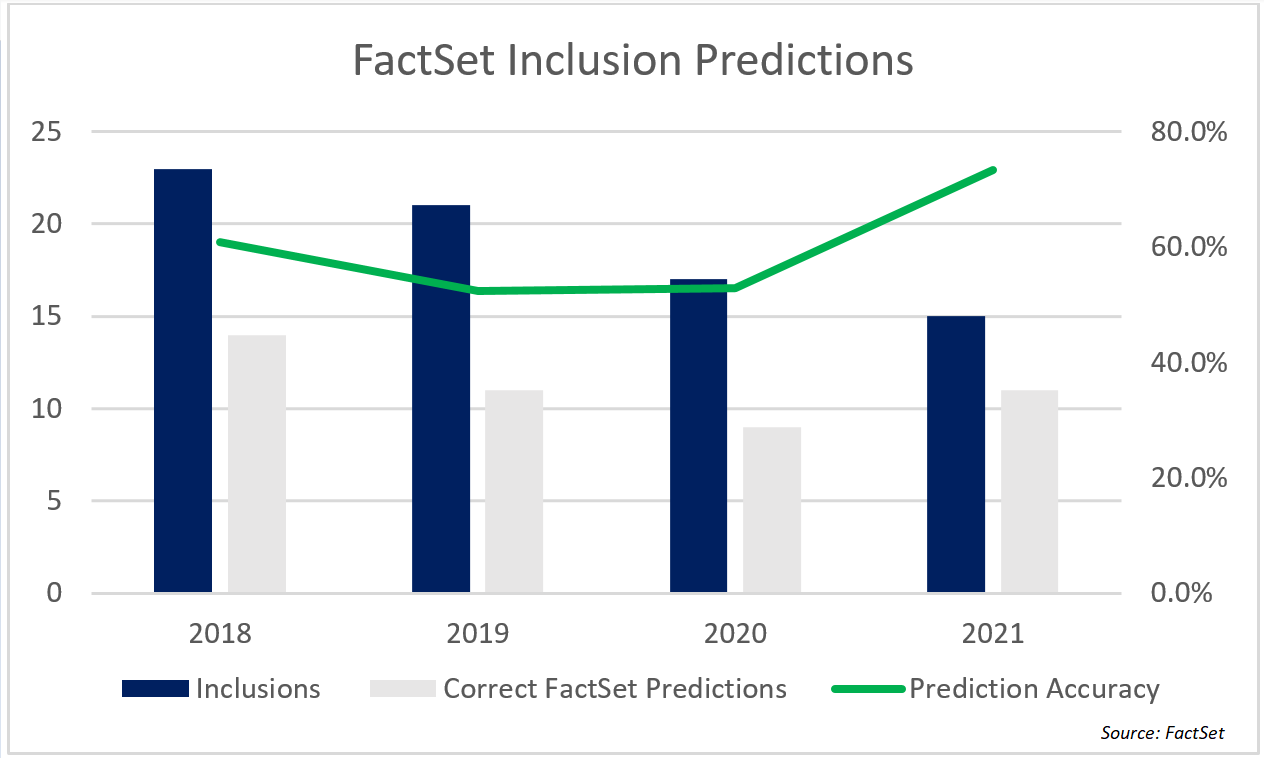 On the exclusion side, the hit rate looks even better. Since 2018, FactSet has been able to predict over 83% of companies before they get excluded from the S&P 500, with 2021 again proving to be the best year yet, with 100% prediction accuracy for the 15 companies leaving the S&P 500. 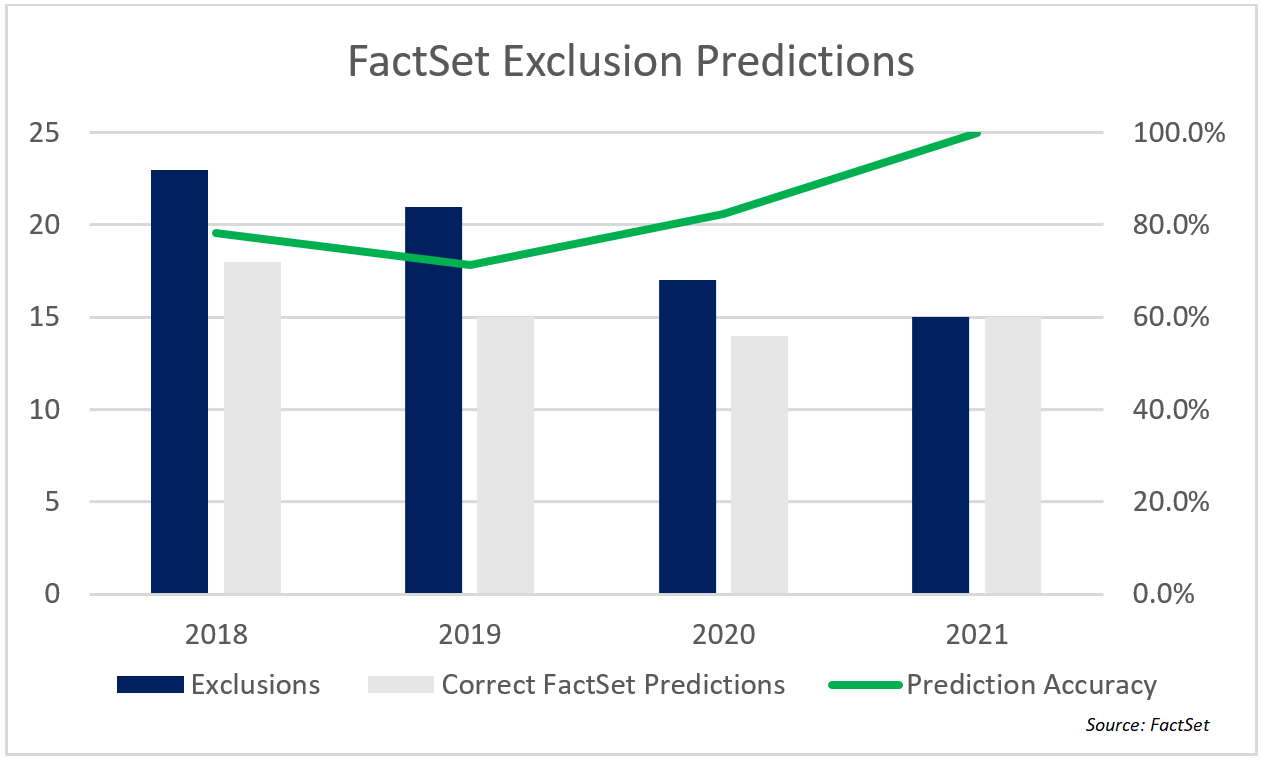 FactSet tackled this challenge with its S&P 500 Predictions Signal, which we developed to help our clients identify potential changes to the index. On average FactSet predicts approximately 20 inclusions and 20 exclusions per year.

Our backtesting shows how a portfolio* of our predictions of inclusions would have performed against the index itself. FactSet counts a prediction as accurate if the company gets included within six months from when the prediction was last made. FactSet can predict the same company continuously throughout a period and calculates every prediction daily. 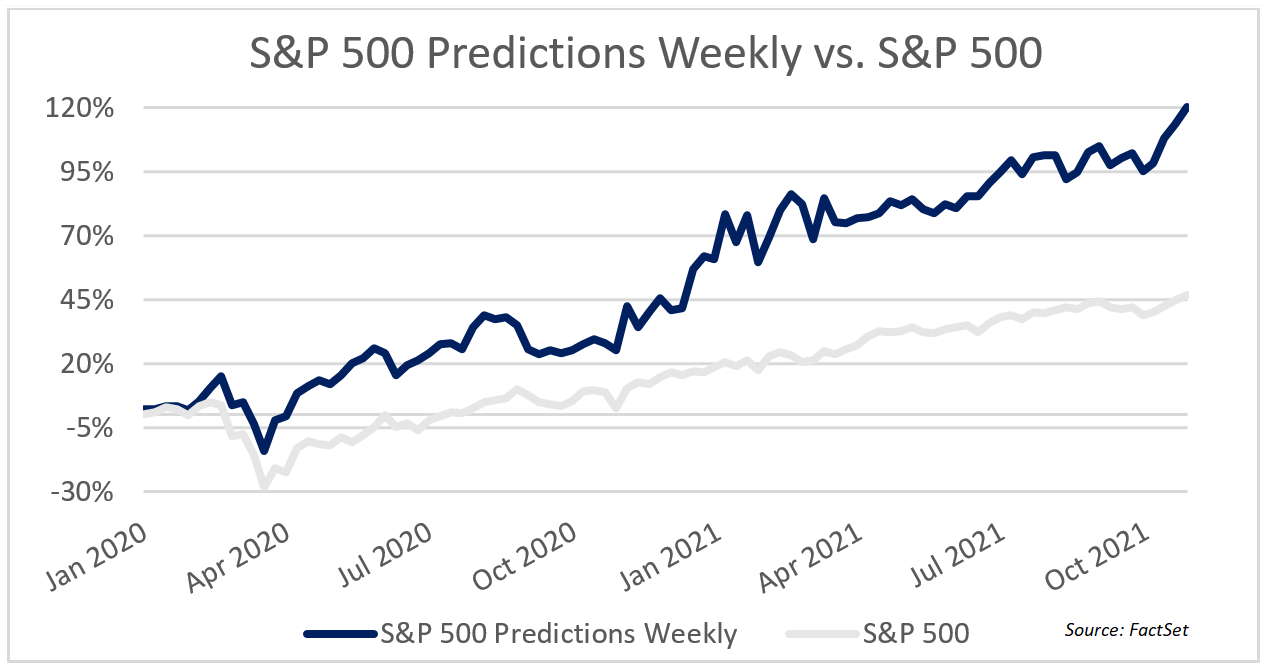 FactSet predictions take all the rules of getting included into the S&P 500 into consideration. It is important to acknowledge that the companies we predict are likely to have positive momentum, and the momentum could continue, leading to the outperformance of the general market. This can be one of many reasons why the portfolio* of active predictions has had such an outperformance compared to the S&P 500 index at large.

To see FactSet’s S&P 500 predictions, subscribe to FactSet Signals in the FactSet Workstation. You can also access the predictions via the FactSet Signals RESTful API. With the next rebalancing taking place in December, FactSet is currently predicting additions within the Financials sector and exclusions within the Consumer Services sector. Although the S&P 500 index is rebalanced four times a year, the committee meets monthly and intra-quarter changes may occur. FactSet produces S&P 500 constituent predictions daily.

*The portfolio contains all of FactSet’s active predictions on companies that we predict that could potentially get included into the S&P 500. And at any given period, the average number of companies in this portfolio is five. The portfolio is equal weighted and re-balanced weekly.

Linking memorable quotes and moments from the original Top Gun movie to global fixed-income markets in 2022.