Tracking the Infrastructure Asset Class in a Downmarket 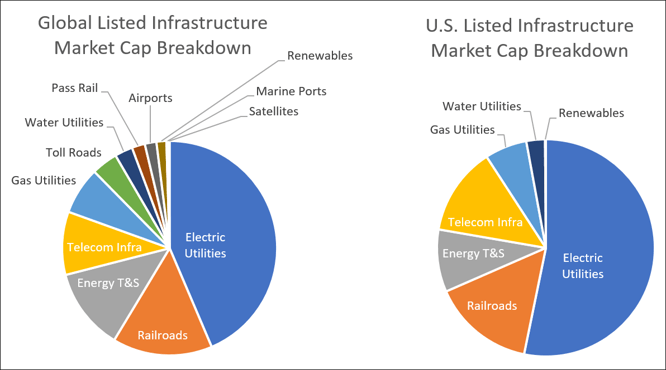 Why Infrastructure Could Be of Interest

Many asset allocation models recommend a ~5% weighting to infrastructure as well as a ~5% weighting to real estate, as these “real assets” are generally good hedges against inflation. ~5% relative outperformance year-to-date in 2022, a period of sharply rising inflation expectations, supports the view of a good inflation hedge. Real assets can be tied to inflation by rising underlying asset values, frequent inflation-adjusted pricing mechanisms, and/or the rising price of outputs such as natural resources and commodities.

One often-mentioned positive of the infrastructure asset class is the steadier, contractually supported long-term cash flows—and the yields that can therefore be supported—currently averaging 3.5%. Another could be diversification benefits that arise when adding an asset class of low beta and low correlation with other assets and sectors.

Of course, there’s no free lunch! On the flip side, potential negatives for infrastructure equities can be more short-term volatility because of emerging market exposure, the interest rate impact on longer duration assets, the lumpiness of contract awards, and some limits to perceived growth in an upmarket.

The ~5% outperformance year to date of all listed infrastructure equities, as measured by the Global Listed Infrastructure Organization (GLIO), continues its record of long-term outperformance. FactSet surfaces 132 GLIO indices of various construction., including the following:

Let’s look closer at performance after sorting the listed equities by global region and developing vs. emerging markets. Below we see that North and South American infrastructure performance has generally led the asset class in Asia Pacific and Europe, the Middle East, and Africa. In addition, developed market infrastructure equities have typically outpaced emerging markets.

Looking at the global sectors, listed infrastructure performance in September 2022 was in the red for all regions and sectors and, indeed, only Passenger Rail stocks had positive performance in the third quarter overall. Year-to-date, Energy Transportation & Storage has been the only global infrastructure sector to be in the green. On a five-year horizon, Railroads, Telecom Infrastructure, and Renewables have been the strongest areas, whereas non-rail freight transportation (i.e., Airports, Marine Ports, and Toll Roads) and Satellites have been notably weaker.

While many will understand that the Telecom Infrastructure sector has grown with technology and data use, there may be some surprise over how well the Railroad sector has performed over the past 10 years. Railroad advantages during this period could have been their economic exposure that was augmented by a focus on improving operations, unit handling, and infrastructure investments. At the same time, on a go-forward basis, the rails hold some advantages over other types of freight. Key issues to consider in the future could be economic exposure and some structural pressures on coal and other fuel transport volumes.

With the recent moves in the market, current valuations on an EV/EBITDA basis as per GLIO are currently near the 13.3x level, with the last 10 developed market infrastructure transactions averaging in the 15.1x range. Private transactions have tended to trade above-listed valuations over time but have seen those valuations move closer to the public markets, perhaps due to public valuation levels and economic fears. Private market infrastructure funds available to invest in are near record levels, suggesting some support for the sector when investments are available and at good valuations. There is some ongoing dynamism in public vs. private ownership of infrastructure assets: What is the best type of owner for early-stage or late-stage projects? What structure is best for moving various projects through the approvals processes? 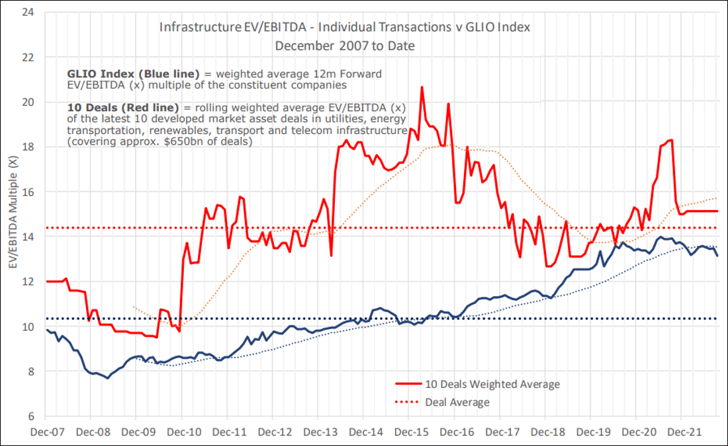 Growth Expectations Back to Trend

The infrastructure space has performed relatively well in the past several periods. Going forward, valuations should continue to be supported by a global need for infrastructure improvements and the spending (i.e., growth) required for an energy transition, energy security, and climate adaptation. However, the asset class may also face issues of higher financing rates, conflicting environmental concerns, policy uncertainties, and economic headwinds, including potential delays in project timelines. After the third quarter of 2022, expectations have reset to trend-like growth heading into earnings season, and everyone’s sharpened pencils for 2023.