U.S. IPO Activity Drops Dramatically in the First Half of 2022

There were two main factors at play depressing IPO activity in the first six months of this year. First, after peaking in the first quarter of 2021, the number of IPOs by Special Purpose Acquisition Companies (SPACs) retreated in the final three quarters of last year; during the first six months of 2022, the numbers slowed to a trickle. Second, the U.S. stock market suffered its worst first half of a year since 1970, as surging global inflation forced central banks to institute aggressive rate hikes after a decade of easy monetary policy. As of June 30, the S&P 500 was down 20.6% year to date. 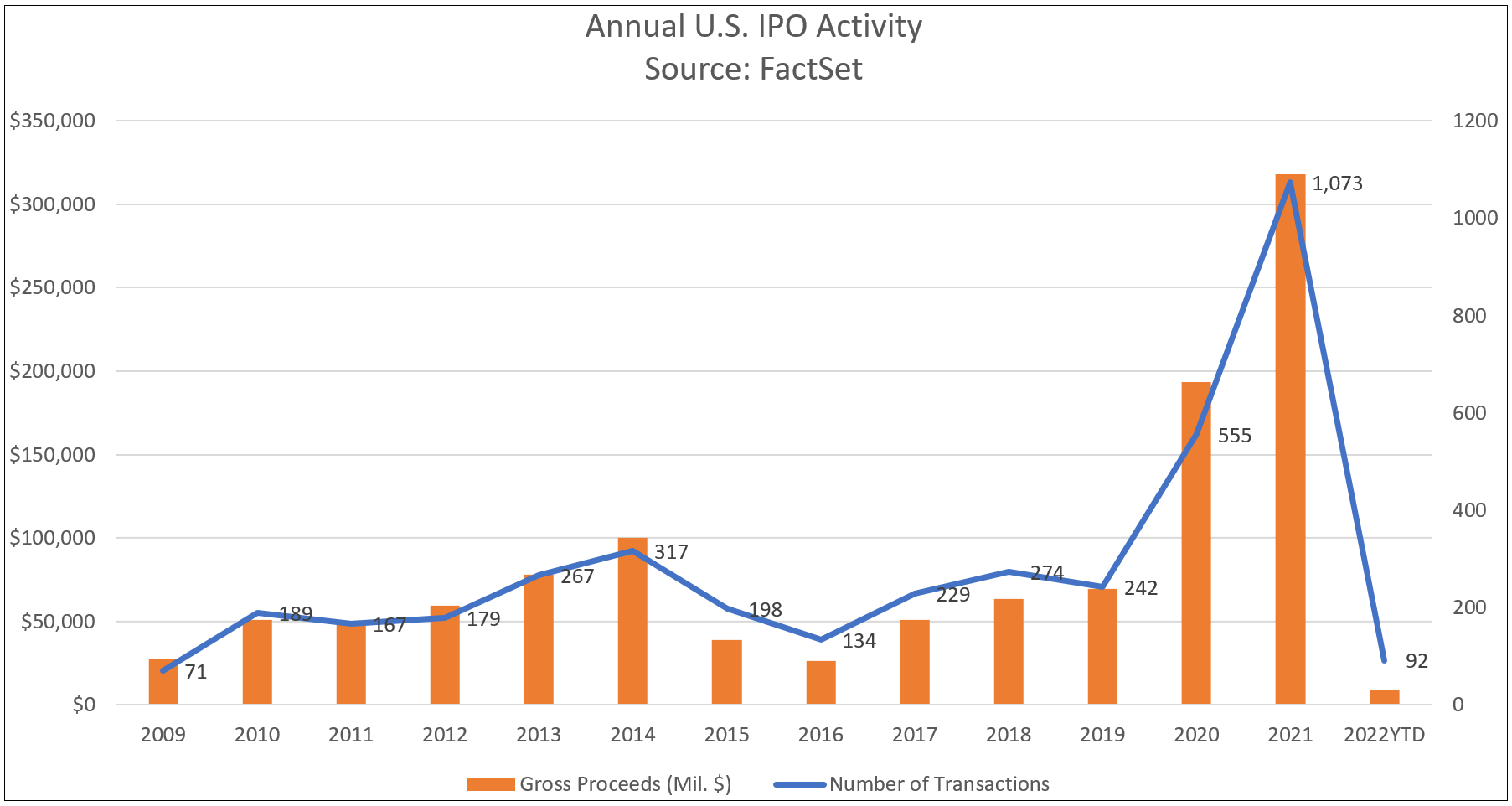 Let’s examine the other trends that characterized the U.S. IPO market in the first half of 2022 and what we can expect for the second half of the year. 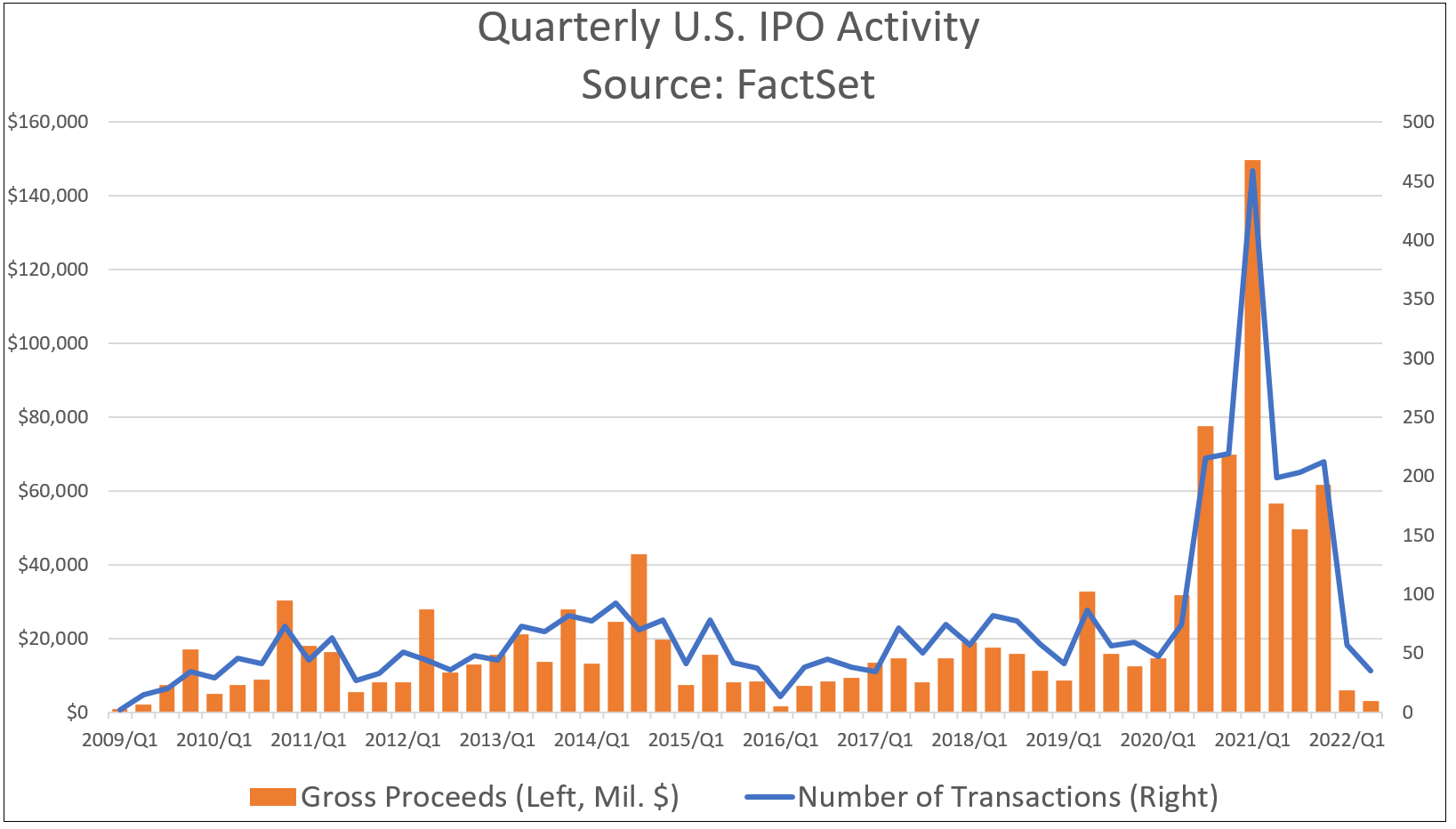 In the first quarter, the average IPO raised just $104.7 million; in the second quarter, the average size fell to just $85 million, the smallest quarterly average since at least 2008. There were just three IPOs in the first half of 2022 that raised more than $500 million: TPG Partners (priced January 13, raised $1.1 billion), SPAC Screaming Eagle Acquisition Corp. (priced January 6, raised $750 million), and Bausch & Lomb (priced May 5, raised $630 million).

The top 10 IPOs for the first quarter raised just $3.6 billion in total; in the second quarter, the total for the 10 largest IPOs was just $2.5 billion. Compare this to the fourth quarter of 2021 when the top 10 IPOs raised a staggering $25.8 billion thanks to Rivian Automotive’s mega-IPO (priced November 20, raised $13.7 billion). The second quarter registered the lowest top 10 total since the first quarter of 2016. Interestingly, because of the dominance of smaller IPOs in the first half, four SPACs made the top 10 list.

The Finance Sector Continues to Dominate IPO Volume, But the Lead Has Shrunk

As we saw above for all IPOs, financial-sponsor-backed IPOs tended to be much smaller than average in the first half of 2022. Gross proceeds for VC-backed offerings totaled $908 million, while PE-backed IPOs raised just $318 million in the first six months of the year. Even if activity picks up in the second half of the year, IPOs backed by VC and PE funding are likely to show their weakest annual performance in 2022 since at least 2008.

Direct Listings Drop Off in 2022

Not surprisingly, weakness in the stock market reduced the number of companies opting for direct stock listings to bypass the traditional IPO route via Wall Street underwriters. We saw six companies go public via direct listings in 2021; so far in 2022, there has just been one. Cannabis provider Bright Green began trading on the Nasdaq on May 17. With a reference price of $8 per share, the stock opened at $15.99 and soared as high as $36.44 on its first day of trading. However, the stock has not fared well since that first week and is now trading at around $2.20 per share.

The surge in IPOs we witnessed in 2020 and 2021 was fueled by a boom in offerings from SPACs, or blank check companies. SPACs are companies that are created with the express purpose of effecting a merger, capital stock exchange, asset acquisition, stock purchase, reorganization, or similar business combination with one or more businesses. According to FactSet data, there were 55 SPAC IPOs in 2019, 309 in 2020, and 589 in 2021. So far in 2022, there have been just 27. 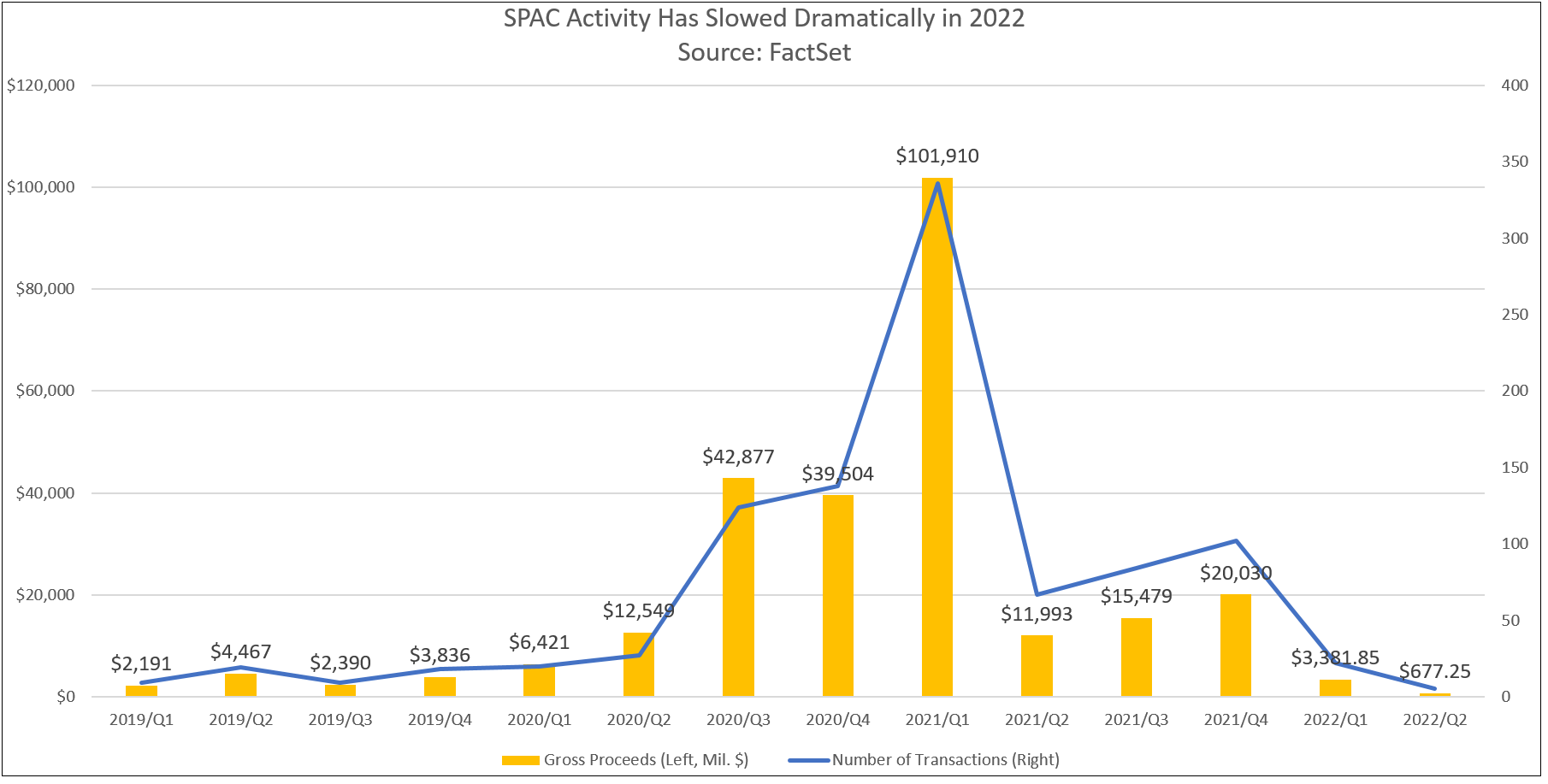 The abrupt downshift in SPAC IPOs appears to be the result of a combination of several factors. First, the market witnessed high redemption rates by initial SPAC IPO investors following merger announcements, which led to steep post-announcement stock price declines. This removed key funding for the newly formed entities, creating an even tougher environment for SPACs looking for acquisition targets. The sheer number of companies looking for merger targets means that many SPACs will be unable to find a business combination within the specified time period, usually two years, and will be forced to return money to investors.

Second, SPACs have come under increased regulatory scrutiny by the U.S. Securities and Exchange Commission (SEC), discouraging new market entrants. Some companies are now under investigation by the SEC and others face lawsuits from shareholders. With this market segment increasingly under the microscope, IPOs have been canceled and mergers called off. All these factors have been exacerbated by the weakness in the equity market as the Federal Reserve aggressively hikes interest rates.

One of the biggest IPO stories this year was the delisting of Didi Global (name at IPO: Xiaoju Kuaizhi) from the New York Stock Exchange. The company IPO’d in June 2021, raising $4.4 billion and placing it on the top-ten list of the all-time biggest IPOs on U.S. exchanges and the second biggest by a China-based company (after Alibaba’s 2014 IPO). The delisting, announced in December 2021, came after Chinese regulators began an investigation of the company’s competitive practices and pricing. On June 13, 2022, the company ticker changed to DIDIY as it began trading over-the-counter.

Months before the Didi delisting announcement, the controversy around the company immediately following its U.S. IPO led the SEC to tighten disclosure requirements for Chinese companies looking to go public in the U.S. in August 2021. This effectively put a stop to IPOs by China-based companies on U.S. exchanges. In the first half of 2021, 47 companies based in China or Hong Kong, China, IPO’d on U.S. exchanges; in the second half of the year, there were just four. In the first six months of 2022, there have just been four. The increased scrutiny of these IPOs by both Chinese and U.S. regulators may lead to more Chinese companies delisting from U.S. markets.

Looking ahead at future IPOs, 159 companies have released initial preliminary filings since the beginning of 2021 and are still in registration (this excludes offerings that are postponed or withdrawn). Just five of these companies are not SPACs. Given the sharp decline in SPAC activity we’ve witnessed in recent months and the current market weakness in the face of continued interest rate hikes, it will be interesting to see if the IPO market can recover in the second half of 2022.