Despite the 28.9% increase in the S&P 500 in 2019, the number of initial public offerings on U.S. exchanges fell by 14.2% compared to 2018. The first quarter of the year started on bad footing as the U.S. government shutdown (December 22, 2018-January 25, 2019) shuttered the Securities and Exchange Commission (SEC), essentially bringing IPO activity to a halt. IPO activity rebounded in the second quarter before easing in the third quarter as market volatility increased. The S&P 500 saw an 8.5% jump in the fourth quarter, yet the number of IPOs remained flat. With markets off to a strong start in 2020, the pipeline indicates strong activity in the first quarter.

The end of the mega tech IPOs

The big IPO story this year was the disappointing performance of several much-anticipated technology IPOs. Coming into 2019, the market was anxiously awaiting initial public offerings for the next generation of tech stocks, which included Airbnb, Lyft, Peloton, Pinterest, Slack, Uber, and WeWork. The biggest disappointments were Lyft and Uber, which continue to trade significantly below their offer prices. Even Slack, which went public via a direct listing, has underperformed.

The market is no longer interested in overpaying for companies that have yet to turn a profit. Investors are demanding to see growing revenues and a path to profitability as well as a solid leadership team. WeWork (The We Company), a shared office space company, pulled its planned IPO in September in the face of intense scrutiny after it reported $1.37 billion in losses in the first half of 2019. Shortly afterward, the CEO stepped down; it is unclear if or when the company will go public. The highly anticipated Airbnb IPO is now expected to take place in 2020 but it appears that this will happen via a direct listing.

We may see more technology companies opting for direct stock listings in 2020, bypassing the traditional IPO route via Wall Street underwriters. We’ve had just two over the last two years: 2018 brought us the Spotify debut and Slack went public in 2019. While Spotify got off to a rough start in 2018, ending the year down 24% from its debut, the stock is now up 18.2% from its offer price. Slack has also had troubles following its June 2019 offering and is currently trading 8.3% below its offer price. Two companies are expected to follow the direct listing path in 2020: Airbnb and GitLab. It will be interesting to see how many more follow suit.

Over the last few years, we saw a surge in Chinese (China and Hong Kong) companies listing on U.S. exchanges; however, this activity slowed dramatically in 2019. According to FactSet data, 46 Chinese companies IPO’d in the U.S. in 2018; in 2019, that number declined 33% to 31. It’s not just the number of Chinese IPOs that has contracted; the offerings have been much smaller in size than we saw in previous years. The 31 IPOs of 2019 have raised a total of just $3.8 billion, a 61% drop from the $9.8 billion raised in 2018. The 2018 tally included four mega-IPOs, while the biggest Chinese IPO of 2019 raised just $775 million (DouYu International Holdings Ltd.).

The escalation of trade tensions last year between the U.S. and China could be part of the reason for the decline in Chinese IPOs on U.S. exchanges. There are also growing incentives for Chinese companies to IPO locally. The Hong Kong exchange’s recent easing of rules is encouraging more companies to consider an IPO there. In addition, the new Science and Technology Innovation Board in Shanghai with its looser listing restrictions is expected to convince Chinese tech companies to IPO within China rather than on U.S. markets.

Despite a Slow Start, 2019 Was a Strong Year for IPO Activity 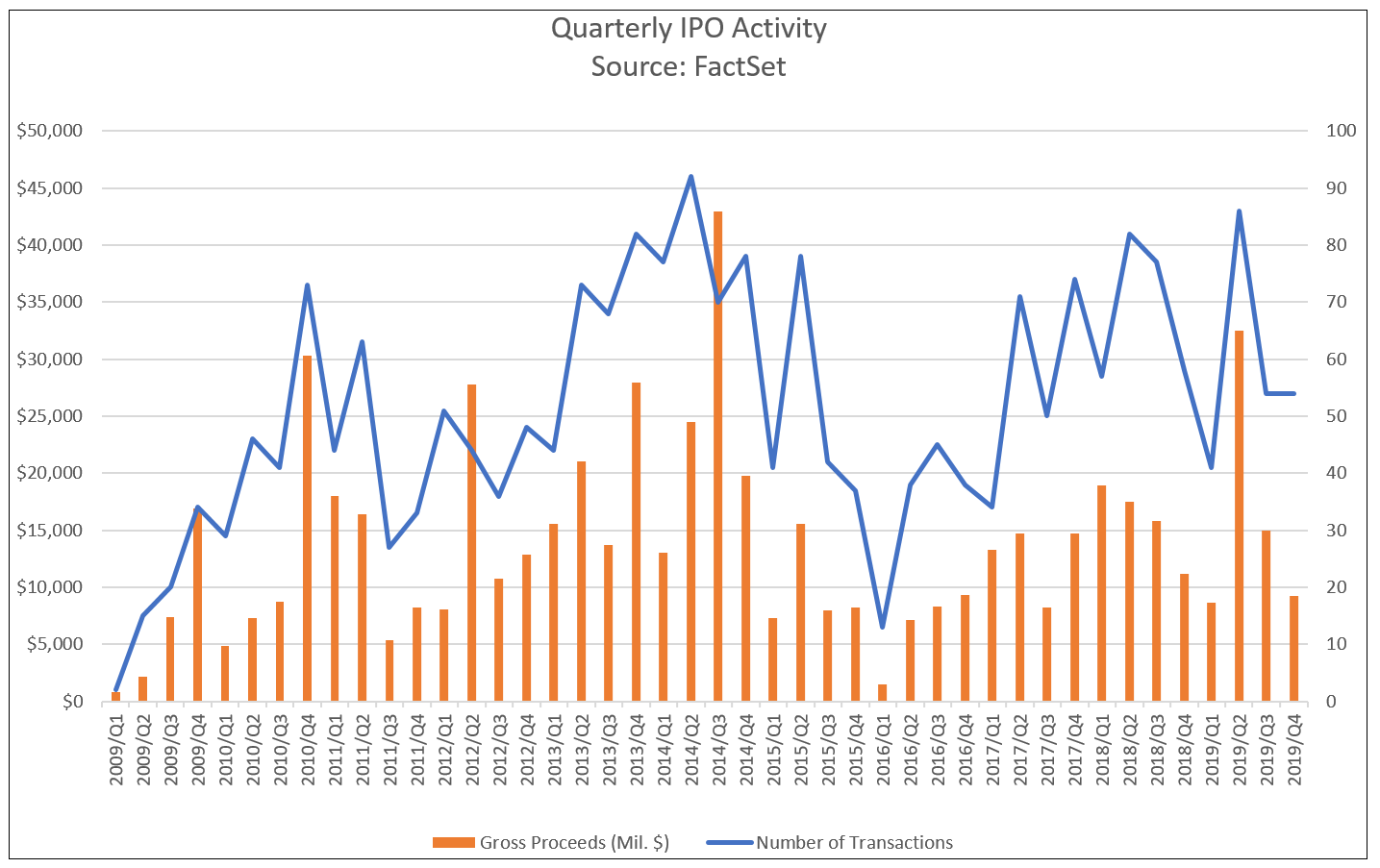 Despite the strong presence of large offerings for the entire year, there was a clear retreat to smaller deals in the fourth quarter. Just two of the IPOs in the final quarter of the year raised more than $500 million; more than half of the quarter’s IPOs (51.9%) raised less than $100 million. The quarter’s biggest IPO was Brazilian brokerage firm XP, which raised $2.25 billion in its debut. This was the fourth biggest IPO of 2019, behind Uber ($8.1 billion), Avantor ($3.3 billion), and Lyft ($2.6 billion). 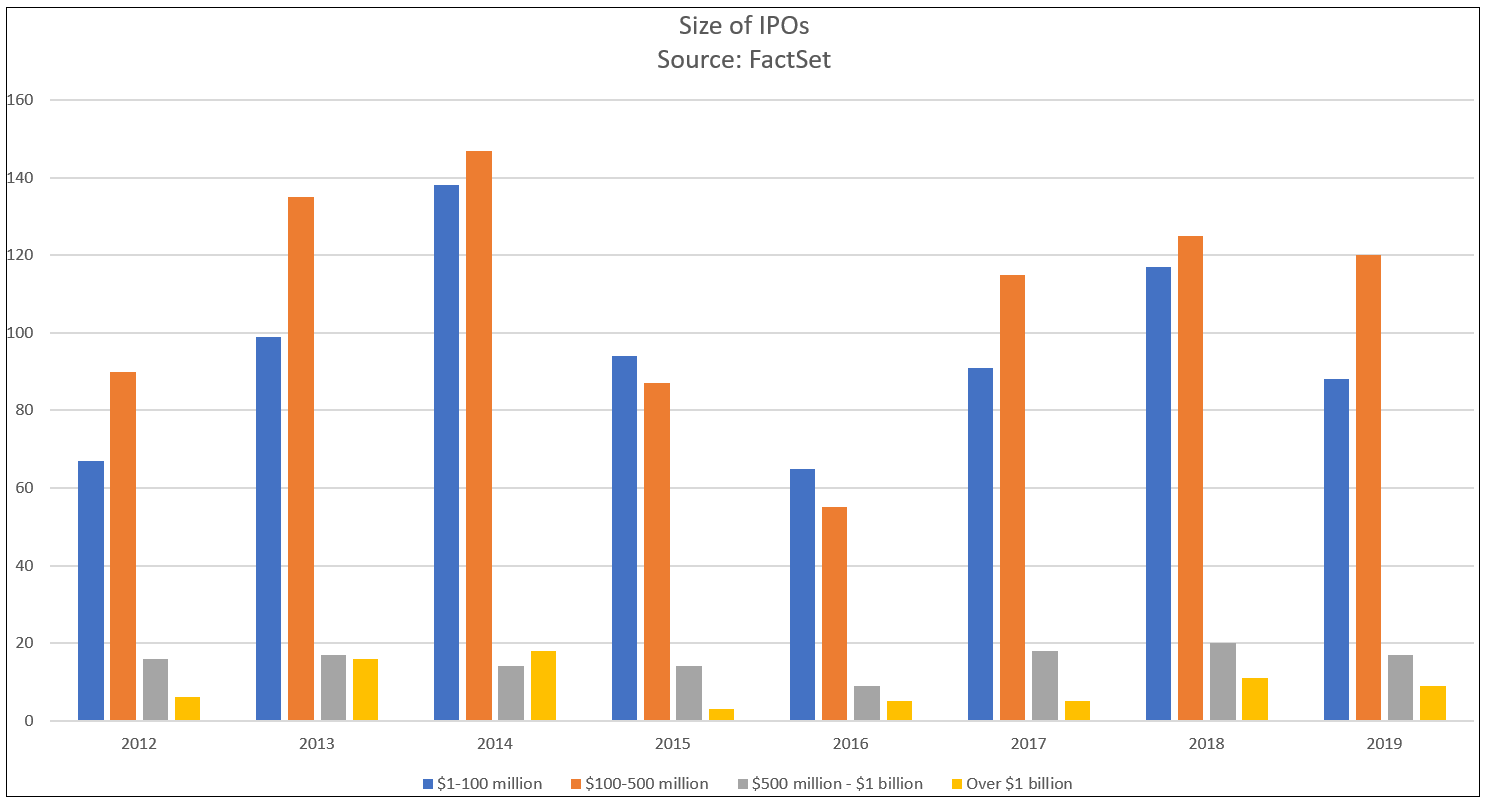 Finance Sector Leads Q4 IPOs in 2019, Both in Terms of Volume and Money Raised

The Finance sector led all other sectors in IPO volume in 2019, coming in with a total of 81 IPOs for the year, followed by the Health Technology sector with 61 IPOs. Even though Technology Services had just 41 IPOs for the year, the sector raised more money than any other sector, with total gross proceeds of $25.7 billion. This total was driven by Lyft, Uber, and XP IPOs. The Finance sector raised $15.2 billion followed by Health Technology with $8.1 billion.

Financial Sponsors Retreated in the Second Half of the Year

In 2019, 99 of the 235 IPOs (42.1%) priced on U.S. exchanges were backed by financial sponsors, i.e., private equity or venture capital firms; this was the lowest share of total IPO volume since 2008. In the fourth quarter, just 35.2% of IPOs were financial-sponsor-backed. However, in terms of capital raised, financial sponsor-backed IPOs represented 60.1% of the total gross proceeds in 2019; this was the highest share since 2014. All nine of the mega IPOs in 2019 were backed by financial sponsors. In the fourth quarter, financial-sponsor-backed IPOs accounted for 45% of total gross proceeds, largely due to XP.

There were 80 venture-capital-backed IPOs in 2019, down 19.2% from 2018. On a quarterly basis, VC activity peaked in Q2 with 35 IPOs following the government shutdown, but Q4 only registered 16 offerings. The offerings in 2019 tended to be larger, with gross proceeds totaling $28.9 billion. There were five mega VC-backed IPOs in 2019. The size of the average VC-backed IPO was $366.1 million, the highest seen since 2012 when Facebook debuted. In Q4, VC-backed IPOs raised just $1.9 billion, the lowest amount since the second quarter of 2017.

Private Equity-Backed IPOs Lag in Volume, but Not in Size

Private equity-backed IPO volume fell for a second consecutive year, with 19 offers compared to 31 in 2018, a 38.7% decrease; however, the average size of the offerings rose sharply. After seeing no private equity-backed IPOs in the first quarter, there were 12 in the second quarter. However, activity dropped off in the second half of the year, with just four PE-backed IPOs in the third quarter and three in the fourth quarter. 2019 total gross proceeds rose 1.6% from 2018, with the average offering size rising from $329 million last year to $546 million in 2019, the highest average size since 2014. This surge was due to the four PE-backed IPOs with gross proceeds exceeding $1 billion: Avantor, XP, SmileDirectClub, and Tradeweb.

With U.S. equity markets trading near all-time highs, 2020 appears to be off to a good start for companies looking to go public. In fact, the pipeline looks quite healthy. 67 companies that released initial preliminary filings in 2019 are still in registration (this excludes offerings that have been postponed or withdrawn). At the same time, investors continue to monitor geopolitical risks, which include the escalation of tensions in the Middle East, as well as economic factors that could impact equities.