This week, the United States and European Union (EU) announced plans to increase U.S. shipments of liquefied natural gas (LNG) to Europe. This comes as the EU aims to diversify its natural gas supply away from Russia in the coming years. However, several obstacles could impact the effectiveness of this deal, primarily infrastructure limitations and the sheer size of Europe’s dependence on Russian gas. As a follow-up to last week’s analysis on the United States’ ability to grow oil production, here we focus on U.S. LNG exports and the ability to quickly backfill any potential loss of Russian natural gas in Europe.

As has been well reported, Europe is heavily reliant on Russian natural gas, and there is no easy replacement. The chart below, which details European natural gas storage levels since 2019, provides a good illustration of this reliance. Leading up to the Russia-Ukraine conflict, European gas storage was well below levels seen in recent years thanks to a cold 2020/2021 winter and a global shortage in natural gas supply that has persisted since.

For the remainder of 2022, the chart illustrates a scenario where Russia no longer exports gas to the EU and there isn’t any subsequent change in demand or increase in non-Russian supply. While highly unlikely, this scenario exemplifies how reliant Europe is on Russian gas. Under this bookend scenario, storage levels would be depleted by early summer. Even if Russian gas imports are reduced to 50% of 2021 levels, European gas storage would risk depletion by the end of 2022. The EU has previously indicated that it has enough gas in storage to last through this winter, but not much longer than that. 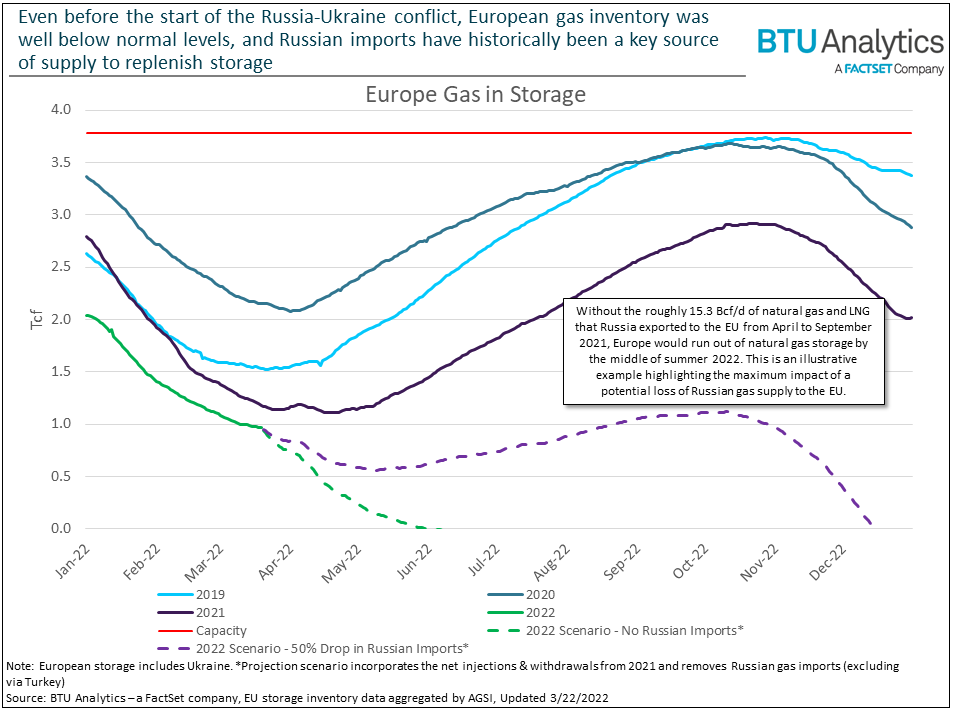 Such a shock would likely drive a much larger shift in global natural gas trade, sending increased LNG cargoes to Europe. However, the U.S. has little ability to export additional LNG in the near term, as shown in the chart below. Following recent expansions, natural gas pipeline flows to U.S. LNG export facilities have been steady near full capacity. 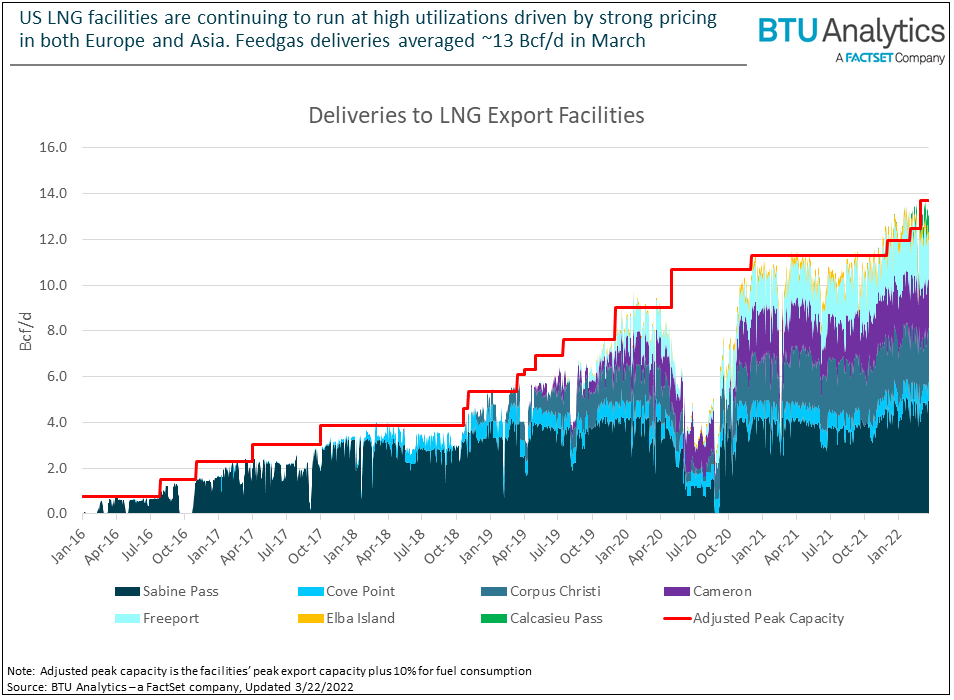 With minimal upside beyond the roughly 13 Bcf/d of gas that is flowing to U.S. LNG facilities for export, increasing LNG exports to Europe would require a reshuffling of global trade. As of January 2022, the U.S. sent 75% of its LNG exports to Europe, leaving just 2.7 Bcf/d of LNG that was shipped to Asia and South America, shown in the chart below on the left.

However, Japan recently announced plans to divert LNG cargoes to Europe, leaving even less U.S. LNG that could potentially be diverted. But these levels may themselves be unsustainable from May to August, given that South America typically increases its LNG imports during the Southern Hemisphere winter.

At the same time, it’s important to keep in mind that Europe isn’t the only region with low natural gas storage levels. Natural gas storage is low across the globe, as exhibited by the rise in global LNG prices well before the Russia-Ukraine conflict grabbed headlines. Because of this global tightness, BTU Analytics estimates that 1.3 Bcf/d of global LNG supply could shift to Europe without a major increase in pricing, given that the EU imported an average 1.3 Bcf/d of Russian LNG in 2021 that could be sent elsewhere.

However, Japan has recently declined to purchase a Russian LNG cargo and other countries could follow suit, though major consuming countries like China and India are likely still willing to purchase Russian gas. Still, this represents less than 10% of the gas volumes required to replace Russian gas imports. 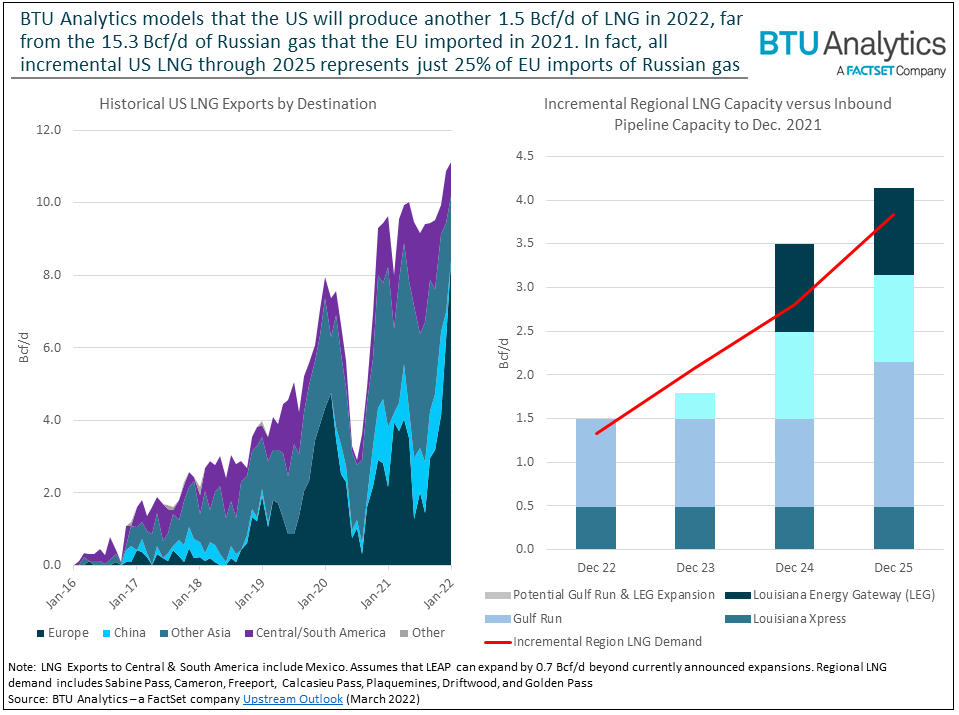 While the immediate ability of the U.S. to supply Europe with LNG appears limited, several expansions in the coming years could help further displace Russian gas. In the latest Henry Hub Outlook, BTU Analytics models that five LNG facility expansions will occur along the Gulf Coast over the next five years. The largest of these are expected to enter service beyond 2025.

As the chart above right shows, an expected 3.8 Bcf/d of additional U.S. LNG demand is expected to come online by the end of 2025. However, very little of this new demand has been contracted specifically to European buyers. This doesn’t mean that this new LNG is off limits to Europe, but it indicates that European natural gas prices would need to rise in relation to Asian prices, as they have done in recent weeks, to entice LNG cargoes.

While the U.S. will struggle being the sole replacement for the EU’s reliance on Russian natural gas, there are additional ways to divert global LNG supply to Europe. In late 2019, Russia completed construction on its China-bound Power of Siberia pipeline, which is expected to ramp up to a capacity of 3.68 Bcf/d by 2025. Russia is also in talks with China to build the Power of Siberia 2, which would be even larger than the first pipeline. However, this project is a long way off, and because of the gradual ramp in capacity on the Power of Siberia 1, BTU Analytics estimates that there is roughly 0.9 Bcf/d of available capacity today that could displace LNG that would have otherwise been delivered to China.

Considering this, and the 1.3 Bcf/d of displaced Russian LNG exports to the EU discussed above, BTU Analytics estimates that only 2.2 Bcf/d of global natural gas supply could be diverted to Europe in a crunch. If all incremental U.S. LNG growth since 2021 is also shipped to Europe in 2022, available supply in the region would increase by another 1.5 Bcf/d.

In total, these assumptions still only account for a quarter of Russia’s gas exports to the EU in 2021. If we factor this into the European storage slide discussed earlier, European storage would still be depleted before the end of the year if all imports of Russian gas are halted. In the scenario where Russian gas imports are reduced by 50%, European gas storage could survive through the end of 2022, but still be depleted in early 2023. 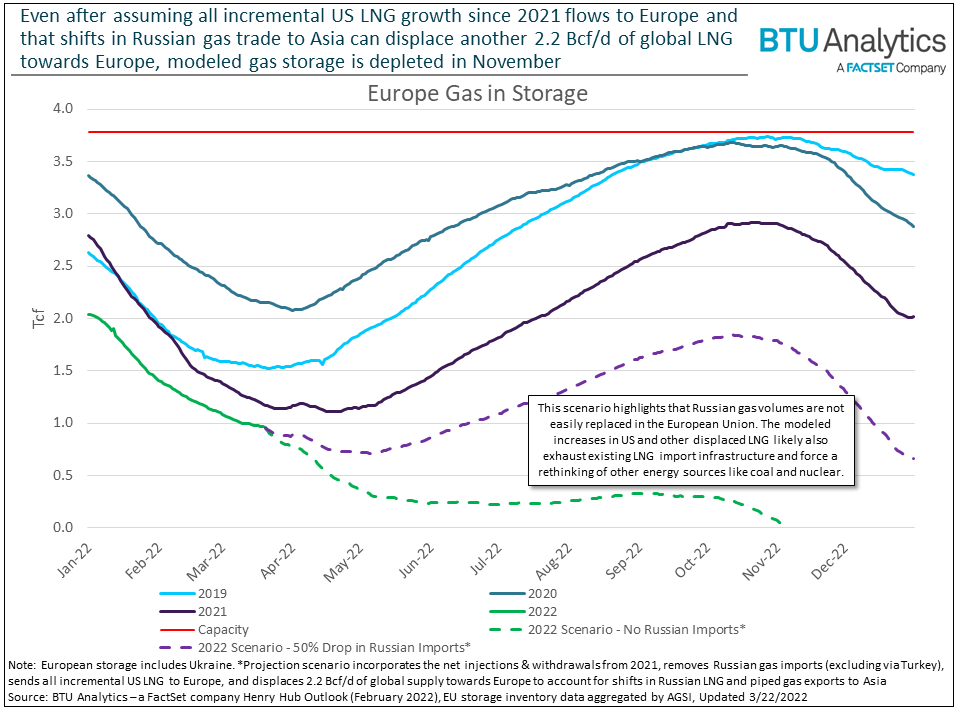 These scenarios are meant to illustrate the fact that shifts in global LNG trade alone are unlikely to replace Russian natural gas exports to the EU. In addition, there are infrastructure bottlenecks that would arise from a rapid increase in LNG imports in France, Spain, Belgium, and the Netherlands while pipeline imports in Germany, Ukraine, and Belarus plummet. Therefore, any large-scale replacement of Russian natural gas likely also requires supply growth from areas like Australia or the Middle East and a rethinking of demand and alternative energy sources. However, few other options may be available in the near term, given years of declining coal generation and a planned German phaseout of nuclear power by the end of 2022.