The Bureau of Ocean Energy Management (BOEM) recently announced provisional winners of five offshore leasing sites off the coast of California. The third major offshore wind auction this year, the California sale marks the first commercial offshore leasing sites to be sold outside of the Atlantic. With other major auctions planned in areas of the Gulf of Mexico, Oregon Coast, Central Atlantic, and Gulf of Maine, large competitive auctions continue to drastically increase the installable offshore wind capacity in the U.S. As offshore wind continues to gain traction, we’ll take a look at where the U.S. stands with both its active and proposed leasing sites.

The U.S. has ambitious goals for offshore wind – 30 GW of operational capacity by 2030. With only 42 MW of current operational capacity (Block Island & Coastal Virginia Pilot), 30 GW in seven years may be all but achievable. However, the BOEM is making significant strides in providing offshore opportunities for developers. Below is a map of the U.S. with sold, active leases colored green. Red areas indicate regions under study, Call Areas, or Requests for Interest (RFI) where leasing areas have not yet been finalized.

In 2022, several milestones were reached through the New York Bight, Carolina Long Bay, and Northern/Southern California auctions. These auctions marked important steps towards making offshore wind a viable resource in the U.S. Of the leases auctioned this year alone, developable offshore wind capacity amounted to nearly 12 GW, determined by using the lease area and an assumed power density of 3 MW/km2. While developers may use different technology or find more efficient ways to site their turbines within a given leasing area, using 3 MW/km2 provides a general insight into the potential capacity that an area could host.

Offshore wind could have outsized impacts depending on the region. BTU previously covered how its development would impact natural gas generation in ISO New England. However, we can review the most recent auctions, California and Carolina Long Bay, to determine what their impact could be on surrounding generation mixes. California ISO (CAISO) and Duke Energy Progress are the likely recipients of the offshore generation to come from the California and Carolina Long Bay auctions, respectively. The figure below shows their monthly generation mix, with an overlay of the potential generation (red shaded area) to come from offshore wind.

Offshore wind could have the greatest impact for CAISO, where modeled capacity factors reach an annual average of 52%. This also represents the highest annual average among any other region in the U.S. The most notable impact will be to natural gas, which averages 47% of daily generation in the region. However, adding more renewable generation into either of these regions is certain to displace existing thermal assets in some capacity.

While 2022 was a historic year, offshore wind could see similar strides in the near-term. The timeline below shows when a particular lease or group of leases were/will be sold and the associated installable capacity. 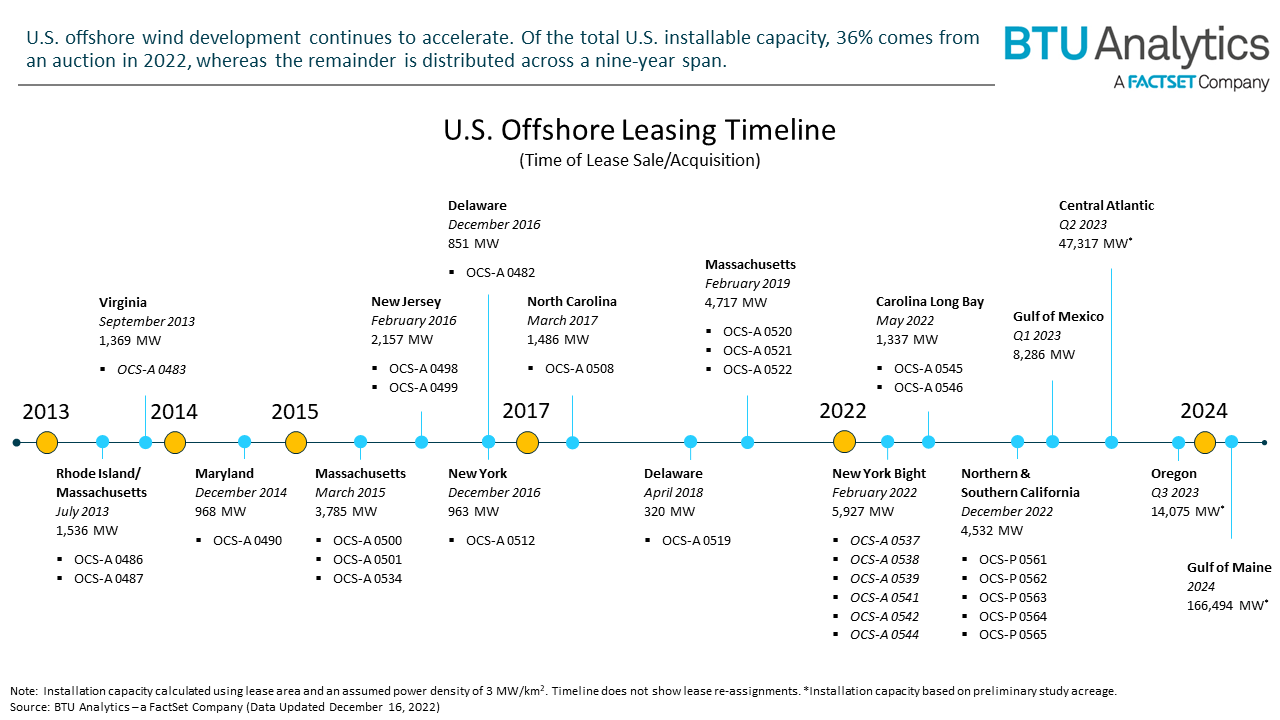 The planned auctions in 2023 and 2024 provide a strong outlook for offshore wind. Sizeable regions, like the Central Atlantic and Gulf of Maine, could be hosts to several GWs of potential capacity. However, these regions are still in preliminary planning stages and their initial study areas are not representative of the final leases that will be auctioned. Nonetheless, the quantity of planned auctions shows that offshore wind will continue to make headlines in the coming years. Be sure to look out for future Energy Market Insights in which we’ll continue to track offshore leasing and associated wind developments in the U.S.