Almost by definition, mergers and acquisitions are about change, and with all change comes uncertainty.

For transactions, uncertainty is a function of company management and post-deal integration. The market will eventually take a view, but management can often control the narrative to minimize uncertainty. And there’s nothing the market likes less than uncertainty when it comes to deals, as AOL/Time Warner and HP/Compaq have shown us.

Every so often, however, unexpected external events deliver a shock of uncertainty to the whole system: 9/11, the 2008 financial crisis, and now Brexit. In each of these cases, markets initially reacted in an expected way (negatively), followed by an attempted return to normalcy (i.e., mean-reversion).

With M&A, longer times in execution and integration mean the direct impact of the markets is generally muted. Certainly macro events may impact early-stage discussions or transactions that are still being planned but not yet formal, but the measurable impact can only be felt after some time.

Despite initial shock, the unexpected outcome of the EU referendum in the UK has yet to work its way through the M&A system. Looking at comparable events in recent memory, as well as overall trends in deal activity, may provide some insight into the expected effects.

Taking the US as a base case, the impact of 9/11 was minimal on M&A. The market had already started its correction from the dot-com boom, and the rate of deal activity was also in decline. In the chart below, the change in latest 12 month (LTM) deal activity along with the LTM change in the S&P 500 highlights this. It also highlights that US buyers began their activity decline earlier than non-US buyers. US buyers prove to be a leading indicator of activity.

Moving forward to September 2008 (at the peak of the market turmoil during the financial crisis), the same pattern emerges: US buyers had already begun their pullback, with non-US buyers lagging behind but also in decline. Current conditions in the US show a decline in activity with the S&P 500 flat/negative and US buyers on the decline, with non-US buyers following.

Looking at rolling 12 month activity and value (to smooth out monthly variance), value tends to drop during the crisis periods. Volume is the real barometer, dropping as the market turns and increasing on the upswing. In 2001 and 2008, the decline in volume was already present, and despite the recent string of increased activity the decline appears to have started already in 2016. 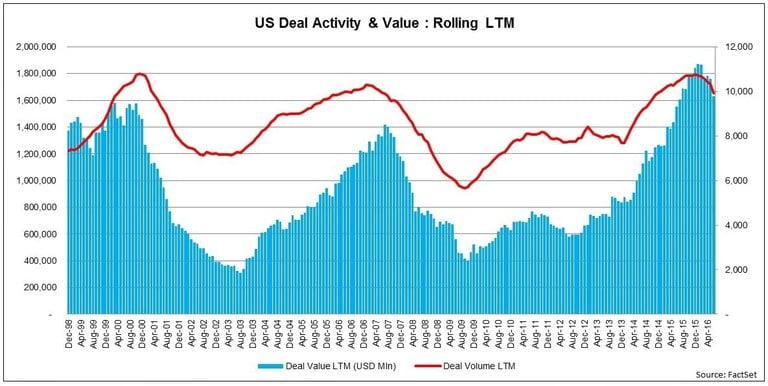 The EU excluding the UK deal market also warrants analysis. The EU was not directly impacted by 9/11; markets were already on the decline and deals were as well. Interestingly, the domestic EU deals aren’t leading non-EU buyers as strongly as was the case in the US. However, the 2008 financial crisis in the EU ex-UK shows the same pattern as the US, with all deals declining. The currency rate may also have an impact on the trends overall.

As with the US, rolling 12 month activity and value show a similar pattern, with value dropping dramatically during the crisis periods but volume representing a leading indicator, albeit weaker in the EU, dropping as the market turns and increasing on the upswing. In 2001 there isn’t an immediate decline, but in 2008 the decline in volume is already present.

Following the Brexit vote, volume appears to have peaked, with trends on the decline. Currency rates appear to have an impact on foreign investment here as well, with a strengthening currency reducing non-EU investment in deals.

Focusing now on the UK, where the actual referendum results will be most direct, the data show an amalgamation of US and EU ex-UK patterns. The effects of 9/11 were indirect on the UK deal market, and with the 2008 financial crisis an already declining market continued its slide. As with the EU, currency rates impact non-UK buyers. 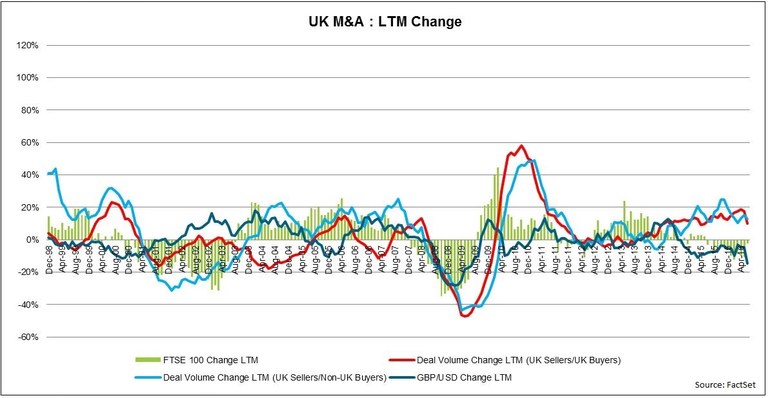 The rolling 12 month shows that the UK was nearing peak levels of volume and value earlier this year, but as the polls showed a narrowing margin between “Remain” and “Leave” camps early in 2016, the deal markets decided that external uncertainty was not something buyers wanted to factor and activity began a decline. 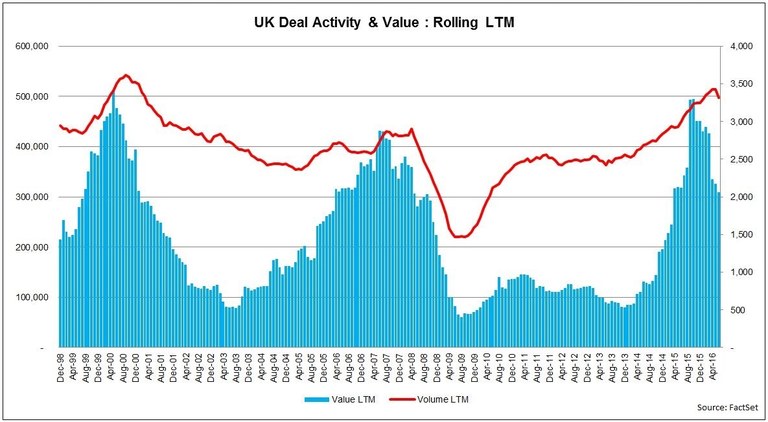 In absolute terms, a direct comparison of the first half of 2015 with the first half of 2016 shows that 2015 had an upward trend while 2016 has a downward trend. Overall Q1 volume was 21% higher in 2016, but value was 36% lower, and moving to Q2 shows volume declining 9% compared to 2015 and value dropping 87%. June’s uncertainty appears to have clearly shaken the UK deal market. 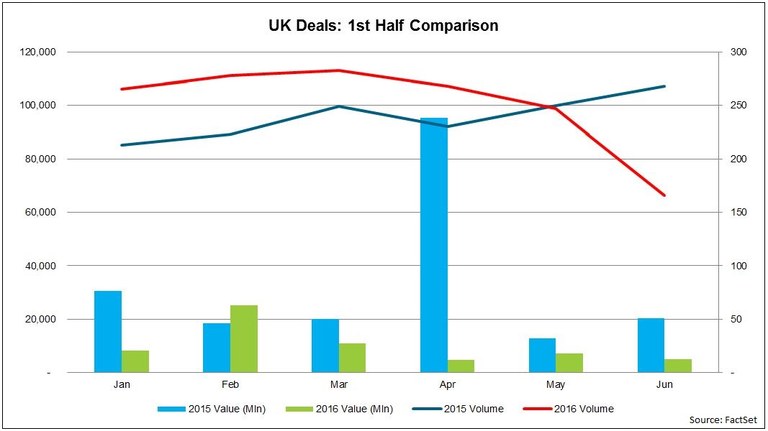 Where Does the UK Stand? A New and Incomparable Reality

Uncertainty drives away deals. There’s a long and uncertain path for the UK in its relationship with the EU. Outsiders want to know what the EU relationship will be before buying in the UK. The EU including the UK is the largest single market economy in the world, but with the UK as a stand-alone economy with unknown access to the EU, there is serious uncertainty for potential buyers.

Brexit campaigners were keen to point out that the UK is the fifth largest economy in the world, but with 45% of its exports and 51% of its imports tied to the EU, it is unclear how closely that rank was tied to the UK’s position as an access point to the EU.

Additionally, with the post-Brexit sterling at a 30-year low against the US dollar, there are pricing concerns for UK buyers. Companies may be cheaper now, but will there be value in the long-term.

Regulatory issues will also have a long-term impact, specifically whether the post-EU UK regime coordinates with the EU or maintains distinct oversight. Extra hurdles and expenses to meet UK regulations may put off buyers, again depending on the final negotiated relationship with the EU.

In this case, the Brexit outcome has no direct comparable. It has brought a self-inflicted and an unknown level of risk to any deal discussion, and the actual impact to the UK deal economy may not be seen for several years when the results and execution are clearly articulated and put into action. For now, speculation and uncertainty are still rampant, and until order is restored and a post-Cameron administration is in place, UK deal-making is on pause.

The immediate impact seems to be isolated to the sterling, but with deal activity already on the decline it will likely continue its downward slide for some time.