Initial public offerings on U.S. exchanges rose for the second year in a row in 2018, reaching their highest levels since 2014’s peak. However, the strong year was largely the result of a high number of IPO’s in the middle two quarters of the year; activity slowed considerably in the fourth quarter with the sharp jump in market volatility. To add insult to injury, the U.S. government shutdown (December 22, 2018-January 25, 2019) shuttered the Securities and Exchange Commission (SEC), essentially bringing IPO activity to a halt.

As of January 29, we have only seen three companies IPO on U.S. exchanges in the new year: MMTec, Inc. (priced on January 8), DiamondPeak Holdings Corp. (priced on January 18), and New Fortress Energy (priced on January 25). This compares to 15 IPOs in the first four weeks of 2018. With the SEC only above to perform very basic market functions with a limited staff during the shutdown, no one was available to give feedback to companies planning to IPO.

The pipeline is building. There are 71 companies that released initial preliminary filings in 2018 and are still in registration (this excludes offerings that have been postponed or withdrawn). In addition, another 19 companies have released their initial preliminary filings so far in 2019 and remain in registration. Three widely anticipated IPOs, Airbnb, Uber, and Lyft (preliminary filing issued on December 6), were both expected to take place in 2019. Even though the government shutdown has now ended, it remains to be seen whether those plans will stay on schedule. February 14, 2019, is a key date for companies hoping to IPO in 2019. If they can’t price their IPO by this date, they will need to provide updated, audited 2018 financial information.

2019 is off to a rough start for the IPO market. But let’s look back at the fourth quarter of 2018, and the year overall.

Despite a Slow Q4, 2018 Still Was a Strong Year for IPO Activity 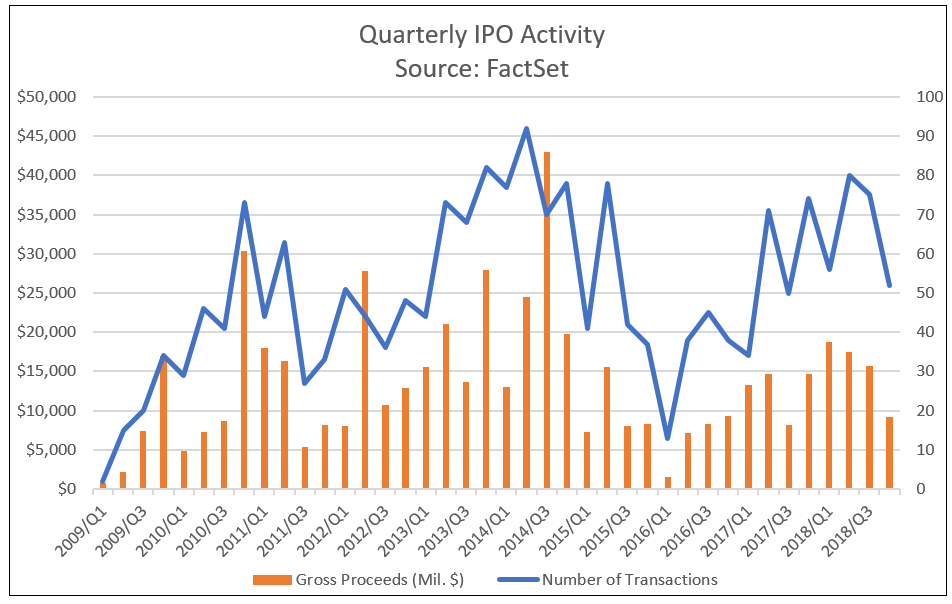 The fourth quarter of 2018 was also the weakest of the year in terms of gross proceeds. Gross proceeds from IPOs totaled $9.2 billion for the quarter, down 42% from Q3 and 38% from a year earlier. However, for the year, gross proceeds totaled $61.1 billion, up 20% from 2017’s $50.9 billion. As with the volume of offerings, 2018 represented the strongest year for gross proceeds since 2014.

Not only were there more IPOs in 2018 than we’ve seen since 2014, 2018’s IPOs were larger in size. For the year, 11.4% of all IPOs had gross proceeds above $500 million, compared to 10% in 2017. The 2018 share was the highest since 2013. Despite the strong presence of larger offerings for the entire year, there was a clear retreat to smaller deals in the fourth quarter. Just three of the IPOs in the final quarter of the year raised more than $500 million, representing 5.8% of all offerings. More than half of the quarter’s IPOs (53.8%) raised less than $100 million.

The May 10 IPO of AXA Equitable Holdings was the largest U.S.-listed IPO of the year, but it still failed to meet expectations. The offering for this French insurer was expected to raise $3.5 billion; however, the IPO was priced at just $20 per share, below its expected range of $24-27 per share, raising just $2.75 billion. The IPO came at a time when insurance companies have been under a lot of pressure, with shares of Prudential Financial, Principal Financial, and MetLife all down significantly for the year. AXA stock ended the year down 18%. 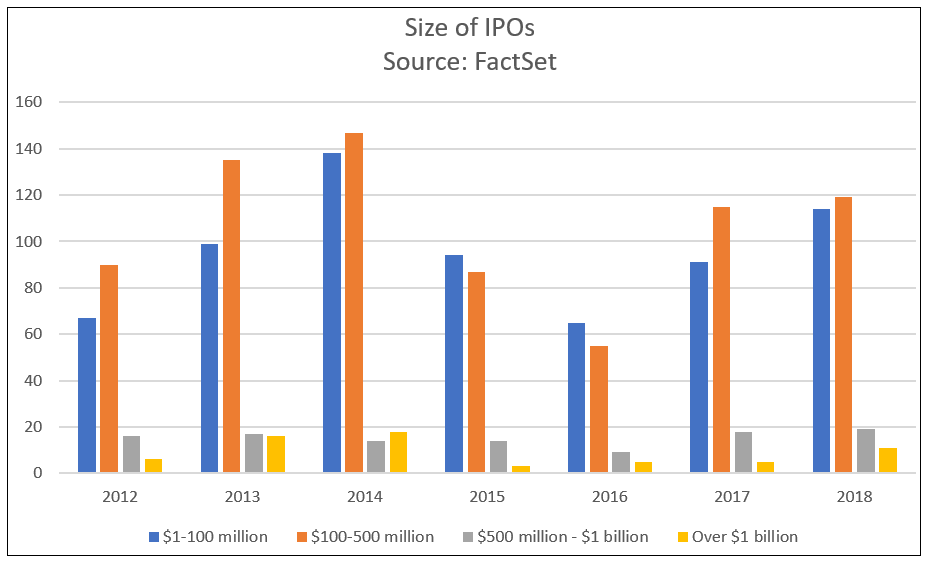 Of the 52 initial public offerings in the fourth quarter, 19 came from the Health Technology sector, the highest representation of any sector. The Finance sector was next with 13 IPOs. However, the Technology Services sector led the quarter in terms of money raised, with gross proceeds of $3.6 billion for just eight IPOs, compared to $2.1 billion for Health Technology and $1.6 billion for Finance. The Technology Services sector’s offerings included the only two mega-IPOs for the quarter: StoneCo, Ltd., which priced on October 25 and raised $1.2 billion, and Tencent, which priced on December 11 and raised $1.1 billion.

The average size of Health Technology sector IPOs for the year was just $101.3 million; the largest one was Moderna, Inc., which priced on December 7 and raised $604 million. This was the only IPO in this sector that was above $500 million for the fourth quarter and for the year.

Financial Sponsors Retreated in the Second Half of the Year

In terms of capital raised, financial sponsor-backed IPOs represented just 49.7% of total gross proceeds in 2018; this was the third year in a row where this ratio stayed below 50%. In this case, the ratio peaked in Q2 at 53.2% and stayed below 50% in the second half of the year (46.5% in Q3 and 45.4% in Q4). This indicates smaller IPOs backed by financial sponsors, on average.

There were four mega VC-backed IPOs in 2018, one in each quarter of the year: iQIYI (priced March 29, raised $2.3 billion), GreenSky, Pinduoduo, Inc. (priced July 25, raising $1.6 billion), and Tencent. Performance for these companies’ stocks has been mixed. Shares of iQIYI performed very well in the three months following its IPO, surging by 184%. However, the stock retreated from those lofty highs to hit negative territory in December; a January recovery now has the stock up 25.1% above its original offer price. On the other hand, GreenSky was hit by a weak earnings report in early November, causing the stock to dip 5.38% in one day; currently, the stock is trading 52.9% below its offer price. Pinduoduo stock largely underperformed since its IPO, but is currently up 8.6% from its IPO offer price. Tencent IPO’d just seven weeks ago and is up 7.7%.

Private Equity-Backed IPOs Lag in Volume, But Not in Size

Slack Technologies, Inc., which provides a workplace instant messenger and collaboration application, is expected to follow the lead of digital music service Spotify in pursuing a direct stock listing in 2019, bypassing the traditional IPO route via Wall Street underwriters. Spotify stock outperformed in the first six months following its April 3, 2018, debut, but the overall market volatility and downturn in technology stocks took their toll in the fourth quarter; the stock ended the year down 24% from its debut.

The IPO market was strong in 2018, but market weakness in Q4 dampened activity leading into the new year. On top of that, the 35-day government shutdown brought 2019 activity to a halt. Even though the shutdown has ended, it could still determine the pace of activity not just for the first quarter, but for the entire year, especially if a longer term government funding package can't be worked out by February 15.

While recent bear markets all had different causes and characteristics, there are some consistent signals that we can glean from...