Rockies production is often overlooked in the shadow of the Permian and Northeast, but the last few winters have the region commanding among the highest prices of the Lower 48. Two of the last three winters saw Opal basis peak above $20/MMBtu in the face of severe winter storms. This record-high pricing coincides with a shift in Rockies dynamics. Opal now trades at a premium to Henry Hub on an annual average basis, while CIG continues to price at a discount when, historically, the two traded within 10 cents of each other. The growing disconnect between Opal and CIG is the result of a combination of factors, including declining production, steady demand, and pipeline capacity constraints. 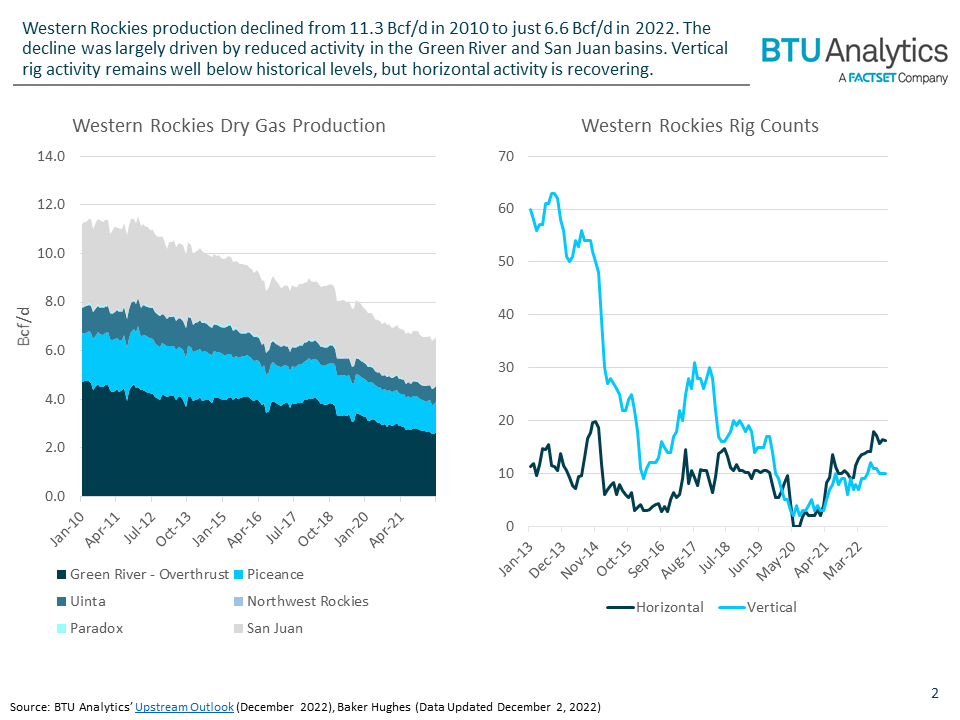 Western demand has been relatively stable over the last decade, and growth is expected to remain muted in the near-term. Between 2010 and 2022, western demand only increased by approximately 1.1 Bcf/d, which was spread out over a variety of different fundamentals. Power demand increased 0.5 Bcf/d, ResCom increase 0.4 Bcf/d, and Mexican exports increased 0.2 Bcf/d during the period. With demand expected to remain flat through the next five years and Western Rockies production expected to continue declining, the western market will continue to rely on imports from other sources of supply to balance the region.

In addition to supply from the Western Rockies, the western gas market imports gas from the Permian and western Canada in order to meet demand. Historically, these imports displaced Western Rockies production, leading to its decline. However, both export corridors are currently takeaway capacity constrained. Furthermore, the El Paso outage removed an additional 0.8 Bcf/d of capacity between the Permian and the western gas market, resulting in increasingly tight regional balances.

While current market dynamics point to gas demand remaining strong in the West, supply is likely to continue to be restricted. All three supply corridors to the western market – Canada, the Permian, and the Western Rockies – are full with no current prospects for relief outside of a return to service on El Paso. As a result, continued declines in Western Rockies production are likely to lead to strength in Opal basis, signaling a need for additional gas in the West. BTU Analytics will be exploring the shift in Rockies basis markets and its impact on near-term production in the upcoming edition of the Upstream Outlook that will be published on January 13. Request a sample by emailing btuanalytics@factset.com.