In the US, regulations surrounding drilling wells used for injecting fluids falls broadly under the Environmental Protection Agency (EPA) via the Underground Injection Control (UIC) program. Under this program, a well is classified as belonging to one of six distinct categories (referred to as “Classes” and ranging from I to VI), each with its own rules governing things like location of the well, its depth, and the fluids injected. States can apply for primacy over specific well classes, which would allow them to regulate the permitting of those wells while still following general EPA standards. While most states that have oil and gas disposal wells (typically Class II wells) have undergone the process to obtain primacy over Class II wells, the Class VI well (used for CO2 sequestration) is still largely permitted by the EPA. Today’s Energy Market Insight gives an overview of the Class VI well, why this classification matters, and where changes are occurring in the US to the permitting process of this type of well.

In general, to claim the 45Q credit for geologically sequestering CO2 underground (expanded recently to $85/t of CO2), the CO2 needs to be injected into a Class VI well. The Class VI well type was established by the EPA in late 2010 with requirements that aimed to protect underground drinking water sources from the long-term storage of CO2. While there are lots of technical differences separating the various classes of wells, the important thing for an entity looking to capitalize on 45Q credits through a Carbon Capture and Sequestration (CCS) project is that the CO2 injection well needs to be a Class VI well. In almost all states, the permit for this Class VI well needs to come from the EPA. However, WY and ND are the only two states that currently have primacy over Class VI well permitting, and CO2 injection wells in those states can be permitted through their own state process. In every other state, primacy for Class VI wells currently exists within the EPA. States like AZ, TX, and WV are currently in the process of putting together an application to have state primacy over these wells, and LA has an active application being reviewed. 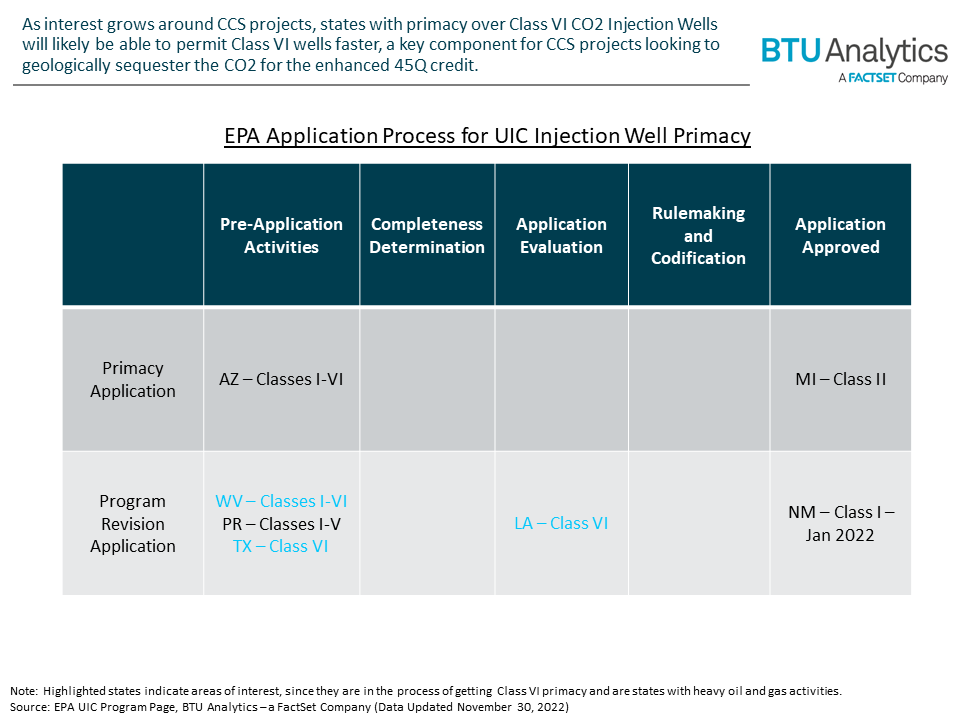 State primacy offers some advantages over the EPA, largely around resources and timing. Currently, the EPA has been reported to be understaffed, which is particularly ill-timed given the recent interest in Class VI applications. On top of that, permitting these wells through the EPA is a multiyear process, one which could, in theory, be shortened when states have control over the process of permitting wells within their state. Notably, there is an active application for a Class VI well in ND which took less than two years from application to approval. The below map shows an overview of which states have primacy, along with where current Class VI well applications exist, as well as all CCS projects BTU Analytics tracks in the US.

Ultimately, Class VI wells will be needed to claim the 45Q credit for sequestering CO2. If an entity wishes to claim the 45Q credit for Enhanced Oil Recovery (EOR), either a Class VI well will be needed or existing Class II wells will need to undergo a Monitoring, Reporting and Verification (MRV) Plan through the EPA, which BTU Analytics will discuss in future Insights. Given the majority of announced projects in the US have stated an intent to sequester the CO2, as opposed to using it for EOR, Class VI permitting will be required and thus create additional hurdles for projects, particularly in states that do not have primacy over the application process. BTU Analytics expects to see more Class VI primacy applications from states with robust oil and gas economies where CCS projects will be advantageous, such as NM, UT, OK, and OH.