Green hydrogen has the potential to lower emissions across various sectors, including ammonia and methanol production, oil refining, transportation, and power generation. To be considered ‘green’, hydrogen must be produced using an electrolyzer that is powered by renewable energy. Electrolyzers take water as an input and use electricity to split the water into oxygen and hydrogen. Therefore, green hydrogen production requires access to renewable energy and water. However, water may prove to be a scarce resource for green hydrogen production in certain regions due to large swaths of the country experiencing some level of prolonged drought, some even since 2000. In today’s Energy Market Insight, we’ll consider the potential impacts proposed green hydrogen projects could have on water usage.

The map below shows county drought scores for 2021. Scoring is based on drought severity, the percentage area in drought, and the population density of each county. As expected, much of the western US is facing intense and pervasive drought conditions, which happens to also be the location of a small number of proposed green hydrogen projects. 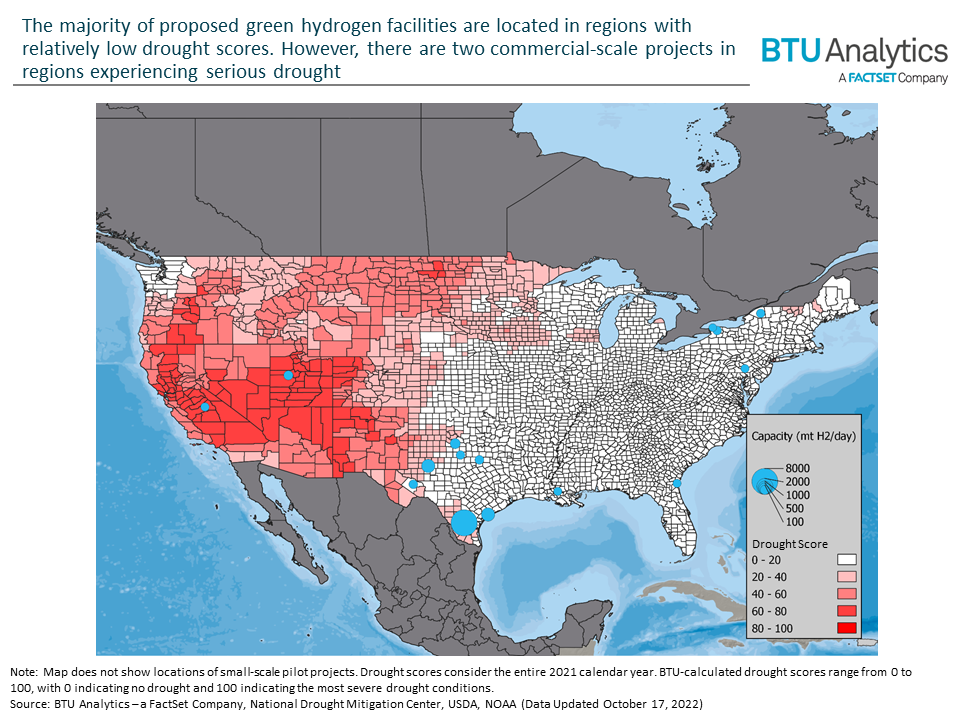 Although most of the project locations do not appear threatened by drought conditions, there are two facilities that fall in the middle of severe drought territory in California and Utah. We’ll focus on the specifics of these two projects and how they may impact local drought conditions through water usage.

In California, the Heartland Hydrogen Project intends to provide 30 tonnes of green hydrogen per day as a price-competitive fuel. This project involves building out a new 300 MW solar farm, which will power a 120 MW electrolyzer that will require around 79,000 gallons of water per day at full capacity. This is the equivalent daily water usage of around 600 people, assuming the county residents maintain their 2021 per capita average water usage of 129 gallons per day. However, rather than tapping into residential water sources, the facility plans to source all its water from a new wastewater treatment plant. Additionally, this treatment plant will also have the capacity to provide up to 160,000 gallons of recycled water per day to the surrounding community. In short, this project is not expected to be affected by drought conditions in the near term.

Moving on to Utah, the Intermountain Power Project Renewed (IPPR) involves transforming the existing Intermountain Power Project (IPP) into a green hydrogen production, storage, and utilization hub. This will include replacing coal-fueled power plant units at IPP with two natural gas combined-cycle (NGCC) generation units, which will initially run on a blend of natural gas and 30% hydrogen in 2025 and transition to 100% hydrogen by 2045. Thermoelectric power plants use substantial amounts of water for cooling processes, with coal plants accounting for higher amounts of water usage when compared to NGCC units.

By switching to NGCC power generation, the IPPR should dramatically decrease its annual water usage. However, the production of green hydrogen at the site will offset this decrease. The plot below shows the net annual water savings for various percentage hydrogen blends at the IPPR compared to the maximum amount of water that would be saved if the IPP were converted to a comparable NGCC plant without hydrogen production.

The figure above shows that the full range of hydrogen blends result in significant reductions in water use for the IPPR. However, these estimates assume a constant volume of overall gas supply to the NGCC units. Since hydrogen has a lower energy content than natural gas per volume, the IPPR will have to consider how higher hydrogen blends will impact the plant’s capacity.

Ultimately, the California and Utah green hydrogen projects do not seem hindered by drought in the short-term since they plan to either produce their own water or decrease overall water usage. However, changes in drought conditions, electrolyzer efficiencies, and/or water reallocation over time may impact the location of green hydrogen projects in the future, especially ones not using recycled water or converting from coal to gas powered generation.

To be one of the first to see new BTU data products and research around the Energy Transition, send an email to info@btuanalytics.com with “Energy Transition” in the subject line.