Last November, NERC warned that large portions of the North American power grid are at risk of insufficient supply during peak winter conditions. A little over a month later, millions of retail electric customers were forced to endure outages as Winter Storm Elliot, a bomb cyclone that enveloped much of the continental U.S. east of the Rockies in freezing temperatures and blizzard conditions, tested the grid. While many service interruptions were related to local weather impacts on distribution infrastructure, in the aftermath of the storm, FERC and NERC opened a joint inquiry into operations of the bulk power system to determine what caused outages for so many. While the results of this investigation are still pending, BTU Analytics notes that unique generation and load characteristics across different U.S. regions add nuance to the story. Today’s Energy Market Insight will briefly examine the effects of the recent storm on power generation and load dynamics across power markets in the Eastern United States.

Early on the morning of December 23, a wall of frigid air advanced eastward to the Atlantic coast and caused a sudden spike in natural gas heating demand across major population centers, particularly those in the Northeast. This surge in regional demand met well-worn constraints in supply, causing gas prices to rapidly rise from Transco Zone 5 in North Carolina all the way to the Algonquin Citygate in Massachusetts. As BTU Analytics has previously discussed, meeting electricity demand during a period of high natural gas pricing (reflecting a scarcity of supply) often forces a shift in power production away from natural gas-fired plants to alternative sources of generation as gas is diverted into home furnaces for heating rather than combustion turbines for power. 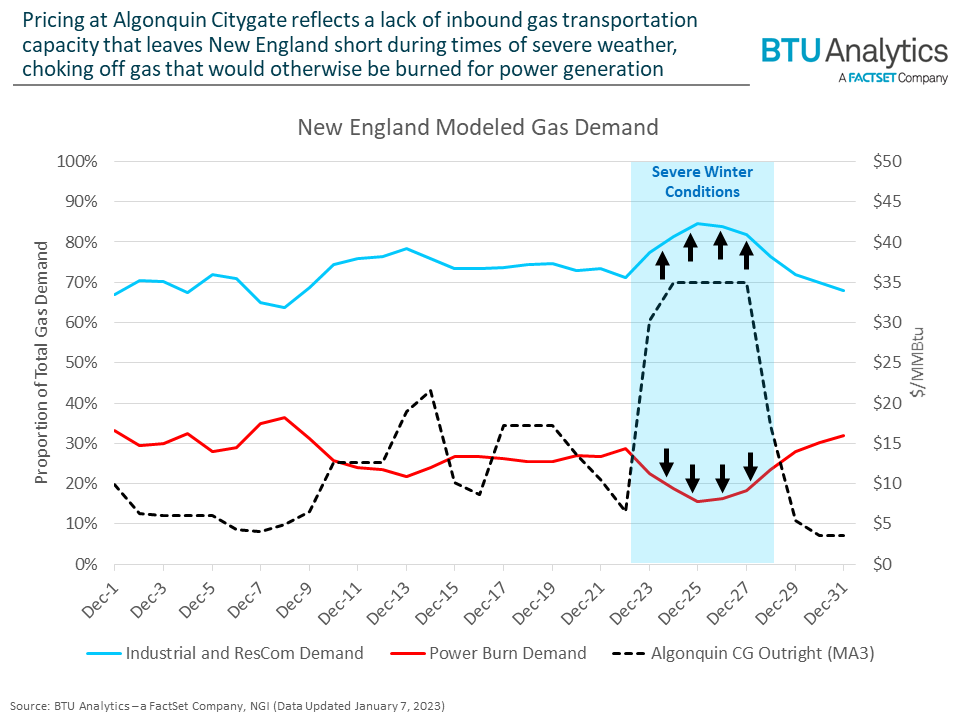 This substitution effect was especially noteworthy in New England last month. Despite ordinary levels of electrical load during the storm, during the peak of displacement on December 24, 41% of all ISO New England (ISO-NE) power generation was sourced from fuel oil, or nearly 6 GW of the total generation stack. Such a large shift in the fuel mix away from natural gas immediately resulted in an enormous increase in power sector emissions, as the overall carbon intensity of ISO-NE generation rose over fourfold across the span of just two days, from 0.28 to 1.14 metric tons of CO2 per MWh. 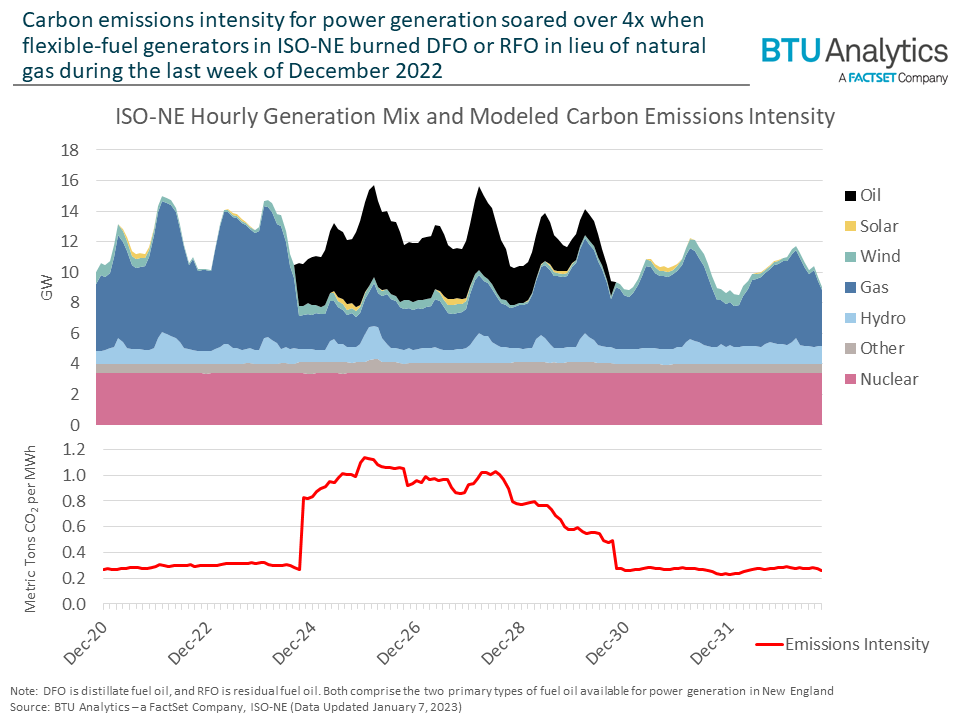 A different dynamic played out further south for regulated utilities Duke Energy and the Tennessee Valley Authority (TVA). Unlike households in New England, which remain primarily dependent on natural gas and fuel oil for space heating, residential heating in the Atlantic states is dominated by electric heat. According to 2020 EIA survey data, 70% of households across the Carolinas and in Tennessee rely on electric heating equipment, versus only 17% in the states served by ISO-NE. When bitter cold descended into the southern United States and businesses and residences switched on their electric heaters to stay warm, a sudden and rapid ramp in electricity demand followed, pushing total load to record highs.

In a struggle to maintain adequate reserve margins amid the surge in demand, TVA and Duke ramped gas-fired power generation, which peaked at 22 GW on the morning of December 24, or nearly 120% higher than the 10.1 GW of peak generation only two days prior. Despite these efforts, reported unplanned thermal outages and a scarcity of imported power led both Duke and TVA to resort to emergency load shedding to maintain grid reliability, with TVA directing partner utilities to selectively curtail up to 10% of customer load and approximately 15% of Duke customers affected by rotating outages.

As the nation digs out after Winter Storm Elliot and reviews the events that transpired during the storm, it’s increasingly clear that severe weather events, whether frigid polar vortices or punishing summer heat waves, are a factor that grid operators will continue to contend with as they work to balance the flow of electricity across the grid. In an environment shaped by the continuing march of thermal capacity retirements and an intensifying regulatory push towards residential and industrial electrification, this balancing act is poised to become more difficult in the years ahead. 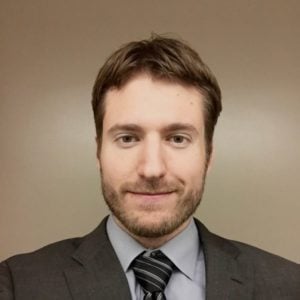 Mr. Joseph Warner is an Energy Analyst at FactSet. In this role, he focuses primarily on power market data and analysis. Prior, he worked on income tax compliance and consulting for private equity-backed upstream oil and gas entities at Moss Adams. Mr. Warner earned a B.S. in Accounting and Financial Management with a minor in Economics from the University of Colorado Denver.