I actually wanted to include the entire quote because I felt it was appropriate, but alas, I am constrained by word count (and your patience). While Dickens’ famous introduction is based on London and Paris during the French Revolution, it is also an apt description of the environment that fixed income investors face globally.

Revisiting my Fantasy Fixed Income Draft, it's easy to see why. There is either great news or alarming warnings depending on your perspective. How should one view the current state of the fixed income markets heading into 2018? Here are a few musings, broken out across the U.S., UK, and eurozone.

If we take the Chicken Little approach, we'd be likely say things like, "Easy money is over! The curve is almost inverted! Debt levels are unsustainable!" All of these have been recent attention grabbing headlines describing the U.S. market. Where are we really?

it has finally begun! To the surprise of absolutely no one, the Fed began allowing maturities to roll off the balance sheet as the first (of many) steps to normalization. As I expected, the impact has been minimal. We see additional flattening across the yield curve, however I attribute this to the incremental increases in the Fed Funds rate and institutional investors (primarily in the insurance and pension space) piling into duration as the Fed remains true to its word of lower for longer.

Apparently dreams do come true (even if they are not mine), as the TCJA was passed along party lines. How this injection of fiscal liquidity will resonate is still unclear, however my opinion is that it is a better time to be a shareholder than someone hoping for major capex. The dollar has been marginally weaker against the Euro and Sterling and marginally stronger against the Yen since passage. FX markets seem to be driven by politics over fundamentals at this point; it may be a time to hedge out currency risk rather than try to catch a falling knife.

To borrow this phrase from Michele Wucker, midterm elections now become the “grey rhino” in the U.S. fixed income market. With a contentious slate sure to unfold, this may actually be a good thing for investors as Congress shifts attention from “governing.” Assuming that we have now seen the bulk of legislative activity pre-midterms, it becomes a bit of a muddle through market for fixed income investors in the U.S.

Who needs a new Netflix original when real life is this interesting? The UK has agreed in principle on the Brexit divorce bill (somewhere in the neighborhood of $50 billion), but can’t seem to get out of its own way when it comes to handling the break in terms of the Irish border or regulatory front. With the clock ticking and less than 15 months to go until the self-imposed March 2019 exit date, the outlook is as clear as the Thames.

What we can definitively say is that the yield curve is flattening in the UK too. Consumption is down broadly, as is consumer confidence and the consensus outlook for GDP growth. With inflation running hot in a weakening macroeconomic environment with an uncertain future state (like a safari of Grey Rhinos), the BOE will need to tread carefully, especially as any search for fiscal policy assistance will most likely go wanting.

The Running of the Bulls

There's justification here for a The Sun Also Rises quote, because who doesn’t love a little Hemingway prose mixed in with their fixed income analysis, but I didn't want to go to the literary well too many times to start the year. In contrast to the U.S. and UK (aging bull and lame duck, respectively), the eurozone has shrugged off elections, coalitions, and referendums to emerge as an attractive bull market that has room to run.

GDP estimates, a stronger employment picture (structural differences aside), and reduced systemic risk in the peripheral countries (though bad debt on Italian bank balance sheets remains a concern) all point to continued strength across the continent. 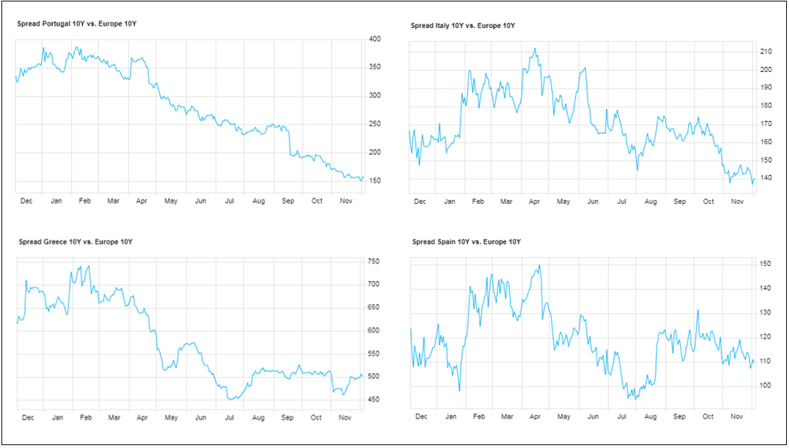 The risk as I see it is the potential for the ECB to taper too quickly in response to rising inflation. Remember, this is an entity that got the whole QE/stimulus bit very wrong the first time around (the aforementioned “winter of despair”), so the hope that they get it right on the exit comes with a giant grain of salt. I think that the first step should be moving away from ZIRP slowly while maintaining QE. Nearly € 700 billion of the ICE BAML EMU Corporate Index is yields under 25 bps or is at negative yields. How does that make any sense for risk assets? That's a different article, but stay tuned.

Maintaining this glacial pace of normalization should allow for an exit similar to the U.S. The big question is will the underlying member states tolerate inflation running above trend (I think they will, so long as real growth also continues on a positive slope).

So Where Do Fixed Income Investors Look?

I actually think this question is easy to answer, at least right now.

European and U.S. investors can afford to go a little further out on the curve with a transparent ECB and Fed. All investors can continue to play the ever expanding corporate market (expect another record year of issuance in 2018) as long as they maintain an eye on fundamentals. 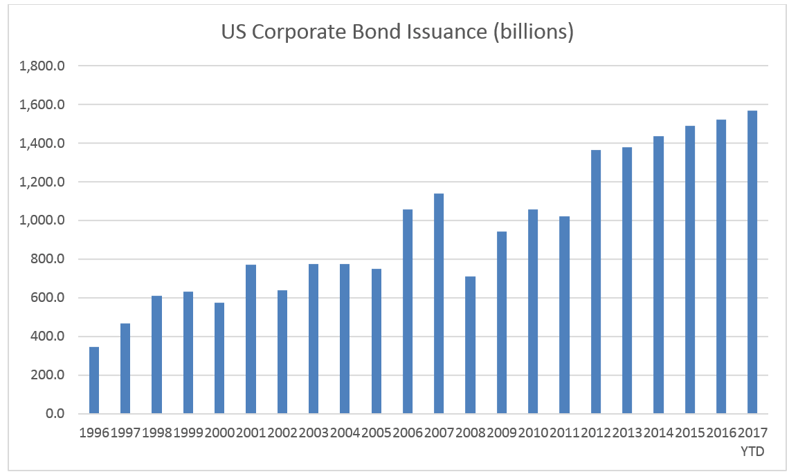 TIPS are worth a look in the U.S. and UK (depending on your macro outlook, reading the central bank tea leaves, and investment mandate). Stronger emerging markets are also worth a look for yield pickup and FX moves: China onshore, India, and Russia if you can find it. Investor may also want to monitor Brazil after the big 2017 run, while avoiding South Africa and the accompanying political risk.

With this as an initial playbook, 2018 looks to be another Goldilocks year in the fixed income world.