As we begin the second half of 2020, let’s look at the performance of the global economy so far this year and the projections for the rest of 2020 and 2021. The outlook continues to be dominated by the global spread of the COVID-19 novel coronavirus and economic toll of country lockdowns instituted around the world to stem the spread of the virus.

Both the International Monetary Fund (IMF) and the Organization for Economic Cooperation and Development (OECD) released updated forecasts in June that were considerably more pessimistic than their previous forecasts published just a few months ago. We get a clear sense of the ever-changing outlook using daily analyst consensus forecasts compiled by FactSet. In any case, there is considerable uncertainty regarding the global economic outlook for the next six to 12 months.

IMF: “A Crisis Like No Other, An Uncertain Recovery”

The IMF released an update to its World Economic Outlook in June with substantial changes to its global projections due to COVID-19. After expanding an estimated 2.9% in 2019, world GDP is expected to contract by 4.9% in 2020 and then rebound in 2021 with a 5.4% expansion. This forecast has been revised down significantly from the IMF’s projections published in April when the organization was predicting a 3% contraction in 2020.

The IMF is now projecting large economic contractions in both advanced and emerging countries. The U.S. economy is expected to shrink by 8.0% in 2020, while the Eurozone and the UK both contract by 10.2%. China’s economy is projected to grow by just 1.0% while Japan sees GDP fall by 5.8% and India’s declines by 4.5%.

The IMF is predicting that the global economy will experience its worst recession since the Great Depression, much worse than what we saw 10 years ago with the global financial crisis. The organization is particularly concerned about the potential of this crisis to reverse the “significant progress made in reducing extreme poverty in the world since the 1990s.” In its report, the IMF stresses the need for strong multilateral cooperation on several fronts, including liquidity assistance, climate change mitigation, and support for various health and relief initiatives.

OECD: “The World Economy on a Tightrope”

The OECD’s June Economic Outlook forecast is significantly more pessimistic than the forecast published in March. In fact, the OECD published two alternative economic forecasts in June and it gives each of them equal probability. The double-hit scenario assumes that a second COVID-19 outbreak hits all economies towards the end of this year, while the single-hit scenario avoids a second outbreak.

In the slightly less pessimistic single-hit scenario, the OECD projects that global GDP will shrink by 6% in 2020, followed by a 5.2% rebound in 2021. The U.S. economy is expected to go from a 2.3% expansion in 2019 to a 7.3% contraction in 2020 followed by a 4.1% rebound in 2021. We see even larger downturns in other advanced economies with the Eurozone contracting by 9.1% this year and the UK by 11.5%. Even China and India, previously the engines of growth for Asia, are projected to see their economies shrink this year according to the OECD.

Whichever scenario prevails, the OECD expects the current deep recession to be followed by a slow recovery. In addition, the organization stresses that, “The disruption resulting from the pandemic is likely to leave long-lasting scars in many economies.”

Data released in the last few weeks showed preliminary readings of second quarter GDP growth for the U.S. and the Eurozone that were largely in line with expectations. The U.S. economy shrank by 32.9% (annualized q/q), while the Eurozone saw a 12.1% q/q decline compared with the first quarter, Germany’s GDP fell 10.1%, and France’s fell by 13.8%. Note that the European growth rates are not annualized.

Over the last six months, FactSet’s economic estimate consensus numbers have provided insights into the rapidly deteriorating global outlook. These estimates have continued to reflect worsening analyst projections since the end of February.

The median forecast of analysts surveyed by FactSet now projects that U.S. real GDP will decline by 5.2% in 2020, the Eurozone will fall by 8.0%, and the UK will shrink by 9.1%. China’s economy is expected to expand, but only by 1.5%. These forecasts currently show robust economic recoveries in 2021. However, resurgences of the virus around the globe cast doubt on the likelihood of the v-shaped recovery for which many were hoping. A slower-than-expected economic recovery in the second half of 2020 would negatively impact 2020 annual growth rates and hinder the economic recovery expected in 2021. 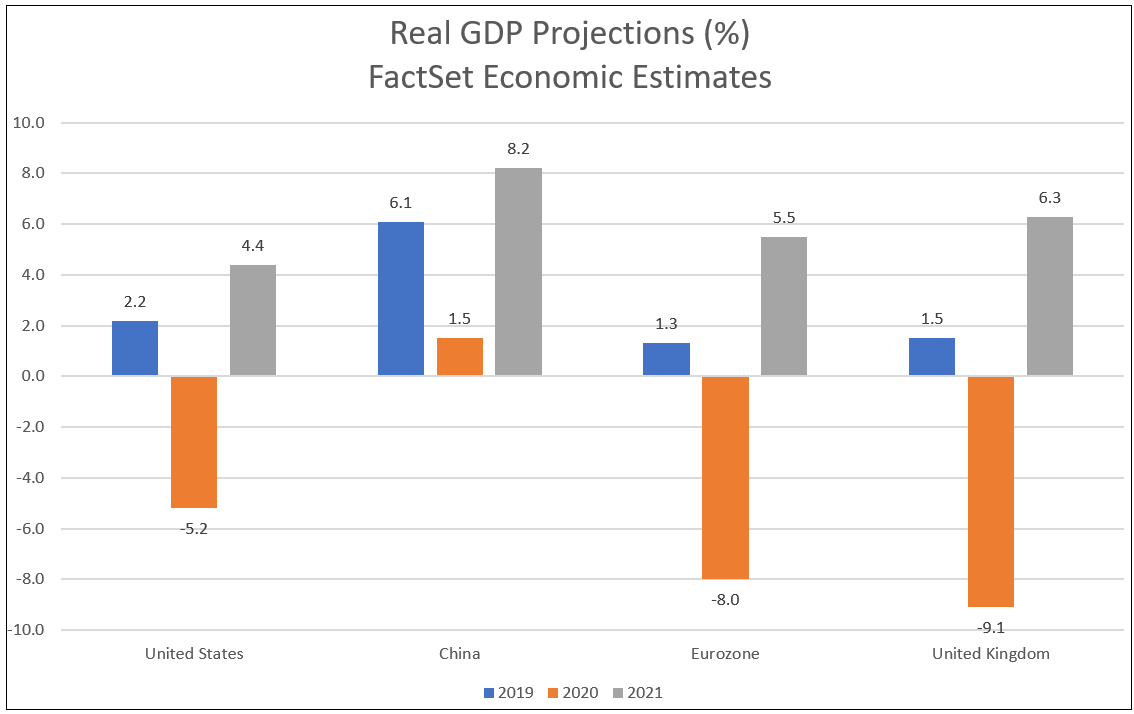 Production and supply chain disruptions are leading to increased price pressures starting with raw materials and flowing all the...

The surge in housing demand in the U.S. is driving up the prices of existing homes as well as construction materials for new...