Analysts’ Dire Predictions for Fallen Angels Failed to Materialize in 2020

There has been a lot of interest around "Fallen Angels" in the fixed-income markets over this past year, specifically revolving around the expected increase in downgrades stemming from the effects of the COVID-19 pandemic. Fallen angels are issuers whose credit rating has been downgraded from BBB-/Baa3 to BB+/Ba1, which is significant because this is the threshold between investment-grade debt (which has a much larger buyer pool) and junk/high-yield debt. Additionally, this type of downgrade often forces passive investment-grade managers to immediately sell out of their positions in accordance with their fund’s stated investment objectives and tends to present a buying opportunity for active fund managers.

When COVID-19 first struck the U.S., analysts estimated that up to $400 billion of corporate debt could be downgraded to junk status. To date, these estimates seem to have been significantly overestimated as the current downgrade pool is just over $240 billion. This leaves many investors wondering: were those estimates overzealous or is the worst yet to come?

In order to analyze the question above, it’s important to first understand where the credit markets stood leading up to the outbreak of COVID-19. From 2016 to 2019, the credit markets in general appeared to be stable, with the exception of some volatility in the repo markets in the fall of 2019. During this time, yields and spreads remained relatively low, which often put pressure on managers to extend duration and/or drop the credit quality of their investments in the search of greater yield. 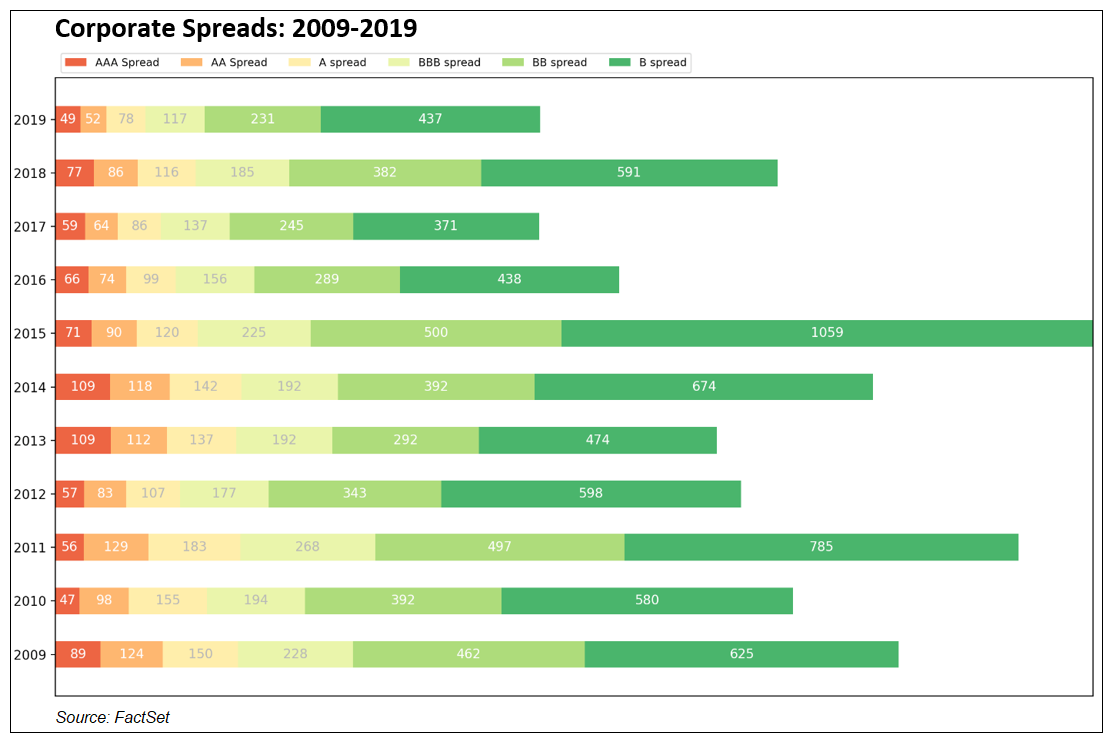 As soon as the coronavirus surfaced in the U.S. in March 2020, it immediately began to wreak havoc on the markets. Equity prices plummeted 30-40% on average and oil prices were in free fall. Selling pressure mounted in the credit markets with bond outflows dramatically increasing. Simultaneously, dealers began to refuse to purchase more debt, citing limited capacity on their balance sheets. This was the beginning of a liquidity crisis as the credit markets became gridlocked with bond issuances stopping all together and spreads blowing out drastically across the board. 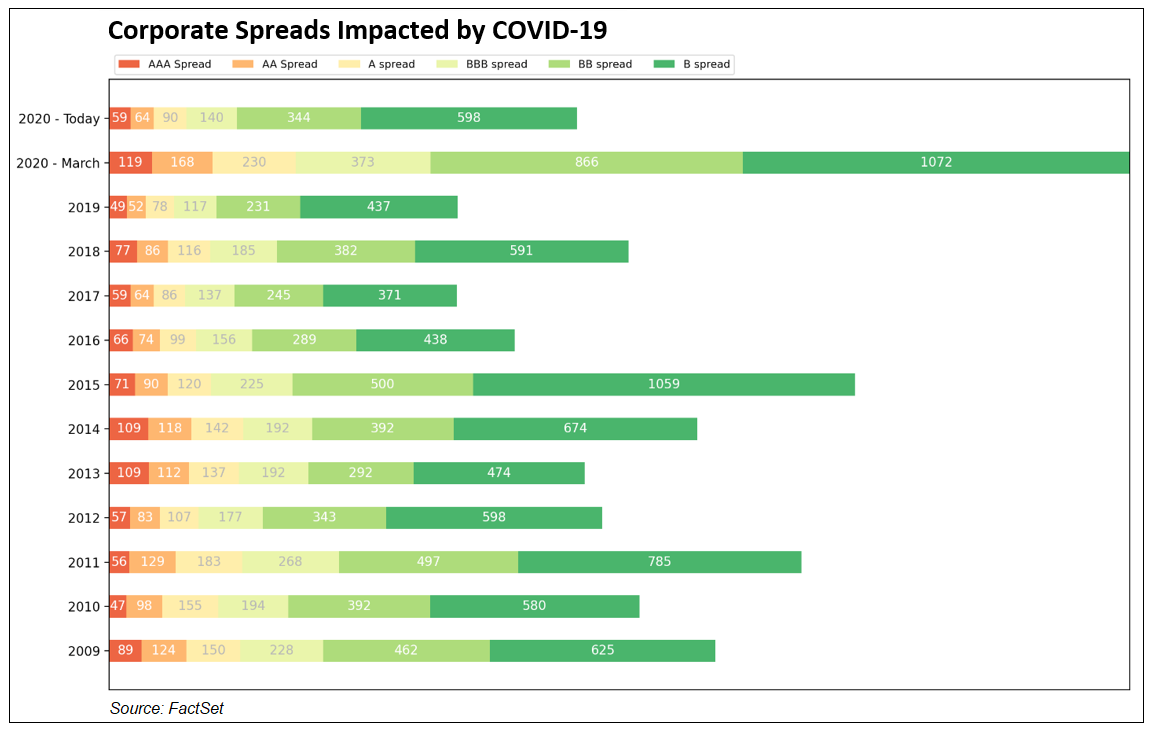 The U.S. Federal Reserve quickly intervened, offering two distinct solutions. The first solution involved cutting interest rates to near zero to allow borrowers access to cheap credit. Between January and March, the FOMC cut rates across the board by approximately 100 basis points with the shorter end of the curve being cut up to 150 basis points. 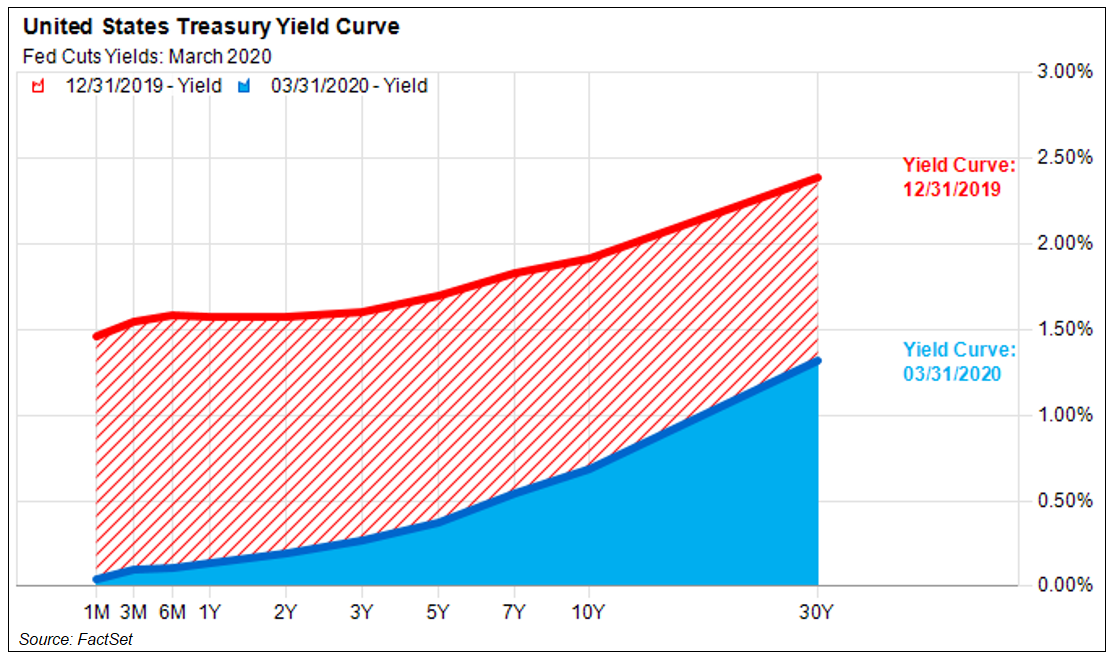 In addition, the Fed also syndicated new credit and liquidity facilities to provide an additional supply of liquidity to the credit markets and increase the demand for debt securities. These facilities were created with a $10 billion investment from the U.S. Department of the Treasury and had the ability to be levered 10 times to create a $100 billion-backed organization with the sole purpose of purchasing corporate bonds. Originally, these facilities were only allowed to purchase investment-grade debt, but as the number of fallen angels increased sharply between March and April (Figure 4), the Fed extended the program to include recent fallen angels (now encompassing AAA-BB rated debt securities). Concurrently, the Treasury decided to increase its initial equity investment from $10 billion to $25 billion, casting a much wider safety net for the credit markets and bringing the total pool of purchasing power to $250 billion. 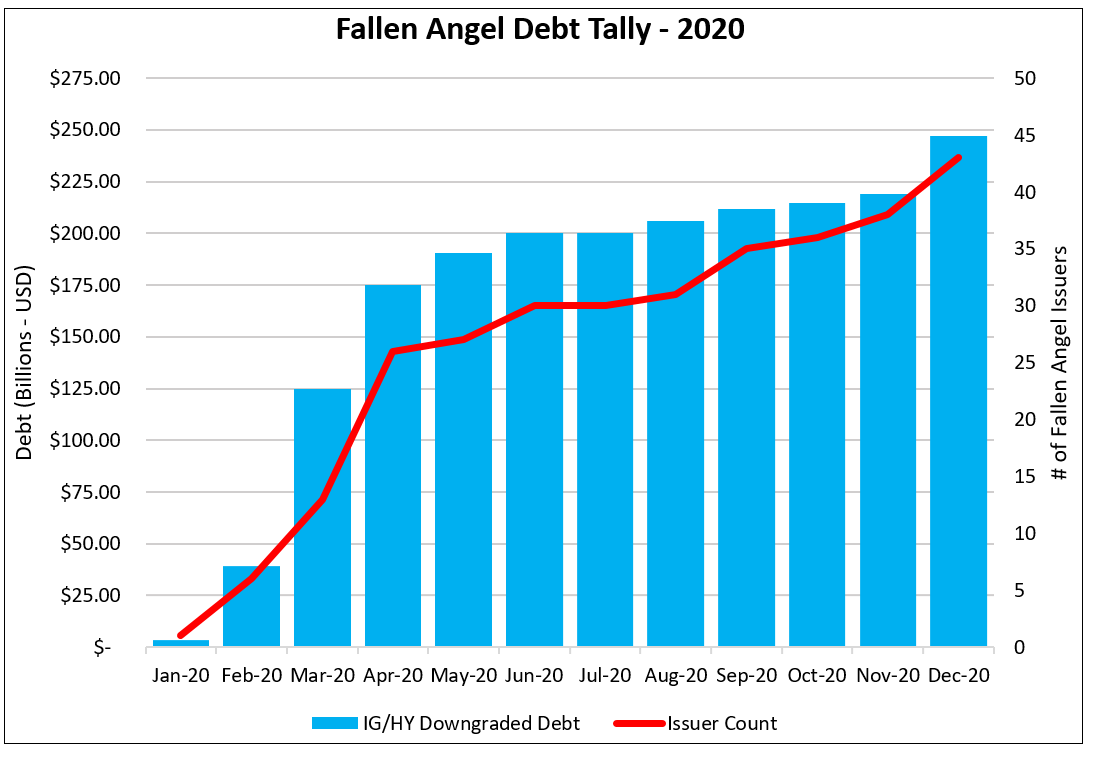 This was a bold move by the Fed, and one the American economy drastically needed. Once these credit facilities were established, the liquidity crisis began to dissipate, and the credit markets became fluid again.

When All Is Said and Done

In the months following the Fed’s intervention, the credit markets became more stable as the month-over-month downgrades fell drastically. From March to June, there was over $160 billion of corporate debt whose 24 issuers had just become fallen angels. To put this in context, this three-month period saw more fallen angels than the past three years combined.

With yields still next to nothing and an unclear road ahead, many companies decided to issue new debt, seeing cash on hand as a potential way to weather the storm. From this point on, bond issuances skyrocketed as companies began hoarding cash in record amounts which, in turn, caused leverage ratios to reach all-time highs. (Figure 5) 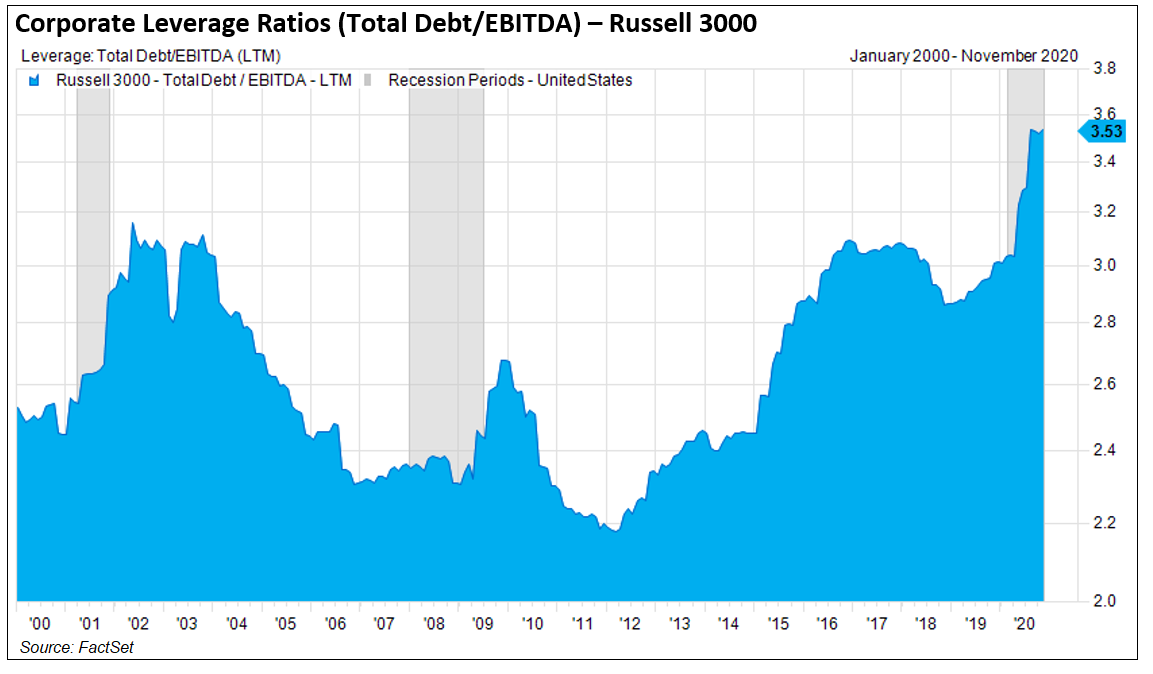 While the tally of fallen angels has slowed significantly since the start of the pandemic, over the course of 2020, we saw roughly $240 billion in fallen angel debt. This puts us about 40% short of analyst’s expectations. Even if there is an uptick in downgrades, the Fed will likely re-institute the same credit facilities used last year that ended with over $238 billion in remaining purchasing capacity. Additionally, the Fed has promised to keep interest rates low for the next few years.

There are some concerns that the Fed’s actions have given many a false sense of security that the Fed will always bail them out, fueling corporate leverage across the board. Although this peak in leverage has been exacerbated by the pandemic, it’s important to remember that this trend of increasing leverage isn’t exactly new. FactSet’s Olivier Verburg discussed this in two Insight articles from 2018 and 2020, where he found that over the past decade the total amount of corporate debt outstanding had risen nearly 230%. Eventually, this borrowed money will either need to be paid back or refinanced at a significantly higher rate that could cause substantial issues for these companies in the future. Additionally, with interest rates already near zero, the central bank may be forced to turn toward a policy of quantitative easing in order to fix any headwinds in the near future and that can have its own ramifications.

Mr. Brian Strang is a consultant at FactSet in the San Francisco office. In this role, he works closely with a wide variety of different institutional asset managers and has a niche focus on fixed-income clientele. He joined FactSet in 2018 and prior worked as a Venture Capital Intern for the Willamette Angel's W2 Fund and served as a Senior Analyst and Alumni Fund Portfolio Manager for the University of Oregon Investment Group (UOIG). Mr. Strang earned a bachelor’s degree in Business Finance from the University of Oregon and is currently a CFA Level II candidate.

Future of Fitness: Online or In-Person?

While the future of traditional gyms remains unclear, we see that fitness habits and gym memberships are evolving.

Looking at short-selling trends over time provides insight into overall market sentiment as well as the strength of bearish...

By Ihor Dusaniwsky  |  Companies and Markets

High levels of liquidity and a high demand for growth at any cost drive up the valuations in growth-oriented companies and...

By Justin Lowry  |  Companies and Markets