Are Golden and Death Crosses a Good Bet?

There is a lot of debate surrounding the validity of technical analysis, but for many, it is an important tool in predicting future price movements of stocks. Two well-known technical analysis tools are the golden cross and death cross. Is there any value to these technical indicators?

Each cross signals a price trend. For example, a golden cross is seen as a strong indication that a security will continue to go up in price. Conversely, a death cross is an indication that a security will continue to see its price decline. The chart below is a good example of both a golden cross and a death cross occurring for Apple between August 2008 and August 2009. 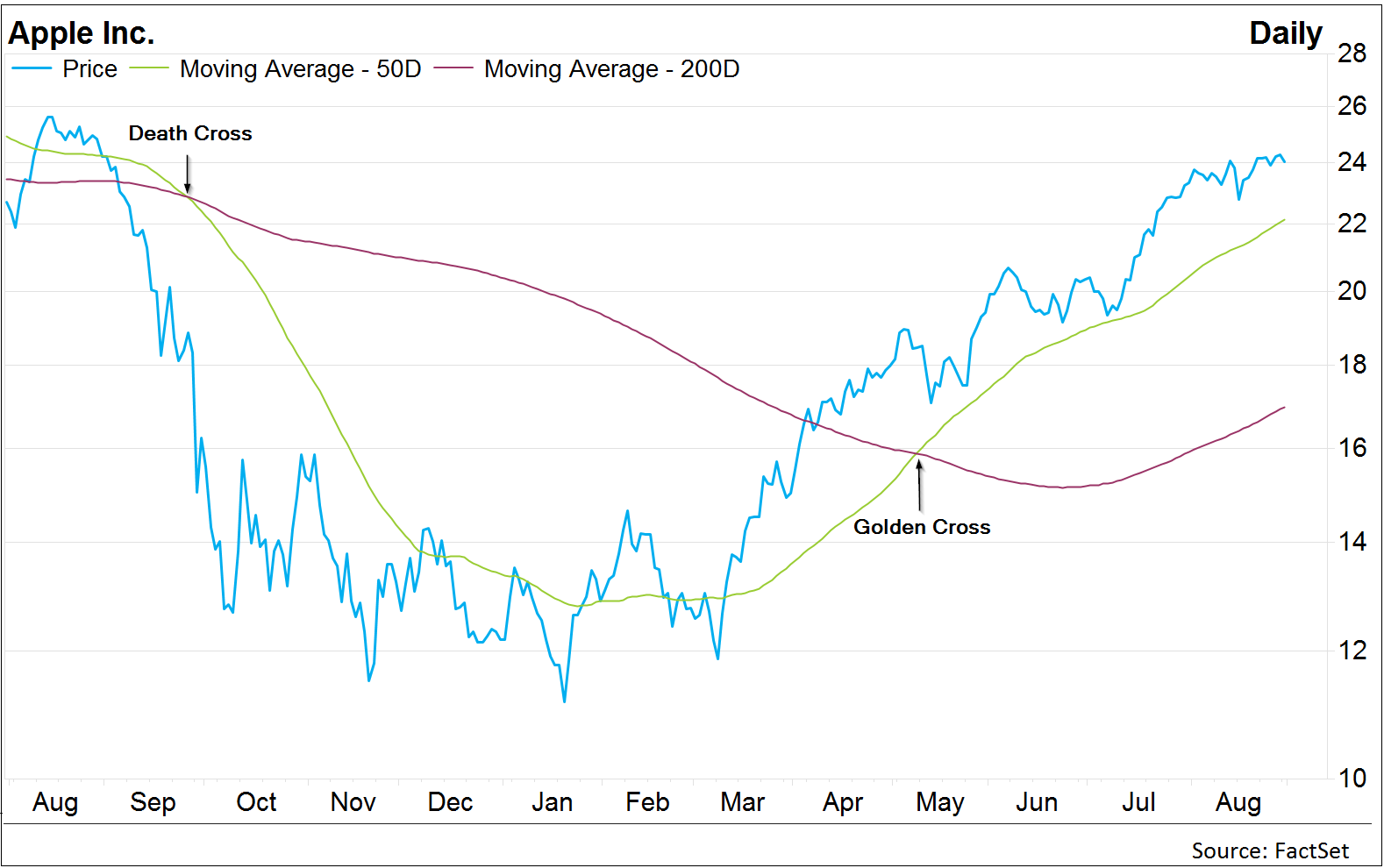 Examining Golden and Death Crosses Over the Last 20 Years

We set out to investigate whether historical returns data supports the validity of golden and death crosses across companies and sectors. Our universe included companies domiciled in the United States with a market cap of at least $300 million at the time of the cross. For these companies, we recorded all crosses between December 31, 1998 and March 31, 2018 in order to capture two recessions and two bull markets. We then tracked security performance over one-month, six-month, and one-year time horizons starting at each cross, grouping the securities into sectors. We also wanted to see how the crosses performed in the short run versus the long run, so we compared our 20-year performance data against returns from July 1, 2009 through March 31, our current bull run. 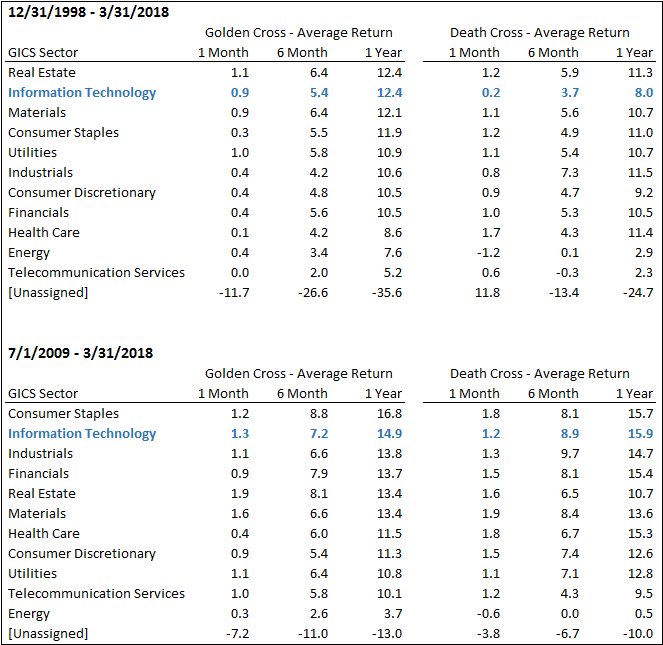 On average, for the time horizons tested, golden crosses show positive returns over the short term for most sectors. When comparing golden cross and death cross returns over the two different time horizons we see some interesting results. Our expectation of golden cross positive performance holds mostly true for our longer time horizon back to 1998. However, counterintuitively, it appears that death crosses also have positive returns and even outperform golden crosses in our current bull market. Rather than giving a signal to sell or short a stock, the death cross has been an indication to buy at a low price (and be rewarded with a stock price turnaround). 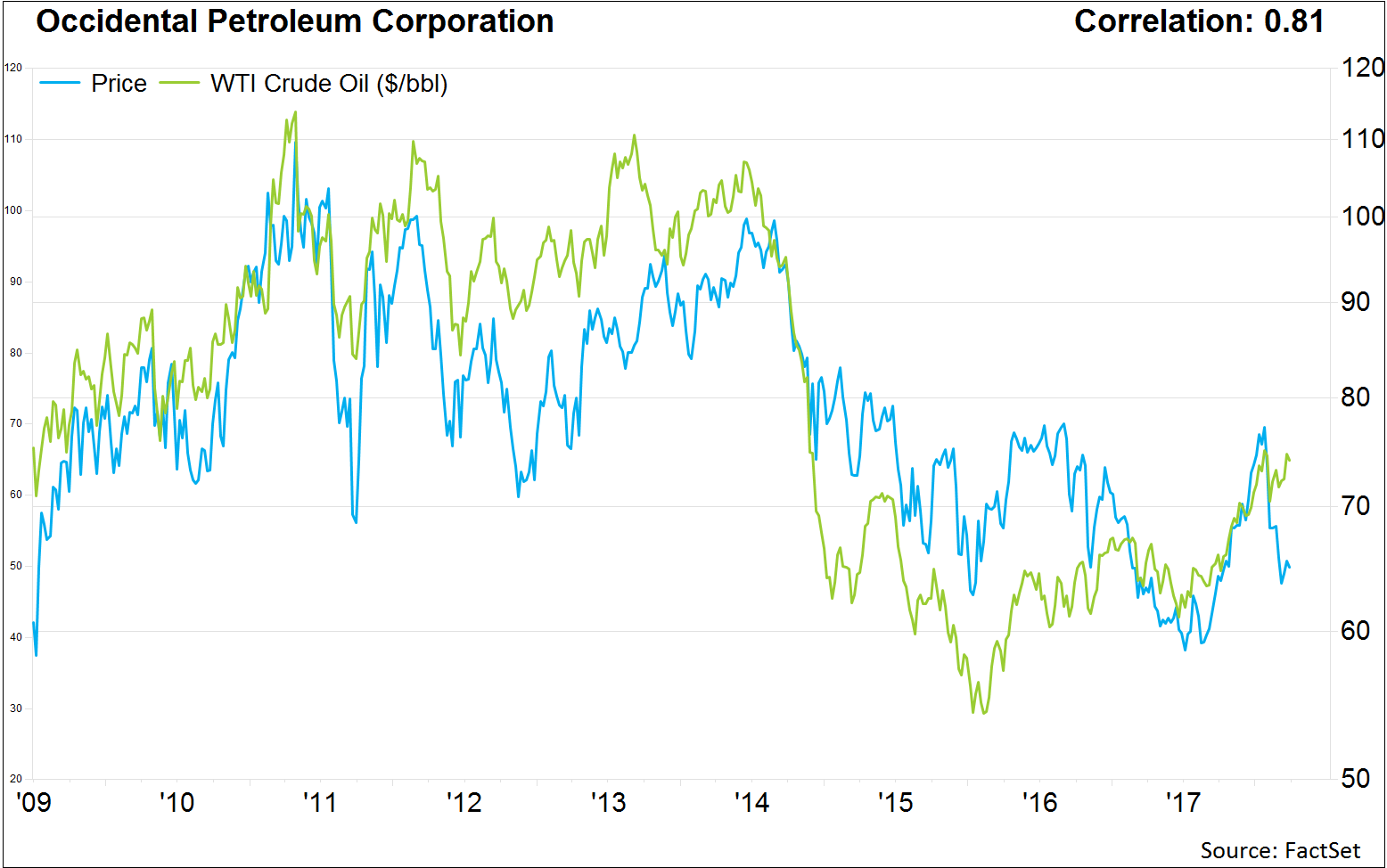 Information Technology is another interesting sector. IT’s post-cross behavior differs significantly between our 20-year time frame and the current bull market. When we look at average returns for IT stocks since July 2009, we see death cross average returns, for six-month and one-year holds, greater than that of golden cross returns. This is likely due to the strong performance of IT over the past nine years. When IT death crosses were supposed to point out negative momentum, they actually pointed out price lows, and investors who bought at these lows profited when the stocks rebounded. For our longer time frame, death crosses yielded positive returns, but the returns were lower than for the golden crosses. Note that this longer time horizon includes the 2000 dot com bubble. IT stocks took a significant hit when that bubble burst, but investors still saw positive returns for the sector as a whole.