After creating a path of destruction across the islands of the Caribbean, Hurricane Irma made landfall in the Florida Keys on September 10, 2017 as a Category 4 hurricane. Because of the size of the storm, Irma eventually covered the entire state of Florida, causing destruction on both the east and west coasts. This meant complete shutdowns of nearly all of Florida’s 15 seaports, which are vital centers of economic activity, both for tourism and international trade. Hurricanes can have dramatic impacts on a local enconomy, and with Hurricane Maria now following a similar path, assessing the full impact of the season will be critical to investors.

Any Port (Data) in a Storm

Leveraging FactSet’s security and entity relationships and proprietary concordance process, we can analyze U.S. Customs detailed shipping data, which details the shipper, carrier, consignee, manifest details, and destination and origin ports for maritime imports into the United States. With data in hand, we can undertake a preliminary analysis of the effects of Hurricane Irma on S&P 500 companies and their subsidiaries. 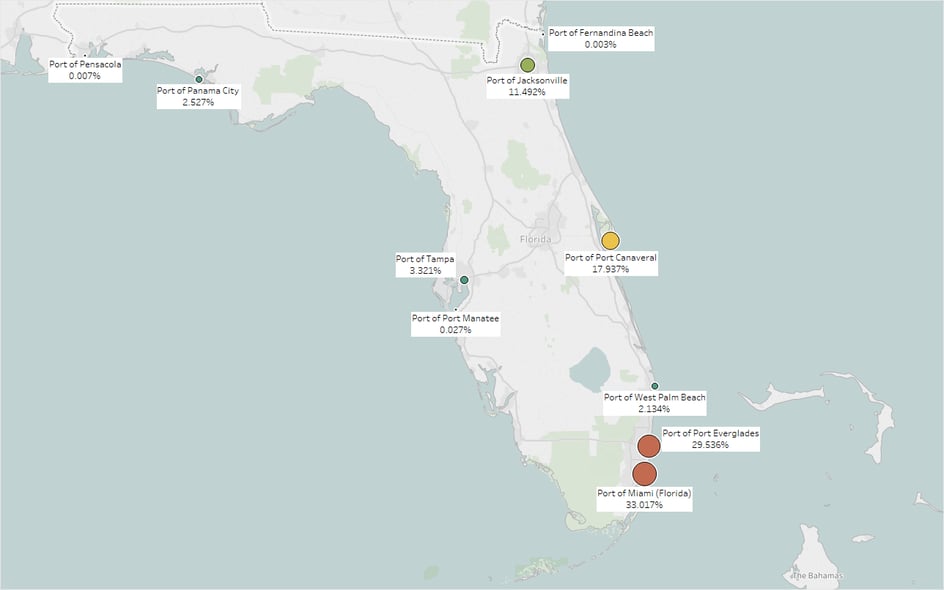 Notably, 151 companies within the S&P 500 received shipments via at least one of Florida’s top 10 ports in 2017. The highest traffic for these companies was through ports on the east coast of the Florida peninsula: Miami (33%), Everglades (30%), Canaveral (18%), and Jacksonville (11%). The three key southern ports (Miami, Everglades, and Canaveral) remained closed from September 9 until the U.S. Coast Guard allowed them to reopen on September 12. Because the Port of Miami is the largest passenger cruise home port in the world and a significant port of entry and departure for global goods, these closures had a significant impact on the business operations by the S&P companies most reliant on activity through Miami, in particular.

To understand impact on a company level, each shipment’s consignee can be rolled up into its ultimate parent, allowing an estimate of the firm’s relative exposure to Florida in aggregate. We limited our analysis to companies that had at least 200 shipments to the United States year-to-date overall and calculated the percent of these companies’ shipments that came in through Florida ports.

Not surprisingly, three of the top 10 companies with shipments coming into Florida ports are cruise lines: The Walt Disney Co., Royal Caribbean Cruises Ltd., and Carnival Corp. Food and consumer goods companies were also represented: Sysco Corp., Hanesbrands Inc., VF Corp., and Constellation Brands Inc.  Somewhat surprising was the appearance of pharmaceutical and health/medical goods companies on the list: Pfizer Inc., Stericycle Inc., and Medtronic Plc. By looking at a specific company, like Sysco, we can drill into a corporate hierarchy to identify which subsidiaries would be most impacted by disruptions at certain ports. In total, Sysco received shipments under nine separate entities with Bahamas Food Services Ltd. and Beaver Street Fisheries, Inc. serving as its primary consignees. The figure below shows the total number of shipments received in Florida.