Hurricanes Harvey and Irma caused significant property damage and business losses across the Gulf Coast region of the country in late August and early September. Since Labor Day weekend (September 5), the estimated earnings growth rate for the S&P 500 for Q3 2017 has declined by just over half a percentage point (to 4.5% from 5.1%). Have these two hurricanes contributed to the recent decline in expected earnings growth for the index?

Since September 5, estimated dollar-level earnings for the S&P 500 for the third quarter have decreased by about $1.6 billion (to $292.0 billion from $293.6 billion). The three industries in the S&P 500 that have recorded the largest declines in estimated earnings over this period have seen at least some negative impact from the hurricanes. 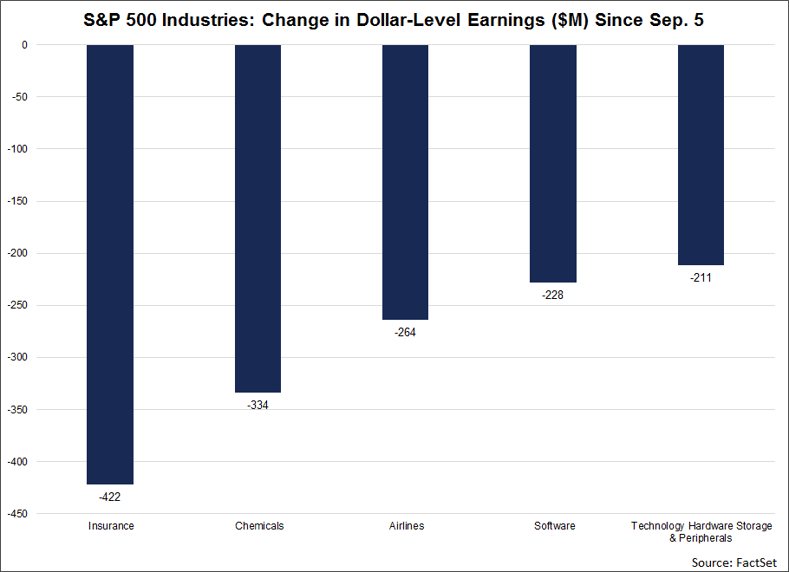 The Insurance industry has recorded the largest decline in dollar-level earnings during this time at $422 million. The Insurance industry is expected to be negatively impacted by the hurricanes due to large catastrophe losses from property damage. In this industry, Progressive Corporation (-35.2%), Traveler’s Companies (-32.4%), and Loews Corporation (-14.5%) have seen the largest decreases in mean EPS estimates for the third quarter since September 5.

The Chemicals industry has recorded the second largest decline in dollar-level earnings during this time at $334 million. Almost all of this earnings decline can be attributed to DowDuPont. On September 12, DowDuPont stated the company expected a negative impact of $250 million in operating EBITDA due to Hurricane Harvey. A number of analysts have revised EPS estimates lower for DowDuPont since September 12, citing this guidance as a factor in the downward revisions. As a result, the mean EPS estimate for the company has fallen by 22% since September 5.

The Airlines industry has recorded the third largest decline in dollar-level earnings over this period at $264 million. The hurricanes negatively affected this industry due to flight cancellations and due to the increase in fuel prices attributed to the hurricanes. In this industry, United Continental (-18.5%) has seen the largest decrease in the mean EPS estimate for the third quarter over this period.

Thus, downward revisions to earnings estimates for companies in the Insurance, Chemicals, and Airlines industries can be attributed at least in part to Hurricanes Harvey and Irma. Combined, these three industries account for $1.02 billion (or 65%) of the total $1.57 billion decrease in dollar-level earnings for the index for Q3 2017 since Labor Day.