Blockchain and artificial intelligence (AI) may sound like something out of a science fiction movie, but in reality, they are transforming the financial services industry before our eyes. But what exactly are blockchain and AI?

When we think about blockchain, many of us think about cryptocurrencies like Bitcoin and Ethereum, but that’s like saying the internet is a search engine. Stripped down to its core, blockchain is a digital record of transactions. Blockchain technology decentralizes data storage so that the data is not owned or managed by one governing body.

When we think about artificial intelligence, perhaps we imagine the Terminator movies and intelligent robots with human-like behaviors. In practice, AI uses computer systems to perform tasks that ordinarily require human intelligence, like making predictions. Machine learning is a subset of AI that uses computational and statistical techniques that allow computer systems to use data to “learn” how to perform a task.

Both AI and blockchain are changing the financial industry landscape. AI can process data exponentially faster than humans can. It allows financial institutions to leverage vast amounts of data to extract more insights, automate repetitive tasks, and accelerate innovation.

Blockchain is also disrupting the financial industry with more transparency and access to financial markets through decentralized finance (DeFi) and smart contracts. As more Decentralized Autonomous Organizations (DAOs) are launched, the more we will be forced the rethink the existing centralized financial systems.

What do blockchain and AI have in common? Not much, actually. They are both leading today’s innovation and technology trends and have many use cases, but otherwise, blockchain and AI act entirely differently. Blockchain acts as secure storage and is decentralized, tamperproof, and transparent. AI, on the other hand, is the processer of massive amounts of data and is typically centralized, fast-evolving, and opaque. 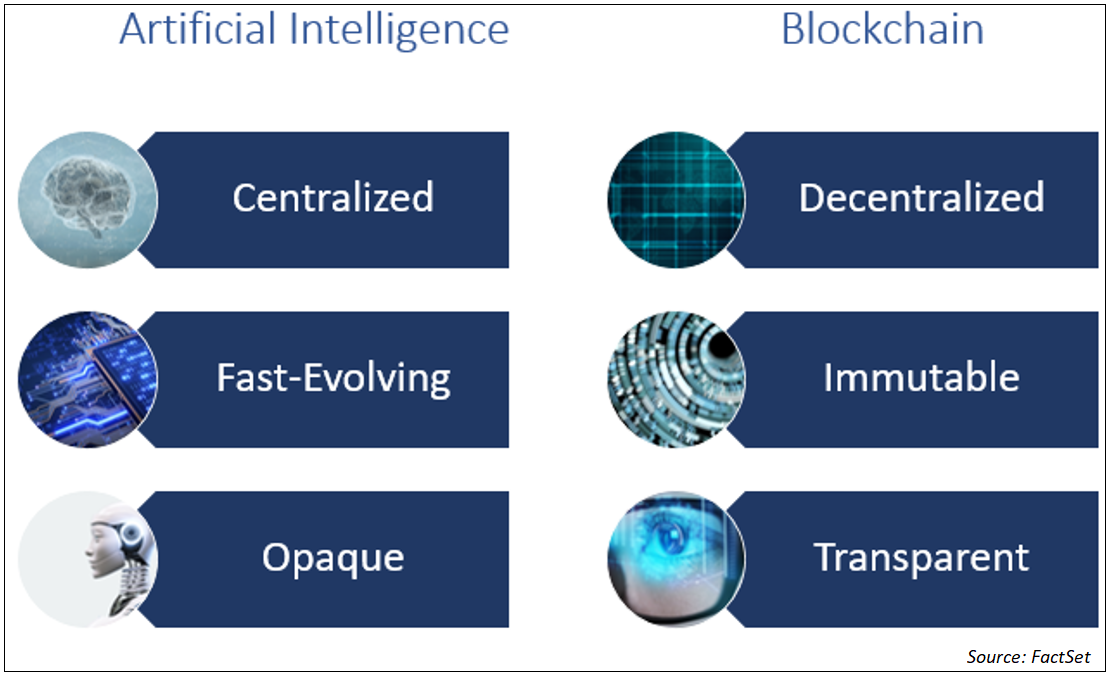 One of the struggles AI faces is accountability, which surfaces mistrust in the outputs from AI. The European Commission proposed a set of regulations where trustworthiness is at its core, and to trust AI, we must be able to explain how the AI algorithms work for humans to understand it and have confidence in the accuracy of AI outputs and results.

Blockchain’s immutable digital records may be a way to offer insights into AI’s framework and model to address the challenge of transparency and data integrity.

Blockchain’s immutable digital records may be a way to offer insights into AI’s framework and model to address the challenge of transparency and data integrity. Using blockchain can also enhance data security and integrity by storing and distributing AI with a built-in audit trail in the blockchain. Having this audit trail ensures that the data being used to train models along with the models themselves keep their integrity.

Another example of establishing trust in AI using blockchain goes back to the foundations of blockchain. AI technology is typically centralized, resulting in mistrust from users. Today, many people do not trust what government and large companies do with their data. The challenge is being able to provide assurance to users that technology hasn’t crossed the line and infringed on privacy.

Enter blockchain: a decentralized data storage that can act as an audit trail and provide that trust to the users to show them exactly how companies and other centralized organizations use their data. Furthermore, blockchain ledgers can be used as a digital management system for data rights so that individuals can own their data and provide the terms and conditions under which companies and organizations are allowed to use their data.

Automation is not a new concept to AI, but combining AI and blockchain can allow for synergies in both scale and efficiency. Blockchain technology can remove unnecessary third parties from multiparty transactions, ultimately accelerating the speed of transactions and increasing efficiencies across transactions. Reducing the friction between these transactions empowers individuals to own their data and blockchain ensures the security of the transaction process.

Combining AI and blockchain can allow for synergies in both scale and efficiency.

For example, blockchain technology enables us to build decentralized exchanges where exchanging assets doesn’t need to rely on a central authority or third party to approve the exchange. All transactions are recorded on the blockchain and the exchanges are written to the blockchain directly. This kind of order book eliminates the need for a central authority due to its open-source nature and transparency of transactions that anyone can audit.

AI can provide the scale and automate processes for evaluating transactions. With the amount of data exponentially increasing, processing and consuming data without the help of AI will become impossible.

When blockchain is involved, the secure transaction can’t be tampered with, and it ensures that every transaction that is written conforms to the rules predefined by the blockchain (either programmed into the platform or added as smart contracts). The security of the blockchain can aid in reducing the possibility of fraudulent transactions and enhance fraud detection. Layering AI on top of transactions can detect anomalies in the blockchain at a large scale. Fraud detection involves sifting through massive amounts of data looking for unusual patterns.

Layering AI on top of transactions can detect anomalies in the blockchain at a large scale.

For example, if a client has an account that invests the same amount in an ETF every month, and suddenly one month, the amount the client invests is 10 times the normal amount, this transaction would be classified as suspicious and potentially fraudulent. This would trigger fraud detection algorithms at the banks. AI and blockchain technology can be combined to detect suspicious transactions and activity and stop it at the source.

Smart Contracts: The Fall and Rise of the DAO

The first DAO launched in 2016 as a form of investor-directed venture capital fund. It launched after a crowdfunding campaign via a token sale and quickly became one of the largest crowdfunding campaigns in history. The goal was to provide a new decentralized business model built on the Ethereum blockchain with open-source code. The DAO’s financial transactions and rules would be encoded on a blockchain to remove the need for a central governing authority, which in theory should reduce costs and provide more control and access to the investors.

The first DAO ultimately failed because hackers exploited a security vulnerability loophole in the code that transferred a third of the Ether into a separate account under the DAO smart contract. Smart contracts are programs stored in the blockchain and executed when predetermined conditions are met, generally used to execute an agreement without the need of an intermediary.

The problem with DAO was its inability to react quickly to unanticipated circumstances. On top of this, the United States Securities and Exchange Commission (SEC) ruled that tokens offered by the DAO were securities and subject to federal securities law. This meant that the DAO was subject to the same regulations as all other centrally governed organizations.

Today, billions of dollars are in smart contracts across the Ethereum ecosystem (the top three projects alone hold over $26 billion). The failure of the first DAO paved the way for improvements in the design and security of smart contracts and a healthier ecosystem. Now smart contracts can be changed and voted on by the community/DAO, and smart contracts emerged as one of the most efficient and effective data management solutions. Adding AI on top of this can help overcome data management challenges including automation. For example, AI models could be built into smart contracts executed on a blockchain, and the AI model could make recommendations based on the data in the contract, whether it’s a due date, payments, or even finding the most efficient shipping routes.

What does this mean for FinTech?

FinTech as we know it now is highly specialized and centralized. Blockchain and AI can be catalysts for FinTech 2.0 focusing on holistic solutions with increased transaction speeds, transparency, and security. Furthermore, DeFi may mean a larger pool of investors as more and more people gain access to financial markets. The more investors there are, the more data there will be that would be impossible to process without AI. Blockchain provides the foundation for smart contracts to improve transparency and data management, while AI may be leveraged to scale processes, accelerate transactions, and extract insights from large volumes of data. AI and blockchain may not completely overhaul the financial industry as we know it, but they will most definitely change how we interact with financial data.