There are three ways that investors can value a fixed income ETF portfolio: Net Asset Value (NAV), the value of the fund’s underlying index, and the market price. Recently, all three have been hobbled, leaving us with no consistently reliable metric. In today’s crisis environment, market price is the least bad choice of the three. However, during the current market stress, authorized participants’ (AP) transaction costs are coming into play, weighing on the market price. As a result, the market price of highly liquid ETFs is not necessarily reflective of the market’s best estimate of the portfolio value.

ETF aficionados are accustomed to seeing fixed income ETF NAVs and underlying index values lag the market price in a bond market dislocation. We know to rely on market price for valuation, especially for highly-liquid ETFs. But we have been utterly unprepared for market prices of identical funds decoupling.

NAV and the underlying index both rely on bond-pricing services to value each constituent. The services’ models require bond transaction data as inputs. But many bonds trade infrequently during normal times. These are not normal times, especially in the corporate markets where spreads have widened to 8-10%; NAV and index values lag badly.

At the same time, the market price is not bound to models. It updates with every trade, making it generally well-suited to price discovery, especially for highly-liquid funds with active two-way markets (bids and offers) and with the creation/redemption processes intact. The market price is set by the interaction of buyers and sellers, potentially with capital market firms (market makers and APs) stepping in with their bids and offers.

FactSet ETF Analytics has long observed and expected that robust markets will value bond ETFs correctly even when NAV and index valuations lag. This month’s decoupling has put that expectation to the test. The pricing gap that opened between Blackrock and Vanguard’s Bloomberg Barclays Aggregate Bond Index ETFs has caused us to revise that expectation. Now we say that robust markets will value bond ETFs approximately, adjusted for transaction costs and uncertainty.

It turns out that “adjusted for transaction costs and uncertainty” is a big deal.

Several ETFs track the Bloomberg Barclays Aggregate Bond Index; the most liquid ones are iShares’ AGG and Vanguard’s BND. ETFs tracking the same index should have the same market returns. This is especially true for funds that trade at high volume, with tight spreads, a two-sided market, and with creation/redemption intact and unimpeded.

In fact, the historic market returns for AGG and BND have been extremely close. But starting on March 11—despite high volumes, tight spreads, robust bids, and an open redemption window—the two diverged. BND started falling faster than AGG with some dramatic gaps. 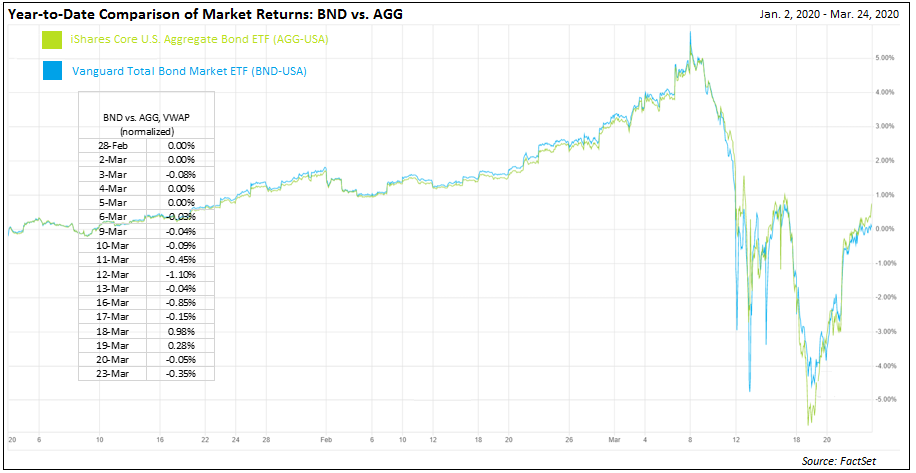 Not the Usual Suspects

When market price diverges from expectations, it’s usually because the market isn’t robust or the create/redeem process isn’t functioning. But that was not the case for BND during the recent bond market volatility. Volumes were high, spreads were tight, bids were plentiful, and the create/redeem window was open and functioning. 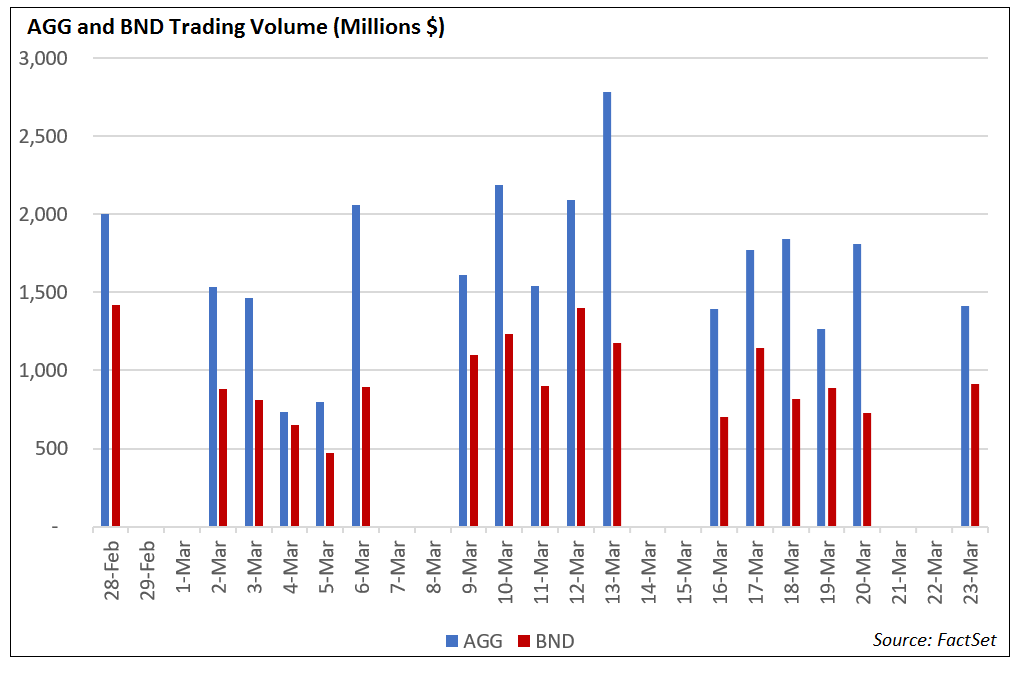 In the opening minutes of trading on March 12, U.S. markets tripped the “circuit breakers” for the second time in a week halting trading for 15 minutes. During the post-trading-halt market re-opening, spreads of both AGG and BND spiked with a second peak for BND. Even so, spreads normalized again within 20 minutes of the re-opening, back to 0.02% for AGG and 0.05% for BND. BND’s time-weighted average spread came to only 0.07% that day —not nearly enough to account for its 1.10% return gap vs. AGG.

A two-sided market—that is, the presence of both bids and offers—is key to price discovery. If bids disappear in a downdraft, prices will plummet regardless of portfolio value. A buyer’s strike could explain BND’s relative discount to AGG, except that there was none. BND had plenty of bids, even on March 12.

For much of the trading day, the number of shares on the bid outnumbered those on the offer. 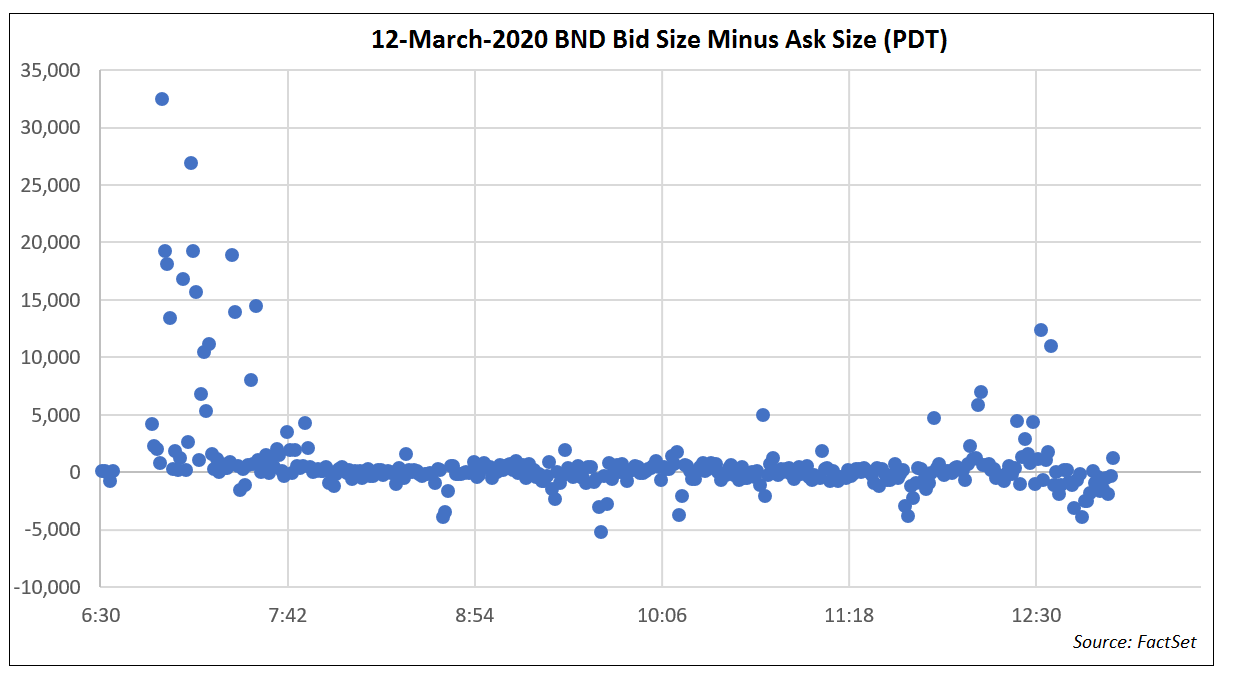 During the minutes after BND re-opened on March 12, bids appeared quickly in response to a low-volume price drop. The chart below shows BND trading on the bid as prices recovered.

The creation/redemption process continued to function normally for both BND and AGG with no redemption halts, no additional redemption fees, and no changes to settlement practices. Both funds processed significant redemptions; ample evidence that the AP windows remained open.

The usual suspects of illiquidity (buyer’s strikes and closed share creation/redemption) do not explain the market returns gap between AGG and BND. The breakdown seemed mysterious.

The mystery is somewhat deliberate as ETF issuers disclose little about their interactions with the AP firms that are uniquely entitled to create and redeem ETF shares. But that’s where the explanation lives.

The key factors that determine an AP’s transaction costs in ETF creations/redemptions are the degree of difficulty in understanding the composition, pricing, and valuation of the redemption basket. Issuers’ personalities—that is, their business priorities reflected in their capital markets policies—are showing up in the ETF market price.

BlackRock’s emphasis on ETF liquidity drives it to support funds like AGG in the capital markets to maintain its status as a trading vehicle. Vanguard’s focus on cost-efficiency, buy-and-hold investors, and its multi-share-class structure lead it to place transaction costs on ETF traders for the benefit of ongoing shareholders.

There is plenty of evidence of the two issuers’ market positioning around these goals, especially in historic flows data (and associated capital gains results) and in their response time following a market reversal.

Blackrock’s AGG serves as a trading vehicle with a steady history of creations and redemptions. Vanguard’s BND has largely served as an asset aggregator and can go months without redemptions. As shown in the chart below, until a few weeks ago, BND had not seen significant redemptions for five years.

AGG’s consistent redemptions have allowed it to avoid passing through annual capital gains. BND, with few ETF redemptions and a portfolio shared with mutual fund share classes, has fewer opportunities for tax management. It is reasonable to assume that tax management was on BND’s portfolio manager’s mind as redemptions began to roll in.

As flows turned negative, it seems that Blackrock’s capital markets practices allowed ETF trading firms to estimate the value of the redemption basket while Vanguard’s practices created some relative uncertainty, and therefore pushed BND’s price returns below AGG’s for a few trading days. As time went by and the pace of BND’s redemptions slowed, the gap closed and even reversed during AGG’s heaviest redemption days.

Focusing on the first hour of trading on March 12, BND’s spreads widened as its price fell, suggesting that anticipated redemption activity increased uncertainty in real time.

If you’re going to be a tactical trader or a panic-seller, you’re better off in a fixed income mutual fund than an ETF because the NAV staleness will work in your favor. If you’re a strategic investor, choose an ETF to avoid subsidizing panic sellers. ETFs isolate trading costs to buyers and sellers, shielding ongoing investors while bond fund NAVs adjust slowly to market changes such that a market slide would render NAV at a premium to an ETF’s trading price. Mutual funds trade at NAV only; ETFs trade for cash on the stock exchanges.

The caveat here is if you must panic-trade an ETF, choose an issuer that prioritizes liquidity. If you can truly stay the course, choose one that manages for the long term.

As Jack Bogle, founder of Vanguard said, “During the past decade, the principles of the traditional index fund have been challenged by a sort of wolf in sheep’s clothing, the exchange-traded fund. But let me be clear. There is nothing wrong with investing in those indexed ETFs that track the broad stock market, just so long as you don’t trade them.”

BND’s underlying index is a float-adjusted version of the Bloomberg Barclays Aggregate Bond Index. The two are largely similar but do have a few minor differences.

Blackrock raised cash redemption fees on the iShares Short Maturity Bond ETF from 0.50% to 2.00% on March 20.

Vanguard imposed variable redemption fees on certain ETFs on March 19, but BND was not affected.